“Art is a language that tells a lot of what’s missing” says Najlaa El-Ageli, curator of a new exhibition in London featuring pop art from 15 contemporary North African artists.

The show running at the P21 Gallery in Kings Cross aims to champion the diversity of pop art culture in North Africa. A strong theme running through the exhibition, the role of culture and art in the political issues within North Africa. 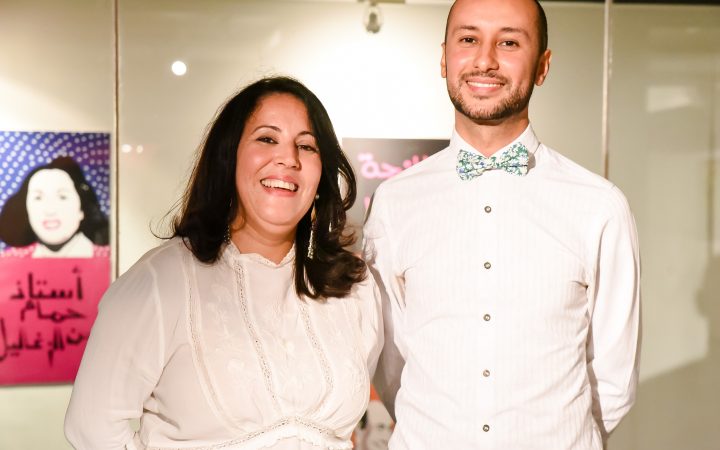 The Libyan British curator is also the founder of Noon Arts, a small private arts foundation which was established in 2012 shortly after the Arab Spring, and which has, since then, curated 11 international exhibitions.

The foundation aims to ‘spot, nurture and support Libyan artists’, but also to introduce Libyan and North African art into a global scene. Naijaa’s project partner Toufik Douib is an independent curator from Algeria. He focuses on bringing ‘Algerian culture to a UK audience’.

All art, whether it’s rock art or classical is created with all types of mediums which represent different stories and the history behind it. “The hand of the government and authorities are monitoring,” Toufik says. This includes the art culture and as a result, there is a lot of talent which has been discouraged from emerging in the Maghreb region.

In late 2010 when North Africa became part of the Arab Spring, it led to thousands of protests against the dictatorship and the lack of freedom of speech, resulting in the fall of decades-long dictatorships in some countries. An art revolution then blossomed in the region, storytelling the events that had taken place.

One development was the birth of Pop Art, especially in Morocco, Libya, and Egypt. Many young people started moving away from the traditional scenery painting and joined the emerging pop art world as a way of expressing and sharing their views. They made social media their main platform for publishing their work.

Toufik explains: “Some artists like independent initiatives and for them, if you do a project with a national museum, it’s like working with the government. They totally try to avoid that. That’s why social media is their main platform.”

When asked why they think it is important to showcase the work now, Najlaa responds: “These artists are working with the public, they’re not sitting there painting. They’re fully politically and socially engaged. The negativity and the backlash of the Arab Spring, has allowed me to have the freedom to do this. I only started with one exhibition that I wanted to show to the world that there are artists that are doing something. I didn’t think that I will actually carry on doing this.”

Artefact spoke to three local artists from the region who have recently showcased their work in ‘P21 gallery for Pop Art from North Africa exhibition’. 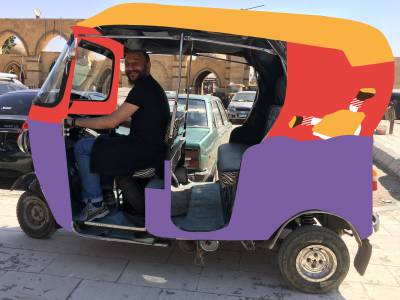 Carmine is an Italian Artist and author who has been living in Egypt for almost 20 years.

“After the Egyptian revolution I had my first solo exhibition in 2011 and in 2012 I launched my first book Masriano. It was quite a success, and it was the first time that a foreigner was writing in Egyptian dialect”.

In the P21 Gallery, Carmine showcased some of his work named Oui Slips.

What is the Story behind the Oui Slips? Carmine says: “It talks about Taharrosh (sexual harassment) and gender because things here are not very easy. Mainly because the relationship here between men and women is very complicated.”

He continues: “They used Taharrosh as a political strategy to send people home. There was this rapid rise in sexual harassment, so people were scared to go down the streets and protest. It’s a mean to a particular goal.”

The Italian artist describes that the complications from the issue come from the ‘Mafia ideology’: “The problem is that we don’t speak about it, and although I’m Italian. I feel the need to address this issues because I’ve been living in Egypt for 18 years, so I feel I have the right to say this.”

It’s clear that Carmine is very passionate about this issue: “To talk about it is a big step in solving it,” he continues. “Ladies should be strong enough to address it as an issue, there is this stigma that ladies should be shamed for addressing these issues, which is why they have to keep it to themselves. Now there are a lot of movements of making women powerful and fight against this big issue.”

When Carmine was asked if he receives any rejection or negativity for his work, he says: “As a foreigner, you have no right to talk about the bad things in Egypt. They’re always saying why you did this and why you did that.” 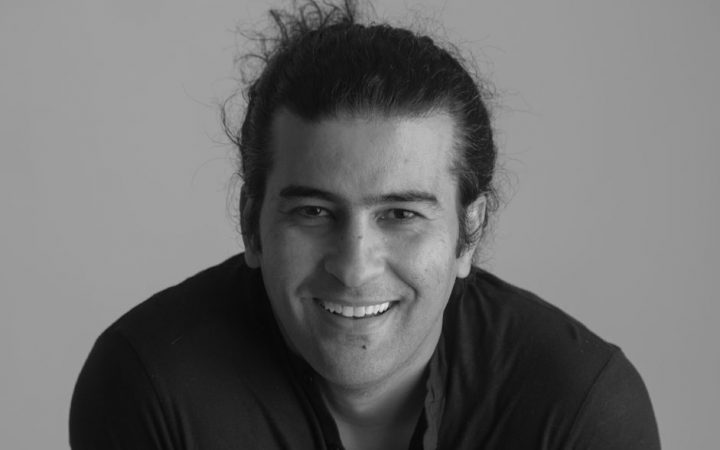 Alla Budabbus is a Libyan civil engineer who followed his passion and became an art director and a pop artist. His work mainly focuses on how East meets West and how much of Libyan culture is influenced by the west.

“People’s response was a total admiration of the work, that raised the question of ‘what is that art? what is pop art in general? And what is it about?’ This is when I decided to launch my page on Facebook to introduce pop art in Libya,” he says.

“I believe nowadays with the vast usage of social media and internet in general, young generations accept diversity in different aspects, which makes it easier for me to share my work on various media platforms.”

When asked what is the inspiration behind your work Alla says: “I grew up in a modern family that is proud of its roots and traditions so that was a hotbed for both cultures”.

From left to right: Prince and Adele, Marylin, Haja Hurryia, all by Alla

One of Alla’s most vibrant pieces named Haja Hurryia features the statue of liberty dressed in traditional Libyan clothing, surrounded by Libyan Pepsi. “Haja Hurryia has its own circumstances where it’s accustomed in third world countries to import materials, Morals, goods and whatever, they re-brand it or rename it including our understanding of the concept of liberty, liberalism, and freedom.” 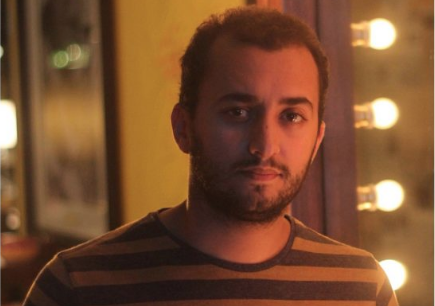 He is a Moroccan contemporary pop artist who has a baccalaureate in applied arts and is now currently teaching art. The inspiration behind his work comes from his “day-to-day life and relationships with other people.”

Unlike the other artists, Mouad doesn’t discuss cultural issues, but he focuses on promoting the Moroccan culture. “I want to make my culture seem funny and cool”, he says. Morocco is globally recognised for its architecture and colourful mosaic art which is embraced by the artistic population.

Mouad’s art is inspired by the idea of sharing peace and explaining that every culture is inspiring from the other.

“Art is becoming a part of the modern lifestyle in North Africa. There is  a number of young collectors who have a passion for art and curious about the story behind my work,” he explains. 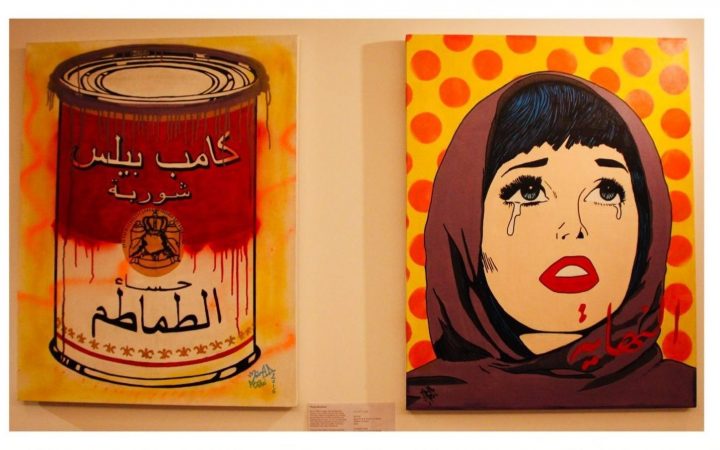 Campbells Soup and The End by Mouad

He has a vision to create a progressive outlook on society which accepts the freedom and rights of women: “My message is we have to give women liberty, which is something I can see already happening, we are living in history.”

Throughout civilisation art is known to be a powerful storytelling tool, but it was unpracticed and almost forgotten before the Arab Spring. This event triggered a rapid evolution. Many new contemporary artists from North Africa continue to emerge and are pushing the boundaries of the art form.

Art culture is slowly being recognised in the region, although in some countries it’s not yet part of the educational system. However, thanks to social media, the lack of formal inclusion is not proving to be a barrier. Najlaa says optimistically: “Art is a movement that is still happening, and social media is the platform where people really speak”.