The power of art

With a can of spray in hand and an open public space, the tight-pants and hoodie-clad muralist passionately graffities away in the open air; openly spray-painting in bubble letterings, while enjoying rowdy music and sliding a few strands of her punk-styled hair behind her ear.

In the Western world, despite women being granted the luxury to grasp every ounce of success and have equal rights and freedom, there are still traces of inequality. Regardless of many advances in other genres, women are still isolated from the world of Aerosol Art.

Few would have anticipated that the mould of the norm would eventually crumble, and in this particular corner of the Bay Area of Oakland, California, an artistic street camp is trying to challenge the male domination that has formed in the graffiti world.

Welcome to the ‘Graffiti Camp for Girls’.

Street Art, or Graffiti being the sole preserve of rough, tough masculinity is now a distant memory. Nina Wright, a punk-styled, free-spirited, youthful, idealistic woman who fondly addresses herself as ‘Girl Mobb’ decided to make a stand to challenge the domination.

“When I noticed that there were only a few females active in the graffiti game, it made me wonder how I could encourage women to be active,” she recalled. The socially normalised idea of street art is instinctively believed to be a hoodie-clad, vandal male lurking through the night with a can of spray paint.

Despite ‘freedom’ being at the very heart of the art, graffiti has also been contaminated and tainted by the harshness that has been directed towards women and their rights by an unjust absurd society.

“We all know that most of the art world has represented men more than women. This is also relevant to graffiti,” declared Alice Mizrachi, a passionate lover of the art. Women’s inequality has always been an inescapable agony. A burdened anguish that has only resulted in women being alienated and withdrawn from whatever evokes an inkling of courage and equivalence. 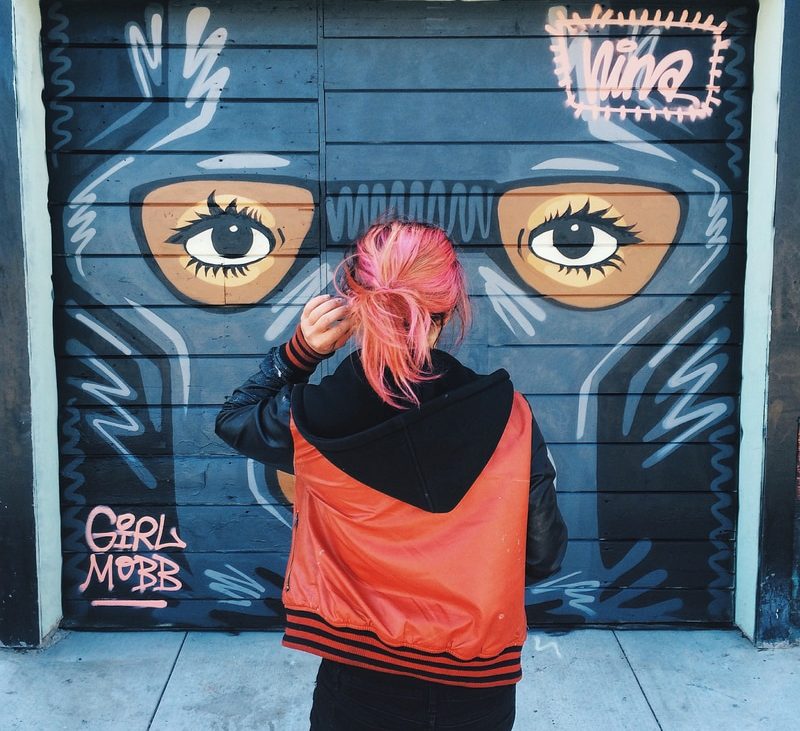 Like many other women, ‘Girl Mobb’ who currently resides in Oakland, California, has been a survivor, as well as an observer, of this forced behavioural culture. The free-spirited soul always wanted to express her talent and passion for aerosol art but still felt unease.

“When I started doing graffiti, I was known as the ‘girl writer.’ I was always pigeonholed as the ‘girl something.’ Nothing else. When I didn’t consider it rare to be doing what I was doing due to my gender,” she exclaimed, “I was always treated differently, as a novelty.”

Eventually, the constant segregation and isolation took its toll and retaliation was the only solution. Seeing only a small number of women being involved in an art exhibition, as well as in street art in the Bay Area of San Francisco, was the final straw.

Fighting for women’s rights and believing that graffiti can be empowering, ‘Girl Mobb’ finally opened classes and provided them with a platform. So the ‘Graffiti camp for Girls’ was born.

“We need to balance the scales because girls need their voices heard. And this is a platform to do just that,” she declared. “This issue is important to me because it reflects the summation of my experience as an artist. A lot of my struggles seemed to be coming from this one angle.”

Alice Mizrachi, another street artist who creates emotive and empowering images, also sees it as a voice for the female genre. “I’m expressing myself through my lens which is a women’s perspective,” she admits. “By genuinely contributing my voice I am encouraging other women to contribute theirs.” 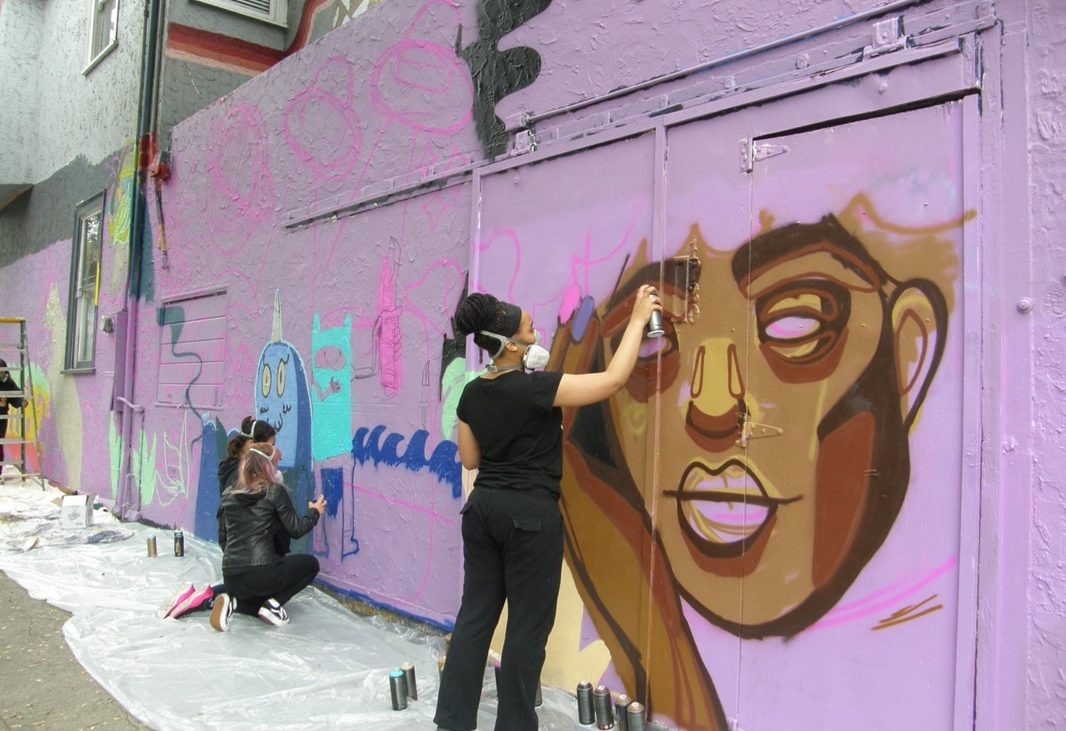 With the help of a regional grant and Girl Mobb’s determination, the lifeless walls have been brightened up, and become immensely expressionist with just the touch and creativity of teenagers.“The outpouring of support I received reinforced my conviction,” ‘Girl Mobb’ explains, about winning the funding.

The camp was launched in April 2017. The one-week course involves students familiarising themselves with the spray paint and learning the basics, then eventually having the confidence to collaboratively come up with a mural design and begin graffitiing away on either the business or gallery walls.

It flourished quickly, with more and more young women ready to take on the rough, tough club of boys and beat them at their own game. “I got to experience something new, and we got to make some cool art for the community,” said Cyndy, one of the participants of the camp, “it was fun, and we had a chance to be creative without any boundaries.”

The success of the camp and Girl Mobb’s willpower to bring equality even escalated beyond expectation. It became inspirational for those who also felt the strain of there being a gender imbalance in the artistic field. 17-year-old girl, Lucia Fressola told A-plus she was immediately captivated by her cause: “I’m all about female artists in male-dominated fields, so Girl Mobb’s been a huge inspiration,” she said. 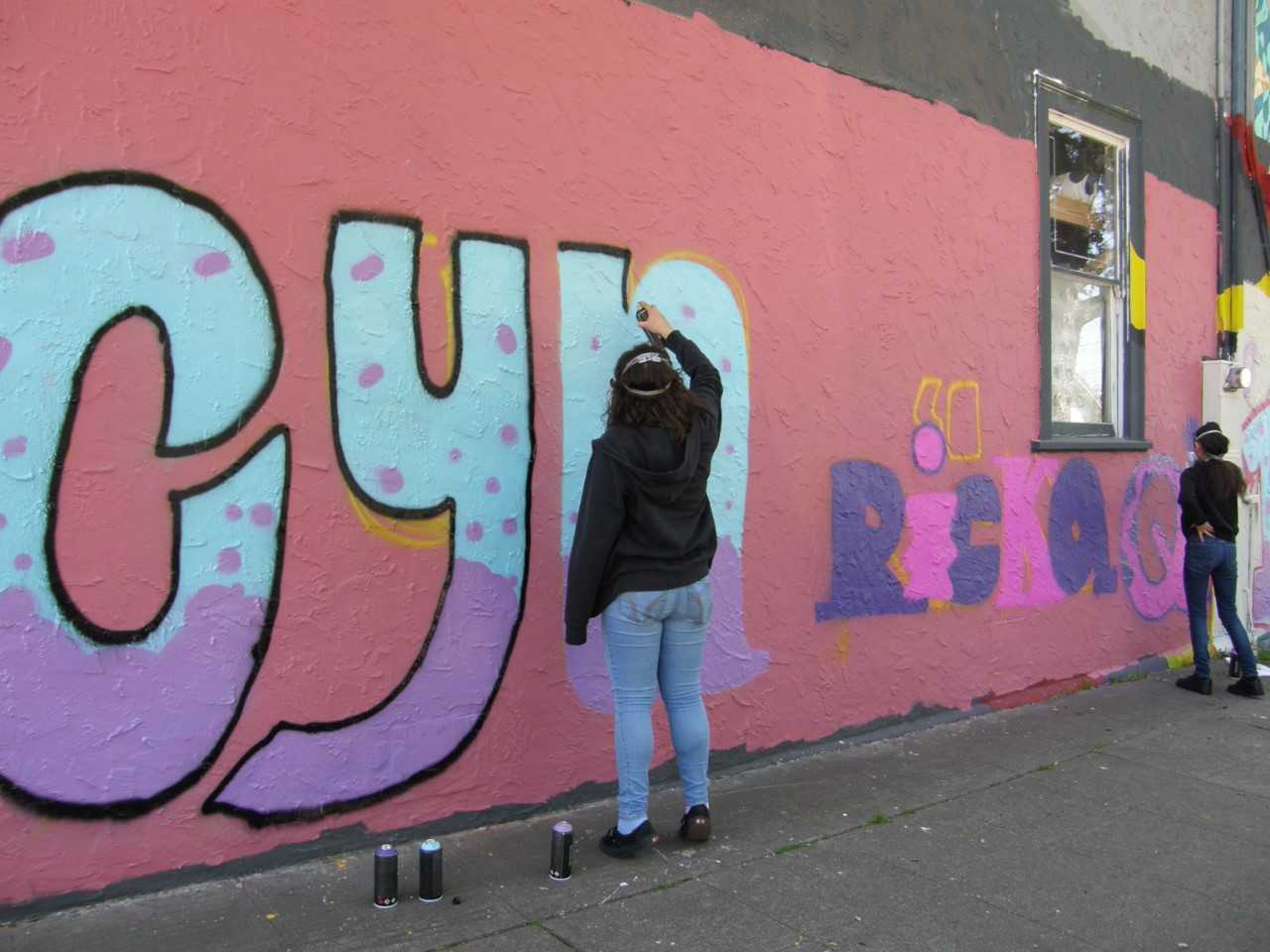 At the same time, the joy and thrill of doing street art is not appreciated by everyone; it holds very little worth to many individuals, including the law. According to one organisation, The Mix, the law considers aerosol art as vandalism and has restricted graffiti lovers from practicing the art just anywhere. This is due to the belief that street art can cause anti-social behaviour.

“Anti-social behaviour covers a wide range of unacceptable activity that causes harm to a community or environment. One of the examples includes vandalism and graffiti,” states The Police UK, a website that informs the public about the law. In support, legal acts have also been introduced.

“The laws on public property are very strict and anyone caught doing graffiti can be arrested and prosecuted under the Criminal Damage Act 1971,” The Mix adds. 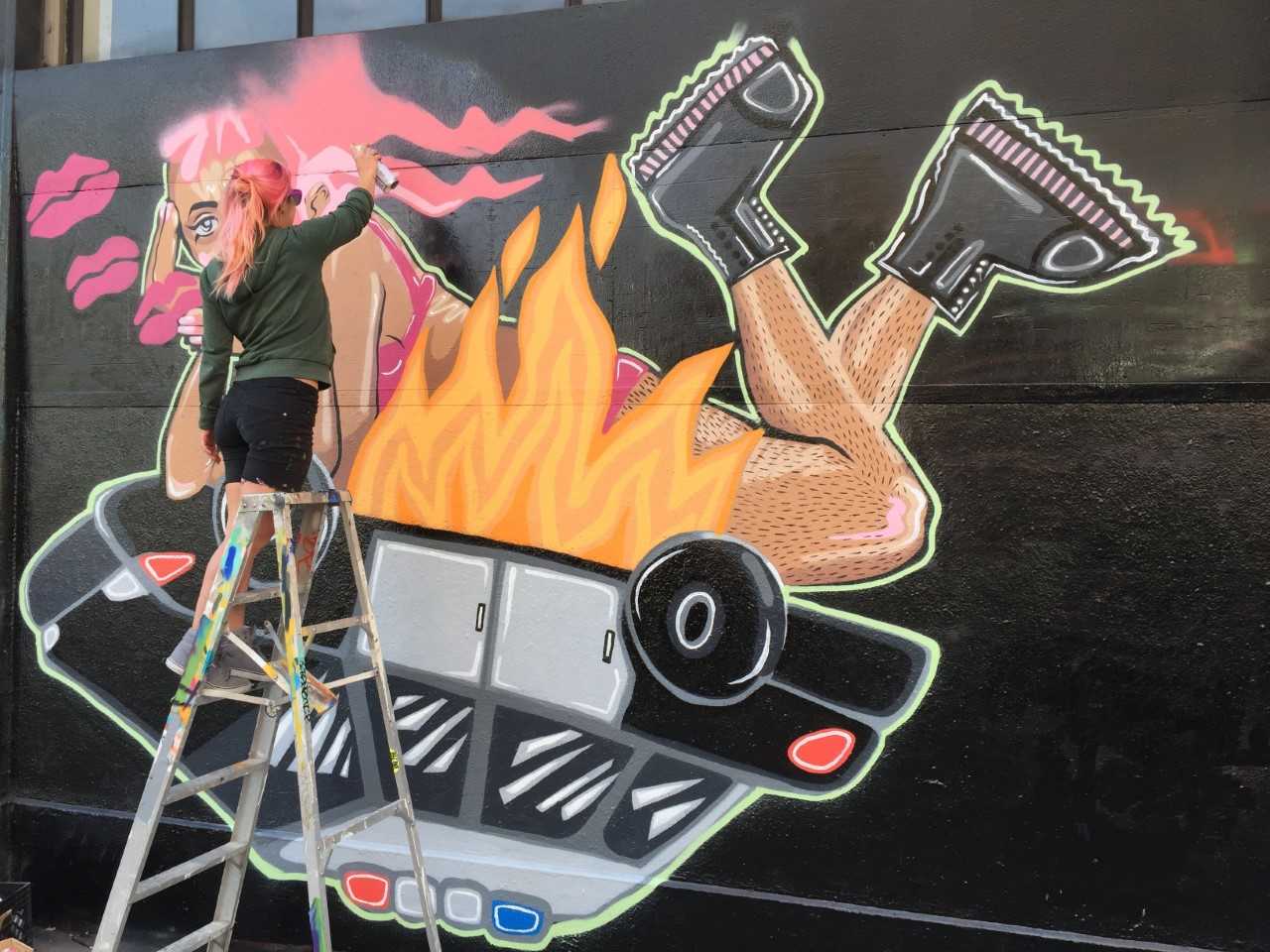 But for ‘Girl Mobb’ street art means having freedom and opportunities. She strongly favours aerosol art and believes that graffiti can give so much to an individual, especially women.

“It takes skill and confidence to create big public works of art. Confidence changes everything; you can’t do or change anything without it,” she explains.

Like ‘Girl Mobb’, Mizrachi also holds the same belief. “The thrill of creating larger than life-size paintings is empowering to me,” she admits.

Now and for the foreseeable future, ‘Girl Mobb’ is determined to continue with her cause and put the graffiti camp on the map. She has already built a large network of female artists and is thinking about inviting them to be apprentices for upcoming murals. Even girls from other countries have visited the US to participate, and ‘Girl Mobb’ herself is planning to go to Cambodia in January.

“My mission is to share this gift and skills to young girls so they can have a leg up in this world. I would say it is having a positive effect. We even have dates for Cambodia.”

And she says she will keep on fighting for the equality of women in the world of aerosol art: “Until we live in a better world where women feel equal to men and have the same opportunities, the goal does not have a finish line,” she firmly declares.

Find out more at: Graffiticampforgirls.com and on @GirlMobb’s Instagram feed.