In a little box of a room, draped in deep-red velvet, full of objects of the past, I am waiting for Enny Gmatic and Martha von Krupp. These are not girls whose parents went a little crazy on the name-giving, but two dancers at which is possibly the world’s most prestigious, ‘adult only’ Cabaret – Paris’ Le Crazy Horse, also known as ‘le Crazy’.

Since its opening, the risqué cabaret has been situated just a few steps away of Paris’ famous Champs Élysées and the Seine, on the Avenue George V, and is home to the crème de la crème of international dancers and performers.

Everything about the two girls fits perfectly into the Crazy Horses’ spirit. They have big smiles on their faces and are graceful in every gesture and move they make, from their posture to the way they position their hands sitting down on the red velvet sofas. They are wearing colourful skin-tight bodysuits, very high heels and the iconic blood-red lipstick.

“I saw the show, and I was like, I have to do that!” Martha has been dancing the Crazy Horse for three years, the black-haired beauty is British and trained in London. French/British dancer Enny, on the other hand, has been at the Cabaret for six years, outlasting the average tenure of girls at the cabaret of about five years.

Ever since the cabaret opened its doors in 1951, it has gained a front row seat in French culture. So much that the show has been broadcasted on Television on the 31st of December.

Alain Bernardin, who founded Crazy Horse, was considered to be way ahead of his time; he took naked cabaret and turned it into something sophisticated by creating the art du nu, glorifying female sexuality and showcasing it as art. At the time nude girls could be found in Paris’ red light district Pigalle, but there they did not dance.

Inspired by American burlesque, Bernardin was determined to create the ‘most beautiful cabaret in the world’. He integrated elements of the New Wave, New Realism, Pop Art and Fashion into the shows, that would revolutionise the industry.

Very quickly the Crazy Horse girls danced their way to become as iconic as the Berghain or Studio 54 with regulars like Salvador Dali and Andy Warhol. 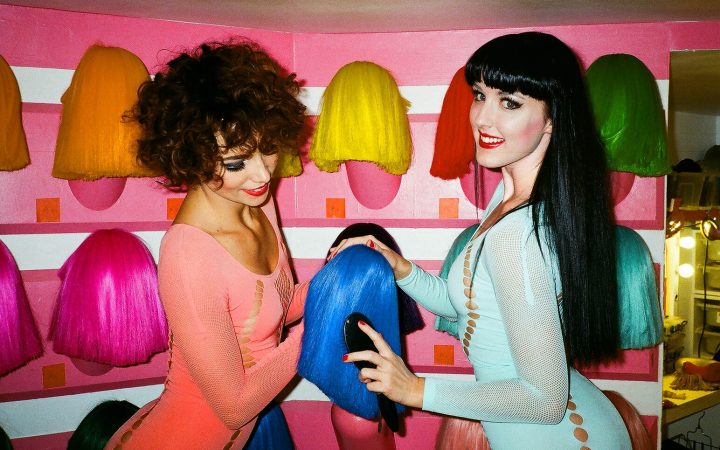 Because of the cultural status of Crazy Horse, the pressure at the audition is double as intimidating for the native French dancers: “Everybody has watched it, like since you are a kid,” Enny explains.

Even though it was intense, without the cultural baggage, for Martha the audition was like any other dancer: “They don’t give you any choreography. In auditions for me normally it is the choreography that freaks me out. Here they let you express yourself how you want, so you just improvise the music, and you dance how you like,” she explained.

The audition for the Crazy Horse is something most would consider terribly frightening and intimidating. The girls come on to the little stage one by one in very tiny little outfits, covering only the necessary and they have to improvise to a surprise song, while a jury of people is carefully watching.

Once accepted, the girls go through a very intense two-month training period in which they mutate into ‘Crazy Girls’. All the girls coming in need to be classically trained in ballet, jazz or contemporary.

The techniques they bring with them are a necessary base to create a new kind of dancer. “We dance on Christian Louboutin heels, which are 12cm high. We arch our back loads during the show. So all your basics of the dancing are completely like brushed away,” Enny explains.

Apart from the intense dance training, the girls are also taught to correctly do their hair and makeup. Hair is a vital part of their stage look, especially for Enny, whose short curls are her trademark.

“Your curls, they’re so iconic, people notice you because of your hair. And your beautiful face and body,” Martha tells Enny and leans back on the couch giggling.

“Enny was my captain when I arrived. She was the one who gave me the note about my hair. She was like ‘you need to take care of it, cause you have got long hair, and you need to make sure not to get foundation on in it, so make sure you keep it nice and away from the foundation, keep it shiny,’” says Martha. Her hair is in fact so shiny I had to double check with her if it is real. 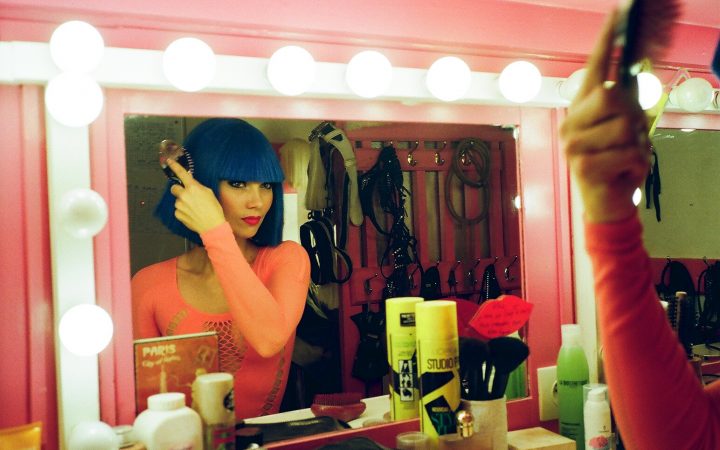 Costumes and collaborations with the designers play an essential role in the shows. Located in the midst of the haute-couture fashion houses Saint-Laurent, Givenchy and Balenciaga, back in the beginning, Bernardin agreed to tone down the outside decorations of his Cabaret in exchange for costumes.

Since then, Karl Lagerfeld, Paco Rabanne, and Azzedine Alaia have all created costumes for the show and Christian Louboutin specifically creates the heels for the girls to dance on.

Unlike at other cabarets, the girls at the Crazy Horse switch positions every night. All the dancers are trained to dance multiple positions and solos so that they can rotate around.

“For me, for instance, when I am going to work, I don’t know what I’m going to be doing in the show, which is really nice, takes off the routine,” says Martha, also explaining that the girls are taught dance parts according to their heights; although all the girls are very similar in height and size, they are still grouped with each other according to seemingly tiny differences.

Martha is 173cm (5′ 8”) tall, and is, as Enny explains, at the limit – any taller and girls would not fit on that little stage: “Alain Bernardin, who created the place considered that little box to be like a jewellery box. And we have always got props on which we are like sitting or dancing around. And it’s like the jewel is the girl,” Enny says.

To the audience, the body criteria make it look like all of the girls’ bodies are identical, moulded in the same form. The iconic guard opening number of the show sees the girls dressed up identically in uniforms, or bits of uniform.

A British officer came to the Crazy Horse years ago to teach the dancers military walks for this. “I saw a video of that, and it’s really scary actually. He is like screaming at the girls and it’s really like full on the real march, the real military march,” Enny says.

“They really want us to blend in the group as like clones. But then when we have got the solos, the girls are so different, so that’s what’s really interesting and unique.” Every solo is also adapted to the dancer’s technique and body shape, and dancers are even allowed to propose and co-create, the girls explain. 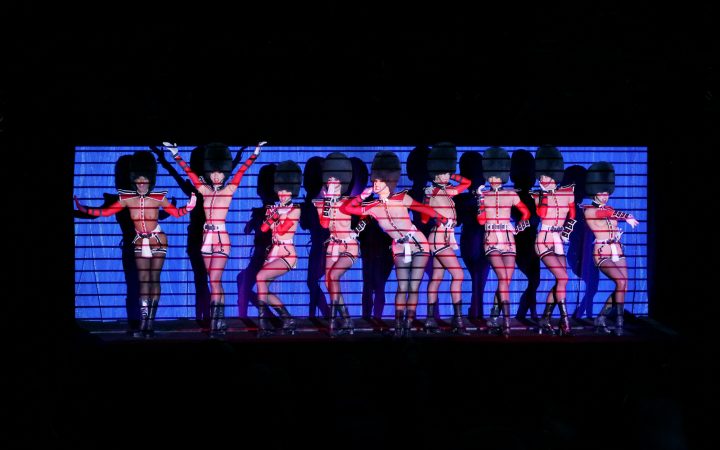 Like any other human being, the girls get stage fright sometimes. “I have this thing where I’m not scared, and when I’m about to go on stage, and the music starts, then I get like a moment. But it’s too late,” Enny laughs, “it’s too late, it’s already happening. And it still happens when I learn a new number.”

When she trained for her first solo a television company came to film it, she recounts. It was a number including a mirror which broke with the impact of her heel. “That was a big panic,” she says.

Martha tells Artefact that her heart was “beating out her chest” just before the first solo she ever did: “Behind that curtain, I could look down, and I could see my heart, I could see my boob get a cup size bigger every two seconds because I was so nervous. I was like, either I’m going to do this, and it’s going to be amazing, or I’m going to die. I’m just going to die on stage,” she explains laughing.

However, the nudity is not something that triggers stage fright: “I mean, I guess in the beginning it was quite breezy, but after five seconds it’s fine,” says Martha. Because of all the pressure and concentration, they usually forget about the nudity altogether.

“I know it was tough for my father at first like to come just because like you know, your little girl is in like a sexy show. But now he is like really proud, and he shows the pictures to like everyone. The whole town knows,” says Enny.

The girls’ families are usually supportive of their career. Some girls’ grandparents even come to see the show they tell me. Martha’s whole family has also come to see the show and loved it. “My brother has seen the show but without me in it,” she makes a funny face and laughs. “But I saw it sitting next to him, and he loved it.” 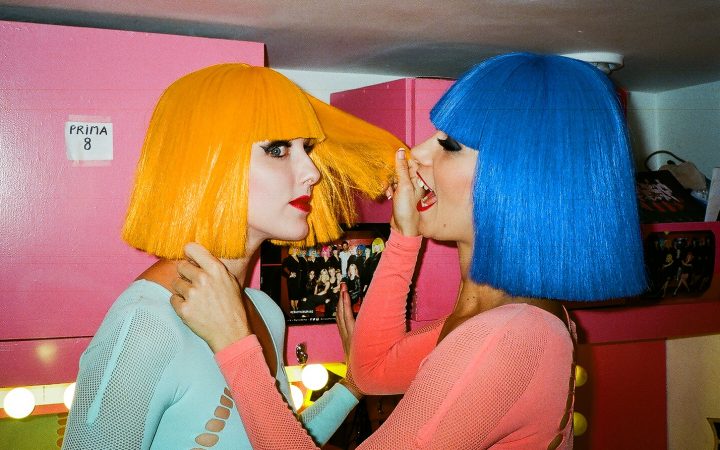 Besides parents, celebrity guests are not a rare sight at the Crazy Horse. Beyoncé filmed her music video for Partition on the Crazy Horse stage, and the girls have danced for the likes of J-Lo, Cara Delevingne and Christiano Ronaldo. Years ago, Enny tells us, the singer Prince even fell in love with one of the dancers and got her to do a video clip.

However, if she could dance with anyone it would be Michael Jackson or Fred Astaire. Enny laughs and adds that she would love to dance with Gene Kelly. “All right, you’ll have Gene and I’ll have Fred!” Martha giggles. 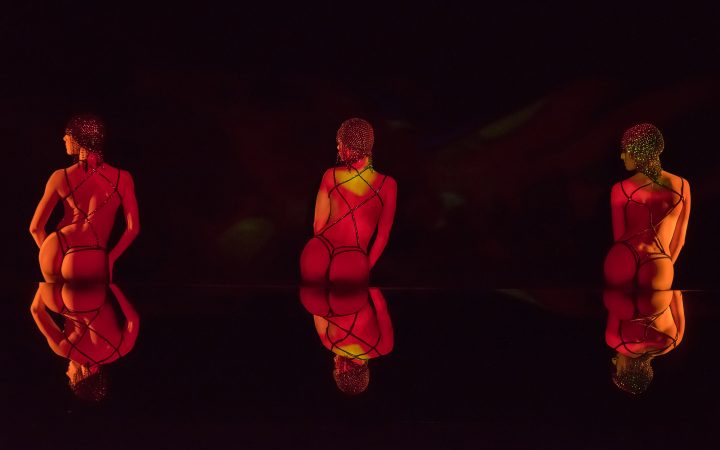 66 years after its opening, the ‘Crazy Girls’ still seduce their audience, now under the direction of Andrée Deissenberg. For 90 minutes once or twice every night, young and old, girls and boys, men and women alike, can be observed lustfully sipping champagne, sitting back in the intimate, dimly lit room, decorated in that same deep-red velvet.