Fake artefacts are something that surround in everyday life but we just don’t realise it; whether it’s paintings, handbags, sculptures or watches, fake is something that makes money around the world – there are many websites, books, and blogs providing advice on how not to get scammed into buying fake items.

But for some people, fake is good enough.

Looking into the value of the fake/the unvalued, in the world, Central St. Martins (CSM) student Kiri Emmerson recently staged an art performance based around fake artefacts and ‘fake realness’. The idea behind the performance was to prove that it is easy to create pieces that look very much like the deal real.

The works closely resembled pieces which could have been potentially found in Egyptian, Scythian, Ancient Greek times; the artefacts looked very authentic, however were just made in her studio with easily accessible tools.

The performance included several pieces which Emmerson presented very professionally such as placing the art on velvet cushions or wrapping them in silk adding to the realness of the fake.

The inspiration for the fake artefacts art performance actually came from a friend who made a funny joke but it got the fine art student thinking about the world of fake artefacts and how simple they can be to recreate.

“I was at this art exhibition opening there were so many people in  amazing designer clothes as they do, milling around at the opening and I was with my friend and she turned to me and I think it was her first time at something like that and she said ‘oh next year I’m going to come head to toe in fake Dior’. It was funny.”

Emmerson then further went on to explain her thoughts towards the fact artefacts in terms of arts and why she felt they were so individual:

“When you look at things like artefacts in museums the artefacts have meaning you know, old, old things with history, with a past behind them that can be linked to certain context, cultural events, certain time periods and often you know they tell us a lot about people or places that we may might not have known another way.” 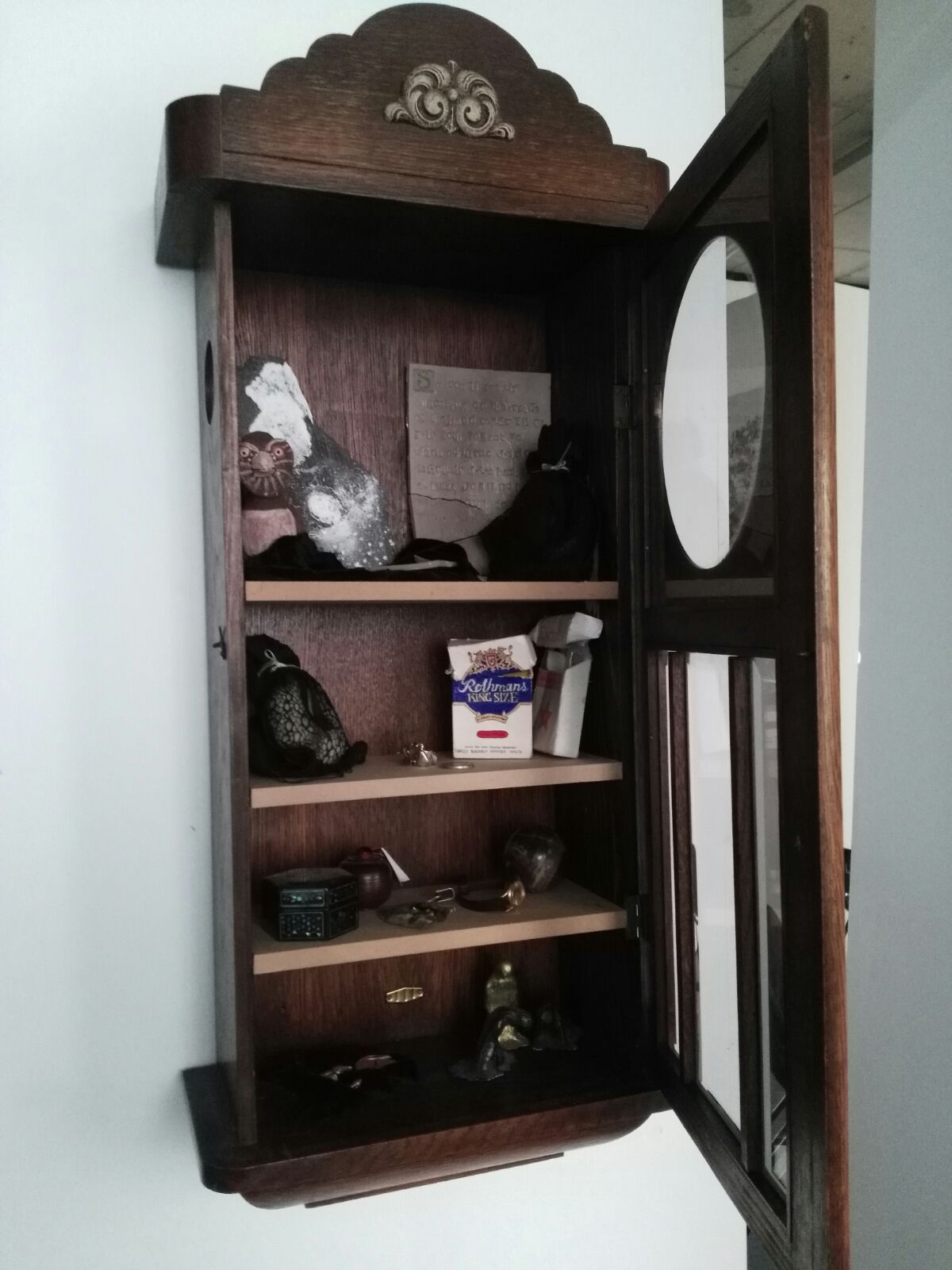 The now third year student has produced a variety of work in her time at CSM but has also previously make fake artefacts. Some of her previous made props and replicas of old objects have been featured in films, pieces such as cigarette packets and an ‘Order of the Red Star’s’ certificate that were used in a Soviet Russia film (made by previous London College of Communication students).

The pieces have been displayed in an old grandmother clock in the style of a 16th century curiosity cabinet: “I know a number of people in film class who graduated last year and I ended up making props for a lot of films and props are really interesting because a lot of the time you’re making something almost exactly as it is in real life, like there’s props in films that function exactly as they do but they are never quite the thing that they are.”

Although many people obsess over having the real deal when it comes to art for others the fake artefacts are just as good even though they don’t have the history and meaning behind the real thing.

“Especially things with text, with script writing on is really amazing. But also, what materials things are made of because it is what those people had access to – how developed the tools that they had were to make these things and when you think about how, how much value these items they hold, they kind of, kind of increase but as time goes on they incrementally increase because we’re getting further and further away from their point of conception.”

One of Emmerson’s pieces was greatly inspired by Hesoid, one of the original ancient classical story tellers featuring lines for the poem, The Theogony. This famous work describes the origins and genealogies of the Greek Gods and was composed in 700BCE.

The Hesoid-inspired piece took main stage during the art show and was presented on a velvet cushion adding to the look of fake authenticity.  To anyone not in the know about their art it would definitely look like a valuable piece.

Emmerson’s engraved with lines from The Theogony

Other fake artefacts in the performance included little totems which are meant to bring good luck, one of the totems was made with some sheep wool from Wales which supposedly is ‘meant to catch evil thoughts in the net’. Many artefacts come with a history of background information, whether they are bring good luck, protect or hold a power.

Although fake artefacts ‘cannot have’ that exact same meaning it doesn’t change the way the connotations it delivers nonetheless. The smaller pieces in the performance such as the one pictured below were all presented in a silk cloth only being handled with gloves on to add to the feeling of the performance, it made the viewers of the show respect the art more and making them seem more valuable.

After being surrounded by so many pieces of ‘fake art’ which look incredible it makes you think about all of the fake items that are in everyday life of today. The majority of people will undoubtedly come into contact with fake everyday at some point or another whether they see people on the street with fake fashion brands, see fake art/artefacts being sold or own any themselves.

Fake is almost becoming so common now that it is arguably more accepted however, the authentic pieces obviously still hold the most value and always will have more history behind them.

All images by Molly Burgess.