Want to make music playlists for a living? 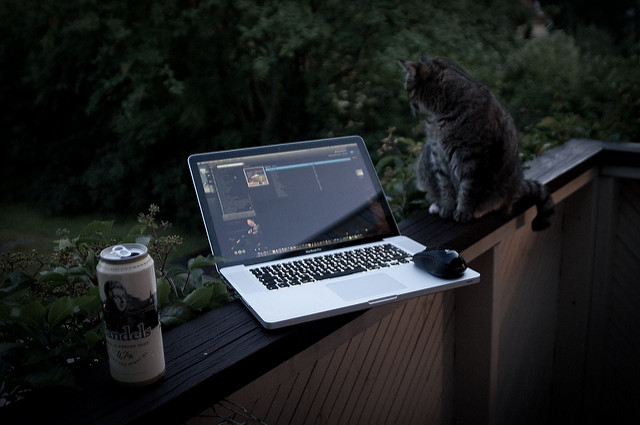 Okay, so imagine sitting down at your laptop, sipping on your tea, listening to music at home, cosy and warm all the while getting paid to do it.

Now, this may seem far-fetched, and we may have oversold it a little, but the point is this: We now live in an age of such media oversaturation that we need to pay people to categorise these mass amounts of data into manageable or listenable lists – playlists.

This is where the playlist curator comes in.

The job isn’t as straightforward as putting a few tracks together. It’s a case of marketing, knowing your audience and having an ‘ear for music’. You can start this part-time, while at school or work, then when enough traction is gained an attempt at a full-time profession is possible. 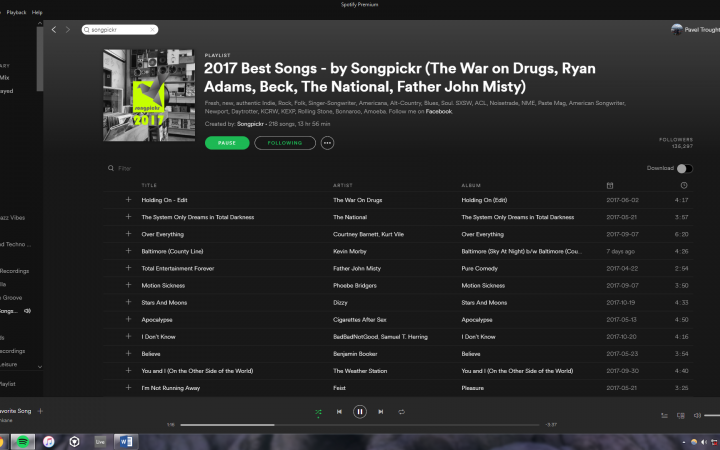 “I was one of the first users who uploaded a playlist, so everybody who went to this (Spotify) landing page saw my playlist. By the end of 2012, I had approx five-to-six thousand followers,” one experienced playlist creator, known as Songpickr, told us.

One way to begin is similar to Songpickr, who started early but with no intention for wide recognition. While you may not be able to be one of the first users on Spotify, you can create a playlist mood which is unique to your competitors.

Phil Lhip from ‘AnotherWayToD’ creates playlists as a hobby after school and work. A particular playlist, Guardians Of The Galaxy Vol. 2, has attracted more than 60,000 followers, precisely showing that innovation, as well as proper marketing (matching it with the release of the film), will attract attention.

‘‘I knew some tricks to gain a bit more visibility organically. I’ve also created playlists that I knew would get a few followers, but I would have never expected so many (Guardians of The Galaxy with 60,000 and another, the Call Me By Your Name Soundtrack with 8,000).’’

So, what are these tricks to increase your following? Well, as Songpickr puts it: ‘‘I don’t like (playlists) to be too mainstream but also not too edgy. It should still appeal to many people.”

This comes down to knowing your audience, understand who you’re targeting and making sure you know the music.

‘‘Of course, you need some hits on top of the list in the visible first 10-20 tracks. When I once featured too many unknown artists in the first 10 tracks, my new weekly users went down by 50%.”

This is similar to radio programming, people like to see familiar names so they can understand what the obscure tracks will sound like – keep the mood similar!

Once you begin to have a following on a particular playlist think about expanding your reach through social media and even your own website.

When adding certain tracks to the playlist don’t be afraid to let the artist know that you have done so. Songpickr goes a step further: ‘‘I follow every artist I add on Spotify, Facebook and Twitter and contact them to tell them that I added a track and kindly ask for a post in return.” This will not only get you engaging with the artist but will show that you are an active member of the music community – ‘a fan not a business’. 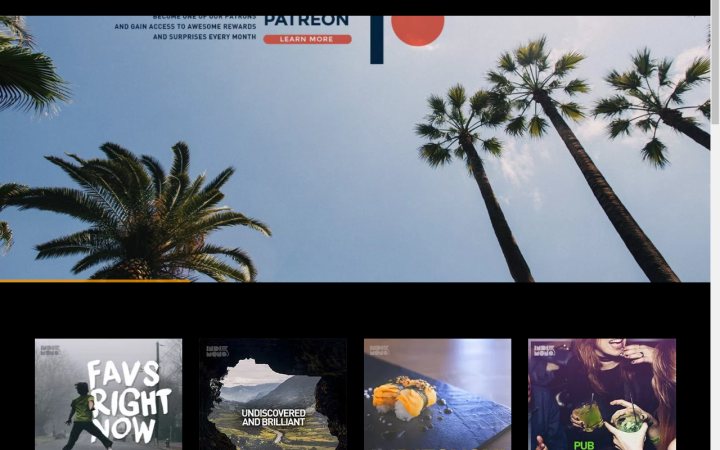 One particular independent curator who has mastered this is Carlos Lopez Casany from indiemono. The website has a set aesthetic, it is minimalist and inviting visually. He points out that Spotify is a dynamic platform that changes constantly.

‘‘These changes of rules make you really aware of the market, your target and the platform; you have to be really into this dynamism to build a healthy growth in followers.”

As Songpickr tells us: ‘‘You need to build a brand off-platform and then try to find other forms of monetisation.”

It’s inspiring to see that although most of these playlisters have gained a vast following through their song selection and branding nevertheless choose not to monetise because as Songpickr puts it: ‘‘Most user-curated playlists are a hobby and people do it because they love music.”

Similarly Phil Lhip: ‘‘I didn’t do it for the money, and I don’t need it, it wouldn’t be fair to the people who followed this playlist.”

Playlist curation, like most music business professions stems from a pure love of music; this is where independent curators stand because it’s this genuine love for the art which allows for informed song selection for the audience.

When the followers grow, and a big business learns of your success they may try to use your influence to promote their own material in exchange for financial rewards.

This system is called payola – it was (and still may be) widely used in radio as a means to pay DJs to play newly released tracks by artists represented by major labels. This practice has shifted to playlisting with dramatic rise of streaming. It’s safe to say that the majority of independent curators strongly condemn the practice.

Songpickr gives a fine example of how a label may approach you – of course, it is then of course up to you to decide whether or not to partake. 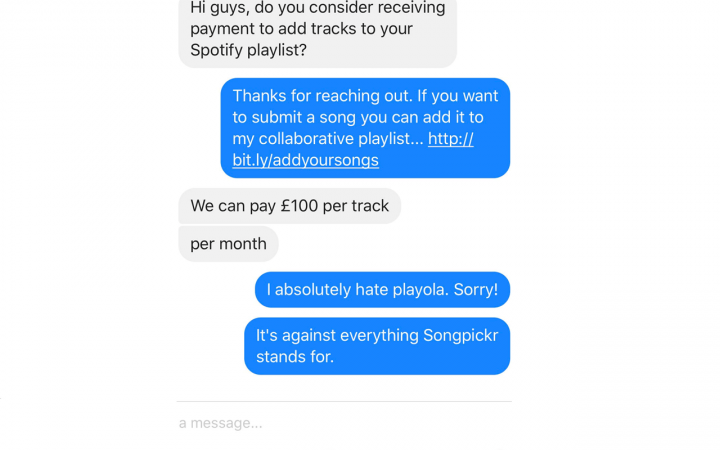 Certain measures can be put in place to limit harassment by labels. If your objective is just to do as Carlos from Indiemono, make music submissions free: “We made our statements about payola, and our free music submission system is also a response to that, so it makes no sense for people to ask for paid positioning.”

When you reach this stage, you are essentially doing the job of an A&R (artists and repertoire) executive at a record label, so you take on some responsibility to find and share content in which you truly believe in. This is a vital part of your image as a curator as well as a certain dedication to your many followers.

‘‘That’s why I strongly defend the role of the independent curators as consultants, and this also can be a potential path where they can professionalise their careers as digital A&R for companies – giving opinion on releases or on signing new projects,” said Carlos.

When a successful brand is built, the next logical step would be to use this brand as a resume for a job at bigger, more involved and better-paid companies. This is the point at which the role of playlist curator becomes a profession.

Why would they need your help you may ask? Well, the big players like Apple Music and Spotify need a new way to distinguish their vast catalogues of music; these catalogues are more effective when categorised, so these companies employ ‘tastemakers’ to do just that.

‘‘Curation is a big thing for us,” Apple Music’s Jimmy Iovine told Wired magazine. This is where you come in, and now armed with a ‘killer’ resumé of a widely popular playlist brand, the job is undeniably yours! Well, almost…

This is similar to the story of Indiemono; although many independent curators never see any real monetisation from playlisting, Carlos has shown his brand to stand out amongst Spotify users.

‘‘In my case, it is a sustainable profession, as I’m working for Sony Music Spain since last year curating their playlists and developing strategies to increase Sony’s catalogue consumption on streaming services.”

Due to the high demand for streaming and the ever-innovating music industry these never before seen jobs are becoming more frequent. If you spot the trends in consumption early this potential ‘dream’ job could be yours. After all, employers are looking for a certain set of skills which are, on the whole, less fluent in traditional music executives.

Carlos had those skills: ‘‘The music industry changes and I had the adequate skills as I was already a curator and a big part of my resumé is the Indiemono profile.”

While working at a major label, or streaming service it would make sense to keep building your own brand, right? There is a useful way to bring a little bit more income from your existing playlists – third-party crowdfunding website.

These are often the best way to know how successful your brand is as well as ensuring your working in the industry in the most ethical way.

Carlos mentions ‘Patreon’ in particular and their benefits: ‘‘Anyone who believes in our vision can support us economically in exchange of some funny and useful rewards.”

It is at this stage that you can retire to the comfort of your warm cosy room and listen to music, yes all the while getting paid to do it. The point made by these curators is that the journey to get there is hard work, but like with most professions if the work is put in the rewards simple – enjoying the job you do day in, day out.