“It’s inevitable that we will have cannabis as a medicine”

Cannabis is a substance many associate with negative connotations. The illegal and criminal aspects such as the selling of the drug on the streets and the stereotypical view that people only smoke or consume it to get high dominate the understanding of cannabis for many.

Cannabis, also referred to as weed, pot, grass, marijuana and dope is the most widely used illegal drug in the UK according to the NHS.

California is a home to some of the most unlikely growers of the cannabis plant who are challenging all of the pre-conceived notions about the drug. The ‘Sisters of the Valley’, also known as the ‘weed-nuns’, grow the substance and produce their products on a farm at their Abbey. They are a sisterhood of women who aim to heal people with cannabis.

They claim on their website that ‘people all around the world are discovering the amazing benefits of CBD’, their best-selling product is their topical CBD salve which accounts for 50 per cent of their sales. The sisters also make oils and tinctures.

One of the nuns at the Abbey, Sister Kate, explains: “We grow plants that have been bred to have the THC [tetrahydrocannabinol] virtually gone and the CBD [cannabidiol] the highest.” This means the plants are under one per cent THC and will not get anyone high.

The sisters say the public have found “it alleviates suffering and promotes health”. The sisters now run a thriving business shipping their products across the world, their products are even available to purchase in London. Sister Kate said: “We sell anywhere from $60,000 to $80,000 a month (£43,240 to £57,650) for all products. This year, our third year of operations, we will break $1 million (£720,000).”

The sisters’ system of beliefs is intriguing, they set themselves apart from other religions and spiritual practices claiming they are ‘starting anew’. Their holy trinity is not the Father, Son and Holy Spirit but rather Service, Activism and Spirituality.

The sisters identify as Beguine Revivalists. The Beguines pre-dated Christianity, they lived together and prayed together however they did not spread any kind of dogma. Whilst the sisters say they respect Christianity and other spiritual beliefs, it is not central to their practices and beliefs.

In a blog Sister Kate reflected on the values of Beguines and the fact that they aimed to rescue women from poverty and provide them with independence.

“The Beguines were around long before Catholicism became mainstream,” she writes, and were focussed on helping women. They grew produce, made medicines to sell and consume themselves and created jobs. Sister Kate says that was their mission which in turn is now the mission of the Sisters of the Valley. 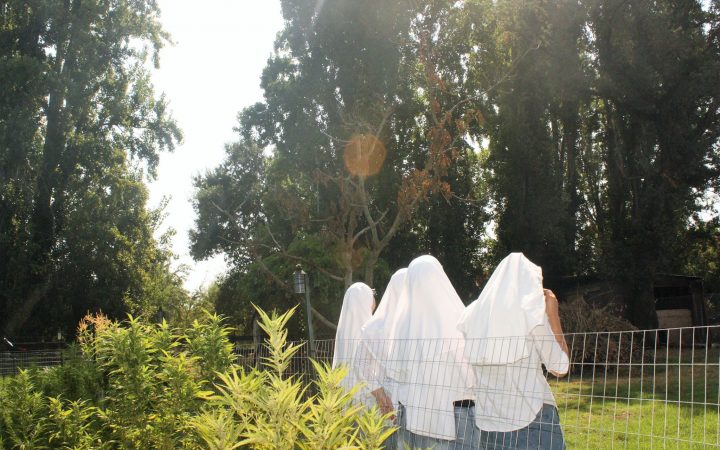 The sisters say they make the products in a spiritual environment. One of them says that their order is self-formed and they are self-declared which brings them a sense of empowerment. The sisters live, pray and work together on their cannabis farm.

America has taken big steps in legalising the drug in the past couple of years. States including Colorado, Nevada and Massachusetts have voted for the drug to be legalised for either recreational or medical use. However, residents in the states who voted for recreational use may have to wait until the law comes into effect to legally purchase cannabis this year.

People living in states where the drug was legalised for medical use will need to be in possession of a medical marijuana card issued by doctors who determine whether the drug could help benefit a patient’s health condition.

Business Insider claims that in the US the industry could generate sales of up to $20.2 billion (£14.6bn) by 2021. California was the first state to legalise medical marijuana over two decades ago.

Californians passed Proposition 64 also known as the Adult Use of Marijuana Act last year meaning that recreational use became legal. Medical weed dispensaries in the state will be able to sell the drug for recreational use in 2018 until then people in California still need a medical marijuana card.

The Sisters of the Valley recently featured in the ITV programme Gone to Pot: American Road Trip which saw celebrities from the UK visit the US to try products containing Cannabis. Viewers were able to witness the sisters produce the products on their idyllic and peaceful farm. The celebs were thrown into an environment that was worlds apart from here in the UK. 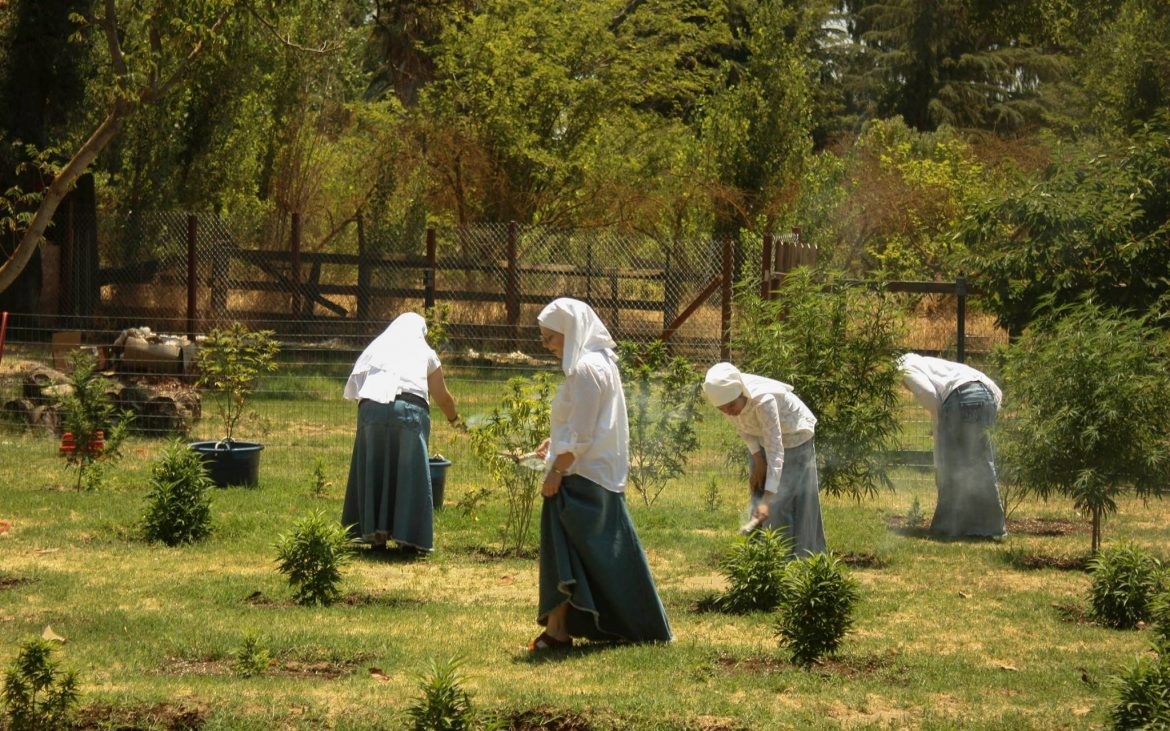 Statistics published by the Home Office Crime Survey for 2015/16 stated that around 2.1 million people aged between 16 and 59 used the drug. Cannabis contains active ingredients known as cannabinoids. Tetrahydrocannabinol (THC) and Cannabidiol (CBD) are two well-known cannabinoids.

Cannabis is often credited and known for giving people a feeling of being ‘high’, a sensation experienced as a result of the THC element of the plant which affects psychic activity in the brain. Currently in the UK people are free to purchase substances containing the CBD element of cannabis which does not affect psychoactivity. Anything from tinctures, oils and vapes can be bought both online and in shops.

Despite the fact that Britons are currently free to use and consume CBD products people want to take this further and thus are fighting to legalise cannabis for medicinal use.

Labour MP Paul Flynn is one of those people, he is passionate about the legalisation of medicinal cannabis to help people in need of relief. He has campaigned outside Parliament and urged other MPs to back his commons bill.

Flynn brought forward a Private Members Bill in the hope of changing legislation. He told Artefact: “Political cowardice is preventing the development of a sensible drugs policy in the UK which the Bill aims to put right.” 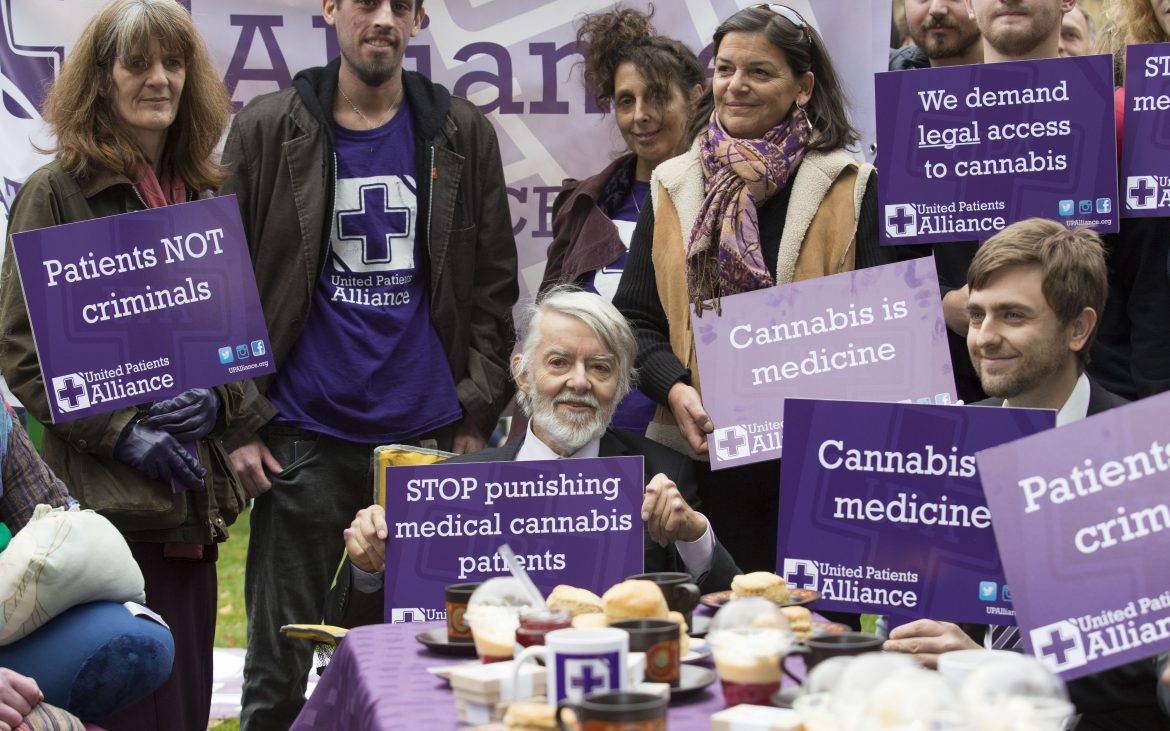 In a recent speech Flynn stated that the Bill will be brought in to allow the production, supply and use of cannabis resin for medicinal purposes and anything connected to this.

He raised important issues suggesting the drugs be taken out of the hands of criminals and scammers that many of the people who are in desperate need of relief of their medical problem may resort to. Instead, he wants to place more power and authority in the hands of doctors.

He spoke of people who had relieved in some cases debilitating symptoms with medicinal cannabis and under current laws could have received prison sentences for five years for doing so.

The Multiple Sclerosis society provided Flynn with a statement giving its support towards the Bill. Flynn adds: “With regards to CBD, the whole cannabis plant has over thousands of years of human use proved safe.”

Flynn refers to the Bill in his speech as the ‘Elizabeth Brice Bill’. She was diagnosed with Multiple Sclerosis at the age of 26, a woman of many talents formally working as a television producer and credited with translating the Noddy books into Latin.

Her illness not only affected her life but that of her young family. After a decade of using medicinal drugs for the condition, she discovered one drug that gave her relief from her spasms. That was cannabis.

Cannabis was used as a medicine in England until 1973. Brice campaigned for many years for medicinal cannabis to be re-legalised before she passed away in 2011.

Flynn paid tribute to Brice calling her a “remarkable lady.” He added: “She came to this house and had a cup of Cannabis tea on the terrace.” 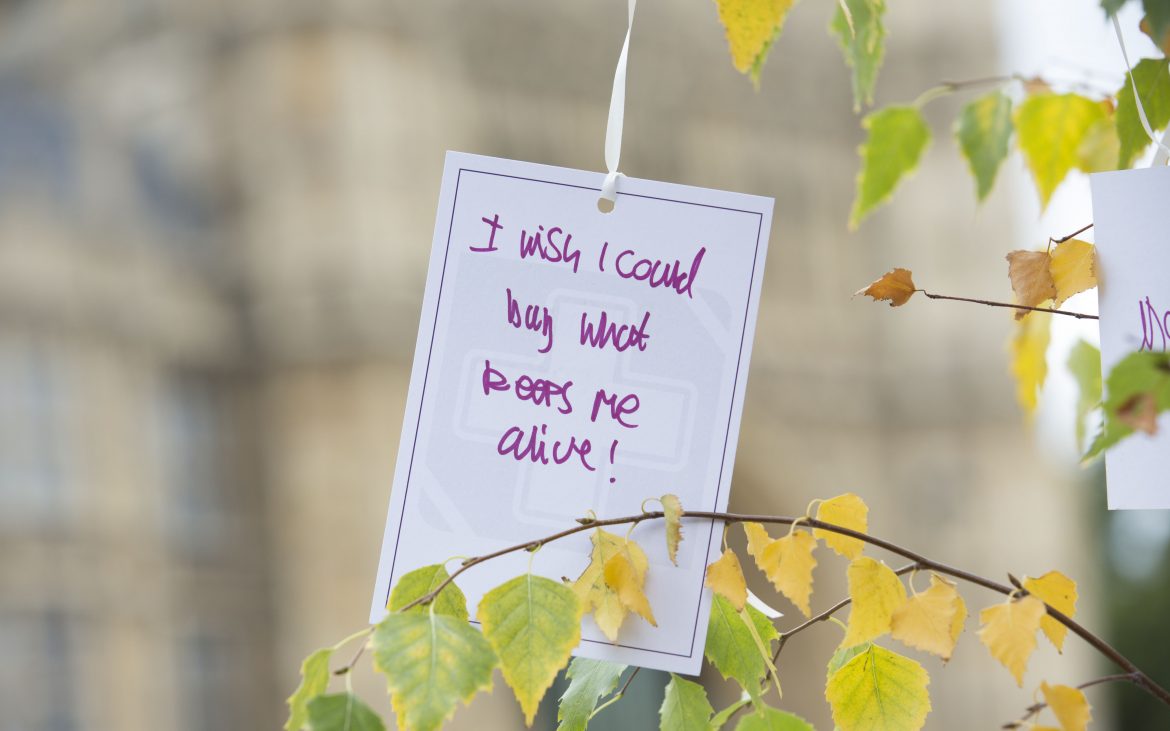 Flynn described a police woman suffering from multiple sclerosis, she told him that she was having to purchase cannabis from the criminals she once arrested. He believes that there are lessons to be learned from all the states in America who have taken the legalisation step.

The MP is the patron of the United Patients Alliance (UPA) which was formed in 2014 in response to the fact that there was not enough focus on the legalisation of medical cannabis.

UPA’s political director, Jon Liebling, says they started out as an activist group lobbying but now supports people suffering from illnesses with most of their members being patients themselves. “Over one million people in the UK today’s primary reason for using cannabis is medical.”

Liebling has dedicated a lot of his time to research: “I have been doing investigations into CBD to provide patients with good trustworthy companies.” The quality of the products is something he says is a big concern, the market in which CBD is sold is currently unregulated however he hopes the market will improve. He believes there so much more research to be done.

“THC and CBD are the first two cannabinoids we have researched however there are 100’s of cannabinoids that people could benefit from.” Liebling spoke of the stigma and negativity that surrounds the term cannabis, “an awful lot of people look at this market and see it as a cannabis market”, and added “people don’t learn about it or understand it.”

The advances of the US bring two questions, is there a future for cannabis in the medical industry and are the UK still too far behind in regarding the substance as a serious medicinal product?

Flynn believes the UK needs to catch up with the rest of the world. “The tide of world opinion is moving in the direction of legalising cannabis.” 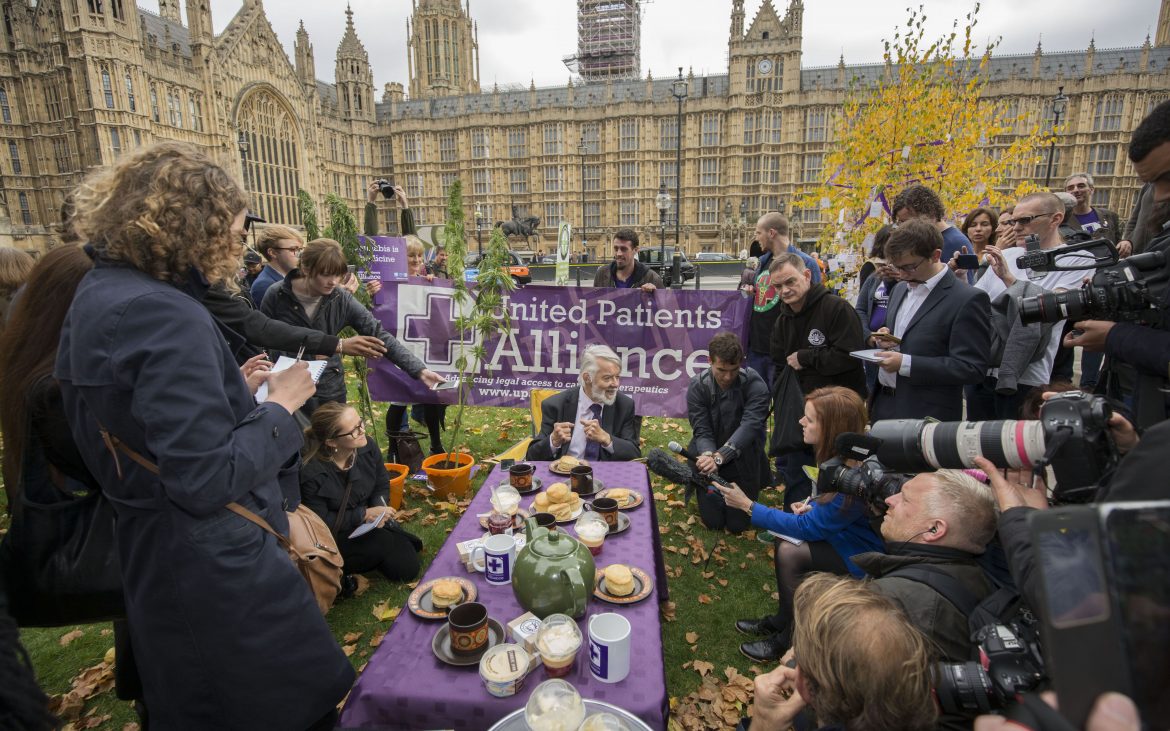 Cannabis tea was served at a protest in Westminster [Tim Anderson]

Sister Kate described cannabis as “Mother Earth’s finest medicine” whilst Flynn refers to it as “the oldest medicine in the world.” If cannabis is a revolutionary, new way of helping people with health conditions why are we not welcoming this in the UK?

Liebling is in agreement with Flynn: “Britain is way far behind.” It is clear from talking to Liebling that he is incredibly optimistic about the future of medical cannabis the UK, when asked if he feels there is a future he replies: “without a shadow of a doubt,” and adds: “It’s inevitable that we will have cannabis as a medicine … we are seeing a great deal of change behind the scenes.”

He speaks of the growing attention towards the Bill: “We are starting to get inquiries from government ministers due to Paul Flynn’s bill and campaign.” He says: “If the government support happens things can change.” He believes we could have a better view on the future of medical cannabis in the UK this year.

With the US currently flying the flag for medicinal cannabis and its benefits, Flynn believes it’s the UK’s turn: “It is time for us to lead public opinion rather than following it.” He believes it would be both courageous and compassionate for to pass the Bill.

Maybe it is time for Parliament to finally pay attention to the growing argument that the pro-medical cannabis community raises, Flynn’s Bill is expected to have its second reading in February. Until then the future of medicinal cannabis in the UK is still very much uncertain.