Straddling the line between Autumn and Winter, Halloween is the time of year to celebrate pumpkins, witches, as well as November 5, also known as Bonfire Night.

In the past, the dying days of October in Great Britain were usually spent eating caramel apples, setting off fireworks and building bonfires in your garden or local park. People would gather around watching a stuffed dummy portraying “Guy” burn in a bonfire while waving sparklers around and struggling to stay warm in England’s shivering weather.

Today, though all we seem to care about is who we’re going to dress up as for Halloween.

Halloween is a popular holiday. It’s one of those rare holidays where celebrating the lead-up is just as exciting as the actual day. People idolise it by deciding their outfits months in advance and decorating their houses weeks before as it if it were Christmas. These ideas might sound foreign on this side of the Atlantic, but in North America, it’s second nature.

The excitement of Halloween seems to be rising every year in the UK, however, so much so that the buzz around the traditional holidays, such as Bonfire Night, seems to be shrinking in a pumpkin-shaped shadow.

Halloween is making a name for itself in the UK but dressing up is a small part of the reason. According to Mintel’s Global Market Research and Market Insight, Halloween is one of the largest commercial holidays, overshadowing the sales of Guy Fawkes. The candy-infested holiday is becoming one of the biggest retail events of the year, and the markets can’t afford to stand still.

Mintel estimated that the sales of Halloween goods reached £320 million in 2017 representing an increase of around 3.2 per cent on 2016. Samantha Dover, Senior Retail Analyst at Mintel, forecasts that retail sales of Bonfire Night products will rise 3.8 per cent year-on-year in 2017, making the market worth an estimated £55 million, so Bonfire Night is producing £265 million less than Halloween merchandise.

Consumer spending on Halloween continues to grow driven both an increase in the number of consumers taking part each year and increased average spending. To put this into context, Mintel’s consumer research shows that 46 per cent of consumers spent money on the event in 2016 up from 33 per cent in 2015.

The supermarkets continue to capture the most Halloween spending in the UK. The supermarkets’ value proposition often resonates with consumers, but beyond pricing, most of the major supermarkets have been investing in both in-store and online experience to engage seasonal shoppers, with online content designed to inspire, alongside increased retail selling space and seasonal events such as pumpkin carving classes in-store.

Interestingly, Mintel claims that Millennials and parents tend to drive Halloween purchasing. Millennials have been particularly key to the growth in the market, spending money on less traditional categories like fashion and cosmetics. 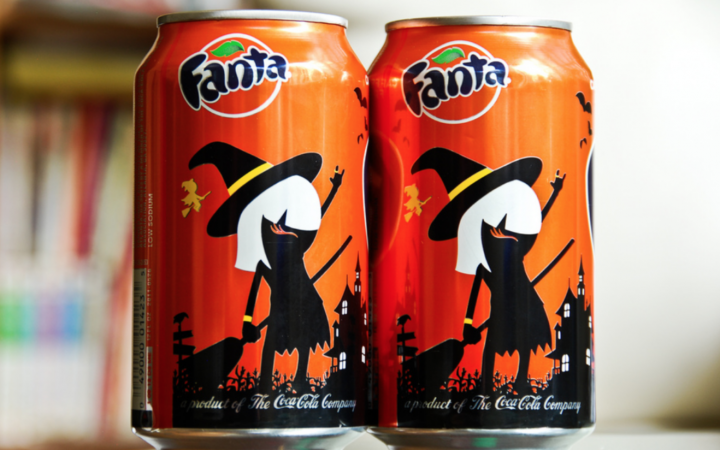 Popular corporations, like Coca-Cola, have also become aware that millennials have been a driving factor towards Halloween based on their sales, so they have taken advantage of their targeted demographic. Fanta has created their largest Halloween campaign yet, including VR and specially allocated Snapchat filters creating an exciting experience. Their slogan this year being “This Halloween Grab Some Fun.”

If you look close enough, almost every market has taken advantage of this major Halloween blowout. I doubt there was one café that didn’t sell a ghost or witch-shaped cookie. Even Starbucks created a special zombie inspired frappuccino.

There is also a resonance with children looking forward to taking home a bag filled with candy. Around 84 per cent of mothers this year planned on celebrating Halloween with their families.

Trick or treating has taken off massively over the last five years and we see that with sales. Although many consumers have been spending on a more varied range of Halloween products, the market continues to be driven by confectionery.

In 2016, Mintel found that more than a third of UK consumers bought sweets and chocolates for Halloween. Pumpkins also continue to be a popular purchase at this time of year, making pumpkin carving a family-friendly activity.

Halloween is a festivity that can be enjoyed by everyone, which also makes this high demand holiday so popular. The Non-Stop Party Shop down High Street Kensington London, says they don’t have a specific market of people they sell to: “We get all ages. People from six months to 80-year-olds. People spend more than £100 on Halloween items alone.”

In North America, the Halloween culture is massive. People will celebrate it no matter what day it falls on. It’s like you don’t have a choice. Stacy Hall is a woman who truly knows how to celebrate Halloween. Every year for as long as she can remember, she has been hosting a Halloween party at her house in Bowie, Maryland, each year with a different theme. Her parties are the talk of the town and friends and family rave on “how will this party top the last.”

This year her party has been in such high demand she had to move it from her house to a small warehouse. She took advantage to start charging entry and raising money for charity.

“I love to be able to one dress up and transform my house into something that’s not normal. The fact I can transform my house without any judgment. The holiday itself has no significance to me but the fact the whole transformation. People don’t usually live in the woods or a circus tent so the fact I can put on a show for people and not be judged for it but praised makes it all the fun. People being able to dress in characters for an event or day to be someone you’re not on a daily basis. You get to hide away from the world,” Stacy said.

“I spend so much money producing one of my parties. I start saving early for them. But in the long run, the cost is worth the experience and memories.” 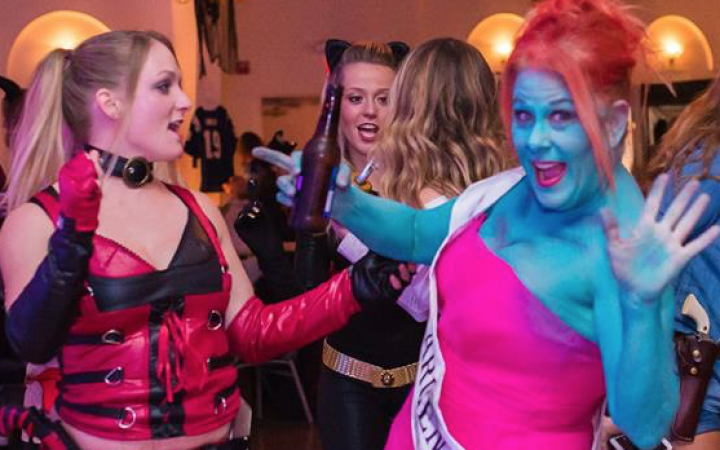 Even in American, this spooky trend is dependent on sales. Michael’s is a craft store located in North America and the staff revealed that they specifically push sales weeks before Halloween to make more money. You’ll find skull shaped pillows and cobwebs up for 50 per cent off the first week of October.

One cashier spills the secrets by saying, “Even though they’re discounted we sell more, therefore making more money. If a customer sees the words SALE they tend to buy in bulks. So instead of buying two pumpkins full price they end up buying six on sale, which in the long run ends up costing more than two full price items.”

Besides economic reasons, there is a fact that the world is fascinated with American culture and people want to emulate it. Today social media has a downward spiral pull on our thoughts and has a big part in promoting Halloween. It has changed the effects of what is in or out and people always want to follow the trends. Many celebrities have dynamically embraced Halloween.

This year Kim Kardashian wore five different costumes. Heidi Klum is also the talk of the town being known as “The Queen of Halloween” where her costumes get their own columns in publications like The Daily Telegraph and Vanity Fair – where elites and celebrities lead, we tend to follow.

You also have a whole generation of people who grew up watching American TV and seeing the Halloween specials on American TV shows. People are saying “Why did I never get to do that?” and so they are doing it for their kids or themselves to fulfil a growing fantasy.

“I do think social media has more to do with Halloween because you follow people from all over the world not just where you’re from,” says Shelby Hall, a 21-year- old who’s been born and raised in America.

“I have lots of English followers on Instagram because one of my best friends is from Leeds. They see me celebrating Halloween every year and see it as something they want to do.”

Shelby also points out the idea that Brits love a good themed party. “I’ve noticed that in British culture no matter what, they love to dress up and have themed parties, so Halloween just adds another reason to dress up and celebrate.”

According to the employees at Non-Stop Party Shop, people aren’t forgetting Bonfire Night but combining the two with parties. One of the workers admits to the lack of firework and sparkler sales the store has been having.

“Fireworks sales are down. People are opting to go to the big displays rather than doing themselves.” Alongside this, safety restrictions have also have played a toll on the lack of sales. It used to be a 5-meter safety distance to set off some fireworks in London, now it’s an eight metre safety distance, and who has an eight metre-long garden in London? 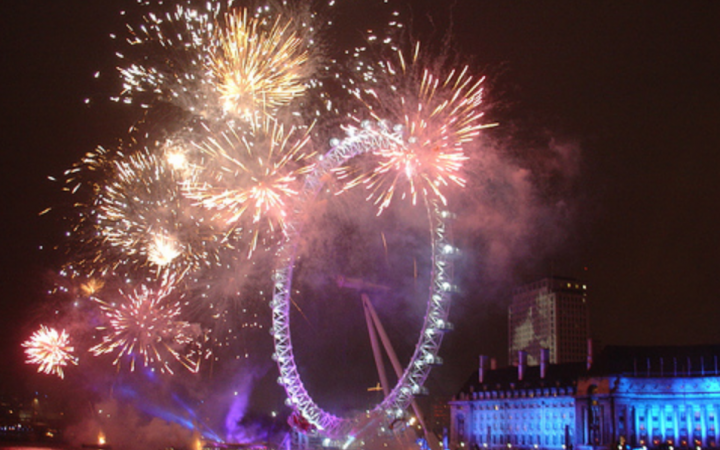 Bonfire Night is still an important event for many UK consumers but it is significantly less. You have to remember that just because Halloween is making more money than Bonfire Night doesn’t mean it’s more important.

This isn’t an extensive political debate, but cultural text holding up the status quo. But for some people, they do miss the impact Guy Fawkes used to have back when they were growing up. Richard Tiltman, who is in his mid-sixties born and raised in London, told us he misses traditions such as ‘penny for the guy’, (an idea in which children would take their ‘Guy’ effegy around the neighbourhood asking for money to buy fireworks), instead of trick or treating.

Holidays can be crucial when they celebrate symbolic cultural events that link us to with our extensive communal values; that’s one of the reasons Bonfire Night will always resonate with the people of England, especially London. And when it comes to Halloween? Everyone has a darker side to them, and when it comes to holiday, it gives people almost a permission to act on that side, whether it be scary movies, scary costumes, or scaring other people.

As for next year? Unfortunately, it would be difficult to give an estimate how Halloween will be celebrated or even how people will spend next year. A lot can happen that could impact how consumers spend, particularly as the UK is facing rising inflation and consumer confidence is weakening.

Analysing Mintel’s historical market growth data, average sales have risen by around 8 per cent year-on-year. However, growth has been slowing and we expect it will much lower than this. The timing also has a significant impact on growth and in 2018 Halloween falls midweek on a Wednesday, which will hinder sales as growth is typically stronger when the event falls on a weekend. Evidence backs this up when Halloween truly skyrocketed in 2015 when it fell on a Saturday.

Halloween has been growing year after year with the help of American culture, marketing, and sales. In 2020, Halloween will again fall on a Saturday and who loves a weekend more than Halloween?

There will be no excuses to not go out and play and by then who’s to say the UK won’t be celebrating it the American way. So, remember, remember and start thinking of a memorable costume, because it’s predicted to be a Halloween you won’t want to miss.