Brown womens’ culture is not a white woman’s accessory 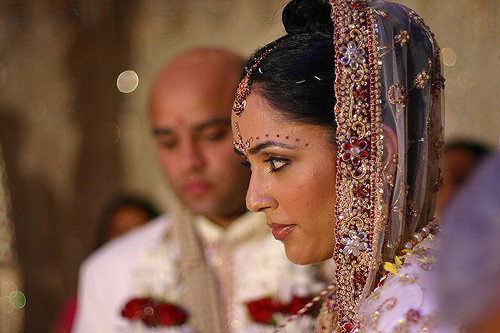 The bindi is traditionally a red dot worn in between the eyebrows by Hindu or Jain women. It represents the third eye of spiritual sight. It is also worn when women get married to show commitment to the long-life and well-being of their husbands.

During all Hindu marriage ceremonies, the groom applies sindoor in the part (or parting) of the bride’s hair. Some non-traditional bindis are worn by younger Asian women during religious holidays and weddings as part of their traditional dress.

However, in more recent times the bindi has been worn by non-Asian white women, often as part of their festival looks or in YouTube tutorials. Celebrities like Kylie Jenner, Iggy Azalea and Gwen Stefani have donned bindis for their music videos, festival looks and even red carpet events.

Many believe that wearing a bindi ignores the religious and cultural history behind it and that such actions are cultural appropriation and causes offence to many Asian women. It allows people to wear a bindi and yet remain prejudiced or at least complicit to its people and the injustices that they face.

Iggy Azalea in her music video for Bounce in 2013

“The religious or cultural significance of South Asian aesthetics is quite vague at times and is often multi-cultured; a few cultures outside of South Asia wear bindis, for example, such as in South East Asia,” says Sharan Dhaliwal, the founder and editor-in-chief of the magazine Burnt Roti, which was founded in 2016 and focuses on celebrating South Asian talent.

“Whether there is cultural significance or not, the main issue here is the erasure of a culture which is usually discriminated against. By adopting aesthetics, but erasing the culture it’s from, you’re essentially choosing what suits your privilege at the time. This includes South Asians adopting black culture aesthetically without actively using their privilege to fight alongside them,” Dhaliwal told Artefact.

During the 2013 MTV Movie Awards, Selena Gomez performed her single Come and Get It. While performing the song Gomez wore a bindi, South Asian dress and used Bollywood-themed choreography; the song itself has a Tabla beat and Bollywood themes.

Gomez received criticism from Hindu statesman Rajan Zed, who said: “The bindi on the forehead is an ancient tradition in Hinduism and has religious significance, it is also sometimes referred to as the third eye and the flame, and it is an auspicious religious and spiritual symbol.”

Gomez defended herself, saying: “I think the song has that Hindu, tribal feel and I wanted to translate that. I’ve been learning about my chakra and bindis and the culture — it’s beautiful.”

She continued to perform the song wearing a bindi with typically Bollywood moves and South Asian dress. She performed on Ellen, Dancing with the Stars, The Billboard Music Awards and at the Radio Disney Awards. Later in the year, she posted a selfie to Instagram wearing a bindi drawing further criticism.

Cultural appropriation has been heavily discussed on social media in recent years. While some say that it is all part of multiculturalism and wearing things from other cultures is a way of embracing the other culture, people fail to realise the struggles people within that culture face, and they fail to speak on them.

The lack of South Asian representation, for example, is a not so widely discussed topic but a very important one. South Asian men regularly get the role of terrorists in film and TV. This plays into the stereotype that all Muslims are terrorists. South Asian women are seen even less in mainstream TV and media and often play into their own stereotype as well. Star Wars: Rogue One star Riz Ahmed spoke about diversity at the House of Commons in 2017.

‘’Its sometimes the most fantastical and unrealistic stories that make the biggest impact, but even in those stories what people are looking for is the message they belong that they are part of something that they are seen and heard and despite or perhaps because of the uniqueness of their experience they are valued they want to feel represented’’

Ahmed talked about the problems that lack of representation can present: “When we fail to represent people switch off, they switch off on telly, they switch off at the ballot box and they retreat to other fringe narratives which is sometimes very dangerous’’

Appropriation allows people to borrow the culture but continue to show prejudice against its people or remain silent about its people and their struggles. Cultural appropriation makes thing cool and stylish for white people but too ethnic for its own people.

Talking about what cultural appropriation means to her Sharan Dhaliwal told us: “Cultural appropriation for me is when somewhere like ASOS sells a tikka, renames it ‘head jewellery’, charges £20 and removes any association with south Asians. It’s profiting via privilege and erasure. One minute you’re called a curry scented bitch and the next minute, that very person is uploading a photo of them at a festival wearing bindis & henna’. 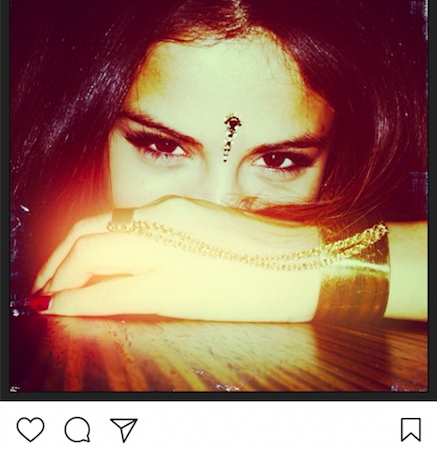 Selena Gomez on her Instagram wearing a bindi in 2014

“We can’t sit down with every person who wears cultural jewellery and find out about their stance on racial discrimination. But until racial and cultural equality becomes a widely practiced theory, it’s easier to assume that a cultures aesthetics are there’s and instead of adopting it, find a way to help these people gain the equality they’re fighting for on a daily basis. Especially since it’s all based on aesthetics, yet the things they’re wearing can sometimes have significant cultural meaning. Such as black women and their hair,” Dhaliwal continued.

“I went to a talk at Tate where CURLture spoke about wearing their hair naturally, and the politics behind it. Whereas if someone outside of black culture wore their hair like them, they wouldn’t face the same discrimination. Again, it’s about recognising the privilege you have, weighing out whether it’s worth the aesthetics and moving your energy into something to help remove the stigma these cultures face from the ground up.”

As a society, we need to understand the impact that cultural appropriation has on the people of the appropriated culture, regardless of whether it’s South Asian culture, Black culture or any minority culture.

Sit down with your friends who are people of colour and discuss their culture, learn about their history and heritage and gain a better understanding of how you can appreciate and not appropriate. Try to understand that cultural appropriation allows people not part of said culture to receive praise while people who are a part of that culture are left feeling angry and upset because they’ve never received that praise.

People should also speak out about the injustices that you see people of colour going through and if you aren’t sure about something ask, if you aren’t sure if something is offensive ask. The way forward is to actually learn about each other’s culture and not just appropriate them.

The art of henna

Is race a man-made ideal?

‘They want our rhythm but not our blues’