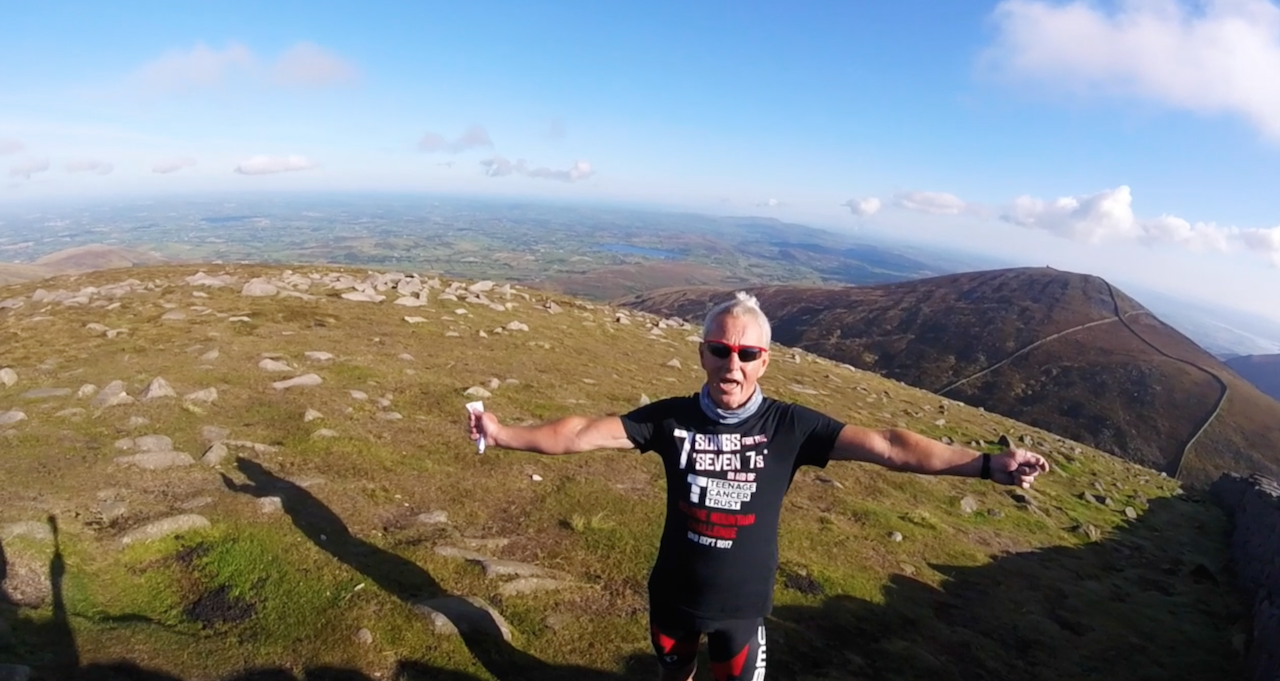 Many people have a charitable cause that is close to their heart and they want to raise money and awareness in any way that they can.

There is an abundance of charities to pick from to show your support through different means of fundraising; whether it be running the London marathon, hosting a coffee and cake afternoon or doing a sponsored walk.

However, some people are determined to go the extra mile and come up with new, more challenging and daring ways to raise awareness for a cause that has a personal importance to them. 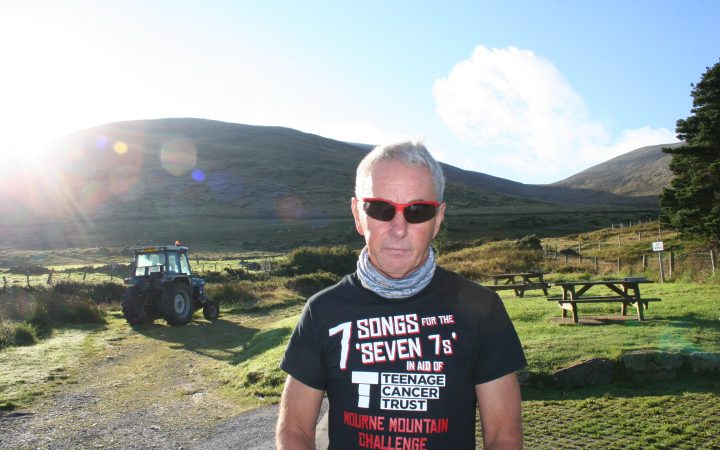 One of these people is Michael Dickson, a 65-year-old sporting advocate, sixties music fanatic and cancer survivor.

In September Michael completed the Seven-Sevens Mountain Challenge; climbing the seven highest mountains in Northern Ireland (all over 700m) all in one day.

To put his own personal twist on it and make it more of a challenge, he sang a song at the peak of each mountain.

Anybody that knows Michael well, his ex-pupils, old rugby teammates and his family, know that he is no stranger to a physical challenge. He also loves his music, so it wasn’t a surprise when he made his own soundtrack to his mountain challenge journey.

Michael chose to raise funds for the Teenage Cancer Trust, a UK based charity that has a mission to provide a dedicated teenage cancer treatment unit in every major city in the UK.

“I first became aware of the charity when watching The Who fundraising for TCT at a Royal Albert Hall Concert. I realised that Roger Daltry was major patron for the organisation. Children in Britain are well catered for when diagnosed with cancer, similarly adults, however teenagers have their own special needs and unfortunately when diagnosed with cancer are placed in wards with young children or with adults, sometimes very ill adults.”

Michael explains that when he was being treated for cancer in the same ward as teenagers it further inspired him to raise money for this specific charity.

“I saw a girl of 15 or 16 years of age who had lost her hair and was awaiting radiotherapy treatment in a waiting room full of adult patients. She looked terrified, it reminded me of the requirement for a teenage cancer unit in Belfast. To that end I decided to raise some funds and more importantly awareness for the TCT in Northern Ireland.”

As someone who has run multiple marathons and to raise money for charities such as the Meningitis Research Foundation, Michael was aware that it was difficult to raise awareness for a niche charity in the thousands of charities involved in the marathons.

He explains that, although he had a goal of raising £2,000 for the Teenage Cancer Trust, the more important aim was to raise awareness for the little known charity.

“Let’s face it millions of people have done marathons and if your trying to raise awareness it needs to be something eye catching. The Seven-Sevens of course has been done before but solo, or just two of us, and with music, if indeed you could call it music, seemed something appropriate. The TCT is a unique charity and maybe this was something a little unique to match.” 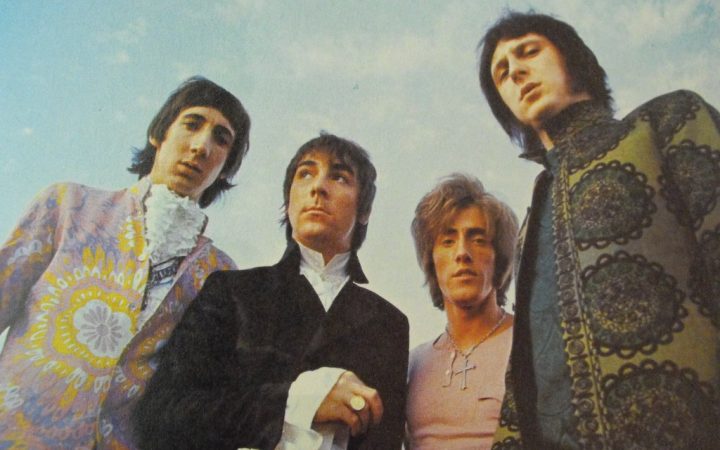 The Who in their heyday [Flickr:Tiffany Terry]

The soundtrack to the challenge appropriately began with Michael singing Walking Blues by Paul Butterfield Blues Band. “I’m a big fan of sixties and seventies music, but there was a message behind each song that links to the charity and links to my experiences of having the disease.

The final song, Behind Blue Eyes by The Who, was a straight tribute to the work of Roger Daltry, who has dedicated himself to raising money for this fabulous charity over the years.”

This mountain challenge wasn’t the first time Michael had organised a challenge to raise money for the Teenage Cancer Trust. A few years ago he gathered a group of his friends and family, to complete a challenging sponsored walk, ‘Who Walks Coast to Coast’ covered 26.3 miles from the coast of Newcastle through the Mourne Mountains to the coast at Rostevor in Northern Ireland.

After overcoming throat cancer in 2016 and having undergone harsh radiotherapy and chemotherapy in an adult ward, alongside teenagers who were also being treated, Michael experienced first hand the environment that teenagers with cancer are in. This is what inspired him to yet again task himself to another fundraising challenge; the Seven-Sevens Mountain Challenge.

“It’s tough! Not like finding out you’ve got cancer when you’re a teenager but it’s still tough. Up and down 12,000 feet over seven peaks.”

Michael explains that he wanted to task himself with a particularly tough challenge in order to do something different that would raise the most awareness that he could.

“A total of more than 22 miles isn’t to be sniffed at. But I believe if you’re going to ask people for sponsorship you have got to challenge yourself a little. It’s also something out of the ordinary but eye catching,” he says.

Michael, along with his daughter Jenna, completed the trek over seven mountains in an impressive nine hours through adverse, and at times dangerous weather conditions. 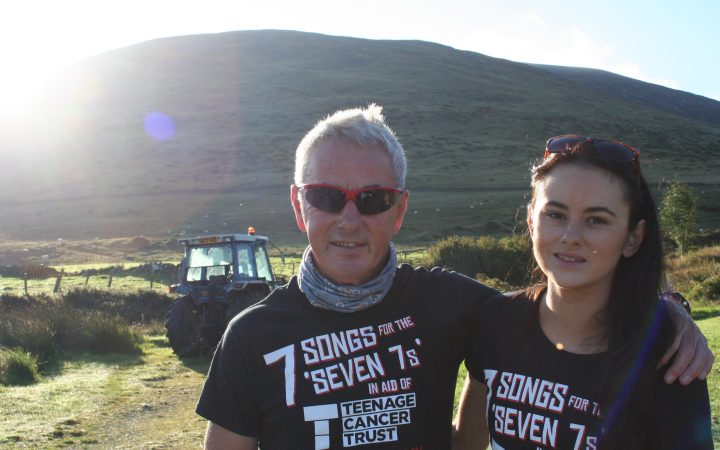 “I had only planned to climb the first couple of mountains to give my dad some encouragement and to film his journey, however I became so determined to finish the walk. The fact is, this type of challenge shouldn’t be easy as it doesn’t even compare to what these teenagers have to go through,” Jenna told us.

Many other charity supporters, similar to Michael, agree with the idea that if you’re going to to a sponsored challenge you’ve got to do something that is out of your comfort zone.

Michael described it as a way of putting yourself in the shoes of those who are suffering that you are trying to raise money and awareness for.

The Seven-Seven’s Mountain Challenge is just one of many extreme ways that people raise money and awareness for their chosen charity. Other challenges include trekking fifty miles up Mount Kilimanjaro, a Scottish quadrathlon including 56.8 miles of cycling, swimming, kayaking and running and The Norseman iron-man style race in Norway. 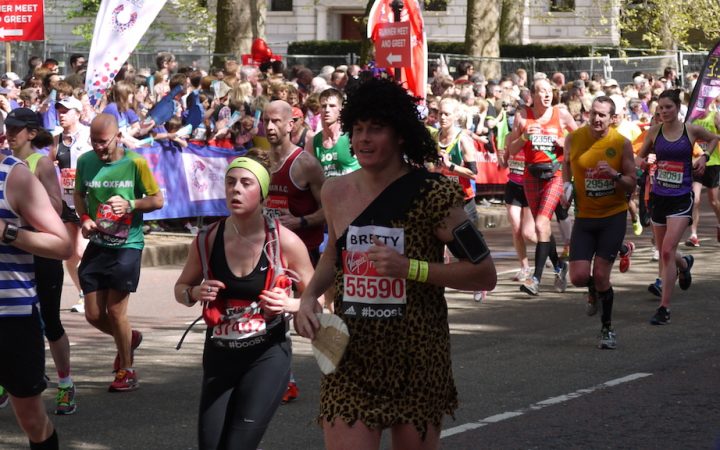 Many celebrities, often as part of well known charity events such as BBC’s Children in Need, Sport Relief or the London Marathon, undergo extreme physical and emotional challenges to raise funds and awareness.

In 2014, BBC presenter Davina McCall completed an incredible 500 mile triathlon to raise money for Sport Relief. Fellow BBC TV personality, David Walliams, also completed an extreme challenge in aid of Sport Relief: a 140-mile swim along the River Thames. Both celebrities raised substantial funds and succeeded in spreading awareness and touching the hearts of people across the UK.

There are more than 1.2 million charities in the world and naturally some are more well known than others.

In 2012 The Guardian revealed that in the UK, Cancer Research UK, OXFAM and Christian aid were among the charities that receive the most donations, surpassing £125,000,000 every year. Charities such as these have already created widespread awareness across the UK.

However, many people, like Michael Dickson, have tasked themselves with the mission of raising much needed awareness for niche charities such as the Teenage Cancer Trust and therefore step out of their comfort zone into an extreme physical and emotional challenge to show support for those in need.