Dinner with an anorexia patient

“Brilliant! I am starving now. It is 22:00 in the evening, and I can go to bed instead of having dinner. I can lose much weight in this way, and let’s see tomorrow…”

This is a sentence that I wrote down three years ago in my diary. The date on the page is February 4, 2015. That was the second year that I decided to lose weight. During that period I was making every effort to remain starving. I did not notice that I had anorexia at that time, but the feeling now is so true and unforgettable.

Surprisingly, I’m having dinner with my friend Tristina, a girl who is an anorexia patient.

She barely goes out for dinner, to be exact, she never has dinner since she began loosing weight. We are sitting face to face on both sides of the table, me holding a bowl of rice in my hand and gobbling the food, Tristina is burying her head in her hands, watching me and ignoring the delicious food on the table. She got her anorexia by only eating vegetables and low-sugar fruits for the past six months.

If I did not “beg” her to come out for dinner with me, she would definitely not come. She has totally lost her appetite and she seems to always refuse food which simply is calories to her. Since she began, she has lost 66 lb (30 kg), dropping from 143 lb to 77 lb (65 to 35 kg). At 5’4″ feet (163 cm), for her height, her weight is far below normal; she is clinically underweight and suffers from malnutrition.

Despite this, nobody can force Tristina to eat anything unless she is willing to. “If I eat more than I expected, or feel full instead of starving, I will feel guilty and even get into a panic. I am so afraid of getting obese again,” Tristina said.

In China, a girl whose weight is over 110 lb (50 kg) will be considered as overweight. This is an abnormal unwritten rule, but girls in China agree with it – they hate their plump bodies. 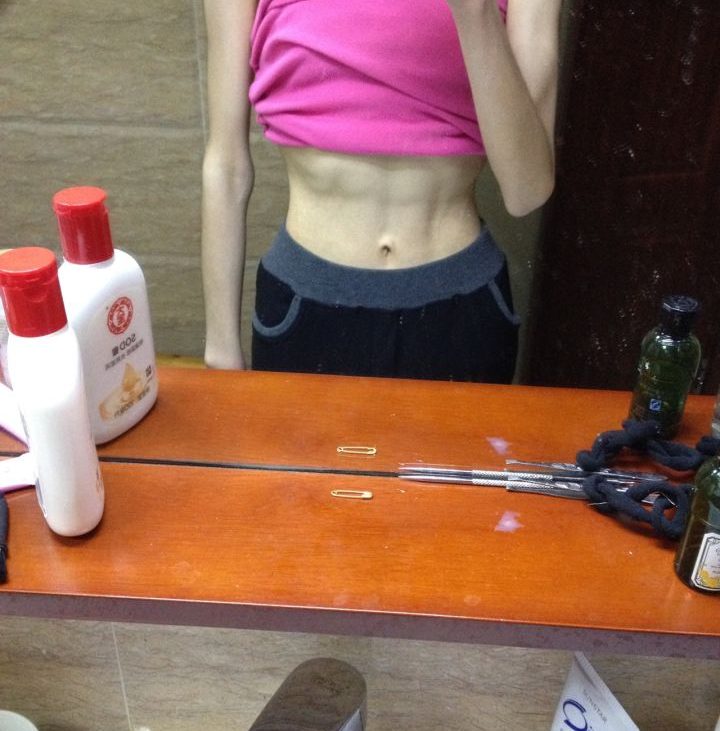 According to the NHS: “Anorexia is an eating disorder and serious mental health condition.Anorexia can also put your life at risk. It’s one of the leading causes of deaths related to mental health problems. Deaths from anorexia may be due to physical complications or suicide.”

“I love food, more than anything else. To be honest, for the most part of my day, I think about what I want to eat,” Tristina admits. What keeps her away from food is the achievement of losing weight.

“I weigh myself every morning before eating as my weight in the morning is supposed to be the lowest in a day. Every time the decrease of the number that shown on the weighing scale can bring me euphoria which makes me feel that the starvation that I suffered is worth it, thus I am encouraged. Gradually, the decrease of the figure cannot satisfy me anymore, even worse, any rise of it could evoke the anxiety and depression. I move the focus on only the number of my weight instead of the shape of my body. That is nightmare and no one can help me.”

One could argue it’s not necessary for Tristina to keep slim, as she’s not a model nor an actress. Nor is she a celebrity who needs to keep a thin and charming body for a better look. She is a normal girl and does not need to be photogenic like superstars.

She also knows that losing weight will damage her health; she told me that, at first, she just wanted to lose weight because when she saw herself in the mirror, she was thought of herself as too “fat”. “I was desperate to get rid of my fleshy and round face, wide shoulders, chubby body and thick limbs. I wanted to beat myself when I looked in the mirror” she said.

I cannot imagine what she looked like when she was “fat”. Under the light, all I can see is her sunken cheeks and her upper chest bone sticking out. Her arms seem to be fragile and so slender that I tend to worry about breaking them I pull to hard. The extra small T-shirt is still too large for her on her skeletal body.

“For others, food is for enjoyment, but for me, it is just for maintaining life,” she says. I feel like I can relate to what she’s feeling, as I myself experienced the same thing. It brings me back the memories from about three years ago, when I did a lot of things in order to lose weight.

I have read diet books and kept a food diary. I also read the food labels on the packages, measuring and weighing portions. I knew that the average of the intake of calories per person should be around 1,700 for girls and 2,300 for boys, so logically, if I burned off more calories than I ate every day, I could lose weight. 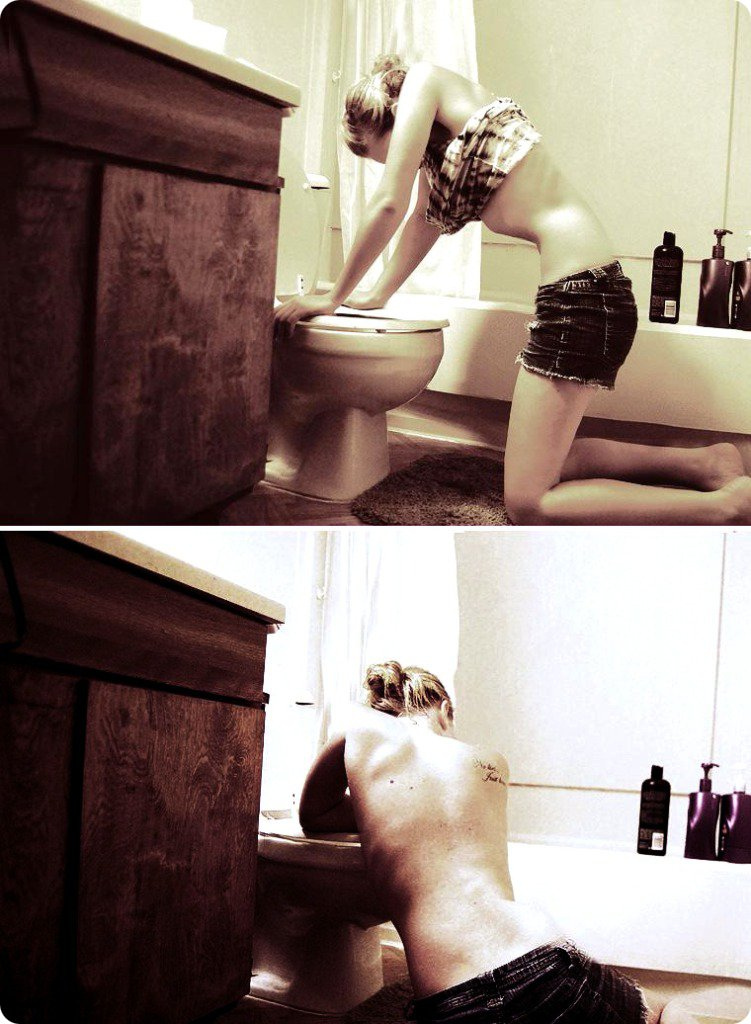 At first, I ate twice a day without having dinners and I was encouraged by the dramatic weight loss and became more strict about the amount of my food intake which made me reduce even more. I ate only a sandwich or two bananas plus a bottle of skimmed milk for a day. I only ate low-fat meals which supply maximum 500 calories a day.

I cut out carbohydrates like rice, noodles and even potatoes and ate as little as I could. Ice cream, cookies and bread were strictly prohibited on my menu. In order to reduce the intake of sodium and fat, there was no sauce in my dishes.  In order to control my calorie intake, I smoked when I felt hungry as the tobacco helped suppress my hunger.

During that period, every day was the same taste for me — insipidity. With an empty stomach, my bedtime became much shorter, and the quality of sleep was worsened. I found that I was unable to fall asleep after lying in bed at midnight, so the maximum sleeping time for me was five hours.

I got up early, around 6:00 am, and began to mop up food in the kitchen like a hungry ghost – I only dared to stuff myself in the morning with breakfast. I was moody, my skin was dark yellow, dry and rough. The sky I could see was grey. I lost motivation and interest in work or study, and nothing could make me happy.

Fortunately, I realised it was making me feel suicidal and decided to try and pull myself back on to the right track. Something that Tristina hasn’t done.

Tristina keeps doing exercise every day. She always does too much exercise in the gym which can consume her energy. “I force myself to spend two hours in the gym everyday to burn up 400 calories by running on the treadmill, after a month, I felt too tired to persist. I would rather eat less.” The lack of nutrition and energy over that long period exhausted her and made her feel dizzy and nervous.

Sometimes she would “indulge” because she craved for the strong taste of food. She would eat some fried foods or chocolate cupcakes, but punish herself after by vomiting. “After I indulge myself, I will go to the toilet to make myself vomit. This is the only way to relieve anxiety,” she explains, “it is disgusting and torturous but if I do not throw up those ‘bad’ foods, it will become a spiritual pain instead, cause I cannot forgive myself and my efforts will be ineffectual.”

When weight loss has become an addiction and mental illness, it is hard for the patient to save herself. According to HelpGuide.org; “While the causes of anorexia are uncertain, the physical effects are clear. When your body doesn’t get the fuel it needs to function normally, it goes into starvation mode and slows down to conserve energy. Essentially, your body begins to consume itself. If self-starvation continues and more body fat is lost, medical complications pile up and your body and mind pay the price.”

“What stops me from hurting myself is my father’s words,” Tristina said, remembering the first time she saw her father cry. “He said that I am the only child to my parents, if I die, what about them.”

Now, Tristina has agreed to accept professional medical treatments and will start to take pills. Although she is still not able to eat much, she has stopped counting calories and caring too much about her weight.