According to The British Skin Foundation, acne affects as many as eight in ten individuals aged between 11 and 30 in the UK.

While it occurs most commonly between the ages of 14 and 17 in girls, and between 16 and 19 in boys, for a small minority (about five per cent of women and one per cent of men) acne can continue into adulthood.

Acne is something being faced by a large portion of our society, yet despite being a very common problem for many people in the UK and around the world, acne is still treated as a major taboo. Something too ghastly to be seen in the media, except in order to sell expensive skin treatments or to mock a celebrity who suffers from it.

Pictures of Kendall Jenner at the Golden Globes were published in every major news outlet – but we weren’t interested in her clothes, we were focused on her skin and the acne visible underneath her makeup.

The pictures proved to be a bit an ego boost for us – we’ve finally found something we have in common with a Victoria Secret Model. We found it inspiring when she posted an image of herself on Instagram, posing with her acne on the red carpet, captioning it: “Never let that s*** stop you.”

But it is still difficult for us to show that same confidence with our own skin. What the media labels in her as brave, it would label as disgusting in us, while attempting to sell us whatever the new cutting edge treatment is on offer this week.

Attempting to change the perception of acne in society is Elona Beqiraj, a 20 year-old photographer, born and raised in Germany. The young photographer, who is originally from Kosovo, has been working on an ongoing photo project which so far includes eight photographs of people with acne.

With her photo project, ‘Redefining Beauty’, she hopes to help people embrace themselves, apart from the insecurities fuelled by the media and the notion that those living with acne have something to be ashamed of, that they must stay hidden and not be seen.

The project is personal for Beqiraj who has lived with acne for two years, she says that having acne has never bothered her as much as it seemed to bother those around her.

“I was still confident and did not try to cover my acne with makeup. I also never considered taking medicine to ‘treat’ my acne. I just could not understand why I should fill my body with chemicals and risk the health of my inner organs just to look good on the outside.”

For her, it was always important that she be herself regardless of the beauty standards being set around her. She is not interested in a ‘cure’ for her acne, she is perfectly content in her own skin and wants to help others to feel the same.

One of the pictures Beqiraj has taken as part of the project is a self-portrait, she has said: “I want to tell the world and especially the people who share the same ‘struggle’ as I do, that we don’t have to hide. We are beautiful the way we have been created even if it doesn’t fit into the beauty standards that our society has set for us. We don’t harm anyone by embracing ourselves”. 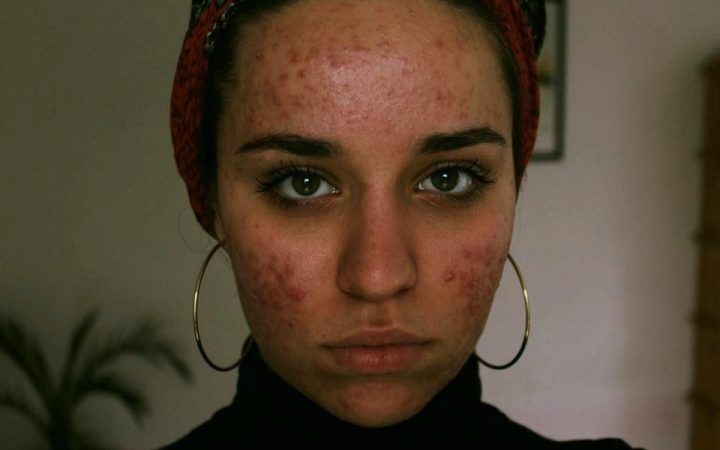 Self portrait by Elona Beqiraj

Her photos encourage people to have confidence in themselves, to feel comfortable in their own skin. We are a society that is obsessed with perfect skin, and this obsession is growing with the worldwide skincare, beauty and cosmetics industry predicted to increase to be worth more than $675 billion (£473bn) by 2020.

Of the cosmetic products, skin care has the highest market share. This is no doubt a result of our fixation with having perfect, pore less, blemish free skin and our need to fix or cover-up what we dislike about ourselves.

Acne for many people is a source of insecurity, a survey taken in 2015 by the British Skin Foundation found that 95 per cent of acne sufferers said acne had an impact on their daily lives and 63 per cent reported a fall in self-confidence due to acne.

Beqiraj was defiant when she first got acne: “I did not let my skin define who I am. I was happy with myself. The only thing that reminded me of my acne were the people who constantly mentioned it. That’s also why I started this project – to show people that acne is normal and a lot of people live with it. Acne is nothing to be ashamed of and nobody should be bullied because of it.”

However, bullying is unfortunately something many acne sufferers face. The British Skin Foundation found that more than 40 per cent of those asked said that they have been bullied due to their condition.

Additionally, more than half of acne sufferers have experienced verbal abuse from friends, family and other people they know due to their skin condition. Abuse is a too common problem faced by those suffering from acne. It is even more difficult to accept yourself when those around you don’t. 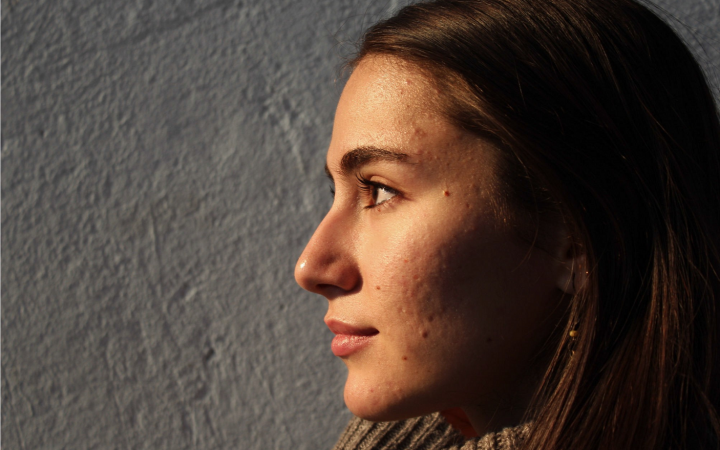 She cites the negativity of society towards imperfections as the inspiration which led her to start the project, the reactions of people around her when she first developed acne stunned her.

“I was surprised by all the negative comments that I started to get and it felt as if people started to reduce me on the basis of my skin as if I wasn’t more than my outer appearance. Instead of feeling down I used their reactions to turn this societal issue into art.”

She uses her photography to challenge people’s attitude towards acne and those who have it. One of her models, Arbresha Uka, recalls some of the things that have been said to her in regard to her acne, “Ewww, what happened to your skin?” There’s often the suggestion that having acne is something abnormal and disgusting.

For those who suffer with this issue, comments like these contribute to a loss of confidence, more often than not it leads people to isolate themselves in order to avoid the offensive remarks of the people around them. 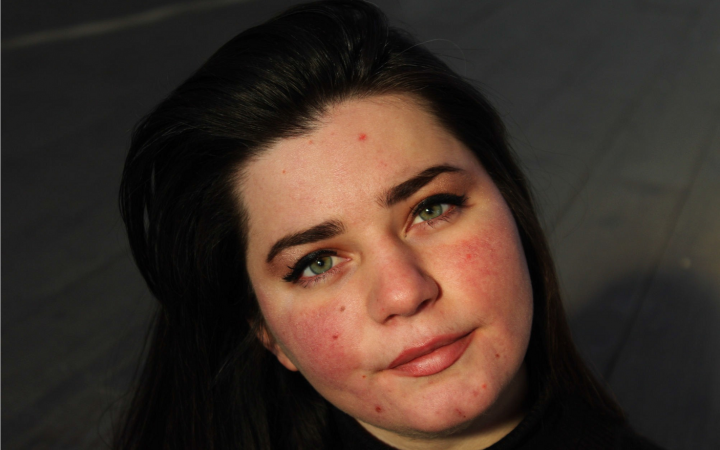 Oketa Basha explains how she felt towards her acne: “For years I have felt shame and embarrassment because of my skin. I used to have a fringe so it would hide the spots on my forehead. I used to put on a lot of makeup just so I could feel a little prettier. I used to lock myself in the bathroom and cry in front of the mirror, wishing for a beautiful skin. For so long I have hated the way I look.” Her experiences are shared by many people with acne. 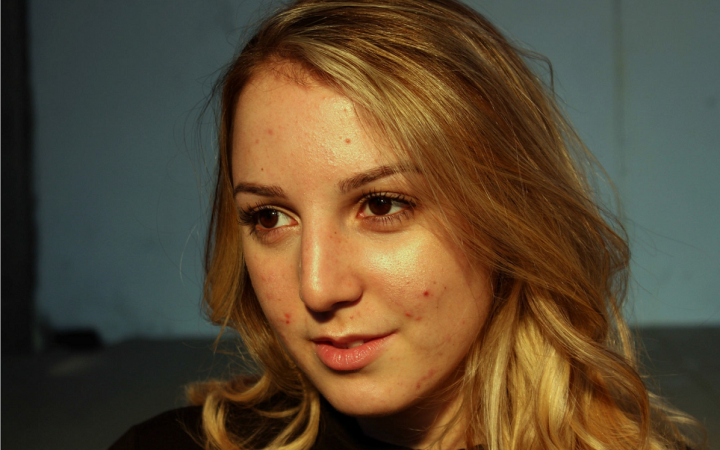 The hostility faced by people with acne is no doubt as a result of the many misunderstandings about the issue, they play a huge part in the stigma surrounding acne and the perception non sufferers have of the people who suffer from it.

Acne can’t be cured by scrubbing it off and, in actuality, cleaning your face excessively has been found to exacerbate acne. By over cleansing the skin, you may be washing that excess oil off, but the body will seek to rebalance itself by producing even more oil often leading to more acne.

Another common misconception is that people with acne are unhealthy and that they eat a lot of greasy fast food, but there has been no research that has been able to indisputably link diet and acne.

Another myth that many people believe is that acne is a problem only faced by teenagers going through puberty and that it is something that you grow out of, but this is inaccurate.

Whilst most of the people suffering from acne are indeed teenagers, a survey carried out by WhatClinic.com in 2015 found a 200 per cent rise in the number of adults seeking specialist acne treatment. Showing that acne is not an issue faced by teens exclusively but people of all ages.

Acne is largely accepted to be as a result of hormonal imbalances, something that’s completely out of a person’s control so it is unfair to label those who have it as unclean or lazy. 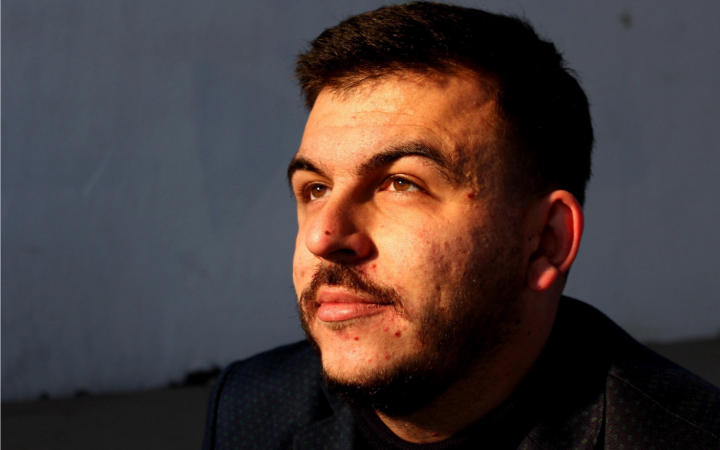 “I accepted myself with my acne long ago and I hoped that with this project I could help other people to do the same. I hoped that people would see the photos and realize that they are not alone and that acne is nothing to be ashamed of.”

Beqiraj hopes that seeing others show confidence despite having acne would help other sufferers to be more comfortable with their own skin.

“I hoped that people who live with so-called ‘imperfections’ would see the photos and see that they are not alone. Maybe they could feel more confident if they could identify with the people in the photos. How can people with acne feel comfortable with themselves when they are surrounded by media that only shows them models with ‘perfect’ skin after hours of Photoshop edits?”

Medina Mehmeti accepts that “it’s not easy to be that confident to go out without covering your acne. You have to be prepared to be confronted by different looks or also uncomfortable comments about your skin.”

Although she also admits that once you stop caring about the opinions of others: “You realise that no other look or opinion is worth your freedom and your self-confidence. This is the best feeling ever existed!” 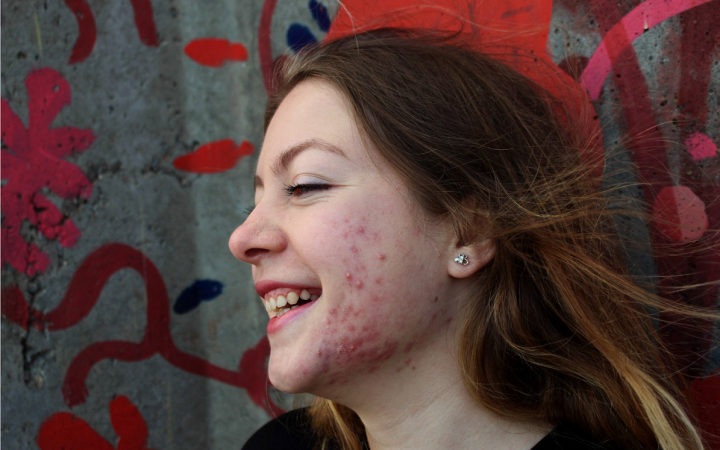 It’s no secret that we live in a world obsessed with perfection. The celebrities and models we see daily on the pages of magazines are shown as being flawless, with perfect skin, body, and teeth.

We aspire to be just like them despite knowing that those images have been retouched and altered to erase any imperfections.

For some reason, we still compare ourselves to those unrealistic images and try to measure up to those insane standards – we will try anything and everything in order to be considered perfect like those we see in the magazines. 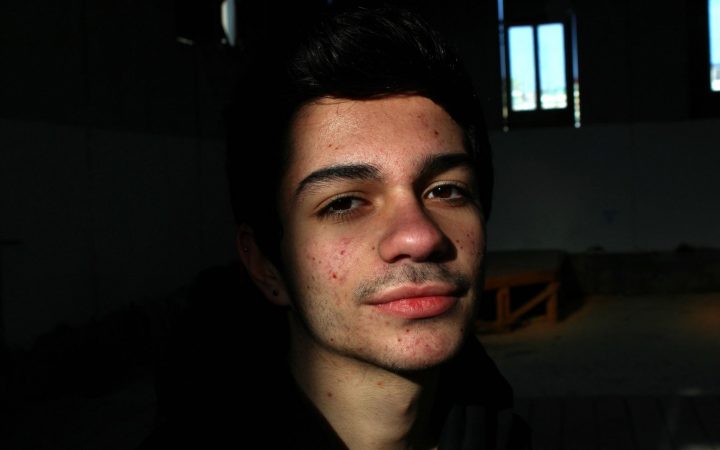 We can never be content while chasing unrealistic dreams, it is important to see images of real people who look like ourselves. These images act as an acknowledgment that we look perfectly normal, we have the right to exist and that we don’t have to hide away, and that it’s ok to be confident in our skin.

Another model featured in the project was Blend Bytyqi, he describes how he was embarrassed by the appearance of his skin at first, but seeing others with the same problem as his own, made him realise that isolating himself wouldn’t help him or his skin, “I decided to get on with my life despite these ‘ ‘flaws’ and remembering that being unique does not mean you’re abnormal, it just makes you different.”

The message of this project is clear: having acne is okay. Acne doesn’t determine your worth or your capabilities. Everybody should be confident in the skin they’re in.

To explore more of Elona’s work, you can follow her on social media:

All images by Elona Beqiraj.