Once referred to as “the master of us all” by Christian Dior, the exhibition Balenciaga: Shaping Fashion explores the revolutionary designs of Cristóbal Balenciaga, and how he imprinted a lasting impact on the future of fashion. 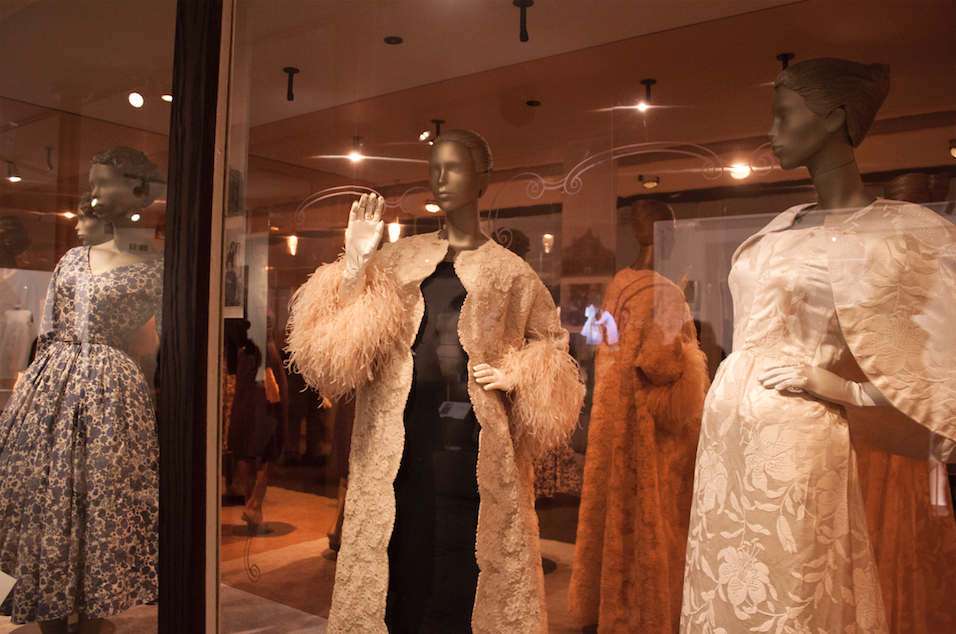 As you enter, the exhibition itself is split into sections looking closely at his craftsmanship and workrooms, as well as his client’s experiences – where you can find donated pieces from actress Ava Gardner and socialite Gloria Guinness – and his influence on the designers of today.

Most of the pieces on display focus on his work during the 1950s and 1960s, the height of his career, and we get to see an up-close and personal view of some of Balenciaga’s most famous designs, from the envelope dress to the baby doll and sack dress. 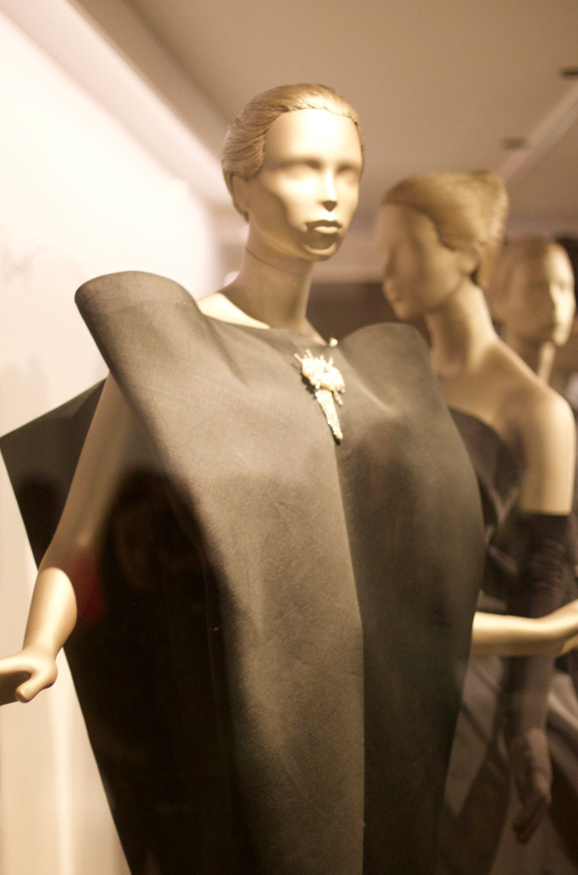 An alternative to Christian Dior’s new look in the 1950s, Balenciaga changed the shape of women, creating new and unusual silhouettes and volumes.

Pieces including the sack dress, which eradicated the waistline all together, was a style prediction by Balenciaga which was created long before its height of popularity in the 1960s, and styles including the shift dress are still eminent in today’s fashion.

Born in 1895 in Spain, Cristóbal Balenciaga is synonymous in fashion for his architectural shapes and manipulation of textiles. Unlike most designers, Balenciaga began with the materials and drew sketches around them. “It is the fabric that decides,” he stated.

Iconic garments including the one seam coat, where a single seam ran under the arm alongside several darts, became so popular during the war era, people would risk their lives travelling across Europe just to have one for their collection. You can even make your very own paper version of the celebrated coat within the exhibition. 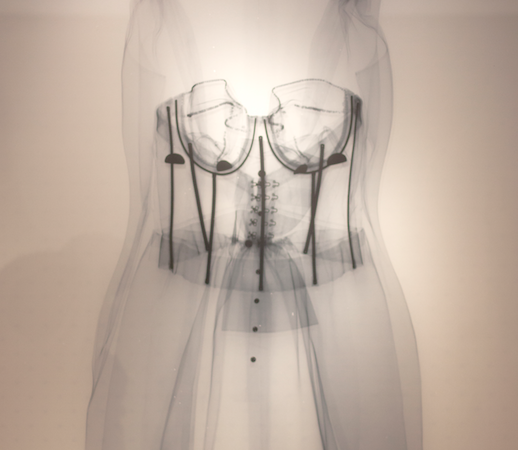 One of the most dramatic features of the exhibition, however, which will give aspiring designers a field day is the digital X-Ray photography implemented to help break down the extraordinary structures.

Thanks to the work of Nick Veasey we get a greater insight towards how Balenciaga created his unusual volumes and signature balloon skirt designs.

Alongside this, another collaboration was made with students from London College of Fashion who created replica toiles of garments to further break down the construction of designs.

This is all joined alongside original sketches and fabric swatches that were taken from Balenciaga’s sketchbooks, allowing us to be fully immersed in the process of creation and uncover the mystery behind his innovative collections. 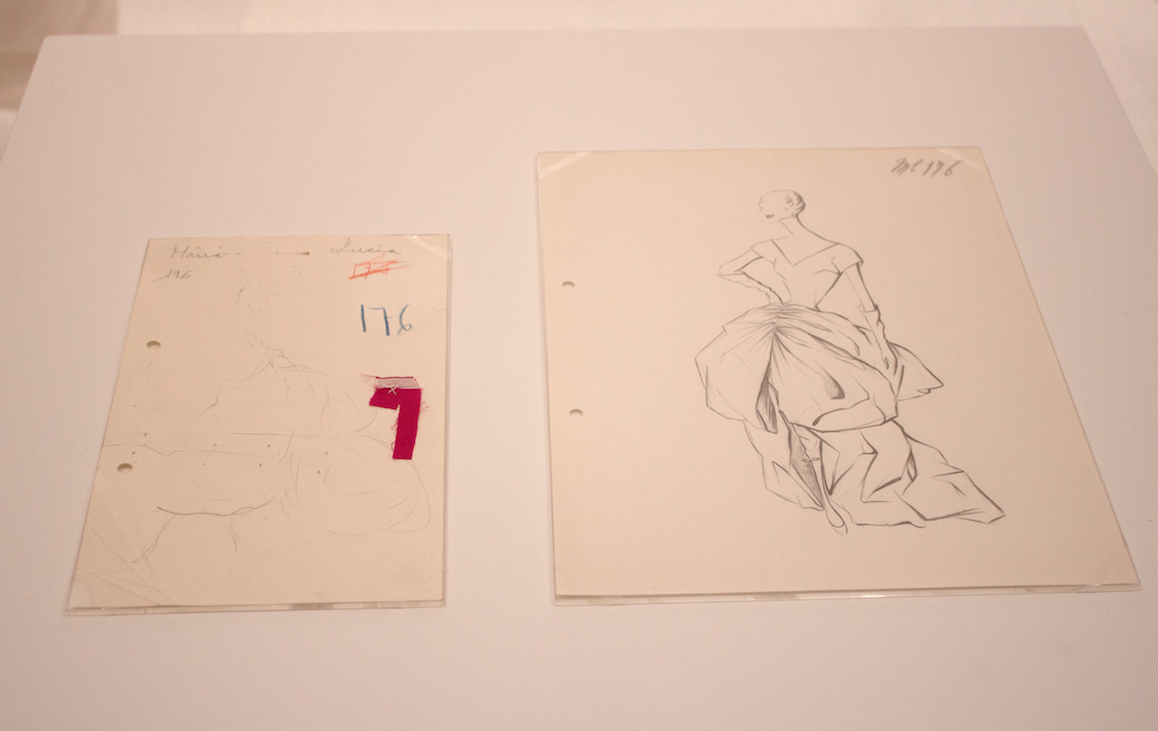 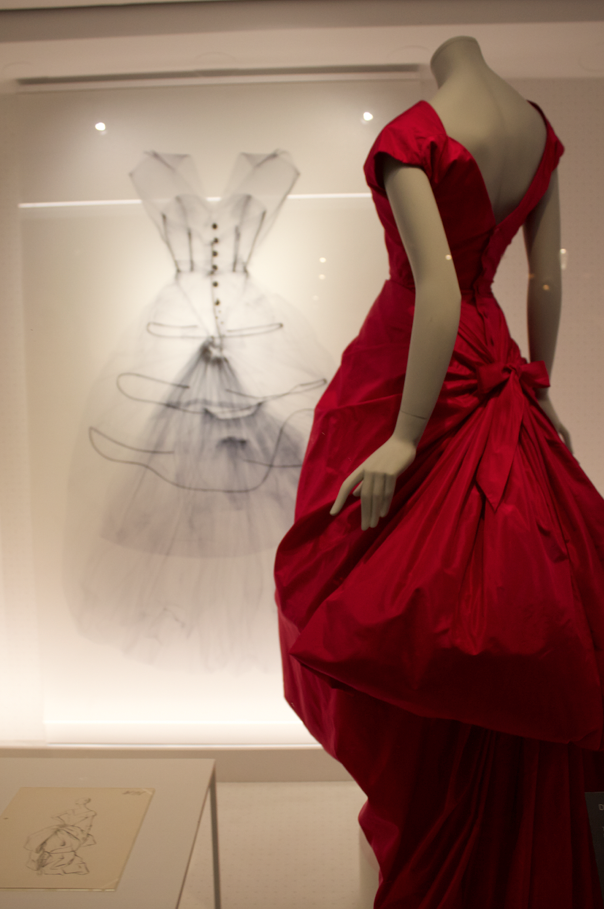 As you follow the exhibition round in the low-lit space, you can see how he drew influence from his Spanish heritage with the use of florals, ruffles and sleeve details (turning a bullfighting clothing into evening gowns).

It is no surprise that you might walk around and find it difficult to believe how women of the time would be seen wearing his pieces, considering the futuristic architectural structures.

Although the space for his work is limited, you can still find yourself being transported back in time. It is the 1950s and you are a client invited to Balenciaga’s salon show. In this intimate setting, women are walking around a small room in his gowns, holding a number, displaying the collection to respective clients who are writing down the items they wish to order.

Even in black and white his work is still mesmerising as it comes to life, rather than on a statutory figure behind a thick glass screen.

These shows were exclusive and even journalists were not allowed to view the collections until one month had passed. This was done to protect his designs from being copied.

The dedication to his work and clients led Balenciaga’s couture house in Paris to be the most expensive and exclusive at the time. 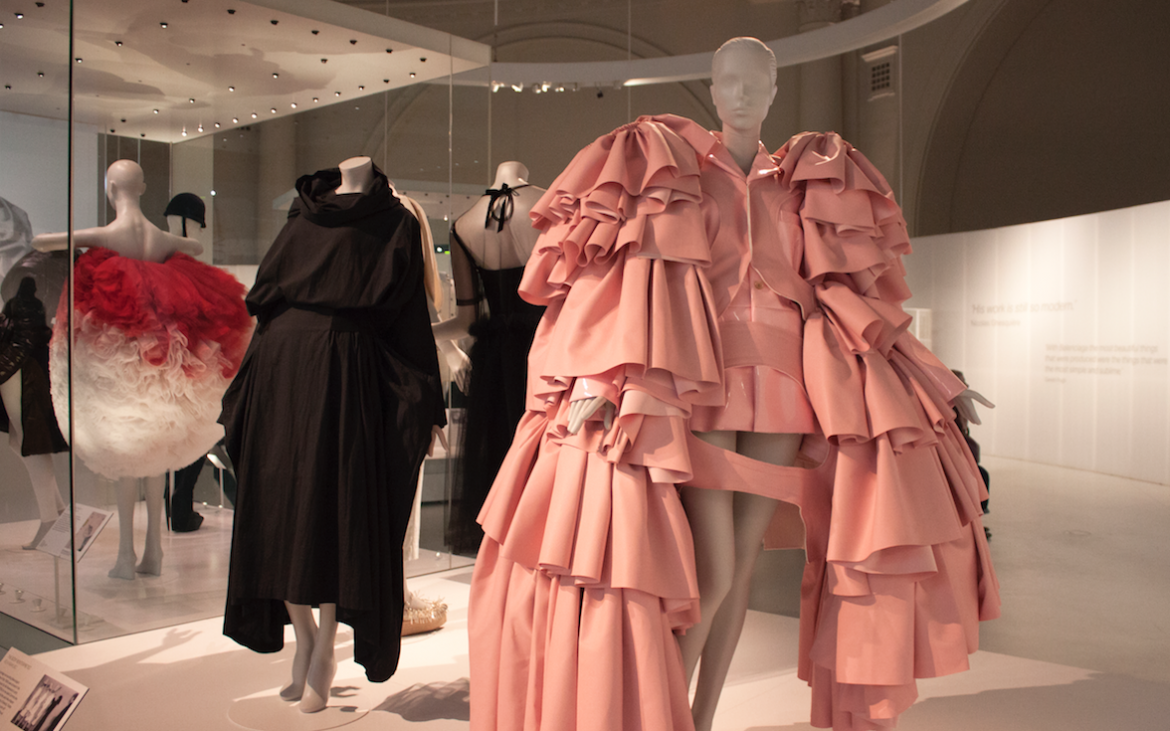 As you move to the upstairs floor space of the exhibition, modernity sets in. You are first greeted by bright lights and luminous white backgrounds with distracting clips of his contemporaries being displayed on the surrounding walls. 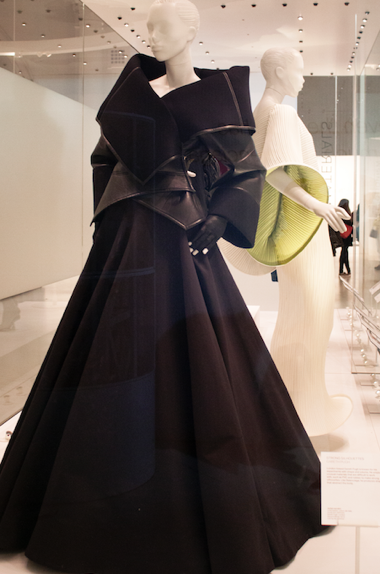 This is joined alongside a projection in the centre of the room, visually showing his work transforming into pieces from current designers, emphasizing how his legacy has transcended through to the fashion of today.

The upstairs show space is filled with the work from his protégés including Oscar de la Renta, Paco Rabanne and Givenchy, to his devotees such as Sybilla and Yoki; as well as the work of the former creative director of Balenciaga, Nicolas Ghesquiere who reinvented Balenciaga’s iconic balloon silhouettes.

You can see how each piece on display links to a fragment of Balenciaga’s work and styles. With designers including Gareth Pugh and Iris Van Herpen who continue Balenciaga’s experimentation with textiles, creating abstract shapes from PVC, rubber and thanks to new technological advancements, such as 3D printing.

Cristóbal Balenciaga set the pace for designers of today. His influence still echoes through to the current collections including an off the shoulder ski jacket on display taken from the Autumn/Winter ’16 collection by current creative directive Demna Gvasalia.

The exhibition Balenciaga: Shaping Fashion explores the work of the master who set the tone for modern fashion and revolutionised femininity of today, from ready to wear collection to high-street fashion, his influence is injected throughout.

This must-see exhibition is open until Sunday, February 18, 2018.

All images by Zoe Mundell.