The Canary Wharf annual ‘Winter Lights Festival’ returned in 2018 for the fourth year running, bringing an array of more than 30 light spectacles to brighten up your winter blues.

Visitors headed down to Canary Wharf station on the southbound Jubilee Line and could pick up a map from one of the many staff members dotted around the area.

Many were wrapped up warm and grabbed cups of hot chocolate to shield themselves from the cold so that they could embrace the view of vivid parades of colour surrounding the Canary Wharf area. 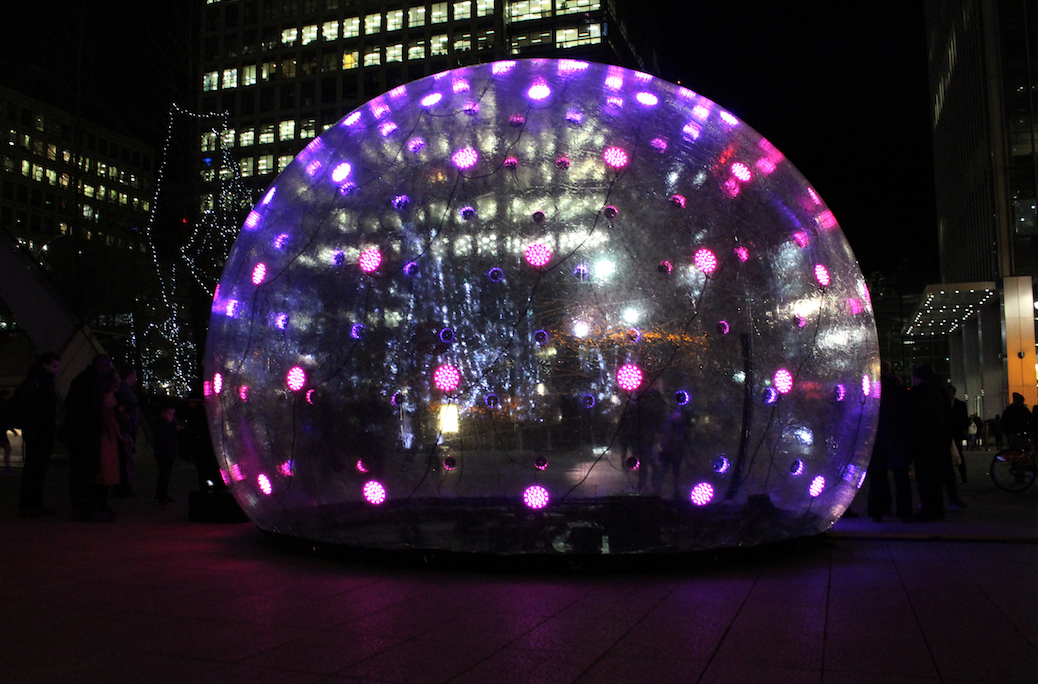 This year, the display of light art was filled with interactive elements and as you walked out of the station you were immediately absorbed by the first interactive installation; a multicoloured orb of lights (a Sonic Light Bubble) which emitting sounds as you touched the many colourful pads.

Following the map around the area in search of anything bold, bright and glowing and you could stumble upon enormous inflatable bright white rabbits in the Jubilee Park. The installation was called Intrude by Australian artist Amanda Parer who has displayed these innocent creatures at several festivals across the globe, bringing out the child in us all. 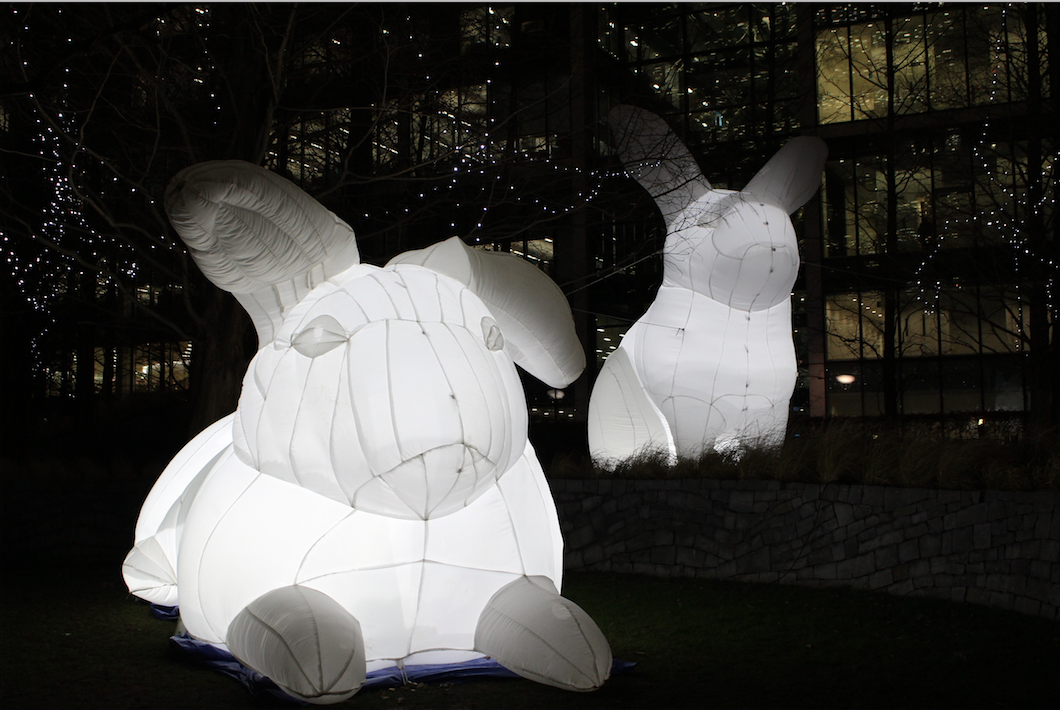 But this wasn’t the only installation that would leave you reminiscing about your childhood. Down by the docks, multiple LED-lit cubes (Pixels) were laid out for visitors to play with; people could use their imagination to create a colourful block of shapes, although this is was very limited with only around 15 blocks in total.

At Canada Square, there was a wave of light-up pixel triangles that created a performance of movement, light and sound. Personally, I found that the display itself resembled a soundtrack that could be found in the Netflix series, Stranger Things. The robotic-like motions of the five-metre-high installation and clunking metal noises it made as it moved, all added to this impression. It was called Abstract by Collectif Coin, and it was certainly named correctly. 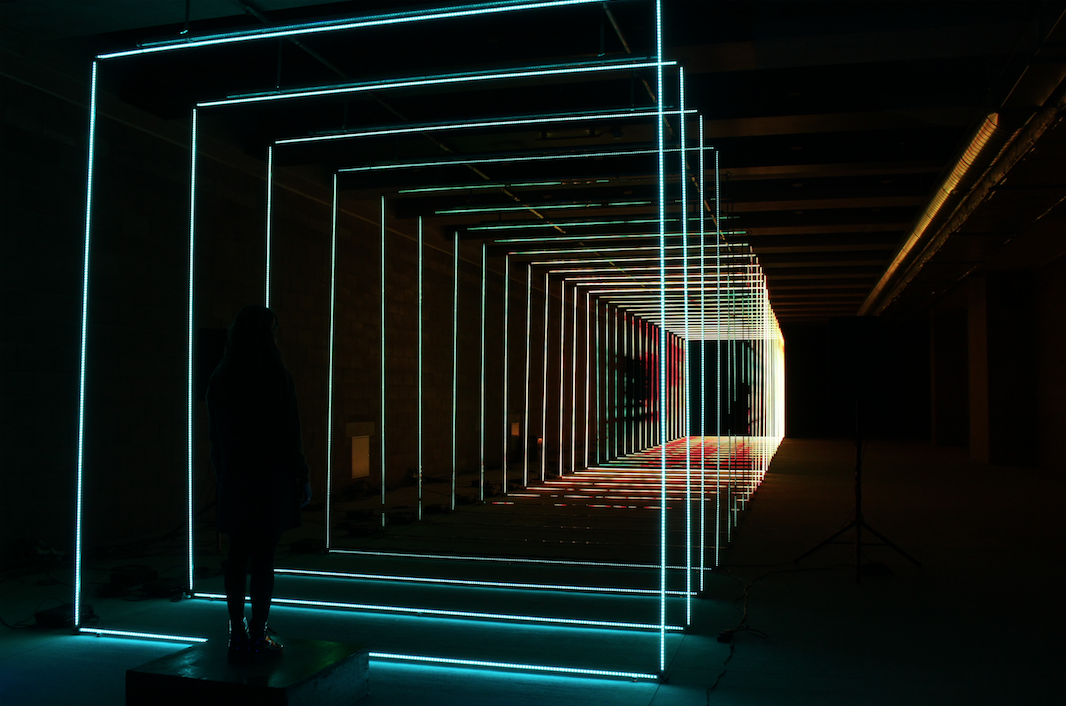 On Your Wavelength by Marcus Lyall

Within the Crossrails you could find pieces by several artists covering the different levels including Luma Paint Light Graffiti by Lichtfakor, where you could create your own artwork on the wall using light up domes as your can of spray paint. But this wasn’t the extent of the installation, the artwork could transform anything into living art, including you, and at the click of a button, you could be projected onto the wall.

As you followed the arrows two floors down, a hallway filled with installations lit up. The first installation at the bottom of the stairs was an interactive piece. In groups, you entered a dark room and one-by-one, if you wished to participate, you could step up to a platform, put on a headset and let your brain make the art. On your Wavelength by Marcus Lyall used an EEG headset to collect electrical data from your brain to create multi-coloured waves of light and sounds. 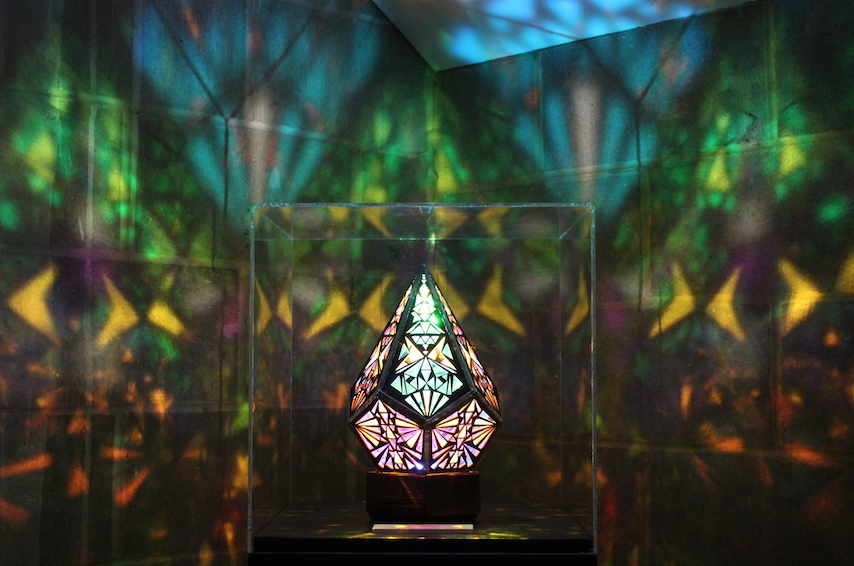 Further down the hall Future Fashion by CuteCircuit could be found (which didn’t really make any sense from first glance), the glowing pixeled love heart in a box was definitely an Instagram-worthy picture to take. The installation required you to use a social media responsive App to change the displays.

Other pieces down the walkway included: Selected Artworks by Amber Stephani, a mesmerizing series of objects emitting rainbows of colour on the surrounding walls, and Clones by Joachim Slugocki, which displays a series circular paintings using UV lights to make them glow in the dark. 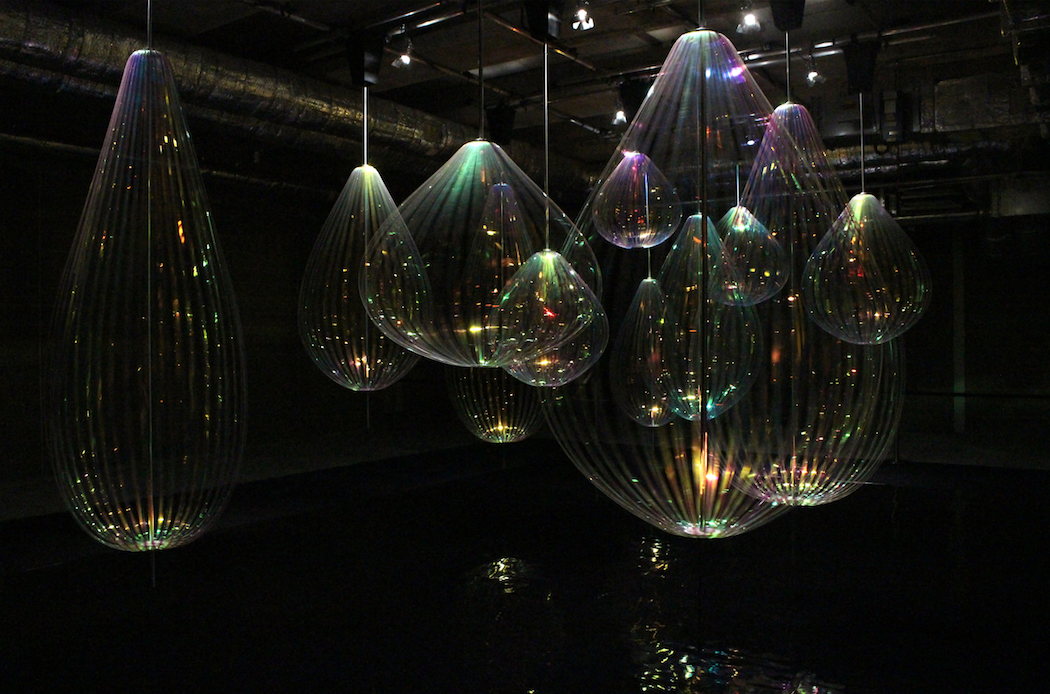 But the highlight of them all was Reflecting Holons, which looked like a series of bubbles spinning and moving together – except these didn’t pop. The reflective surface underneath and the spotlights on the objects themselves created a twinkling set of giant mesmerising water drops in the centre of the room.

Following the map towards the West Ferry Circus, you could find pieces including Halo, floating above a pond, releasing warm tones of light and reflecting in the water below – until the wind blew and its reflection became an orange blur. You could also find the return of Bit.fall, using water and reflecting lights to create a waterfall of words that disappeared into the stream below. 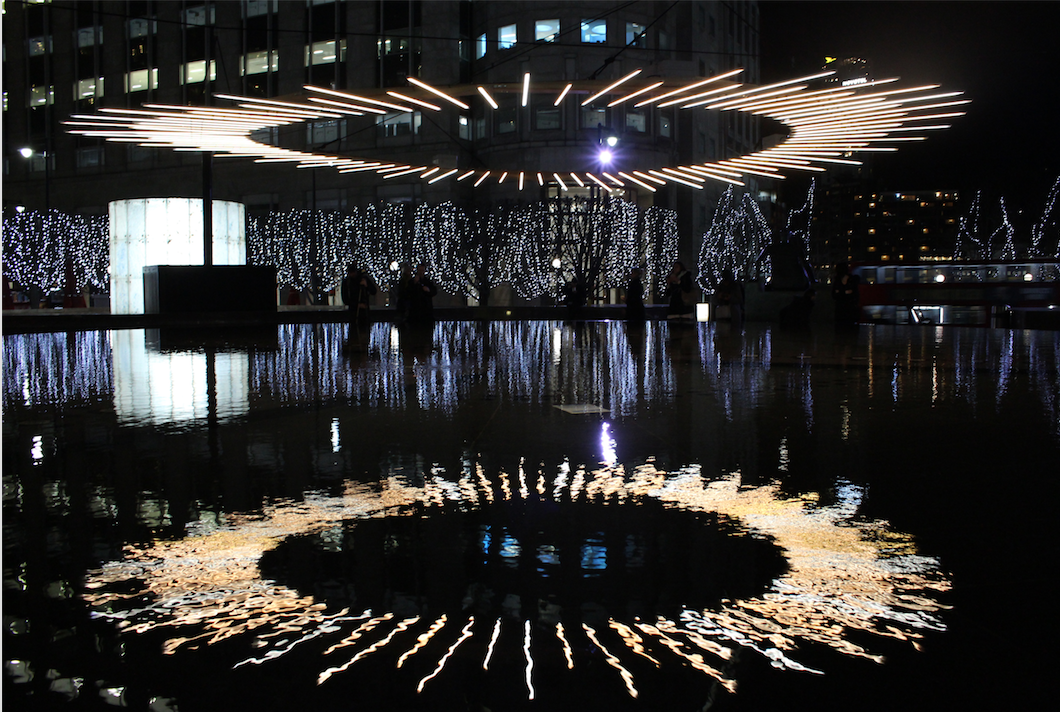 However, personally, I felt that not all the pieces on display were worth embracing the cold for. Pieces including the Apparatus Florius felt a little anti-climatic, considering the image in the handbook looked far brighter and more intriguing than the real thing.

A series of strings were set up amongst the plants and multicoloured flashing lights bring it to life, but not to the extent you would wish. A low glow of colour is produced, looking more like a set of strings are caught up within the plants, almost like spider webs, and not as beautiful as hoped.

Similarly, the Light Benches and Urban Pattern installations; as beautiful as the creations were, I would not embrace the icy temperatures to see it again. They are pieces I would appreciate if I walked past, but would not go out of my way to view.

Of course, the displays with interactive elements were by far the most popular and if you wanted to get involved in all the action, you had to be prepared to queue and wait your turn. 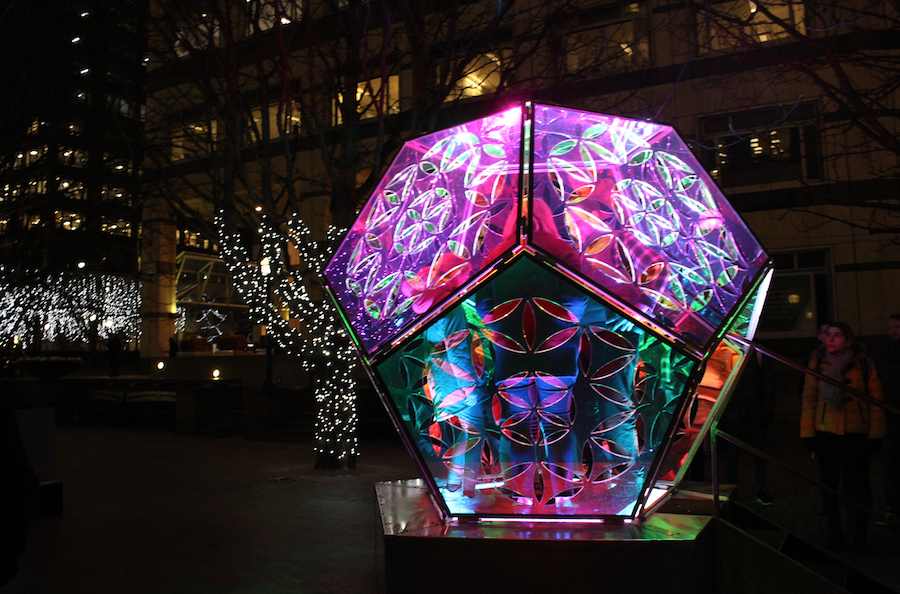 I spoke to an attendee at the festival who said that “It’s a great collection of pieces which really brighten up the area and is a fun thing to do, especially being able to interact with so much of the art. It’s just a shame about the weather as I rushed around and missed a few because it is just too cold for me.”

The annual light festival brings you incredible pieces of artwork from across the globe, dotting them around the financial district. It’s a shame how cold the weather is as you might struggle to see every piece without losing feeling in your hands like I did.

Look out for the magical spectacles that light up Canary wharf next January when you can layer up and let the visions of colourful lights warm you up, unfortunately not literally!

All images by Zoe Mundell