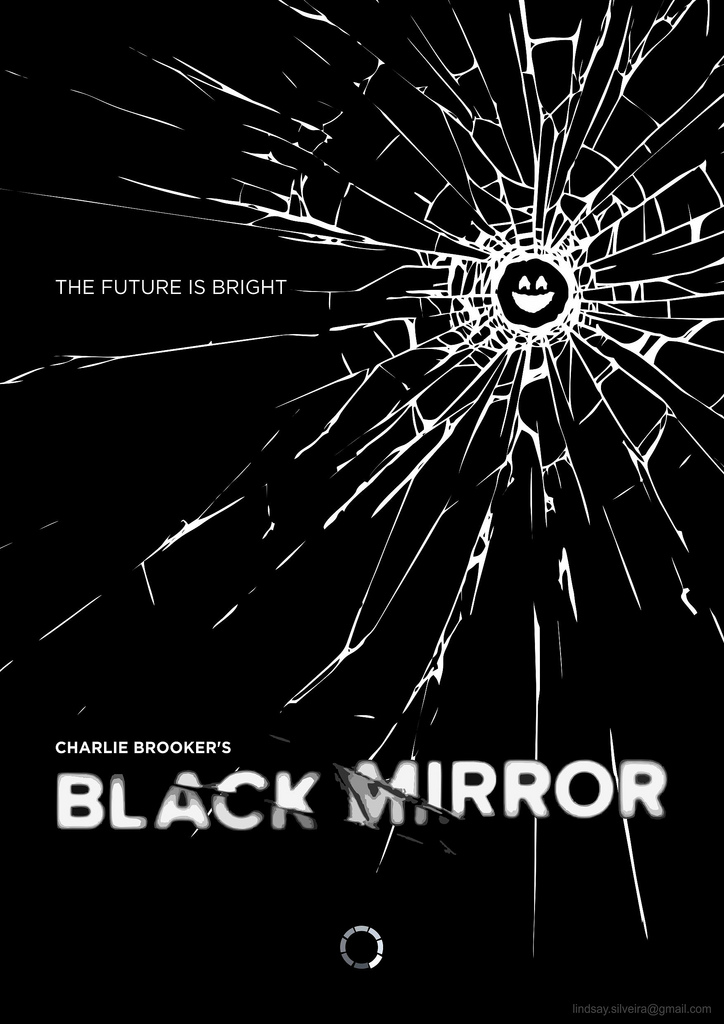 I sit on my bed, leaning my back onto a cushion and holding my laptop on my lap. It is 1:00am and I am hyped and expectant.

The newest season of Black Mirror has finally launched after a year-long wait.

Despite the fact that I have heard a lot of negative comments and complaints about the newly released season, I cannot douse my enthusiasm at all.

Black Mirror is a drama series which challenges audiences’ imaginations, enlightens people’s opinions towards powerful technologies and discloses the contemporary social problems with a dark and satirical tone.

I have savoured every single episode in the last three seasons at least twice. The episode called National Anthem in the first season and the White Bear in the second season are the best ones in my opinion, as they refreshed my understanding of British drama.The stories are indescribably excellent and hard to be transcended.

Since my first encounter with Black Mirror, the show has created an impression of a stylish, iconic, thought-provoking and thrilling series. If someone asks me about my favourite TV shows, I would strongly recommend this short but forceful drama without hesitation as it is a legendary work and worth spending one’s time to watch it.

The drama brings a sense of repression and tension to its audience, who in turn is satisfied and pleased by this kind of stress and willing to be led by the plot. It can pull people into the story to and make them feel the protagonist dilemma.

Every time I watch it I feel both stimulated and ungratified as the afterthought is endless, and people always complain that the run time for an episode, which is 40-60 minutes, is too short.

The first two seasons were shown on the UK’s Channel 4 in December 2011 and February 2013. Then in September 2015, Netflix took over the programme, and since then, Black Mirror has embraced American elements, allowing it to use a big budget to make epic short films for global audiences to see.

The third season was shown in October 2016. After one year, the latest season was finally shown December 29, 2017. I heard mixed reviews about it, and most of them are negative.

The fourth season continues its unique style: standalone and short episodes with a dark and ironic plot. Through stories, it critiques the impacts of new technologies on modern society. The stories happen in an alternative present or the near future and act like an alarm bell to remind people what the consequences of fast-developed technology could be one day – a threat.

This fourth season Black Mirror covers the element of various technologies which exists in reality, for example, the virtual reality technique in the opening episode USS Callister. The first episode looks like a vintage version of Star Trek. It combines the reality and virtual world together to demonstrate a geek coder who acts like a “nice guy” in the office, but who also has a secret dark side.

While criticising the nerd culture, we can easily feel that Charlie Brooker, the writer of Black Mirror, has also made an effort to show a colourful and vintage style scene on the spacecraft in the virtual universe. The remarkable performances of the two leads Jesse Plemons and Cristin Milioti are also an important part to help this episode to reach the Hollywood level.

Black Museum and Arkangel are my favourite episodes in this season. They demonstrate what the indulgence of new technology can do to human relationships, questioning the audiences moral standpoint.

They are the two episodes closest to our contemporary life. Both of the stories are based on basic human impulses and instincts. In addition, they are well developed with the help of new technologies, which remind of the abuse of technology can do to violate our original intention and ruin people’s lives. These two episodes show the strongest emotion and pose a moral question to the audience, giving them space and opportunities to consider what they would do if they were in the same position.

I firmly believe that there should be implications in each story. In the episode Hang on the DJ, a dating programme implicates big data. Beyond the reality, the story shows how lovers are matched by a system and also discloses the tragedy that hides under the mechanised matching system. It seems to be a pleasure and fun, however, the tragedy will be uncovered one day if our sentiments are dominated by the mechanical technologies. 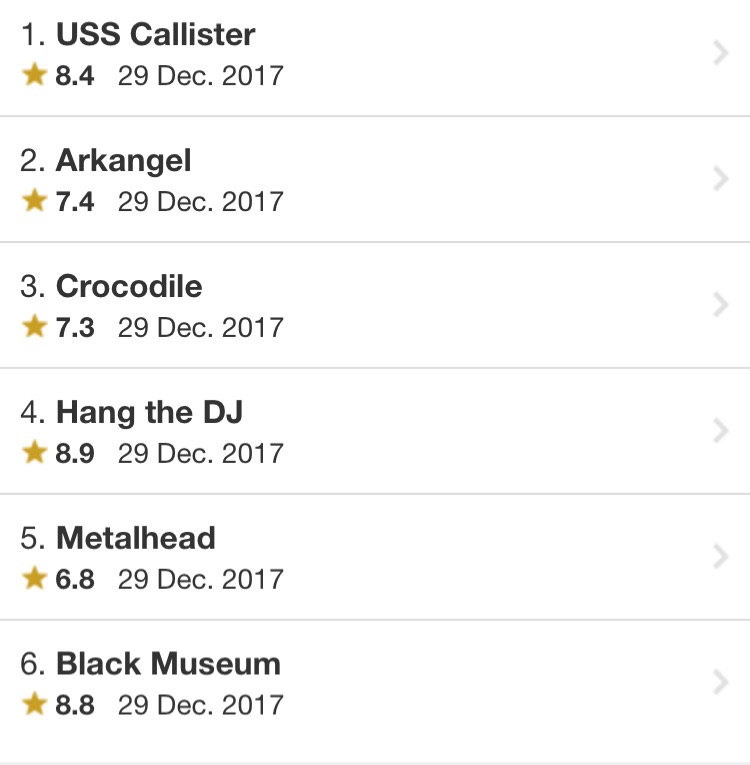 By seeing the rank of season four on IDMb, Crocodile seems have got the lowest rating among the season’s six episodes. This episode is entirely about mood and suspense, and the reason for the low ranking, I guess, is the lack of eye-catching invention of the plot. I already knew the ending at the beginning of the story. The audience is already used to the unpredictable and fabulous endings of the Black Mirror stories, however, the ending in Crocodile is not shocking nor or surprising enough.

The crisp black-and-white photography in Metalhead is a bold breakthrough I would say. Compared to the previous episodes, a monochrome world seems to be more successful when it comes to creating a ruthless and creepy ambience that reveals a sense of hopelessness and grim. It is a survival thriller full of despair.

In the post-apocalyptic landscape of the Scottish Moors, a woman named Bella endeavours to survive in a land full of “dogs”, who are like robots with human-like minds with their only intention to wipe out human-kind. From the technological perspective of the story,  the “dog” should be a metaphor for the artificial intelligence technology today. Through the peculiar imagination, the director wants to present a world that could be ruined in one day if human beings were dominated by artificial intelligence.

Looking through the whole fourth season, I can tell that the narrative level of Black Mirror is still commendable and admirable. Black Mirror again, shows its adept and engagement on picturing the dark atmosphere.

It is not hard to see that the theme for this season is to alert people about the unpredicted power of technologies, which it tells in a straightforward way: “These are what we have got today, and this is what might happen in the future. Do you want it? Are you afraid?”

I can understand why people find the season four disappointing and frustrating. It is not a surprise that after the success of first seasons, fans of the show had extremely high expectations. They are looking forward to new unexpected surprises, imaginative ideas and sharp angles of stories.

Nonetheless, the harshest comment does sound rational; “No dark punchlines — no meditative afterthoughts — dumbed-down — gratuitous — gimmicky — why does everything turn to shit when it has success? Too bad — each episode of seasons 1-3 pretty well blew my mind — season four is just high-school drama plots — what a low-down dirty shame.”

Compared to the previous episodes, in season four the logicality is not subtle or rigorous anymore, and the ending of the stories can be easily predicted by the audience at the very beginning.

Black Mirror is popular among its fans as dark and nihilistic. However, this new season is neither satirical nor thought-provoking, but it is easier to digest. The overly detailed descriptions and dialogues settings weaken its sublimation and symbolism. It feels like all episodes are lazily written and there is also lack of originality throughout the season.

In believing the Black Mirror series should be a tricky riddle. Although it is still a fantastic drama, sadly it is just not a mystery anymore but degrades into a plain mainstream science fiction.