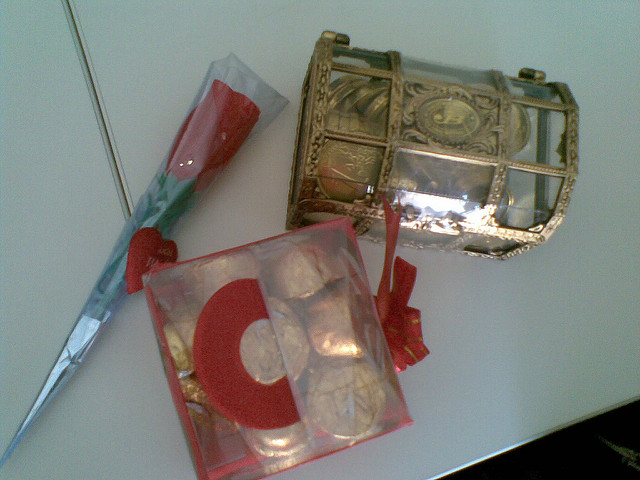 Valentine’s Day, which is the Feast of Saint Valentine, has romance even at its origin.

Valentinus, the namesake of the day, was imprisoned for performing weddings for soldiers, which was forbidden as Emperor Claudius II believed that single men were better soldiers than those who had families. Legend has it that before his execution, he wrote a letter to his jailor’s daughter signed Your Valentine, which lives on today as we give valentines cards to one another.

Valentine’s Day got closer to what it is today during the 1900s when lovers began to show their feelings by giving each other flowers, confectionary, and sending special cards.

Not everyone is into celebrating Valentine’s day, however – one of such person is Alison: “I think V-day is a load of sentimental clichéd capitalist shit and if you need a designated day to feel loved by your partner then perhaps you are not in the right relationship. A bunch of overpriced roses and chocolates once a year does not a relationship make.”

The gift that Simone put together for her boyfriend, Lamin

Alison may have a point, with more than half (52.8 per cent) of Brits spending money on their other halves, at an average of £28.45 each.

Fellow non-celebrator Kirsty worries about the day losing its religious roots, saying: “There is an issue around the secularisation of a saints day, much the same way as St Patrick’s day. Valentine’s day is supposed to be Saint Valentine’s day, so it’s the erosion of religious feast days into commercial events. I know non-religious is the majority opinion and one which I have no argument [with], but these are Christian festivals.”

Another concern is how single people feel, and how the day could put pressure on those who are in struggling relationships. Kirsty also feels that the value of a couple’s love should not be measured in how much is spent and has fears that some people will feel that their Valentine’s gifts weren’t good enough.

“It’s a big load of profiteering, pink, fluffiness and I won’t be doing it. Plus, for people like me who don’t have a romantic bone in their body, it’s quite frankly embarrassing to publicly declare one’s love forcibly on a given day because that’s what you’re supposed to do.”

However, some are still keen to keep the tradition alive. One young woman, Simone, described the process of choosing a gift for her boyfriend as “the most stressful of [her] life”. The couple had put a priority on the day as they’d both started new jobs working many hours, and hadn’t seen each other much since Christmas, whereas they usually saw each other often.

Simone says: “For me, every time I buy Lamin a gift, it has to be something that, when he receives it, he knows that I really thought about him as an individual and that I pay attention to what he likes because I genuinely believe that it’s the thought that counts”.

Wanting to avoid clichés, she spent time thinking about the what he enjoys; Oreo biscuits, and his boxing. As boxing is a sport where weight is important, the only restaurant where Lamin can go for a cheat day is Nando’s. Inspired, she made him a hamper with a variety of the South African restaurants’ sauces, and Oreos alongside a boxing canvas.

After the hamper was wrapped she realised that it looked store bought but hoped that he would realise that it was catered specifically to him.

“I just wanted him to be surprised, but also make sure that it was personalised for him and have the romantic element of it being personally handmade for him too”. Handmade gifts were in abundance this year, with mass-produced cards staying on the shelf in favour of women getting crafty.

Mother-of-one Sydney had a family-focused day instead of her and her partners’ usual extravaganza, who thinks that there is sometimes a pressure.

“Even though I have toned it down loads than previous years … the plan was still just to stay indoors … But I’m every marketing managers dream. This week, I walked past all the cards and decorations and I [almost] couldn’t help myself and knew that once again I’d be turning it into a ‘thing’.”

Whilst usually the couple go all out for one another, this year they decided to avoid the drama that goes with it, and stay home and cook a meal when her partner returned home from work. Prior to the evening, she and her son had spent the day together making their own cards and decorations. 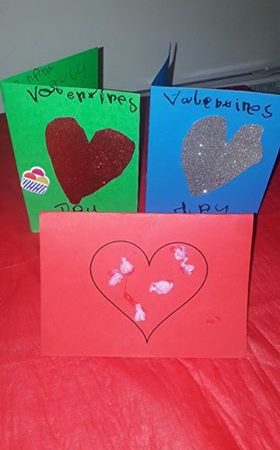 Cards made by Sydney and her son.

It was important to Sydney to include her son, who really enjoyed the crafts. However, even though they had planned a more relaxed Valentine’s Day as a family, the pressure crept back in.

“It was all pretty chill and laid back. But then at one point, my son said his steak had too much pepper on it and my heart dropped. For a minute I felt like I had absolutely ruined Valentine’s dinner.”

Sydney went on to say: “Usually I’d just say no worries and do some last minute nuggets for him instead or something, but I guess I had visualised wanting it to be ‘perfect’ [and] I ended up being super sad. But quite quickly after I realised mine didn’t have as much so we swapped and he was happy so I felt good again.”

Whilst many people are cynical towards Valentine’s Day, to some, it is a valued opportunity to celebrate one another. Sydney sees the day as another reason to decorate and get all together, as she enjoys festivities in general.

“My partner never really experienced any kind of holidays properly until he was with me and now he really gets into the swing of things. So having dinner together means he’s always a little excitable which adds to the niceness. My other half doesn’t drink either, but [he] sat down and drank a bottle of champers with me so that was fun”.

On reflection of her Valentine’s experience, Simone says she felt magnificent. “I know Lam (Lamin) doesn’t really care about Valentine’s Day but he booked and planned things just for me, so him being so selfless just made me so appreciative and ecstatic“.

These expressions of love show that the true spirit of the Feast of Saint Valentine is not completely gone, and hopefully, this renewed trend is here to stay