Similar to the experience only a skilled dungeon master could provide, when sitting around the table with friends. If you’re thinking about it, it is possible to create. The open-world that DOS2 has created knows no bounds and will both punish you and excite you.

After putting 40 hours into Divinity: Original Sin 2, I found myself in a heated discussion with a rat in the dungeons below a destroyed building, begging me to reverse his curse. My party members were unsure as to why a rat was locked away here in the first place, but they didn’t have the pet-pal trait, they couldn’t understand the pain this rat was in.

I cast the most suitable spell I could, using up some of my valuable magic. Once the light of my spell has dimmed I was left staring at a dead rat, and a disappointed laugh from fellow party members. A couple hours later we found ourselves talking to a chained, quivering, dragon.

Our previous hours’ experience of this game has led to us already setting battle stations most appropriate for our range of classes. Whilst approaching the dragon, expecting it to lunge from its chains and break free into combat, we braced ourselves for what was going to be an extremely tough battle.

Once close enough the dragon winced and cried for freedom. He growled through a painful curse about a witch, who would later destroy us, for his current trap. He was noble, proud and kind. With an entire history of his own. This, we strolled past by as a sheer accident.

Rivellon, the world in which Divinity: Original Sin 2 is set, is full of  surprises. When it isn’t filling your head with riddles, found on pieces of parchment in the local taverns, it is testing your morals against your party. The freedom of having your own choices affect your story and allow you to come out as hero or plot against them as villain against your friends. 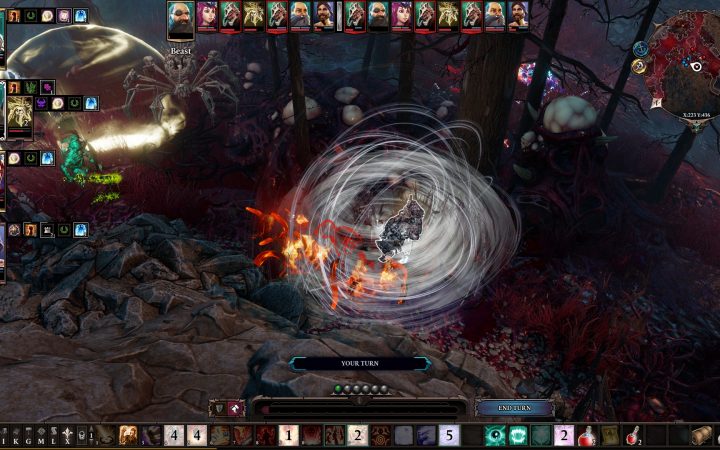 DOS2 allows for parties of up to four players to play together online in the same world running their own chosen character design. Commonly this means play for the party and stick together, however it allows for so much more than that. The truly open world possibilities can cause you to be leading different adventures although your goals are primarily the same.

My party consisted of an elf, two dwarves and a witty but undead human – each character has the possibility of becoming undead, creating an interesting twist to the already complex traits of the different races.

There are six pre-made characters with their own origin stories and quest lines, these are also available as companion’s early game, if you manage to interact with them in your own story. You can create a character entirely of your own choosing, which can change throughout the game also. You have choices to create a custom class from the different selection of tags, attributes and skills.

Dependent on the class and race you choose, this will affect interaction and combat with the non-playing characters (NPCs). In our party was Fane, an undead-human and origin character, whose hurtful sarcasm would leave me breathless. The dialogue that Fane would gather in most situations is more extensive than what our own creations would receive due to previous relationships Fane built.

Sometimes this would lead to extra trouble, especially when NPC’s looked at Fane’s undead face. However, when talking directly with either of the dwarves or elf, it was often met with open dialogue and the chance for the NPC to create an opinion on my character.

Now, this is not always a good thing. Some poorly handled conversations with NPC’s have left the entire party in disastrous situations. Being attacked and surrounded by eight guards who didn’t like the tongue I had on my first encounter can leave you struggling to progress in a quest, if you are as certain as me as to not reload to a previous save.

Individual quest lines are bursting with lore and knowledge about the world, revealing more mysteries and unsolved issues, giving important character building moments. By no means is quest progression always easy. Larian loves to leave you wondering what the right direction is to take.

Our journals quickly became filled with areas of the map which we need to explore, becoming very easy to lose sight of your main quest amongst the lists of quests you have picked up. Although the quests themselves allow you to divulge into your characters role, the journal becomes hard to construe. 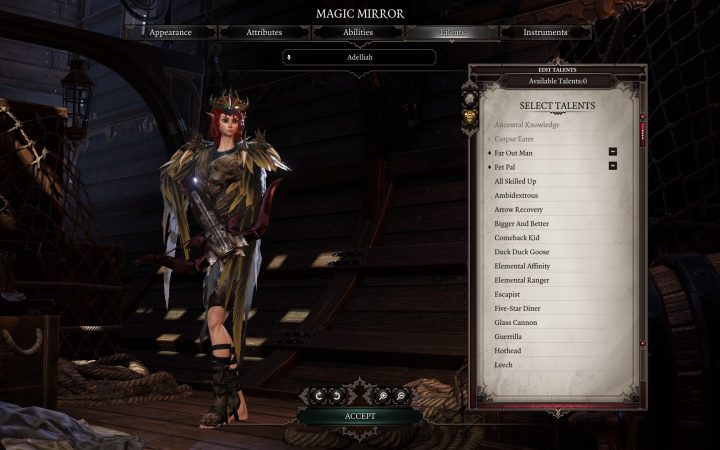 When backtracking to find more information, NPC’s are unhelpful with vague information; they do, however, bring abrupt changes to the story. Minor conversations with even a beggar, in a town you’re residing in, can change your relationship with a faction ending a quest line. This adds weight to the decisions you make, adding consequence to every encounter or decision during conversation.

Conversations with the NPC’s are fully fleshed out with the incredibly done voice acting and narration. Your adventure and interactions are read out to you by the faceless whimsical narrator who seemingly goes out of their way to not let you miss a detail of your own story.

The voice acting adds to a world that already gives so much to the imagination. Larian nearly went against the use of voice acting in DOS2 but after recording more than one million words, even down to a simple discussion with a dog, brought emotion to simple interactions.

In the first act, our party were searching for a way off the island that held us captive, we came across a dog wandering on the beach. Whilst chatting the dog became sad and whimpered for its friend. This seemingly not-so important interaction became unique later when lost in a dungeon and faced with an attack from guard dogs, one of whom was the lost dog’s friend, sent down to the dungeons to be experimented on.

Without that earlier interaction the dogs would have been forced into combat with the party for us to proceed through the dungeon. The connections that exist in the writing of the game are unbelievable. You will find yourself gasping from realisation more than once when a consequence of your actions are seen before you. Eventually.

DOS2 is not only a well-thought out story, but Larian have provided multiple avenues in which players can achieve a similar outcome, dependent on skill sets and previously made choices. Our party opted for teleportation, a skill which is easily obtainable early game. Allowing for the skill bearer to move party members or objects within a certain radius over walls, through doors or just closer.

Alternatively, an un-dead character has the increased ability to lock pick with his boney fingers or a dwarf can climb through small holes, not suitable for others. This adds other dimensions to the possibilities of what the opening a door can do in this game. One characters ease can be another’s frustration.

DOS2’s main co-op, or single player, questline is a quest to godhood for your race. You are a sorcerer with a divine calling, whose magic attracts ‘the void’, an evil horde of beasts looking to feast on your power. First you are captured and put on a prison island by a faction called ‘the Magisters’, the consistent villains throughout, to stop you from being able to use your powers.

Your first mission is to escape the island which leads you into an unforgiving battle for survival of the gods. The overtone of the main campaign is the suppression of your power with the main battle of freeing yourself and others, from the clasp of those whom obsession with power has driven them mad. 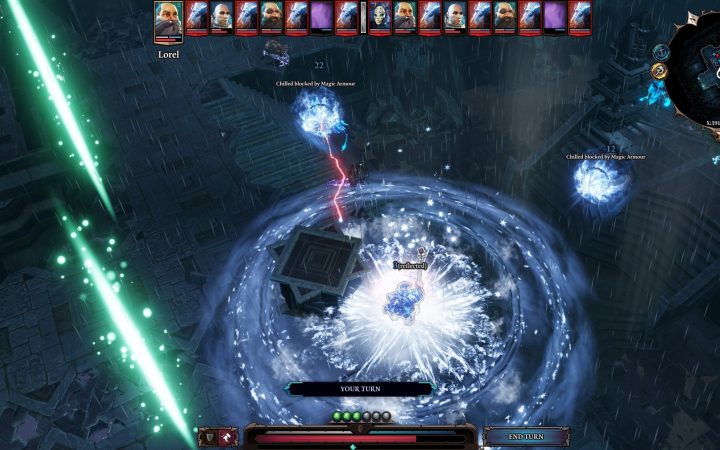 True jewels of the game are hidden amongst your personal side quests. Racial pride will come into play when you see your fellow elves hanging from wooden boards or slaughtered whilst defending their own. Your party dynamic will be questioned when they ultimately become your competition growing stronger alongside of you.

Rivellon will leave you in almost consistent turn-based combat.  You will be facing hordes of giant oil monsters which will light the entire arena ablaze when you accidentally use your fire enhanced wand. The script within the turn-based combat and individual battles will show an intuitive combat AI created by Larian which makes each battle unique, even on re-attempt.

Much like the rest of the game, the combat involves intense choice making. The surprises in battle can make it hard to plan out combat until you have already lost. With the dead rising out of the ground on a quiet passage in the forest soon turning into a bloodbath for your entire party the spells and skills you place on your characters with consistent levelling become ever so important at crucial moments.

Combat in DOS2 is a test of patience. The fights can be extremely testing especially when letting your party wander too far into new areas. The combat system however is flawless, easy to use and understandable. Your skills are listed at the bottom of the screen with noticeable cool-downs and information easily attainable even during combat.

The learning curve of Divinity: Original Sin 2 from a new RPG player is enough to deter from starting up the game for the first few hours. However, mistakes within the game are easily rectifiable through use of the vast array of options to choose from in almost every situation.

The depth of DOS2 is intimidating, possibly overwhelming. This is as close to an original Dungeons and Dragons experience without getting the dice out.

Larian promised a lot for Original Sin 2 during its Kickstarter campaigns to expecting fans and has followed through creating a game so expansive it is almost timeless.

All images by Liz Gillings