On the International Day to End Impunity for Crimes Against Journalists, at London College of Communication – students, refugee journalists, and lecturers were told a special guest was visiting.

While we were patiently waiting, and socialising, the door opens, everyone is eager to see who this ‘special guest’ is.

Followed by a security team, known to all by his signature blond hair – it’s Boris Johnson.

The UK’s Foreign Secretary greeted everyone in the room. Asking us all to introduce ourselves, most of us chuckling nervously while indulging in an awkward small talk.

While introducing ourselves, we mentioned our home countries, some of the refugee journalists are from the Middle East, Bahrain and Syria.

Being from Libya and Turkey, Boris Johnson asked repeatedly if Defne Saricetin and myself were refugee journalists, but we confirmed that we are journalism students at London College of Communication.

The former Mayor of London announced that the Foreign and Commonwealth Office announced will fund press freedom around the world.

“The foreign office is giving UK cash, a million pounds towards the support of people who want to protect the human rights of journalists,” Johnson said. “This day is internationally the day in which we call for no impunity for those governments and those countries that are involved in the killing of journalists.”

Due to the fact that it was the International Day to End Impunity for Crimes Against Journalists, it was only right to talk to the Foreign Secretary about freedom of press.

I had chosen to discuss freedom of press in my home country and so did Defne. As I mentioned my aim to the former Mayor of London, he simply replies “Although I have been to Libya a couple of times, I haven’t studied the Libyan media.”

Due to Johnson’s tight schedule, we could only ask a question each, and I wasn’t able to ask my question. However, as I am very talkative and so is he, the ice-breaking conversation lasted longer than expected.

Mainly discussing Libyan politics and the critical conflict undergoing. He laughs and says “What a country, it has two parliaments, three prime ministers, four governments.” Although there is no humour in the fact that Libya is currently undergoing civil war and civilians are dying almost every day, I laughed back anxiously. “For six million people it [Libya] has a lot of politics.” 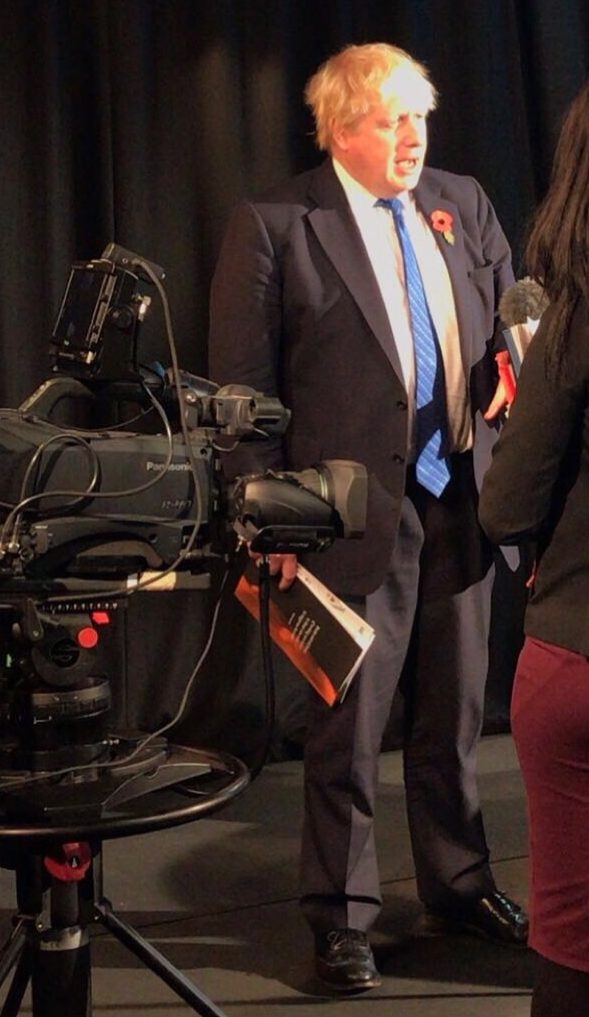 The former editor of Spectator magazine continues “One of the problems in Libya, is that the other players around the world have different views on what should happen. The crucial thing is that for them all to shut up and allow the UN to bring the bodies together.”

Although it was a very quick chat, Defne describes our interaction as an “awkward Ping-Pong match.”

Luckily for Defne, she gets to ask her question. “Turkey is currently the biggest imprisoner for Journalists. What does the British Government think about that and have you taken any formal actions?”

Johnson responds by saying “I’m partly Turkish myself,” and continues “we raise this regularly with our Turkish Friends, with the Turkish ministers, with the prime minister and president Erdogan.”

Despite the fact that Johnson hasn’t clarified if the UK has taken action he continues to express the importance of free journalism in Turkey.

“Turkey is of huge importance, it’s a country that is geopolitically critical, and the UK is a friend of Turkey. We want to be able to have influential and friendly relations with Turkey. We think that the future for Turkey is part of the great democratic freedom loving group of nations. It is a great NATO partner and contributor. We’re keen to preserve good relations whilst being able to say to our friends when it comes to journalism, when it comes to human rights, we have very serious concerns.”

I spoke to Journalist Jamie Prentis, to understand more about the freedom of press in Libya. Prentis is a 25-year-old British journalist, currently reporting for Libya Herald.

When asked why he chose to report for a Libyan publication he responds “Libya is a fertile ground for reporting, with every imaginable story and theme possible. In comparison to say Iraq and Syria, I felt there were fewer journalists covering Libya.”

As I was comparing journalism now to before the Arab Spring, Prentis says: “Press freedom in Libya is abysmal. Journalists are intimidated, threatened, assaulted and sometimes killed. Libyan friends of mine have had to disguise their names or even stop working out of fear. Many feel they have to ignore certain stories over fear for their lives.”

The University of Nottingham alumni highlights the fact that the situation in Libya is completely different now and is difficult to compare to the past: “Libya is so factional and it is very hard to mention many truly impartial news organisations. Part of this stems from the fact that certain news providers will be pushed to write the stories their owners want to hear. Another problem is that with some outlets being pushed out of the country and international interference in Libya rife, they feel ‘inclined’ to follow the foreign policy line of the place they are in. So if someone is based in Turkey, they might feel pressured to approach Libya from a Turkish point of view.”

So does the government encourage free journalism? “The Libyan Government of National Accord hasn’t really made many comments about the press. But they are not the problem and barely control any part of the country. The issue is the armed groups who do control the country,” Prentiss says.

He compares journalism performed in Libya and the UK and says: “In the UK if you write a story that is critical of a certain person, place, position etc. you could be criticised for the piece you have written but probably nothing more. If you do that in Libya, you could get shot”

The 25-year-old believes the significance of free journalism in the development of Libya. “A free press is very important for the future of Libya. Disinformation, allegations, and rumours in Libya have caused a lot of trouble only help to distort the truth. A free press means journalists can operate without fear and can do their best to fully tell the truth to the wider public.”

Many governments around the world still do not authorise freedom of press, according to Reporters Without Borders, 71 countries were rated as the worst. This includes both Libya and Turkey, where countless journalists have been murdered and imprisoned.

By Lauren Gordon
1 Mins read
In this podcast, we talk to two journalists about getting into industry after university and their experiences so far.
Politics

By Ana Drula
9 Mins read
Refugees flee Ukraine as Russia invades, and at the borders, neighbouring states work together to shelter and assist those in need.
21st-century trends