The right to happiness

Thomas Jefferson, the third President of the United States, once said: “The care of human life and happiness, and not their destruction, is the first and only object of good government.”

However, when looking at the latest World Happiness Report, where the UK has barely reached top 20, it might seem that the government of these islands has more important objects to consider.

But what exactly can our modern government do to make people happier?

Professor Lord Richard Layard, an economist and researcher, dedicated a whole book to this topic, arguing that politicians should be moving in exactly the opposite direction to where they are now.

Although there is no hidden meaning to the word ‘happiness’, its definition can still vary from person to person. With the help of a range of sociological information, researchers managed to identify the factors that influence people’s happiness and place them in order.

Apart from the obvious economic factors such as income and employment (and more specifically the quality of employment), the biggest factor that affects general happiness is mental health.

In the UK approximately one-in-four people experience a mental health problem each year. but it seems like it is convenient for the government to ignore these issues as it is unlikely that people with anxiety and depression will cry for attention and protest outside of Downing Street.

However even if issues such as anxiety or depression are ignored, they can eventually develop into a number of physical problems, that in turn will burden an NHS that is already struggling.

That is one of the biggest arguments Richard Layard tries to push forward: “If we prioritise mental health to physical health we can get rid of a number of problems before they appear.” The best time to cut the problem at its roots would be to start in one’s childhood.

In his latest book The Origins of Happiness, published on February 6, 2018, Layard and his co-authors proved that child development factors are the ones that predict adult satisfaction with life, that is emotional health.

Furthermore, from their research, it became evident that secondary and more so primary school are the places where the initial tendency for a happy adult life begins.

Referring back to the rating of factors that make people happy, we can see that academic achievements in education come last. Layard claims: “This is really quite sensational because there’s been such a tendency to say that schools can teach people maths but they can’t teach people to live.”

However, if we look at the statistics, schools are exactly what affects whether people will find their lives enjoyable in the future. Just not in the way we are used to thinking: not that academic progress matters, but the quality of teaching and the way schools develop person’s character.

Each year the NHS spends more than £10 billion on adults with mental health problems. If funding is what matters most to modern politicians, it would be even more logical to think about preventing the problem rather than spending a fortune on solving it.

That gives a definite scope for policymakers to consider developing if they really want to follow Jefferson’s definition of a good government. “These are not very expensive things to do. I mean they cost the hell of a lot less than HS2. We should be cutting back on these materialistic forms of expenditure in favour of things that really matter to people,” Layard says.

That’s not to say that the government is completely ignoring the issue. Despite the sensitivity of mental health, it is agreed that it should become a comfortable topic to speak out on, a position the government agrees with.

The problem is that the action is often taken only when issues have grown too big to remain unnoticed. This January, for example, Theresa May appointed a Minister for Loneliness, to lead on developing the strategy, research and, eventually, help and support for those who find loneliness their reality. That is for the nine million people around the UK out of a population of 65.6 million.

Loneliness is known to cause stress, anxiety and depression and is nowhere close to the definition of happiness. If we consider mental health problems as those that prevent us from being happy, they should be put off the equal footing as physical, as they are one of the factors that actually cause the latter.

It has been proven that in a group of people, those who feel happy live longer even despite obvious health problems. But happiness is not the same as just being well. The definition is too subjective so there is nothing left to do but generalise.

Sadly, in rich Western countries, like the USA, people’s happiness significantly depends on a comparison, usually of one’s income, house, car, garden, to your neighbours’, friends’ and even strangers’. The effect of income is much more important in poor communities where even a slight change in the quality of life is very noticeable. In affluent communities, where the problem of income is already solved, people start realising that their millions are not enough. 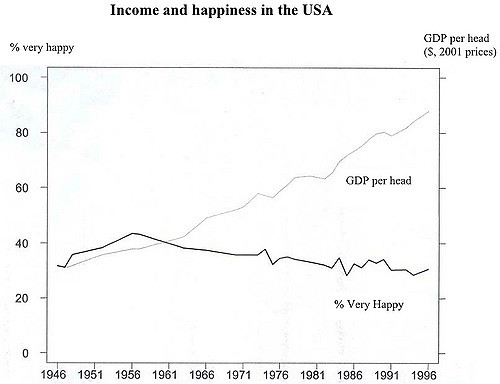 Despite the research in the last century, very little has changed in government priorities {Flickr:Jorge Cortell}

It appears that the Easterlin Paradox is true after all. In the early 1970s, American economist Richard Easterlin’s research indicated that even as the society gets richer, people are not getting any happier. When reaching a certain point of economic development, affluent countries find that the level of happiness of their citizens has reached its roof and stagnated.

Modern leaders make re-election their priority and try to become more successful than the previous leadership, leaving major concerns of the citizens in the background. Although the progress is one of the ways towards happiness, perhaps this progress just is not economic.

While we consider the thought of a happy population as utopian, a small country of Bhutan lives that utopia. Very remotely, quietly, almost invisible to the world’s conflict and crisis. During the Global Dialog for Happiness, Tshering Tobgay, the Prime Minister of Bhutan, very clearly explained the viewpoint for the state:

“Bhutan is a small country. We have one of the smallest economies in the world and one of the smallest population. We do have our constraints. But we’ve been blessed with extraordinary leaders. Our enlightened team who has consistently made the happiness of the people their main priority. This was most clearly demonstrated when way back in the 1970s our fourth king famously pronounced that for Bhutan gross national happiness is more important than the gross national product,” Tobgay said.

Economic growth in the country is based on three principles: clean, green and equitable. This includes free health care and free education. Protection of culture, the issue with which Europe is struggling the most now, is also a priority. Each country has its own unique traditions that it is important to preserve; traditions that we as citizens identify yourself with since childhood.

That is a stumbling-block for the modern equality trend: how to protect the uniqueness of each country if we aspire to the demolition of borders and closer integration. The balance should be just in the right place, otherwise, there is a risk of losing the sense of belonging, the sense of identity and thus, emotional stability and happiness.

There are so many speakers out there explaining what happiness truly is and how to reach it. But if you look closer, they are often individuals that are not connected to government institutions. They are likely to be religious authorities, such as the Dalai Lama for instance, or celebrities who are seeing themselves as advocates for peace in the world.

Perhaps, if the priorities of the politicians would switch from involving the country in yet another armed conflict to helping the children to become happy and healthy citizens, the world would be much happier.