Drawing for the voiceless in Yemen 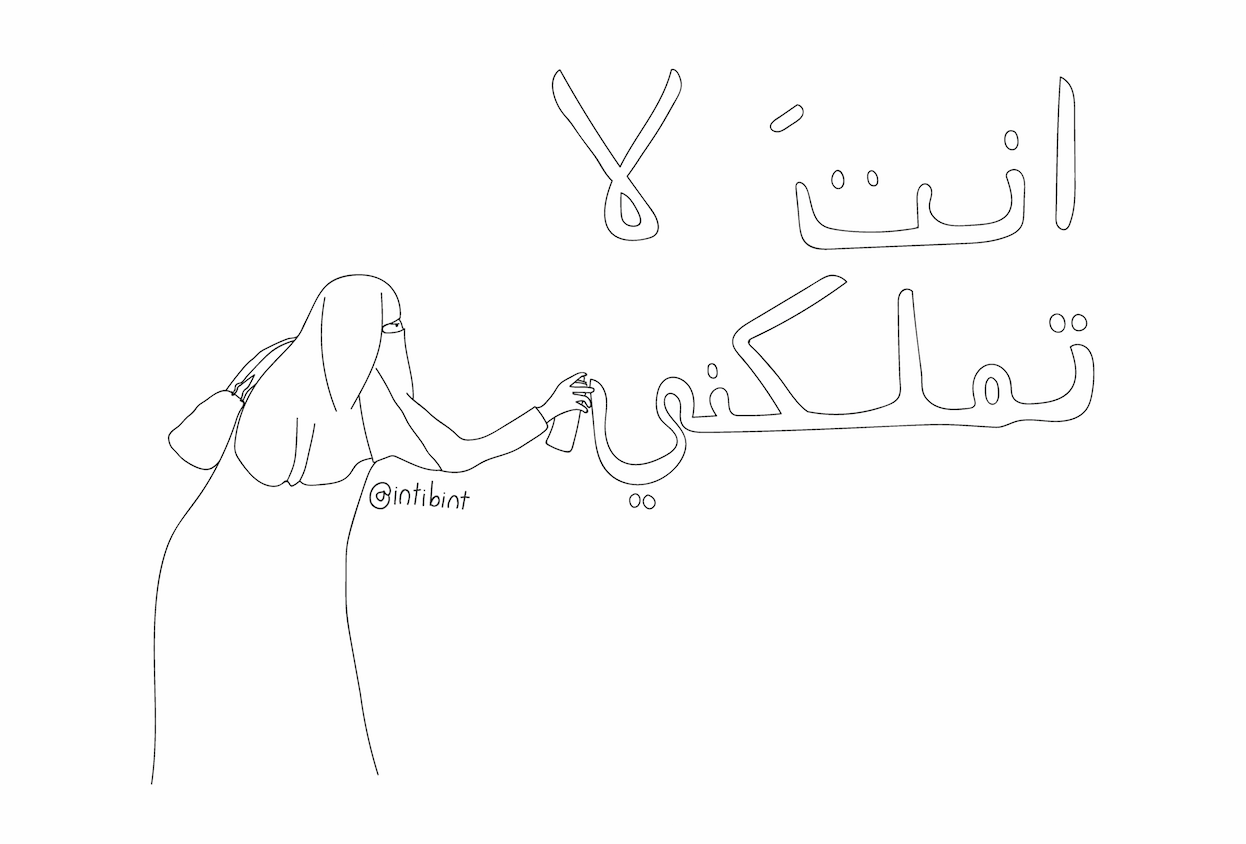 Since 2015, Yemen has been enduring a civil war which has now become one of the ‘largest humanitarian catastrophes in the world.’

As a result, the country is considered as one of the poorest in the Arab region after being forced to the brink of famine and wide-spread poverty.

The depth of the crisis has been lacking global media attention, the news outlets are prompt to cover the political controversy overlooking the alarming statistics of civilians dying, and in need of urgent care which continues to be on the rise.

It’s an ongoing war between ‘the Houthis’ (a political-religious armed movement) and its government, backed by Saudi Arabia, and has become a conflict involving attacks against innocent Yemeni civilians and therefore, has been compared to the extreme scale of the atrocities happening in Syria.

In 2017, it was reported by the World Health Organisation that 2,200 people have died from cholera; there have been one million cases in Yemen, the largest outbreak of the disease in recent history. The UN estimates that more than 10,000 innocent people have been killed and three million more have been forced to flee their home.

Noha Al-Maghafi, 23, is a British Yemeni artist and student studying her Masters in Migration Mobility and Development at SOAS University of London. Noha uses her talent in art to voice the sufferings of the victims in Yemen to raise awareness, she talks of her own experiences in coming to terms knowing her own family were stranded at the city of Sana’a, at the time and place it had all began. 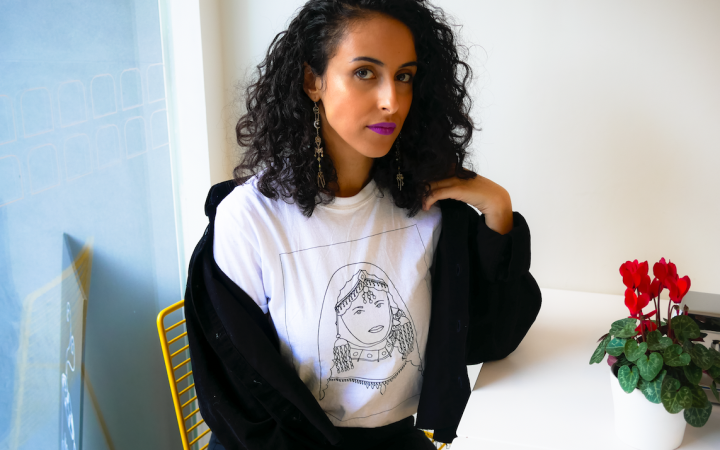 When did you become politically aware of the civil war and conflict in Yemen and the chronic illnesses that the civilians have been suffering from since?

The war started in March 2015 whilst I was studying my undergrad at Sussex university in Brighton. My immediate family (mother, father, sister and brother) were in Sana’a (Yemen’s capital), where the bombing started. Ever since then, I have watched the situation unfold closely. We talk about it at home sometimes, and occasionally get into contact with my family still based in Yemen to stay up to date with how they’re doing. Also, my older sister Nawal Al-Maghafi is a journalist who has consistently reported in the last two years regarding Yemen which helped keep me informed on the reality of the situation.

Can you explain the objectives behind ‘Yemeni Peoples Project’. How does your work comment on current social or political issues in Yemen?

The Yemeni Peoples Project (YPP) is a series of illustrations accompanied by texts in order to shed light on the experiences of young and old Yemenis, since March 26, 2015.

As mentioned before, the war began and my family were there, this was extremely difficult to handle. I was a university student at the time and it sort of put life at a standstill. The thoughts “my family could die any moment, I can’t do anything” kept haunting me. The first thing I did was go out and start a petition thinking if I can’t stop this on my own, surely if I can get millions of people to sign the petition, we can stop the war and this nightmare will end.

But to my very horror, barely anyone cared… I’m not joking. It broke my heart. I hadn’t slept in days, my mum and sister had been calling me (and my other sisters who were overseas) begging us to find them a way out. The petition was the only thing that kept me going.

In hindsight, I understand that it didn’t literally mean people don’t care, and I also admit that I do the same at university; I walk past petition stalls and don’t stop every time however, that doesn’t mean I don’t care. But it was that feeling and that moment right there that pushed me to wanting to use my love for art to make something that said: “NO! people do care! Your suffering will not go unheard!” to anyone who felt hopeless. There are people who care, it’s just a matter of finding them. 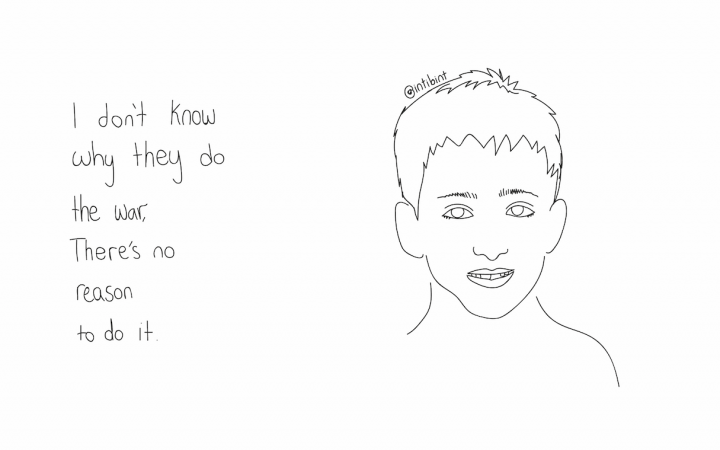 The project started as a series of portrait photos, sort of like the ‘Humans of New York’, where I’d take a photo while they tell me their story and I’d attach it with the image. I started by shooting my family, but it became too overwhelming. I felt it to be too invasive, especially because having the conversations with them brought up many memories which would end in us crying, rather than taking photos. So that project was discontinued.

To be honest, the idea to start the project as a series of illustrations came to me suddenly. While thinking how can I use illustrations to raise more awareness for the Yemen crisis, then I realized I already had a project waiting to be completed so, I just got on my laptop and got started. It’s been heartwarming ever since due to the wonderful response of support and solidarity with the Yemeni people! I hope it grows bigger so people everywhere can be made aware on the inhumane treatment of the Yemeni people and Yemenis everywhere can know their struggles are not being forgotten!

It terms of political issues, I try to mention that factor the least. I don’t want to undermine the experiences of the people by bringing in something else, such as politics. This project is about the people. It’s about their feelings, their pain, their losses and their achievements. Not about politics and power.

How is your work and creativity informed by certain concepts or themes from your cultural heritage?

Having grown up in Yemen, the culture entwined with my Muslim background which bought along many expectations and boundaries, and this became very difficult for me. The social expectations of a Yemeni woman played a role in the art I produce. I channel the anger that comes out of arguments with my mother regarding marriage, what I wear, or whether or not I can stay out past 9:00pm as a 23 year-old, all in to my drawings.

The name of your instagram page is intibint translated to ‘you are a girl’. Can you tell us the reason for such a name?

The term ‘intibint’ literally means ‘you are a girl’ and this is a statement I grew up with. Not only from my parents, but by my aunties and uncles too. It has been a term loaded with social expectations and restrictions regarding how a female should handle herself. It infuriated me from a young age, I remember being the age of 10 in Yemen, and wanting to spend my afternoon playing in the back yard with my male cousins however, my aunty would call me in shouting ,‘intibint’ (‘you’re a girl’) so I should stay inside within the company of women eating tea and biscuits.

In my opinion, it’s a term used to keep the girl in her place. To keep her as the subordinate to the man, she will always be less than him, and is there to serve him. So she cannot be free to live her life and have the experiences she wants. I guess I decided to use it because I want to show that although ‘I’m a girl’ there are so many things I can accomplish, and I will never let such a term hold me back. Ever. 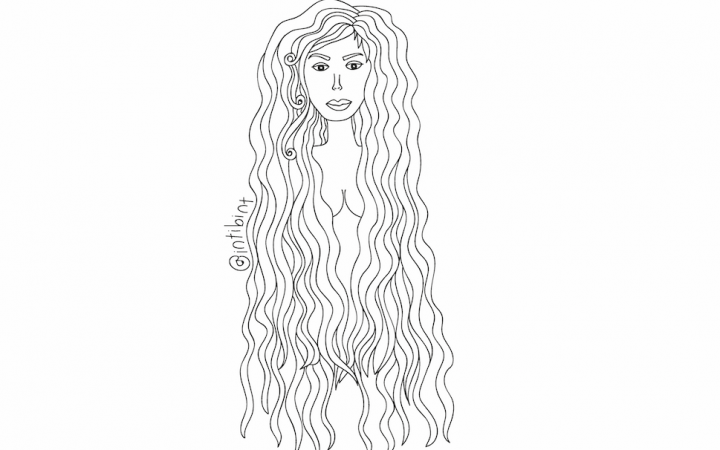 In regards to the conflict happening in Yemen, do you think there is enough being done to resolve it?

I think that it’s not covered enough on the news. And that is crucial. It’s as simple as that.

The profits raised are contributed towards Mona Relief, why specifically that organisation?

I was recommended Mona relief by my two older sisters, one who just moved back to England from Yemen and another who is a journalist and is frequently in Yemen. I got involved with them when I started the T-shirt campaign in December and aside from the recommendations I got about them, it was also that I had already decided I wanted to go for a small charity rather than a big organisation like save the children or ICRC. Although I really respect the work these organisations do in Yemen, I want the money to be spent directly on people in Yemen, and as I am donating on the smaller scale, the money would make more of an impact with a smaller charity. However I am in the process of looking for a second charity to partner with. And inshallah (god willing), with time and when sales are even more consistent, I hope to partner with more.

Through what ways do you keep people up to date about your work, how have you navigated around the feedbacks you have received so far?

Instagram is the main way I keep people up to date and where I share my work. So far I have received just wonderful feedback and support from both people I know and people I have never met before. It’s honestly the most heartwarming feeling, it’s just a reminder that people care about Yemen and that means the world.

I mean the ultimate aim here is to bring a community of people together, who care not only about Yemen, but about all humans suffering it the world, and we can use our power as a community to fight for these causes, alone we are strong but together we are stronger!

To find out more about Noha Al-Maghafi’s innovative project and photography, follow her Instagram accounts @intibint and @nohaaalma