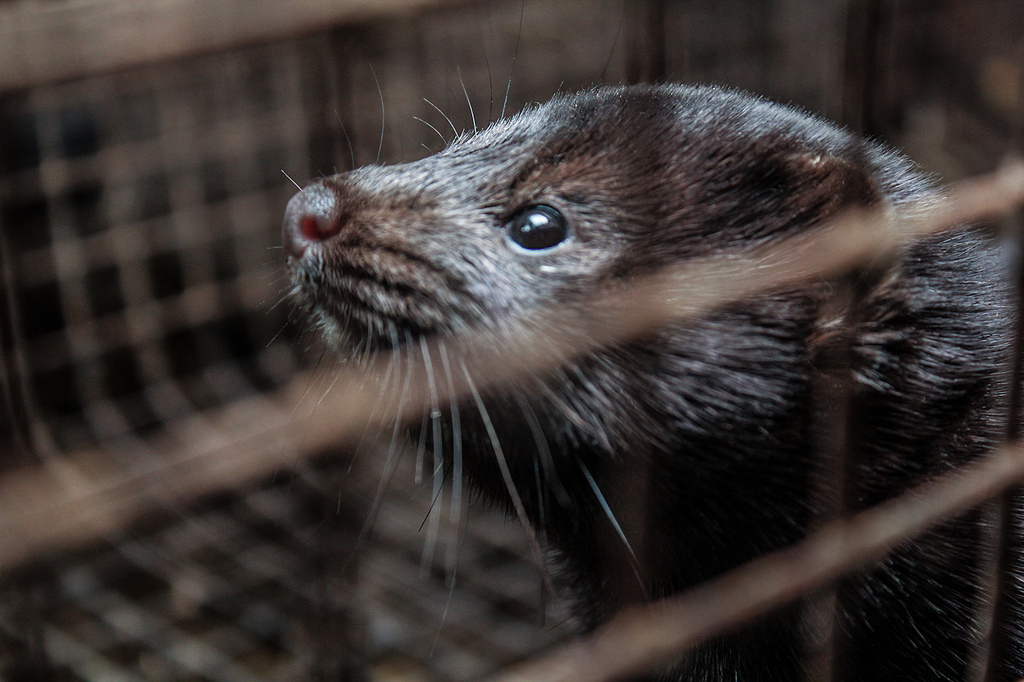 Several animal rights groups have targetted London Fashion Week (LFW) to protest the use of fur in shows. Whilst fur farming is banned in the Uk and 90 per cent of fashion shows no longer feature fur on the catwalk, there are still thousands of fur farms in Europe and the fur import trade is worth millions.

The International Fur Federation (IFF) in 2014, revealed the global fur trade was worth £24 billion and Fur Europe had revealed in their report that in 2014 there were 5,072 fur farms in Europe, a number they expected to grow.

Around 50 million animals are killed annually for their fur with major brands such as Harvey Nichols still selling imported fur in UK stores. Activists hope the protests this week will bring awareness to the growth of fur fashion to the public and designers will lead by example and ditch it on the catwalk. 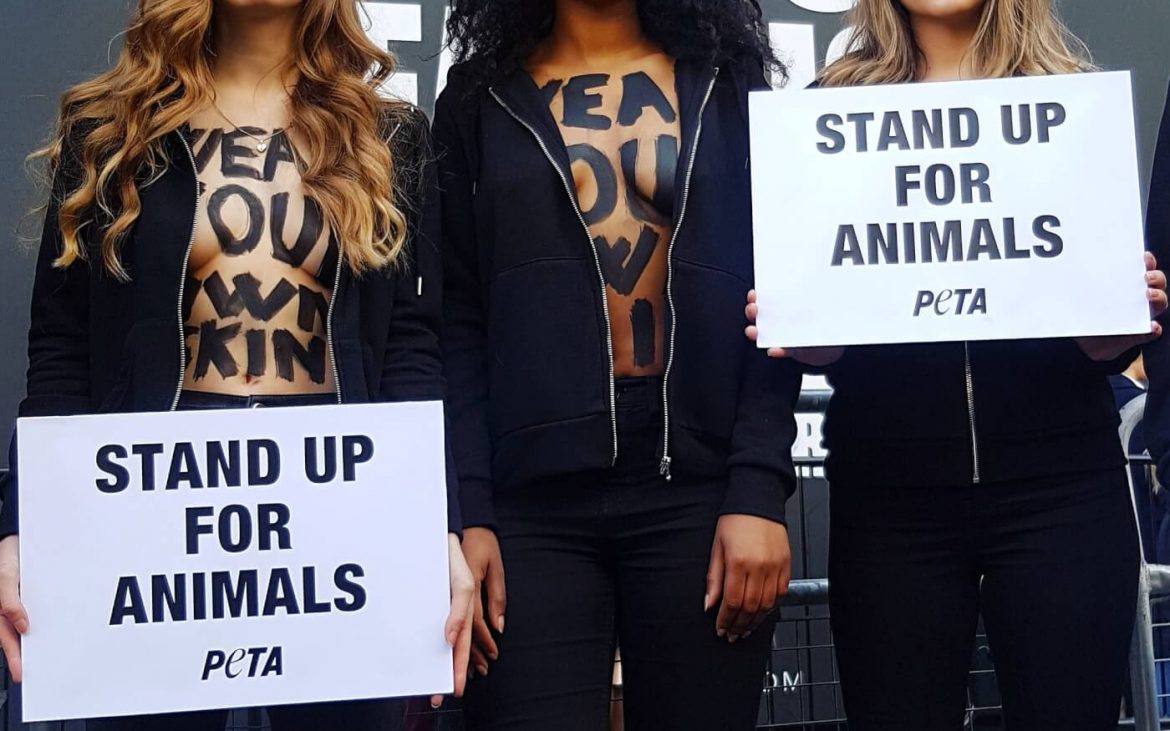 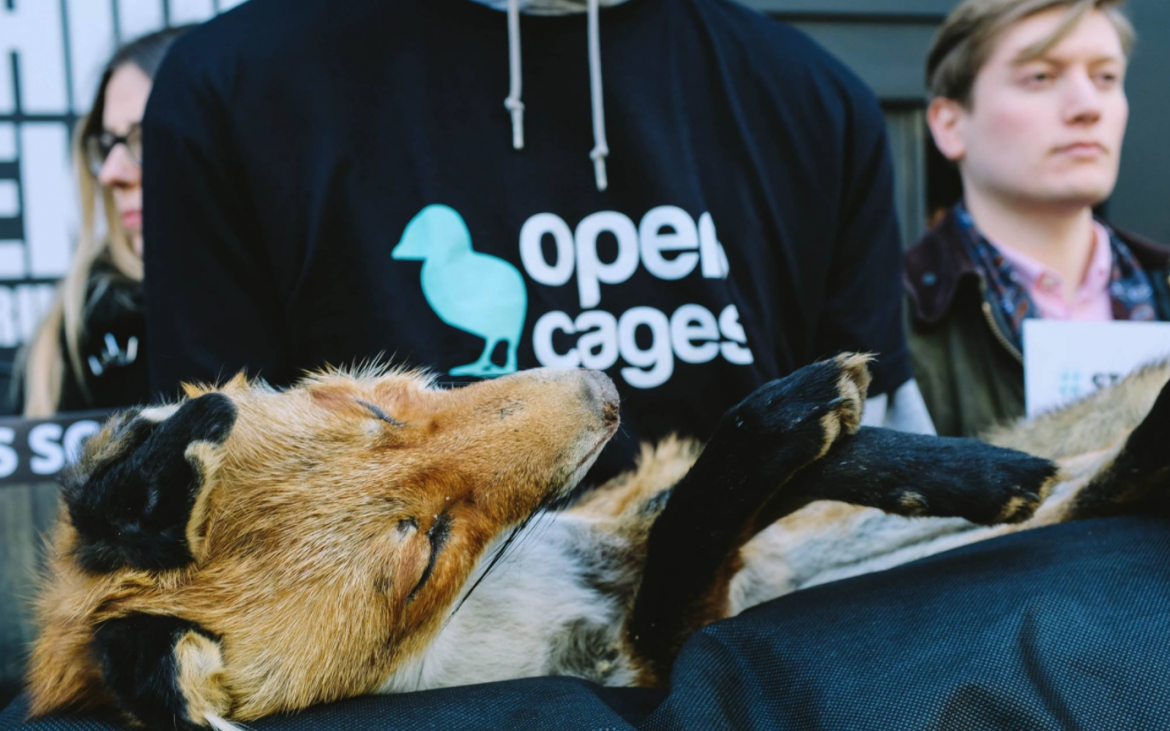 Animal rights groups People for the Ethical Treatment of Animals (PETA), Open Cages, Coalition to Abolish the Fur Trade (CAFT) and Surge were all present at the protest.

Open Cages drew crowds with the bold statement of a real, deceased fox, called Molly. Protesters shared stories of individual animals killed for their fur, their emotive approach rallying a powerful response from passers-by. They also have been promoting the hashtag #standwithferdynand and urging the government ban fur; Ferdynand is from their film Klatki: The Hidden Farms of Europe.

PETA was also seen stripping off for their cause. Brave bodies were seen painted with the phrase ‘Wear your own skin’. In a press release, 23-year-old naked activist Lydia Smyth said: “With so many innovative, high-quality vegan fabrics available, there’s simply no excuse for wearing an animal’s skin or hair.”

Since September 2016, Surge has been running an ongoing campaign demanding that the British Fashion Council ban fur from the London Fashion Week catwalk. The group protested for three full days chanting “Shame, shame, shame on you!”

CAFT who helped resource this protest told Artefact: “We campaign there, letting people know that rabbits, racoons, coyotes, foxes and mink are losing their lives for some fur trim on a jacket,” they said. “Whether these animals are farmed for their fur, or trapped in the wild, their deaths are painful and unnecessary.”

Although a survey by the RSPCA revealed 95 per cent of the UK public would choose not to wear fur, faux fur styles such as coats and keychains have become popular again. This became a controversial topic last year when Humane Society International (HSI) revealed high street brands such as Missguided and Boohoo were caught selling real fur on items they advertised as ‘faux’ fur.

Real fur has become cheaper to manufacture than faux fur as a result of production at an industrial scale in countries like China. Often the products sold in the UK are understated small accents such as cuffs, trims or tie-dyed bobble hats which are difficult to distinguish and are commonly seen at market stalls.

HSI has created a petition to ban fur imports into the UK and has stated online that they recognise the need to manage real fur falsely sold as faux and believe customers have a right to know what’s in their products, “as an urgent first step to burst the bubble of ‘fake faux fur,’ we would like to see the introduction of clear labelling of all animal fur items, from clothing to footwear and accessories. Labels should state the animal species and country of origin, as well as how the animal was raised/killed, as is already the case in the Swiss fur labelling law.”

HSI has created a guide to help people spot real fur. Real fur has pointed ends, a leather/skin base and smells like human hair when burned. There is no detailed species-specific EU legislation setting welfare standards for animals farmed for fur. Factory farms consist of stacks of small wire cages and animals that are bred for fur are wild for example ferrets and foxes.

Because these animals are wild they suffer in the small captive conditions, unable to perform basic natural behaviours such as running and hunting. Furthermore, the European Commission’s Scientific Committee on Animal Health and Animal Welfare (SCAHAW) has consolidated this and have stated: “In comparison with other farm animals, species farmed for their fur have been subjected to relatively little active selection except with respect to fur characteristics”.

Many consider fur a trend of the past in the UK with many celebrities shunning it all together, however, the issue now is a lack of awareness. Most Brits don’t realise their products contain fur, nor do they realise the scale of the import industry, and that Britain is simply outsourcing animal cruelty to other countries. This is why groups such as those at the LFW protest will continue to loudly reject fur farming and lobby for the ban on all fur in the UK.