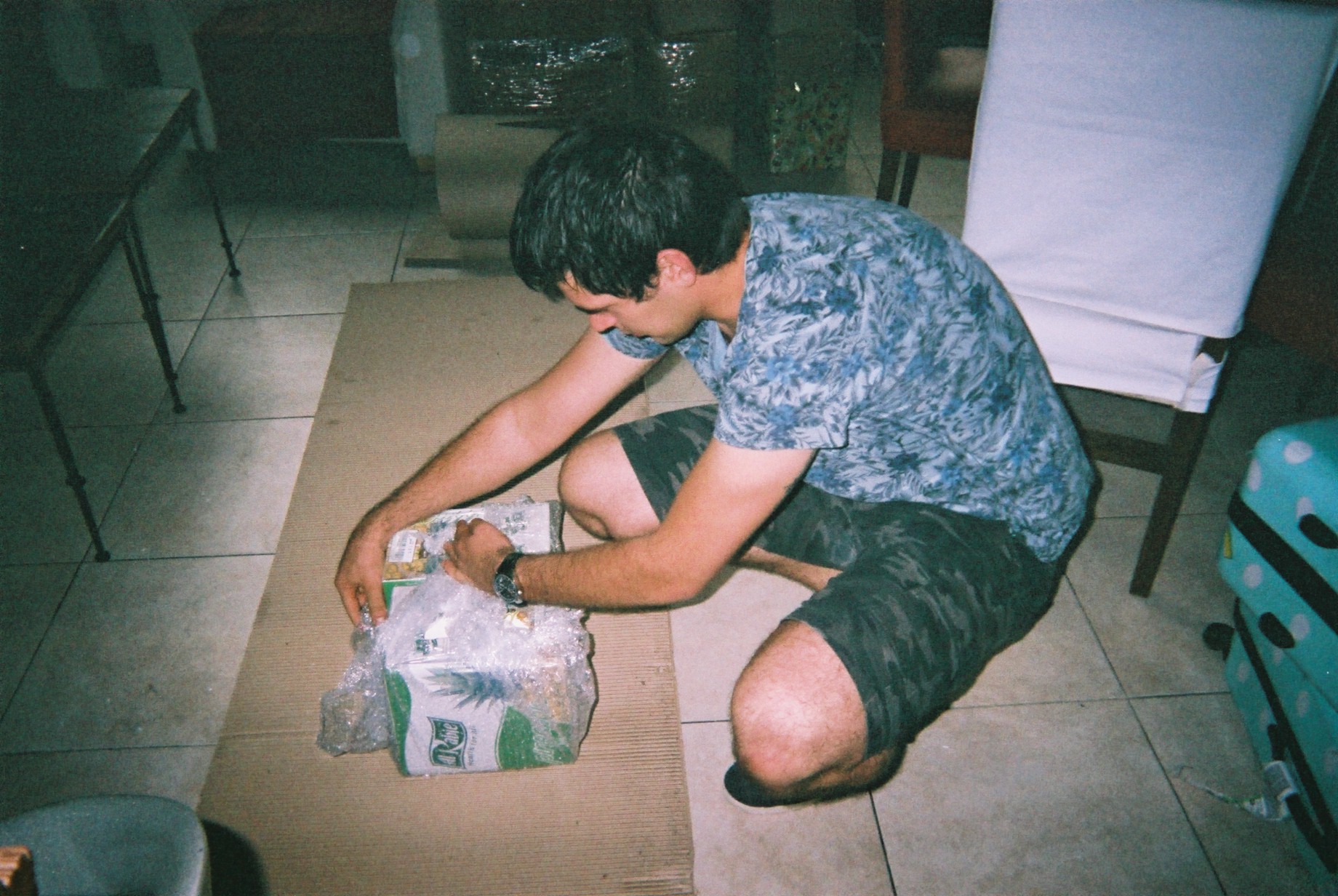 “Dear Angel, We have a shipment starting today. The flight departs to Mumbai this afternoon.”

This is how I travel for free. Actually, this is how I get paid to travel. I deliver packages from one country to another with a matter of urgency. Sometimes it’s as thin as a paper, other times it’s five over-weight suitcases.

I was working in New York City when I first became involved in this. I was in a meeting when my phone started vibrating, one notification after another.

I peeked to see they were from my brother. “Answer. Fast. Do you want to go to Tahiti?” I guessed he was planning his holidays ahead. “When?” I wrote back, typing under the table. “The plane leaves in three hours. Yes or no.” I didn’t ask more questions, “Yes.” 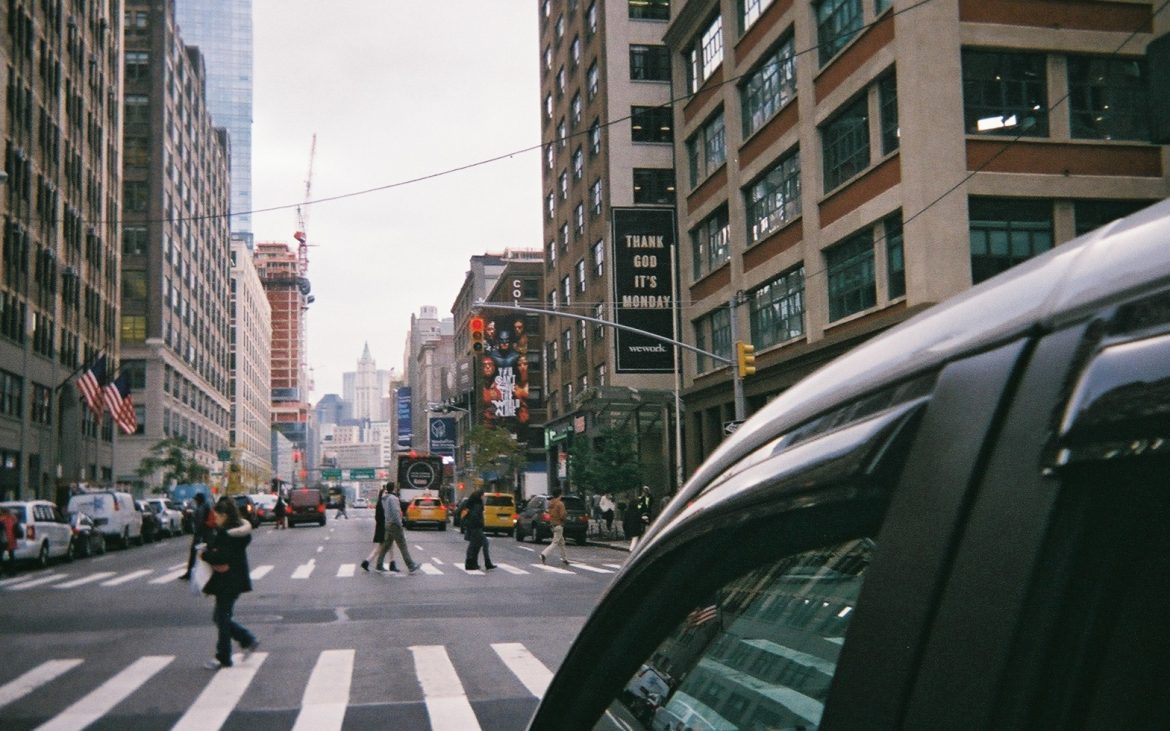 Right after that, I received a call saying that my Uber was waiting outside my office and that it would take me to the airport. On the way to Newark, I would receive more information. I answered the second call. They told me I would first fly to Albany, New York’s state capital, where I would pick up a package. I would spend the night there and leave at 5:00am to Los Angeles.

The flight to Tahiti departed a few hours later. “How many days do you want to spend in Tahiti?” I thought at least 30. I asked for four. “Ok, all booked. We will now start a WhatsApp group. Don’t you want to know what’s in the package?” I didn’t even care, going to Moana’s land and getting paid for it? I could be carrying a cocktail of drugs for all I cared.

But still, I asked. “Cables for a cruise. It’s leaving in two days.” The anxiety I didn’t know I had, faded away. Now I had to message them every time I boarded a plane, landed, got an Uber, and checked in a hotel. 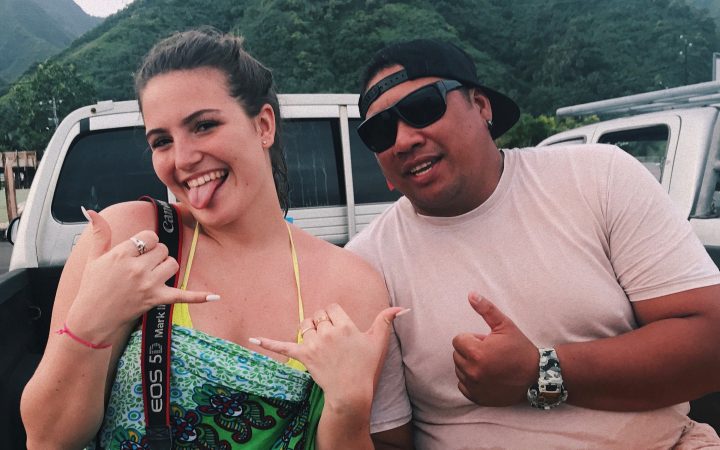 That was my first experience as an on-board courier. The easiest, most fun money I have ever earned. Everything went so smoothly, no questions asked at any of the borders. The package was picked up at the airport in Tahiti. I had four full days to enjoy the dreamy, honeymooner-filled island.

I later learned that it does not always go as smoothly as my first experience went.

Surprisingly for most, being an on-board courier is more common than it sounds. Hundreds of frequent flyers around the world board planes on a daily basis to deliver files, packages, and suitcases to countries they hadn’t even planned on going. Some of them make a living out of it. One trip a month pays my rent and allows me to travel to a new country.

I received a second message a few months later. “Argentina tomorrow?” It was from the company that had sent me to Tahiti a few months back. “Yep,” I replied. “Do you want to spend a day in Amsterdam or New York. Or both?” 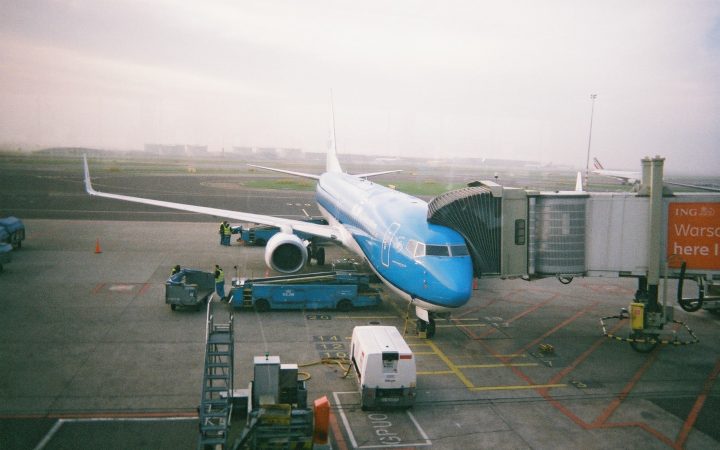 Boarding the plane to Washington

I left for Amsterdam that same day, spent a full day in the city and picked up the packages in the morning. There were five suitcases this time. I opened them to find boxes of white powder. Pineapple powder, it read. So, I was taking pineapple powder to Argentina, from Amsterdam.

My anxiety started to kick in, but I laughed it off. While I was waiting to check in, one of the ground flight attendants came around and asked the standard security questions to fly to the United States. “Is this your suitcase?” He said, barely looking at me. “No,” I had to answer. He looked up, clearly surprised at my answer, and asked it again. I explained I was an on-board courier, to which he called security, who asked me the same question. “You will have to come with us.” The door was locked behind me.

I was asked to sit in a corner of an empty room. There was just a table with some files, two chairs, and a security scanner. “Do you know what is in the suitcases?” “Pineapple powder” I replied “Do you know who packed it?” “No.” They looked at each other and I looked at the time. My flight was leaving soon. “Don’t worry about the time, you won’t be getting on that plane.”

I showed them all the legal documents the company sent me when accepting the delivery, claiming responsibility for the products and describing the content. They laughed at the signed paper declaring the products. They opened the suitcases to find the white, tropical-smelling powder on yellow boxes with Arab writing reading ‘Pineapple’. “Can we talk with whoever packed this?” I called the company. There was no answer.

I was alone on this. It was then when my mind started to rush with thoughts and words such as drugs, smuggle, prison.

With sleeve-long gloves, they began to rip off the suitcases, scan the products and test for explosives and possible drugs. I received a call. They let me go.

I was not allowed on my flight to New York because, I was told, “the check in had closed”. Not for the family behind me or the line of 20 people behind them, just for me. I had to get the next flight to Washington, and then fly to New York, where I would get my existing flight to Buenos Aires. Little did I know that the trouble hadn’t even started.

I boarded the plane, being selected ‘randomly’ twice, for inspections. I then realised that the boarding pass had a red circle around the gate number, while other passengers were circled in black. Still, I made it to Washington.

“Do you have anything to declare?” The security at customs asked me after I handed in my passport. My heart started to race. “Yes.” To my surprise, I was just handed an orange paper to fill and was given a locked case containing my passport. For some reason, that felt like a relief. “Welcome to America.”

Once I declared the content in my suitcases, I was allowed to board the next flight, without any complication. And the next. Then I was in Buenos Aires, Argentina. 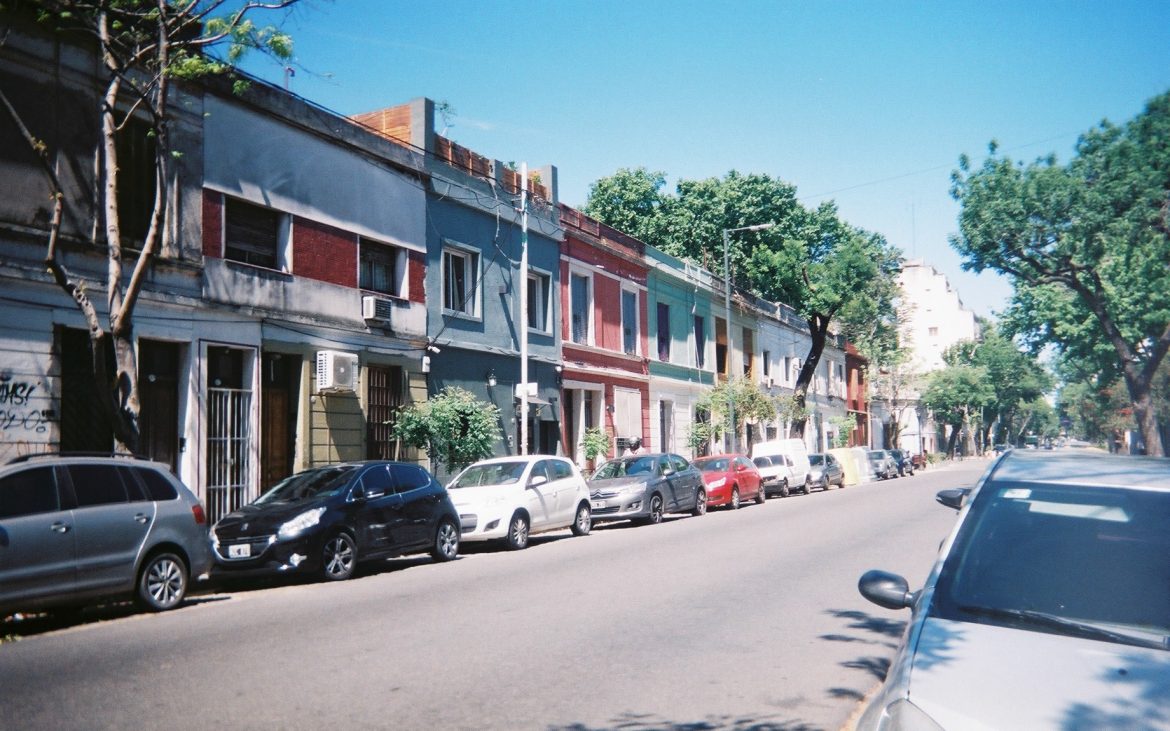 Our Airbnb was in the artistic area of Palermo in Buenos Aires. [Elsa Barbera]

The instructions were clear: once you land, go directly to your Airbnb, where you will meet all the other couriers. You will re-package the products and bring them to the customer the following morning. And so we did. 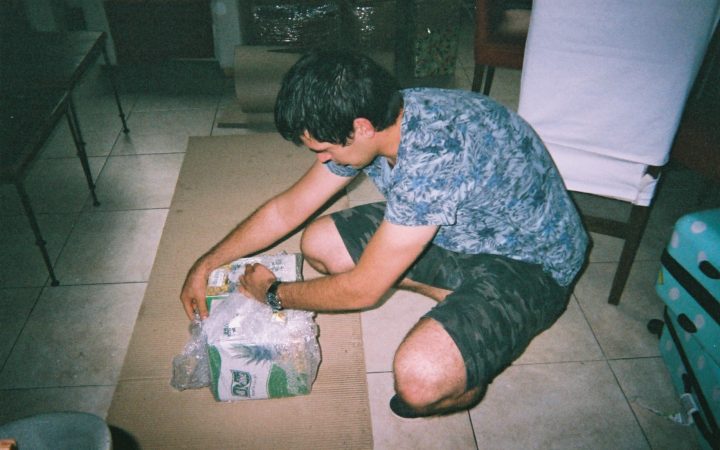 One of the couriers re-packaging the pineapple products, ready to deliver

The couriers had flown from all over the world, some from Mexico, others Brazil. Myself, from Amsterdam. There was all kind of pineapple products, brands, and origins: juice, powder, and individual sacks. We all laughed at how random the delivery was and joked about it being drugs or poison.

You might be asking, why would someone send tons of boxes of pineapple products from around the world to a country filled with the fruit? We asked the same question, over and over.

When discussing it with one of the people managing the ‘pineapple delivery’, she told us how, for some companies, investing ten to fifty thousand dollars on on-board couriers is better than having to go through the long lists of declarations and product information — and extra fees — of sending it as cargo. 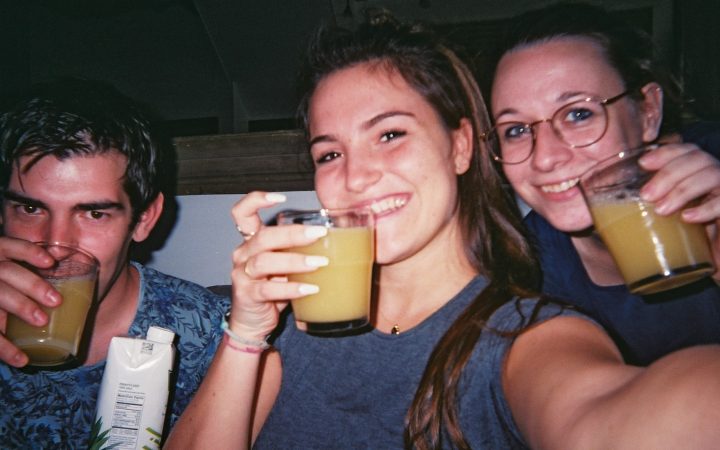 Trying one of the damaged pineapple cartons, testing if it was, actually, pineapple

It was a similar situation when they flew me to Tahiti. The ship pieces were required the next day, and no delivery service could provide that to such secluded island. Investing in a flight or two was much more affordable than any of the other options.

The company I was working with claims to provide the fastest delivery options – making it to any Asian country from Europe or the United States in less than 24 hours; up to 36 to South America, the Pacific islands or Southern Africa.

Talking to the other couriers whom I was sharing Airbnb with, I heard many other stories and situations. From delivering mysterious, encrypted USBs from the United States to Russia, to jewellery from Switzerland to Ethiopia.

Myself and another courier were semi-rookies in the job, while the rest made a living out of this and flew to between five and seven different destinations a month, with some months cashing in more than £5,000, and others none. It is an unreliable way of making a living, so many combine it with freelancing or part-time jobs. I felt it was the perfect student job. 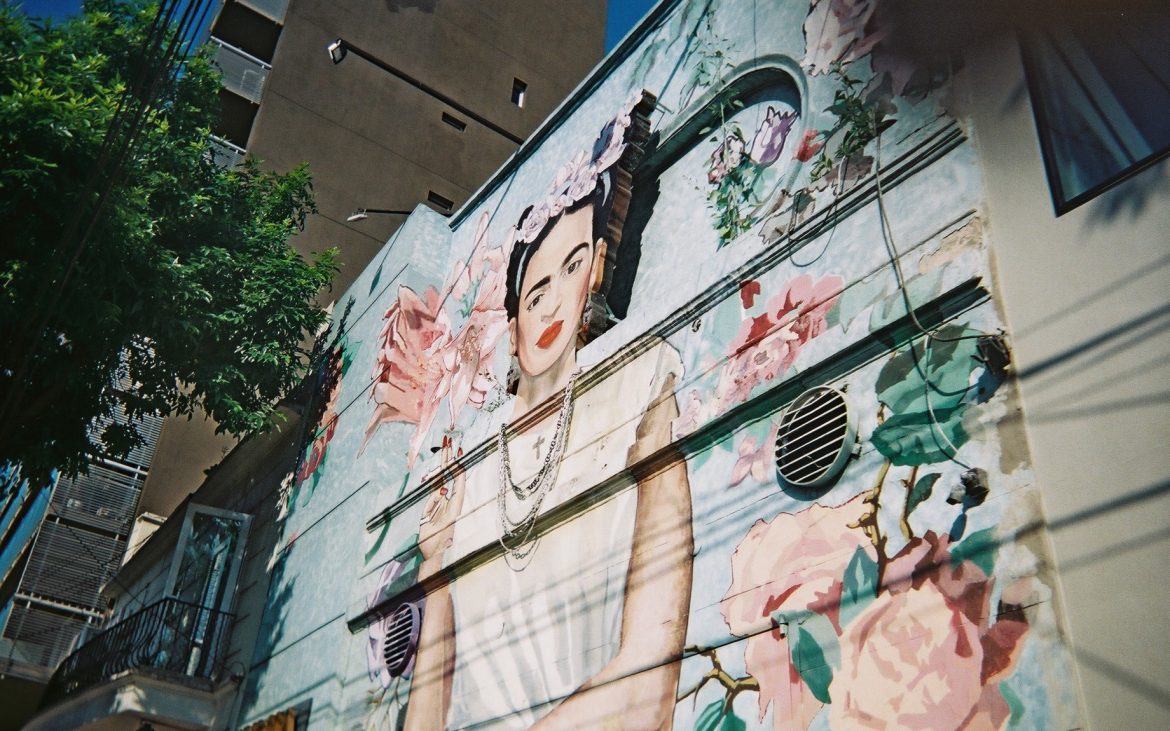  After a few days exploring Argentina’s capital, it was time to go home. This time, stress-free.

The universe laughed at me. Or, at least, the boarding patrol in New York did. ”Your passport doesn’t seem to work, it must be wet or wrinkled. Please come with me to try a different computer.”

I followed him three floors down, through a staff-only access and doors with big, bold letters reading PRIVATE. I still believed my passport was wet or wrinkled. Until I looked up to see the room we were in: white walls, a table, two chairs and a big mirror. I was being interrogated. Two men came in with my suitcases. “Hi, Elsa.”

My belongings were spread all over the table, being touched, opened and turned one by one. “What was your purpose in Argentina?” I explained and one of them sighed, while the other said “Sounds fun! Do you make money out of it?” I still didn’t know if he was being sarcastic. I answered and gave them some more information, as I would to a friend, trying to keep me calm.

I didn’t mind the questions, as I didn’t have anything to hide. I began to worry when one of them asked about my Instagram following, adding without changing his tone of voice, “Is it because you deal drugs?” I was lost in thoughts, how did they find my social media accounts? And how could he keep a straight face asking that question? I laughed and said no.

I was asked to unlock my phone. In front of me, they went through all my WhatsApp conversations. They wrote down the names and asked me to provide surnames and location. I must admit, when they opened conversations other than my family and friends, I was noticeably and reasonably uncomfortable.

I thought it couldn’t get worse until they opened my pictures. And then, my deleted photos album. My soul left my body, there was not a single cell in my body comfortable with the situation. “Sorry about all the selfies,” I laughed, trying to break the silent, get-me-out-of-here mood.

One of the men left and I was left with the ‘good cop’, who asked me a few more questions about my personal life, made me write down, again, the 10 people I’m currently talking to, people I work with and family members. Then he wished me good luck with my studies and, after playing around on his computer, promised me I wouldn’t be stopped anymore.

I felt exhausted. I thought it must have been because of how slow time goes by when you’re uncomfortable. When unlocking my phone, I realised I had actually been interrogated for over six hours.

A week later, when I was back in London, I received a new message: “Can you fly to Brazil tonight?”

“Welcome to São Paulo,” the pilot said while the passengers clapped with excitement and relief.

EDITORIAL NOTE:
May 15, 2018 – This story was edited to remove the name of the company at their request.

All images by Elsa Barbera