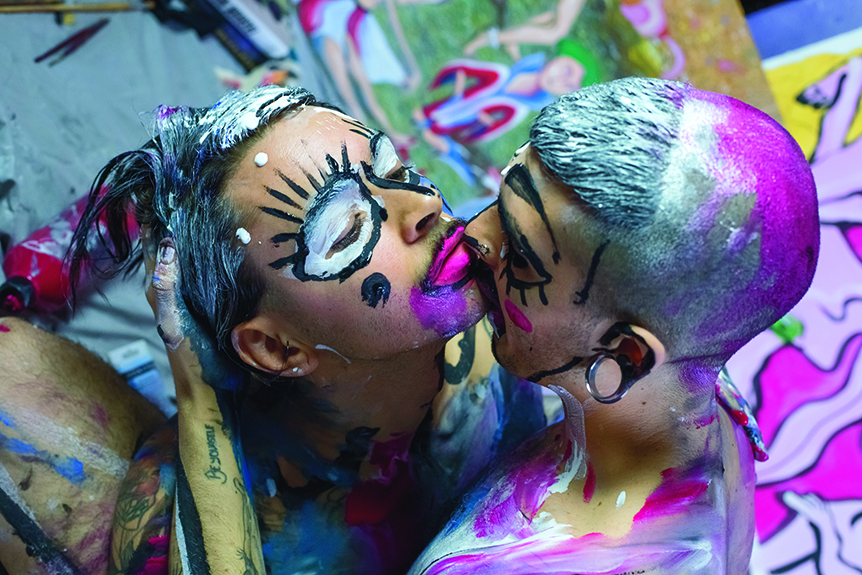 Words and images by Eleni Parousi

K-HOLE ANKKH is an artistic duo from Italy. The twin soul artists use painting and performance to create and promote a world free of binaries and gender expectations. Based in Rome, the pair often visits London to spread their mission of r-evolution. If you get lucky, you can catch them in queer dance nights like Papa Loko, Kaos and Coven or the legendary and long standing underground arts night of Italy, Decadence.

I first saw them at the regular techno night KAOS in Electrowerks. Washed by a blue light, they were locked in a cage, painting a mural all night. Dressed in carefully hand-constructed garments, they moved graciously, in perfect harmony with each other.

Curious about their art practice and relationship to one another, I asked if I could visit to photograph them and find out what were they all about.

Ektor and Kristofer share a passion for art and fashion outside the traditional constrains of the gallery and the catwalk. They perform in club nights, abandoned buildings, diy venues and queer nights. Together they built a manifesto which defines everything they do, in art and in life. They are young, in-love and utterly utopian. They believe in a world of no gender and pure freedom.

A new kind of anarchy, colourful and sexy.

I went to photograph K-HOLE ANKKH on a rainy October day. I had previously asked if I can observe them while they paint, to try to capture something of their artistic and romantic relationship. I arrived at their house in Stoke Newington and was welcomed by the half naked couple and a hot cup of Italian coffee. ‘We’re running late’, they said, ‘can you wait in the kitchen?’.

My curiosity grew even bigger, what had they planned for me? Twenty minutes later I stepped into their room, which had been arranged for the day. The couple’s recent paintings rested on the walls all around, a white cloth covered the floor, tubes of paint scattered all over it.

The pair stood in the middle, dressed in nothing but jockstraps and white tulles, like two cupids in-love, waiting, paintbrushes in hand. ‘We are ready when you are’ they declared; not asking any questions, I started shooting.

What followed was a strange dance between three people: the performing pair and me. 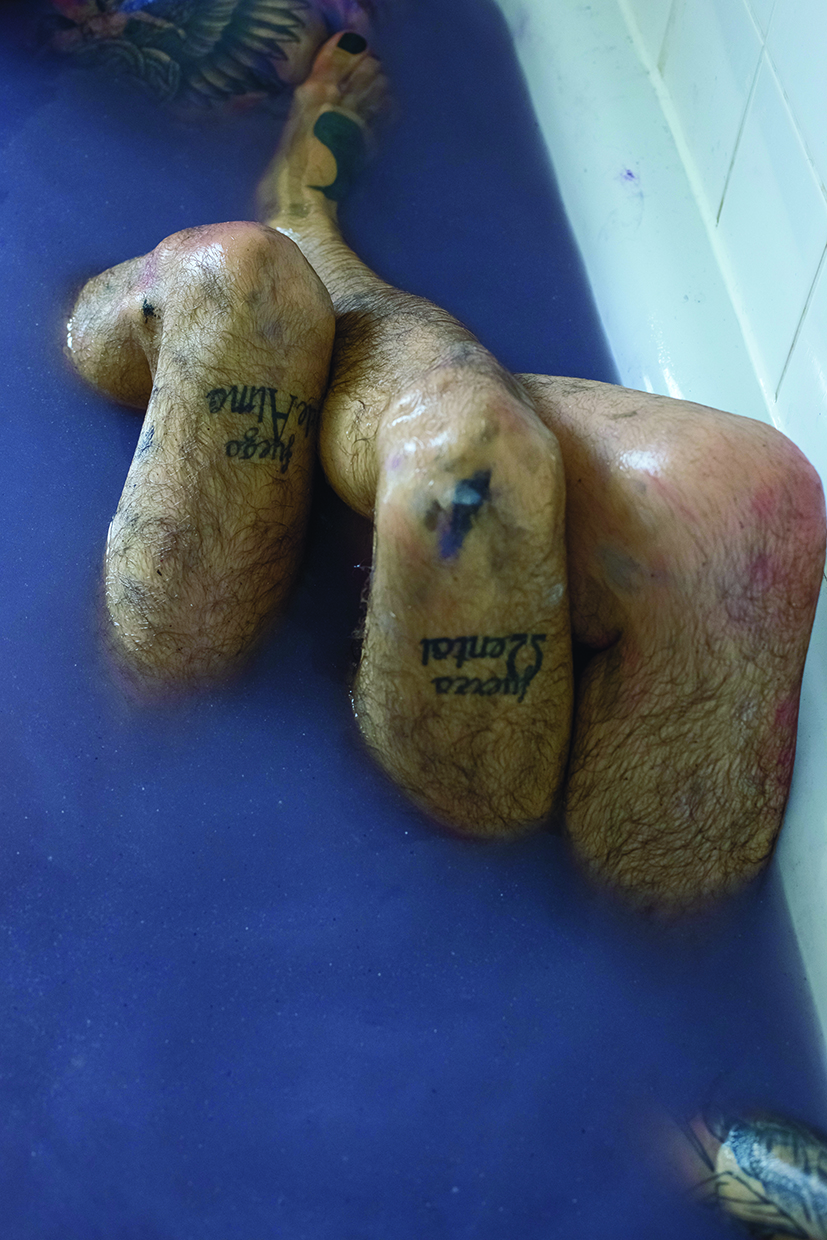 In the bath [Image: Eleni Parousi]

Climbing on the furniture around the room, I observed them painting each other’s bodies, expressing their androgyny with their brushes and paint. As I moved, so they moved with me, following the camera with their bodies. The more they painted each another, the more they became absorbed by one another, until they forgot I was there. Their bodies now perfectly painted and intertwined, they started pouring paint over themselves and smudging it across their chess, until they became one – one painting, one entity, one body.

The performance lasted about an hour. ‘Is this how you normally work?’, I asked. There’s no formula, they proclaimed, we do what feels right’. ‘Is there anything you had in mind?’, they asked. I took a minute to think. The performance had swept me away. Their ability to communicate their message through their movement and through their interaction with each other was more than I had envisioned.

They live and breath art, but I had the feeling that the force behind it all is their deep personal connection, their passionate young love. ‘How are you planning on cleaning all this paint?’, I asked. ‘We normally have baths together’, they said, ‘the tub is small, but we love washing one another’.