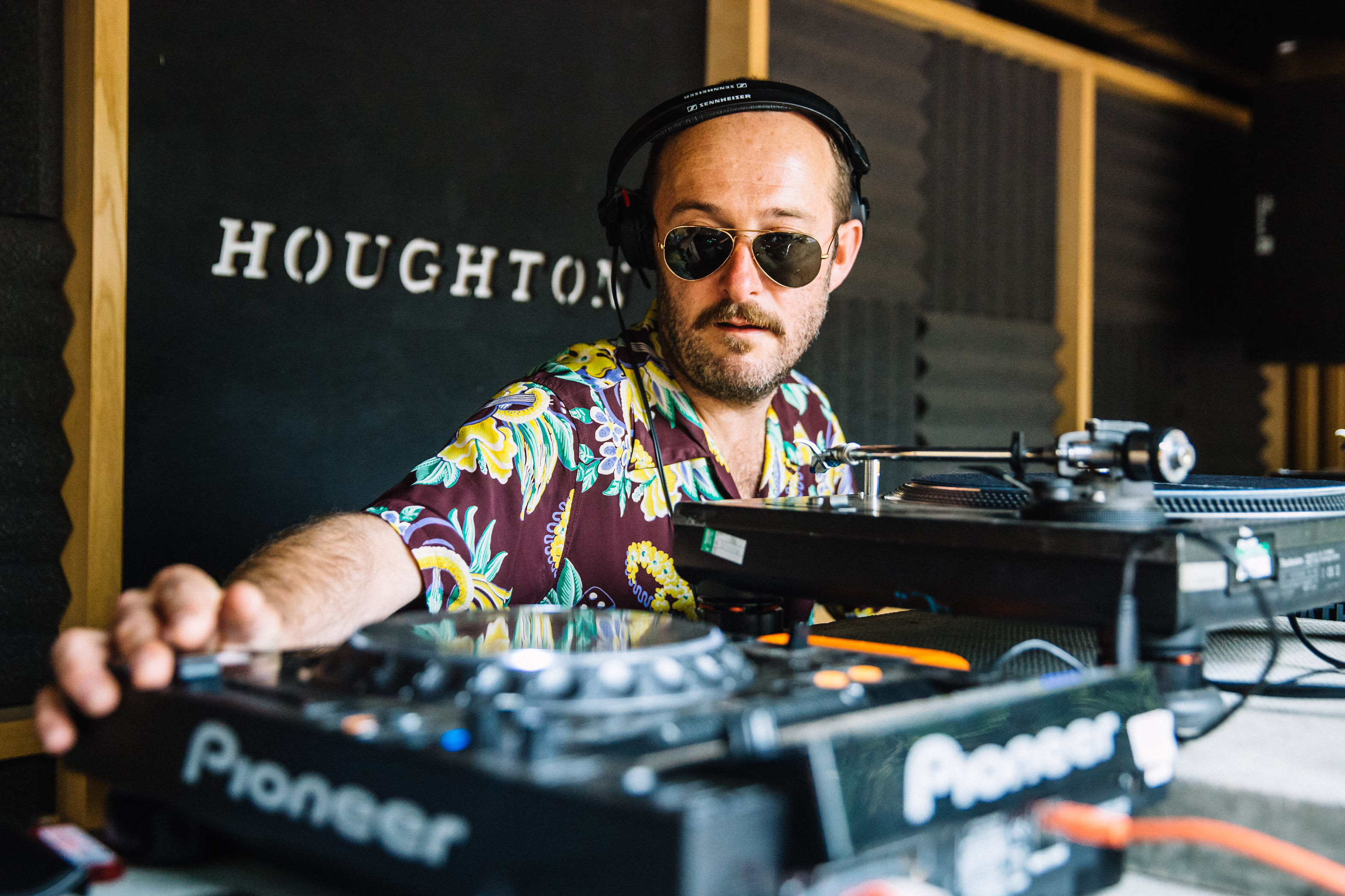 A Show of Heads Inside and Out is an unassuming book from the outside; other than the word Houghton stamped cleanly across the cover with 2017 etched in black below, its clean muted brown exterior serves no clues as to what lies within.

This air of mystery beckons you inside, where you are greeted with bold lines and geometric shapes that depict the sound and appearance of various musicians. The illustrations vary dramatically as you flick through its 88 pages, from the aggressive red scribbling of Seth Troxler to the curvaceous fine lines that represent Ricardo Villalobos and a more playful, blocked out depiction of Hammer. 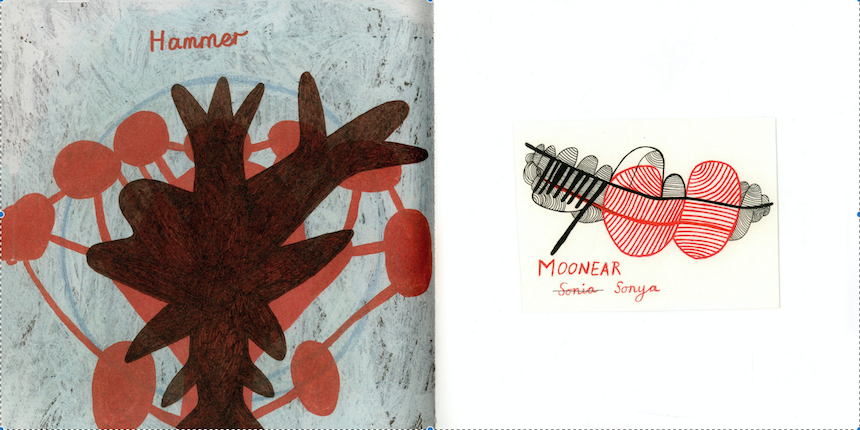 This is Craig Richards’ new illustration book, a celebration of Houghton Festival’s impeccable first year, which the esteemed DJ and Fabric resident of seventeen years created in collaboration with Gottwood Festival.

Richards studied at St. Martins School of Art (now Central St Martins) between 1987 and 1990, where he gained a bachelors degree in graphic design before going on to the Royal College of Art to complete his masters.

On the switch from visual art to music for his professional career, Richards explained that he started playing records seriously in the eighties whilst studying at St Martin’s: “In those days of inspiration electronic music was still defining itself,” he says. “I became obsessed with its development and have been at the forefront of its growth for over twenty-five years.” 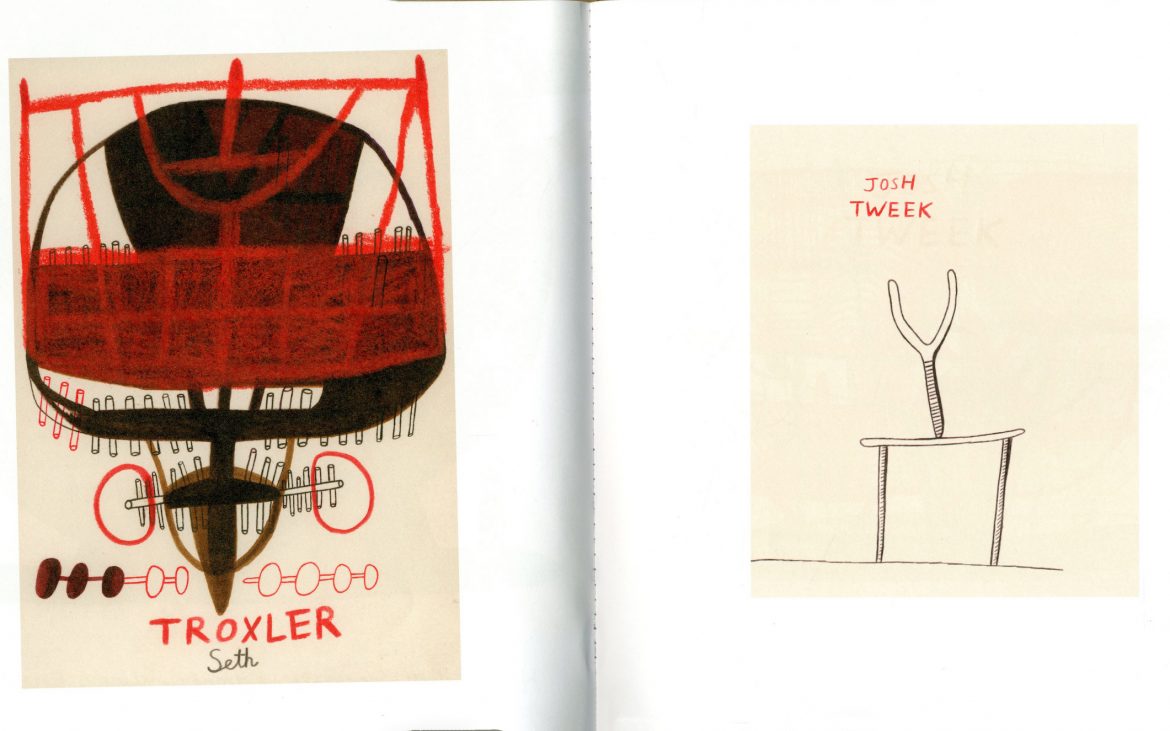 “Somehow, Craig Richards had managed to create a tiny woodland utopia in the Norfolk countryside and an entire world that felt separate from our own.”

Alongside the outstanding line-up of music across the weekend, the festival seamlessly converges music and art as one with its sculpture programme. The Houghton Estate will host a Damien Hirst exhibition this summer, so it is expected that these will be incorporated into this year’s event alongside the work of Turner Prize winner, Richard Long.

On combining music and visual art, Richards explains that as his time as a DJ, he has been given the opportunity to travel the world and play some of the best events and festivals in existence. “It has always been my dream to fuse art and music and whilst their union appears to be obvious,” he says, “it is very difficult to enable their coexistence.”

Alongside the Gottwood team, Richards created a four-day cosmic utopia and realised his dream of building a home for art and music to exist as one. The festival was surreal from beginning to end.

Even the approach to Houghton felt otherworldly. As our car crept up the grand tree-lined passage leading towards the Grade I listed buildings of Houghton Hall, my friends and I questioned whether we had come to the right place. It looked as though we were about to attend a luxury spa retreat, not a common weekend-long music festival. 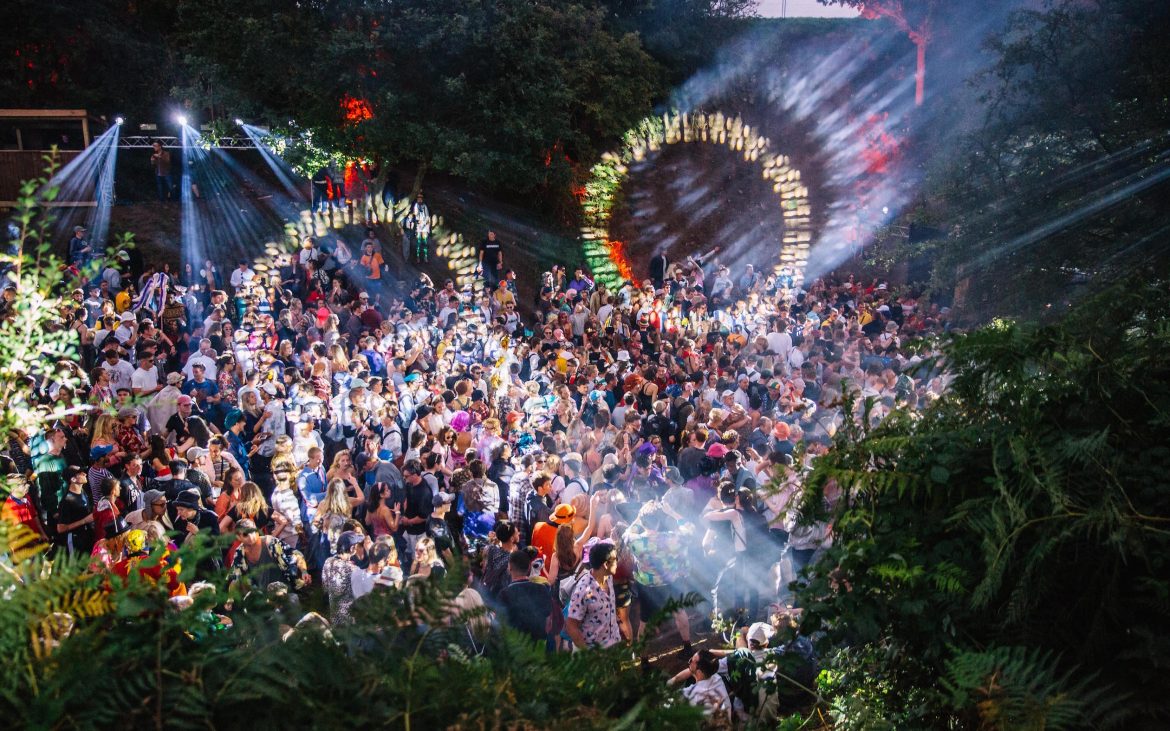 Once we had set up our camp, it became abundantly clear that this was not going to be your average weekend. The sun was pulsating down on us and electricity was flowing through our campsite as everyone was excitedly discussing the world-class music that we had ahead of us. Curated by Richards, Houghton had the most tantalising of lineups, especially considering it was the inaugural year of the festival.

The weekend showcased some of electronic music’s best artists, from Richards himself completing a staggering twenty hours of deck time across the weekend, to Ben UFO, Joy Orbison, Floating Points and Seth Troxler. 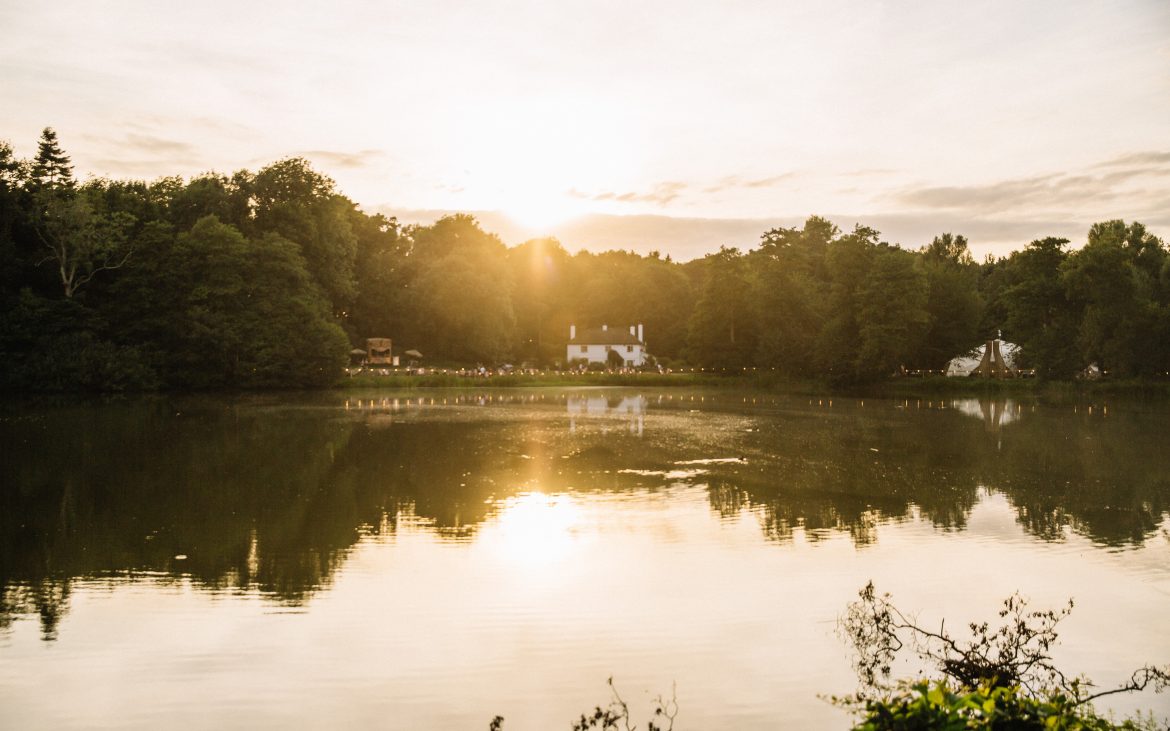 Better still, the festival had managed to secure a 24-hour music licence, which meant that the party was non-stop from 9:00am on Friday until the sun began to filter through the trees on Monday morning.

The weekend closed with Richards completing a mammoth eight hour back-to-back set with Ricardo Villalobos at the Pavillion stage, a woodland utopia tucked away from the rest of the festival behind an expansive lake. Even to get from stage to stage, ambling along the glimmering shore of the lake through the forest with the soundtrack of thudding industrial beats echoing from the Warehouse stage, was an adventure in its self. 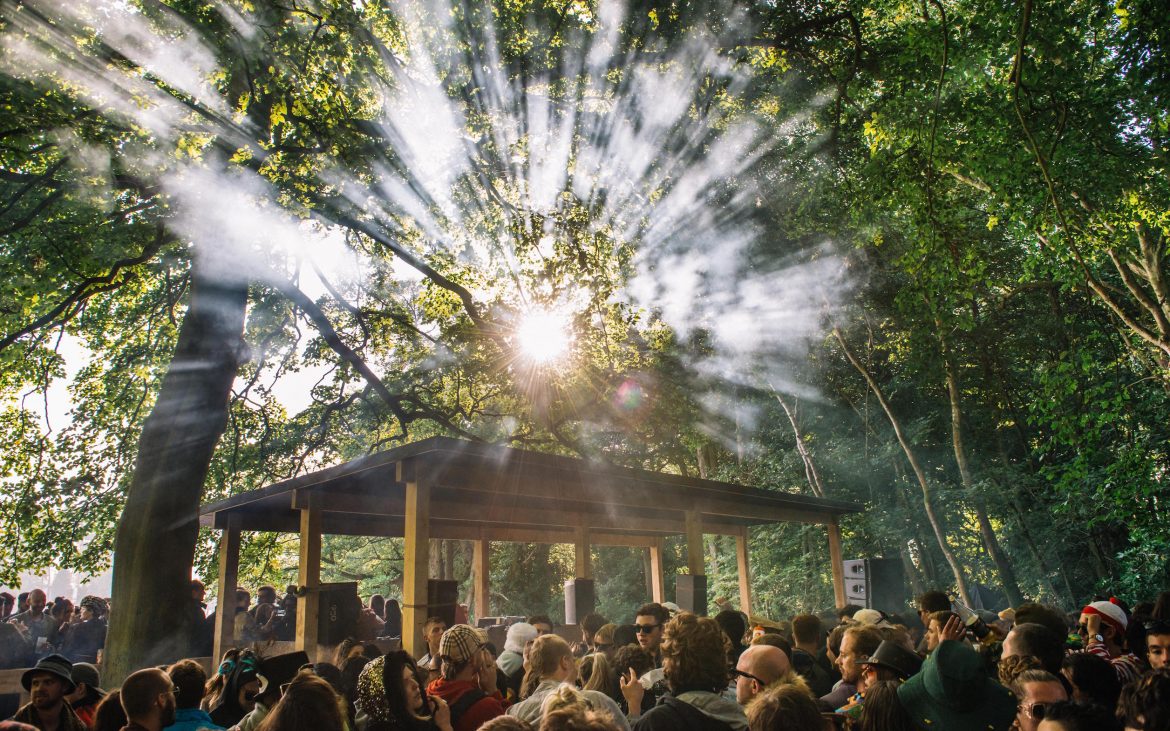 High-quality sound is paramount at any music festival. Houghton’s remote location and stage set up meant that the sound systems weren’t in competition with each other. The Quarry stage, a cavernous pit which commanded the festival’s far corner, allowed revellers to be drowned in the jazzy sound of Mr Scruff in the afternoon and be completely engrossed in the light show that accompanied Hunee’s rhythmic house throughout the night.

However, Giant’s Steps, the festival’s stage and analogue sound collaboration with Hackney venue, Brilliant Corners, saw what was arguably the most refined sound of the weekend. It was one of the festival’s indoor stages set inside a wooden yurt, which you had to crouch to enter through a tiny door. Welcomed in by a mass of plants and, more often, a large crowd, it was an intimate escape from the madness of some of the bigger stages and one of the most magical spots on the whole site.

The weekend flew past within the blink of an eye. As we left, sunburnt from the long August days and slightly worse for wear, it was difficult to recognise whether or not the past few days were real. Somehow, Craig Richards had managed to create a tiny woodland utopia in the Norfolk countryside and an entire world that felt separate from our own.

Unsurprisingly, the festival has been celebrated unanimously by the press. “Both music-related and broadsheet publications claimed it to be one of the best festivals of its kind that this country had ever seen,” Richards says with pride.

On how Houghton will progress, Richards explains that the plan is to bring Houghton to the forefront of the UK Festival scene. He concludes by saying that “next year it is our intention to make Houghton one of the most important and forward-thinking art and music festivals in the world.”

I have no doubt that his vision will come true.