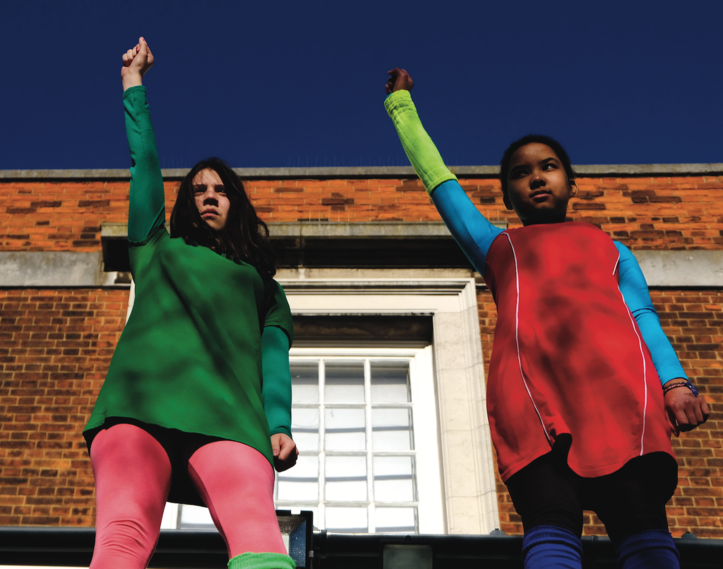 To coincide with the 100th Anniversary of the Representation of the People Act 1918 , which for the first time extended the vote to women over 30, Rich Mix arts space will be exhibiting work produced by Parliament Girls School in collaboration with Scarabeus Aerial Theatre, The Women’s Library at the LSE and the Education Department at the Houses of Parliament.

The exhibition, curated by Sharna Jackson will explore women’s activism over the last 100 years, and is the final piece in a series of workshops, debates, interactive masterclasses and performance involving 40 young women from Year 9 at the school. 100 years marks an important time to question what has happened and what has changed.

Daniela Essart, Art Director of Scarabeus, spearheaded this collaboration having previously worked with the Parliament Hill School and The Woman’s Library on the Dark side of the Moon project about the hidden history of women astronauts.

Daniela’s focus on astronauts was inspired by the lack of awareness of women who have been part of space programmes, as well as their under representation in the programmes. When I learned of this prior partnership it reminded me of Theodore Melfi’s 2016 film ‘Hidden Figures’ which told the unknown story of three African American mathematicians in the Nasa space programme, Katherine Globa, Mary Jackson and Dorothy Vaughan.

Not only do such initiatives reveal the gap in the populous knowledge about women’s achievements, but also presents an opportunity for art to play a role in the understanding and participation in activism and historical discussions.

‘We are the granddaughters of the witches you could not burn’ is the name given to the collaboration with Scarabeus Ariel Theatre, which emphasises bringing live performance to unique places.

This promenade performance at Parliament Hill School included, amongst other elements, a suffragette Jiu Jitsu training session, a women’s prison scene and historical and contemporary suffragettes in Parliament demanding equal rights. The exhibition includes photography of women’s activism and these performances.

At school I don’t recall being taught about feminism, but rather it received a minor mention in the context of the 60s & 70s revolutionary movements. 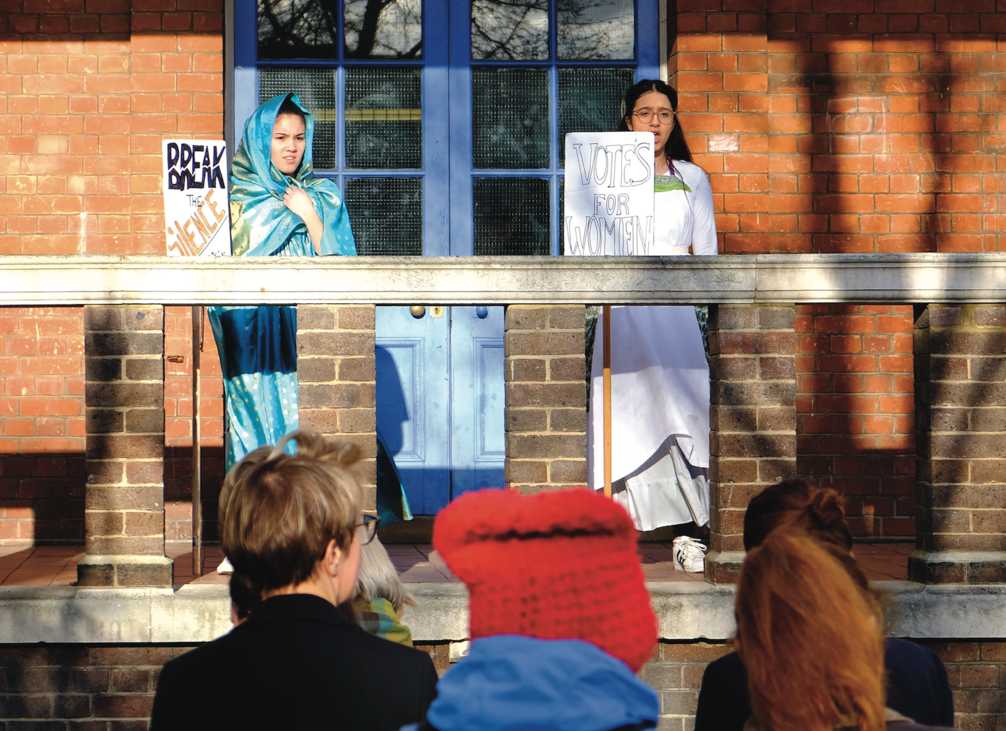 These feminist movements were poetically sprinkled between with the wider context of Vietnam, the sexual revolution and flower power.  The issue here, was feminism was never explored in and of itself, but rather a side point to a wider narrative. This lack of context and framing in history can have wider consequences as to how we, read and understand history, and its relevance to our own lives.

It was Franz Fanons ‘Algeria Unveiled’ during my studies in politics that first opened my eyes to a complex and ignored history of women’s activism and the key role of woman in the independence movement against French occupation.

I was astounded at the forgotten histories of women in resistance, and how women’s resistance took on valid and creative forms which were key to developments in the 20th century, though are often overlooked in the historical context.

This wasn’t women fighting for women’s rights only, but for the wider political movements of the day. From cacerolazos protests of Latin America, which have moved further afield, women have and continue to protest against economic and political injustices in ways which have often fallen outside of the main agenda.

With the growing awareness of intersectionality within feminism, there is a need to better understand the range of histories and experiences of different types of women. This more complete and democratic understanding of race, class, gender and other protected characteristics can relate to the figures of the past who have been forgotten in the narrative of the woman’s movements.

This collaboration, supported by the Heritage Lottery Fund, allows a space to explore a range of narratives by highlighting not only the names of those well-known suffragettes such as Emmeline Pankurst but others who have carried the torch for the movement.

The creative thinking of art practitioners such as Daniela Essart who are finding ways in which young people can engage with complex issues through art could present a shift in how schools engage with art, activism and forgotten histories.

Photography has played an important role in documenting civil unrest and the operations of the state throughout history. The treatment of the suffragettes for example, was documented in newspapers in Britain, and some of the tactics used by police provided a greater sympathy of the cause, or at least, with such photographic documentation of brutality, a critical eye was levelled at the state.

It is no surprise therefore that photography takes centre stage at this exhibition, historical and contemporary photography of historical and contemporary activism is included.  In addition to this, images taken by Jonathan Knightley  and the video documentary from Chloe Plumb of the performance and the initiatives that were core to this collaboration, will be displayed.

The question remains, what next ? potentially more collaborations? and a space for artists to engage with young people in this manner and help create thoughtful discussions, around complex issues.

You can catch the exhibition, ‘We are the granddaughters of the witches you could not burn’ at the Rich Mix Theatre from Wednesday 6th June – 28th June.

For more information on the exhibition please visit

The fight for women’s equality, now and then documentary video https://vimeo.com/263330391