Autism and mental health: A difference, not a deficit

How do you start your day? A quick rush out the door, toast in hand, with your only real worry being how late you could end up being if the 9:39 train doesn’t arrive.

Now imagine doing that routine and struggling to even step out of the door. You reach the station and it’s crowded – you instantly panic and feel anxious. Trying to buy a ticket you flub your speech and struggle to make eye contact. Conscious to how others around you may be reacting, you dwell on the moment for hours, maybe even days.

These behavioural aspects correlate with a diagnosis of autism, and when paired with depression, it only becomes amplified and sometimes even scarier.

I was four when, following several follow ups and tests that I was diagnosed with Asperger Syndrome and since then it has impacted my life consistently, for better and for worse. You will never hear me say that I wished I wasn’t autistic, though I would like it if some aspects of life were easier and that there were more lifelines in place for young adults currently feeling anxiety and depression.

I was diagnosed with depression in 2014, though it had started festering long before then and when we had Mental Health Awareness day recently it was amazing how many turned in their support and shared their personal experiences. However, I feel that the demographic of young adults with mental health issues who are also autistic wasn’t represented enough.

A recent study conducted by Dheeraj Rai of the University of Bristol found that depression affects 20% of young adults with Autism. When I discussed the study with Rebecca Sterry, the senior communications manager for Autistica, they told me how their own research had shown that 79% of autistic adults have had a mental health problem.

It was a stark contrast as their study showed that the number was almost four times higher, and Sterry’s explanation gave some clear reasons why: “Anxiety and depression are extremely common and sadly we now know that suicide rates in autistic people are nine times higher than in the general population. Much more needs to be done to understand and treat mental health problems in autistic people.” I couldn’t say that this surprised me, as I had a history of self-harm and suicidal thoughts that almost led to taking my own life.

At the time I had become disillusioned and detached from the world around me, but not in a way that people would really have guessed – I was pretty adept at hiding it. It was only when a teacher noticed the self-harm that my parents were made aware. I ended up being taken to a doctor and diagnosed with depression.

Two years of anti-depressants later and I was in a better place, but only because my environment was healthier and I was comfortable with the friends I had made. I also stopped taking the medication, as I no longer needed it – I learnt how to control and manage my depression.

However, even now several years later, I think on how different things could have been if that teacher hadn’t noticed, if I never conveyed my depression and anxiety to those around me. Based on the statistics above, those in similar situations to me felt that they didn’t have a lifeline and that suicide was the only option, and I almost ended up traversing the same path.

Because of this I wanted to know more on how Autistica assists and supports those with Autism, and what sort of help they have in place, should an autistic young adult express signs of distress correlating with depression and other mental health issues.

“As a research charity we work closely with service charities who support autistic people. We want all services and support that the NHS, charities or independent professionals provide to be based on the latest evidence, and to be as personalised to the person as possible,” Sterry explained. The idea of personalisation is a key one, as forming a bond of trust is vital to ensure that an autistic person doesn’t feel alone or isolated.

In 2017, Autistica ran a campaign called ‘Not One Size’ – Sterry explained that the idea behind the campaign was to “highlight the need for autism-specific services, because what works for the general population, doesn’t necessarily work for autistic people.”

This involved people calling upon their MPs to debate the topic of mental health and suicide in the autistic community, which they did on November 30. There was a unanimous decision from all sides calling for the Government and the NHS to “work closely with the autism community to develop effective and research-based mental health pathways.”

The Minister for Care and Mental Health and now also Government Minister for Suicide Prevention, Jackie Doyle-Price, said at the time that the government would “ensure progress is made,” but she admitted that “we still need to do much more to support people with autism, and particularly to ensure that they can access appropriate mental health services.”

Doyle-Princes’ role as Government Minister for Suicide Prevention in Parliament was only confirmed on October 10, 2018, a positive sign that the research by charities such as Autistica is making a difference where it matters most. As of May 2018, Health Minister Lord O’Shaughnessy had confirmed that a review of these pathways is going ahead and would look at mental health support for autistic children and adults.

The campaign is on-going, and in September for World Suicide Prevention Day, details were shared stating that Autistica is, “funding researchers to work with people who have lost autistic loved ones to suicide to explore the circumstances around those deaths.”

In a world built on communication, it’s important to remember that one-in-four autistic adults speak few or no words and that the diagnosis of mental health problems in this group is particularly difficult.

Autistica is carrying out research at the University of Birmingham to develop a diagnostic tool so that healthcare professionals can understand a person’s behaviour and understand whether it is a sign of that person being anxious or depressed. They are also  working with the Samaritans to help them develop a more autism-friendly alternative to calling their helpline.

I thought this was a brilliant idea, as my experiences with these kinds of phone calls tended to be rather negative – it can be very anxiety-inducing for someone with autism and mental health issues to talk with someone over the phone about their problems.

“Many find going to the doctor difficult, they may struggle to express how they are feeling, or may not be able to self-identify their feelings as mental health related. We are looking at ways to empower autistic people to understand and self-manage their own mental health problems – we’ve developed an app which aims to help autistic people manage anxiety – Molehill Mountain.” 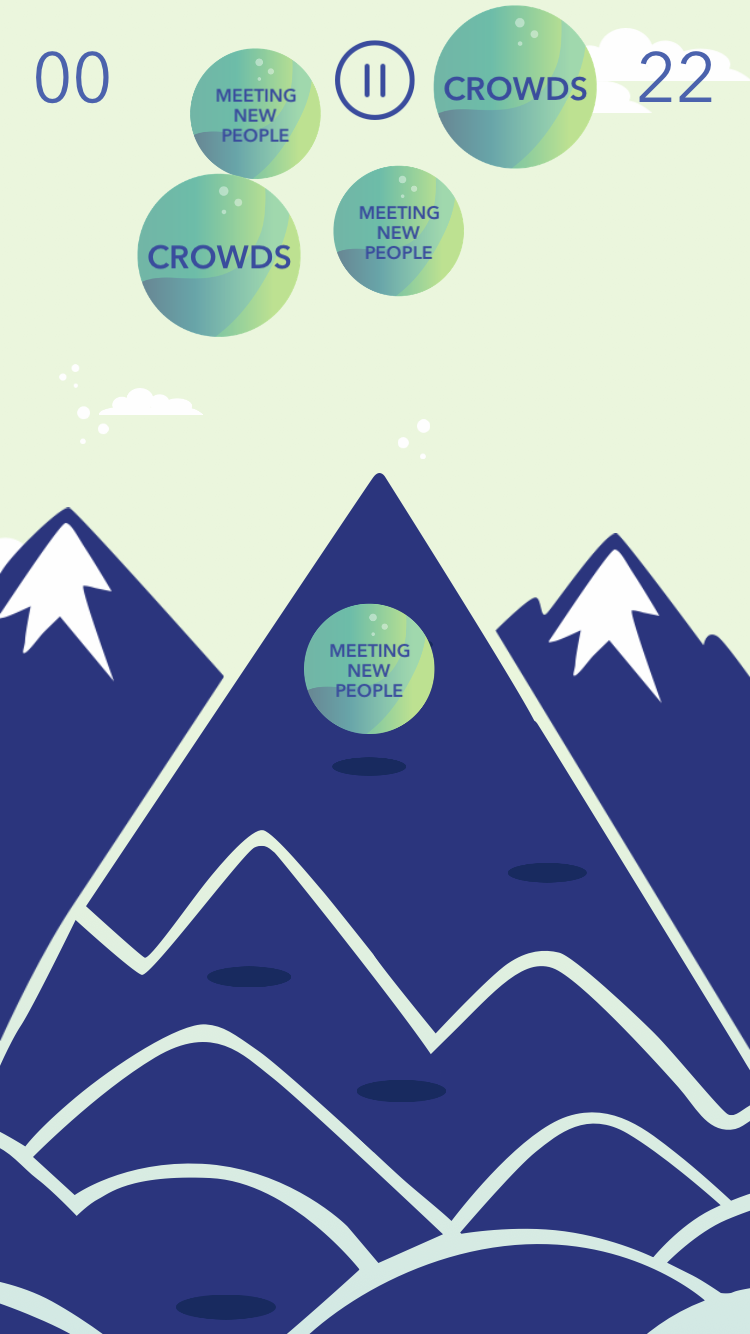 I decided to download and try out the app, using it for my daily commute from Hertfordshire to Elephant and Castle for three days. It offers users a chance to catalogue aspects of everyday life that cause anxiety and write them into bubbles, which can be popped in an interactive game designed to help reflect and capture worries.

I had a difficult time dealing with a particularly crowded Victoria Line, so I entered “Crowds” into the bubble and spent 30 seconds popping them and it calmed me down and along with my pre-existing coping mechanism, music, made me feel less anxious.

Autistica’s website features a useful section titled the “Media communications Guide” which covers a plethora of dos and don’ts regarding the correct terminology and representing autism properly and sensitively as a journalist.

“The language around autism is always evolving and it’s important to be sensitive to a person’s personal preferences. It is good to talk about autism as a neurological difference, not a deficit. Yes, alongside autism there can be many challenges, but autism brings a different way of thinking that we can all benefit from,” Sterry told me.

“We would never talk about autism being mild or severe as it’s not a helpful distinction. Someone may be very able intellectually but may struggle with day to day tasks that mean they require a lot of support. Again, with both language and support, it all comes down to understanding a person’s individual needs and preferences,” Sterry added.

The core theme of identifying individuality is expressed once again here, and this is exactly what more news reporters and corporations need to make the public aware of, the individual needs of those with mental health problems who are also autistic.

We regularly get exposed to the various issues that people with depression go through, but the focus also needs to continue to go deeper, to a demographic who are being fundamentally under-looked and deserve a voice, support, and awareness from the public. I know I wish there was such an awareness when I was growing up, so I want young adults to be provided the opportunity today.

Now imagine doing that routine and struggling to even step out of the door. You reach the station and it’s crowded – you instantly panic and feel anxious. Luckily, you have your phone on hand and login to Molehill Mountain. After 30 seconds or so you’ve calmed down and feel less anxious, and the waves of worry that wash over you feel less intense.

Such a simple but brilliant idea is made possible by research charities such as Autistica, and if you want to get updates on the latest research and opportunities to take part in studies, join Autistica’s research network

Find out more at: autistica.org.uk/take-part.