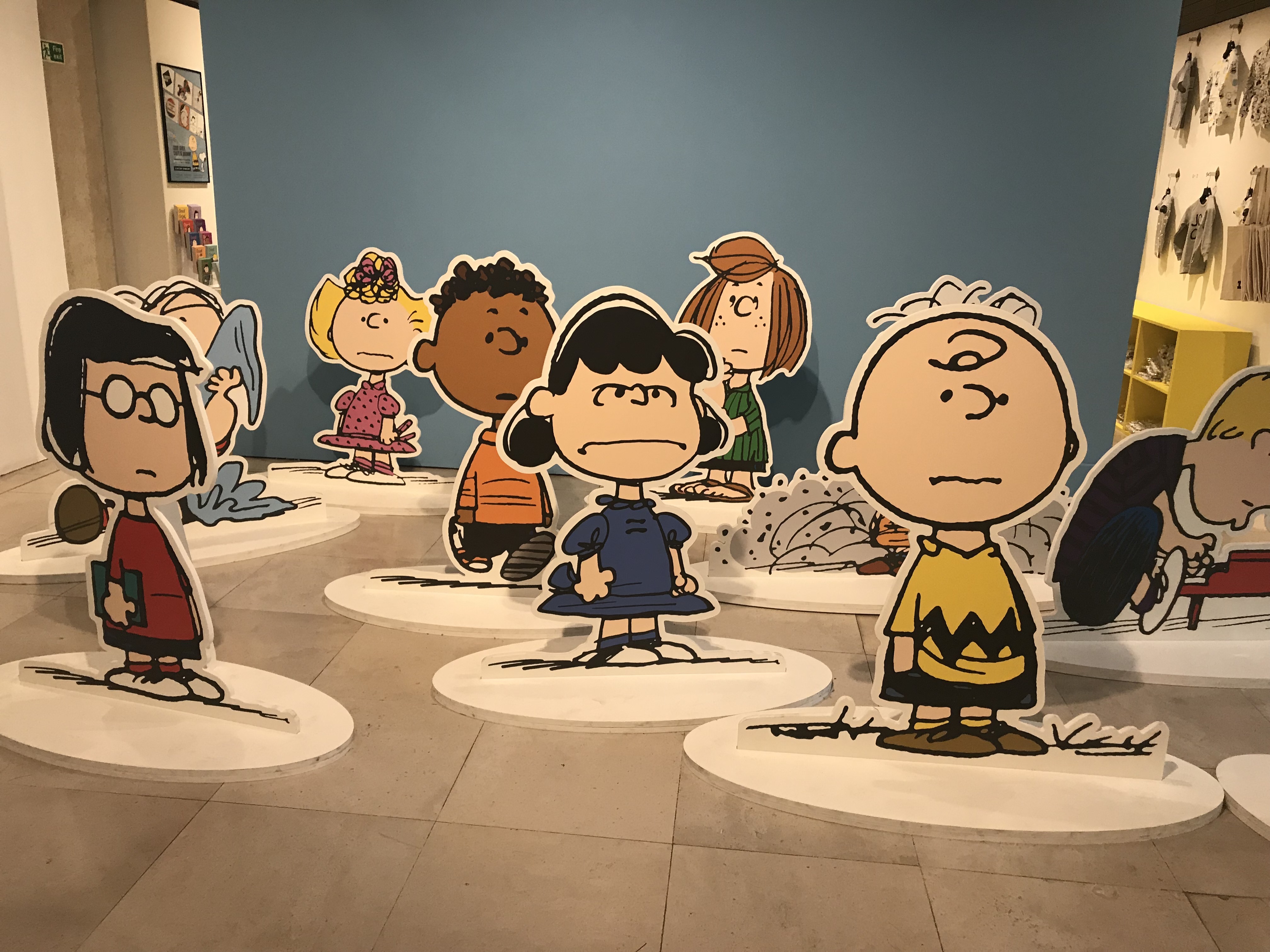 “Let me guess? You’re here for the Good Grief, Charlie Brown exhibition, right?” The lady at the front door of the South Wing of Somerset House, either noticed my huge smile or my oversized Snoopy sweatshirt that yelled, “you must be a huge fan of Snoopy!”

Finally making it to the lower floor of the South Wing, I noticed most of the whole Peanuts gang.

Peanuts is an popular newspaper comic strip that ran from 1950, created by the American cartoonist Charles M. Schulz, who produced 17,897 strips until he passed away in February 2000.

Charlie Brown, Peppermint Patty, Lucy Van Pelt, to name a few, were portrayed on cardboard cut-outs standing some five feet tall at the entrance to the exhibition.

Once inside, a Somerset House host escorted us upstairs to an artist talk which was led by Russ Gator, co-founder of the clothing brand TSPTR and a Peanuts devotee.

Gator is also one of the contemporary artists selected by the Charles M. Schulz Museum & Research Center and Somerset House to lead some of the sessions, and he spoke on the influence that Schulz had with his work and drawings, and what stood out the most from the talk was the history behind the character of Franklin.

Franklin is the only major black character in the Peanuts comic strip, and was introduced in 1968. However, no one knows about how he came to exist within the comic strip around the time of the civil rights movement. 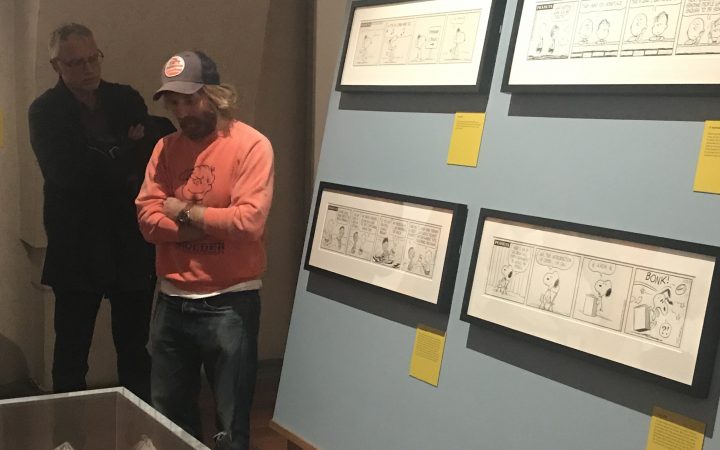 Benjamin Clark, a curator at the museum, told us that Franklin’s introduction was “so revolutionary in America in the summer of 1968. Black characters in comics were native racist stereotypes, on chain-gangs, in prison storylines or vaudevillian black characters.”

Schulz paved the way to bring positivity into society by creating Franklin, the shy but confident character we have all known to love. Franklin was introduced because Schulz felt “it was [the right] time to do so.”

In April 1968, the assassination of Martin Luther King Jr. encouraged a school teacher named Harriett Glickman to write to Schulz. She intended to try and make a difference in the current society at the time and asked Schulz to create a character that would be of African-American descent. This was revolutionary as at the time, the Civil Rights Act of 1968 bill, which outlawed discrimination had just come into effect.

Glickman wrote at the time: “In thinking over the areas of the mass media which are of tremendous importance in shaping the unconscious attitudes of our kids, I felt that something could be done through our comic strips.”

However, Schulz responded to Glickman’s letter that he had thought about the idea to do so but he did not want to “come off as condescending or patronising to black readers.”

Glickman then responded saying with the help of her African-American friends that could she could help with the creation of his first black character. Schulz received various letters from her friends, and it changed his mind, and he began work on creating the character.

Clark says that a man named Kenneth C. Kelly wrote to Schulz in June 1968, saying, “I’d like to express an opinion as a Negro father of two young boys. […] You mention the fear of being patronising. Though I doubt that any Negro would view your efforts that way, I’d like to suggest that an accusation of being patronising would be a small price to pay for the positive results that would accrue!”

Schulz read that letter then positively responded to Glickman. “You will be pleased to know that I have taken the first step in doing something about presenting a Negro child in the comic strip during the week of July 29. I have drawn an episode which I think will please you.” 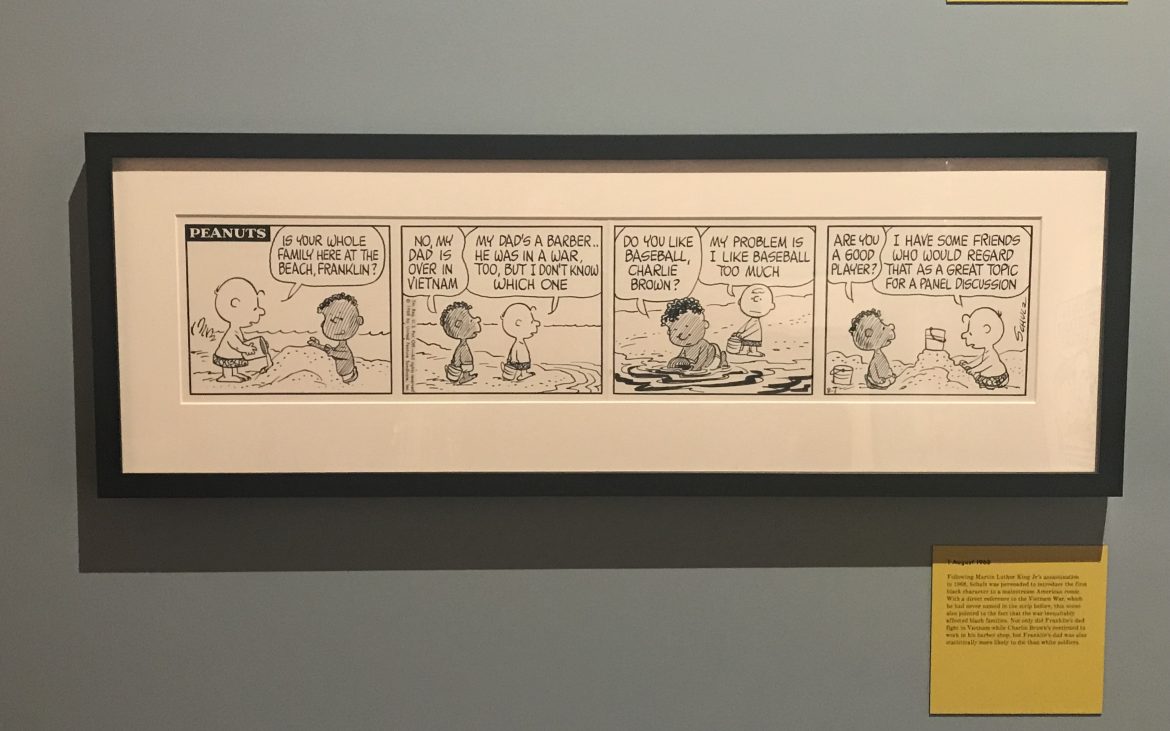 The Peanuts comic strip that Franklin was first featured in was published among a series of strips that week. “It read like any other Peanuts strip,” Clark said. “It just happens that one of the characters is black.” After Franklin was introduced to the Peanuts gang, the public’s reaction was considered to be “tremendous”. Schulz received a stack of mail from his readers saying “Thank you”.

In 1994, Schulz paid homage to Robbin Armstrong who also is a cartoonist and a huge fan of Schulz, during the creation of a TV Special, You’re in the Super Bowl, Charlie Brown. Schulz realised that Franklin needed a surname like the rest of the Peanuts gang and gave Franklin the surname of Armstrong.

Just like the other characters from the Peanuts gang every character was named and inspired by Schulz’s friends and encounters.

This leads us back to the artist talk with Russ Gator, who spoke about “the influential impact that the Peanuts gang had” on the developing society at the time by introducing Franklin at a time that was “perfectly right”.

The Good Grief, Charlie Brown exhibition is currently on now at the Somerset House until March 2019.