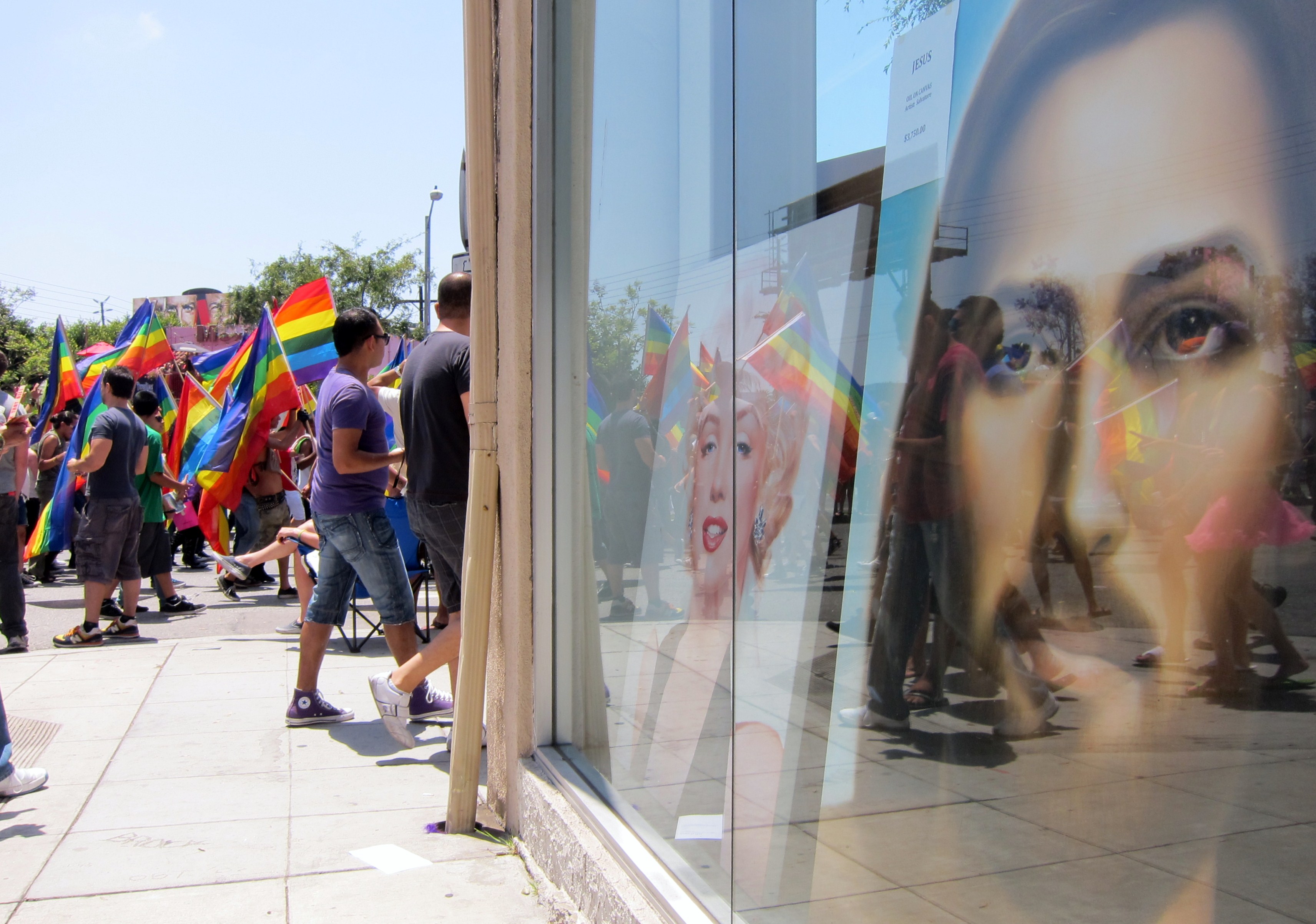 It is 5:00 pm and Matilde, an English Literature student, walks through the pathways of Hyde Park, leaves crunching beneath her feet. The chaotic, bustling hour has finally passed.

Between the screeches of squirrels looking for food and overfed ducks, she shivers, messily trying to hone the art of simultaneously using Citymapper and walking. She’s looking for Farm Street, and a Jesuit Church tucked between Mayfair mansions and high-end galleries.

She plans to attend a mass for LGBTQ+ individuals, hosted by the LGBT+ Catholics Westminster Community, who describe themselves as “a community for lesbian, gay, bisexual and trans Catholics.” 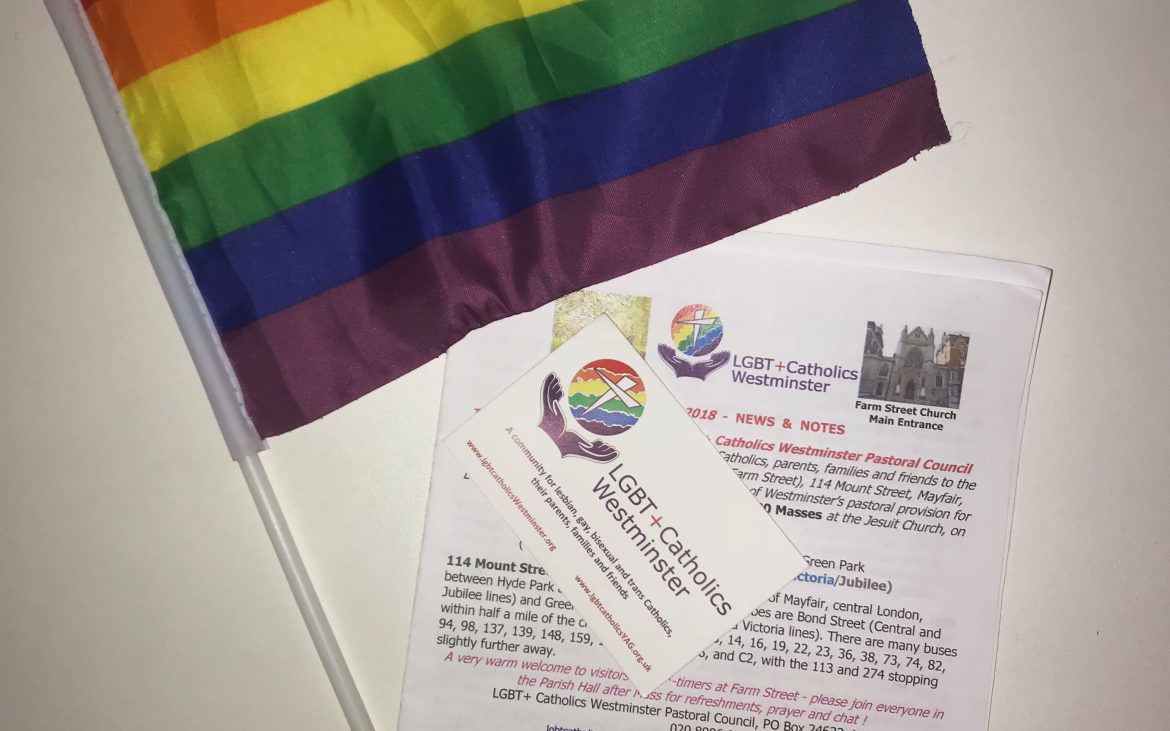 The group has been active for over 20 years and supports LGBTQ+ Catholics and their families. [Beatriz Vasques]

The group meets every second and fourth Sunday of the month, alongside other parishioners — “All are welcome” is the maxim of the community.

This will be the first mass Matilde has attended in many years. Coming from a country deeply rooted in Catholicism, Matilde, who identifies as bisexual, attended a Catholic school and pursued a rather catholic education until she was 18 years-old. She had quite an abrupt break with the Church due to their “outdated views on women and the LGBTQ+ community,” which made her step away from something that was once a substantial part of her life.

“I had to deal with a big amount of shame, fear and loneliness when I was still trying to figure out my sexuality and discovering the ways in which it would be compatible with my beliefs at the time,” explained Matilde.

Matilde’s break with the Catholic Church isn’t uncommon. Over the years, the Vatican’s stance on the LGBTQ+ community has been rather ambiguous leaving substantial gaps for interpretation.

According to a study conducted by Gallup, almost half (42%) of the LGBTQ+ population in the US consider themselves non-religious. Recently, Pope Francis’ allegedly and confidentially told Juan Carlos Cruz, a victim of clerical abuse, who identifies as gay, that, “God made you like that and loves you like this and I don’t care. The Pope loves you like this. You have to be happy with who you are.”

However, a few weeks later, The Vatican Insider reported that the Pope had said, in a closed-door session for the Italian Bishops’ Conference, that homosexual people should not be allowed in the seminary.

Taking into account that both of these remarks were considered to have been uttered privately, it is rather hard to assess the veracity of the facts. Likewise, the Vatican has never assumed a firm position on the subject, which contributes to the ostracisation of the LGBTQ+ community within religious circuits.

The LGBT+ Catholics Westminster group has been trying to tackle this palpable divide between the community and the Church. It all started 20 years ago, recounts Martin Pendergast, one of the priests and coordinators of the group, who has been watching its growth since the very beginning.

On April 30, 1999, a fascist bomber planted a bomb at the Admiral Duncan Pub, a gay pub in Old Compton Street, in London’s Soho — three people were killed in the attack, and more than 81 were left injured.

A mass was organised in a convent nearby, two days after the bombing, in order to mourn those who had died in the attack. It brought a substantial number of people who identified as LGBTQ+ to the church, and a monthly mass that catered the community started being organised once a month. The convent ended up closing, forcing the group to relocate to another parish nearby, an Anglican church. Nonetheless, the relocations didn’t stop there.

According to Pendergast, throughout the years, the group has had to relocate three times, with the Church of the Assumption, a Roman Catholic Church near Piccadilly Circus, being the most difficult relocation. Protests were made by more conservative churchgoers, who did not agree with the existence of the group.

“They became very disruptive, they wrote letters to Rome making all signs of accusations against us. We even had the get the police involved, it was very difficult,” said Pendergast.

“I had to deal with a big amount of shame, fear and loneliness when I was still trying to figure out my sexuality and discovering the ways in which it would be compatible with my beliefs at the time.”

In 2013, the Cardinal of the church, one of the senior ecclesiastic leaders, ultimately asked the group to relocate to Farm Street Church, as he felt the situation had become out of control.

The group has now been in the Jesuit church for five years and works closely with a significant number of Queer Catholics, promoting their integration and acceptance within the church.

They host inclusive masses and a programme called “Building a Bridge”, which brings members of the LGBTQ + community together with heterosexual people, to try and assure that all parishioners can feel welcome.

Keith Barltop, 71, is one of the priests who works closely with the group. He joined the cause in February 2015. Since then, Barltop has given talks, hosted seminars and written prolifically on the LGBTQ+ Community and the Catholic Church, with the aim of bringing both parties closer.

“If LGBTQ+ Catholics feel estranged from the Church, the first step is to assure them they are welcome, then to explore with them the issues around their sense of estrangement. Often they have encountered homophobia, so simply assuring them this is not acceptable and showing a welcoming attitude can help them,” said Barltop. 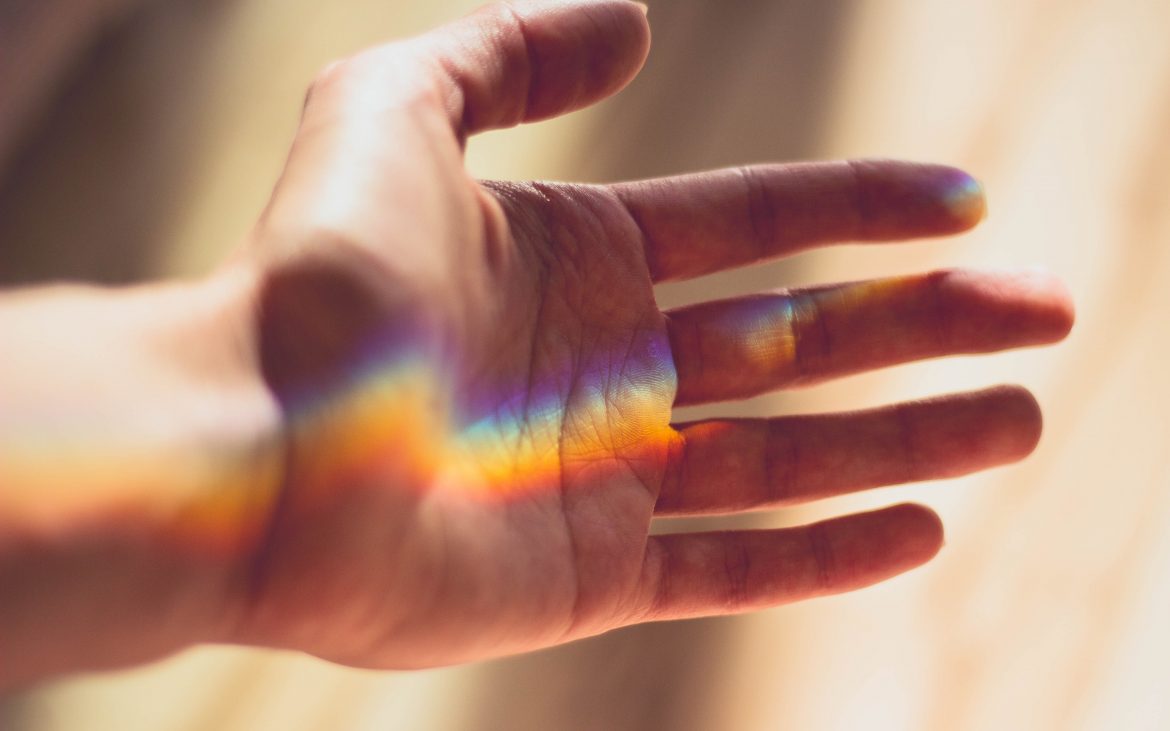 After each mass, refreshments and tea are usually provided in the Parish Hall, for those who wish to join in for a prayer and a chat.

Nicolas, originally from Paris, was present at the gathering after the mass, and smiles widely when asked about its connection to the group. He found it during the Pride in London event, in 2016. For more than ten years, he longed for a community with these values, a place where his sexuality and religious beliefs could co-exist. When he saw the group’s stall at Pride, he took one of the leaflets and attended the mass on the following Sunday.

Nicolas has now been an active participant of the group for more than two years: “This group helps us lead our faith and not feel ashamed of who we are, it’s very welcoming and supportive. It reassures us that there’s nothing wrong (in being LGBTQ+) and that in fact, even the church understands our struggle, our life and that the message of Christ goes beyond sexual or gender differences.”

Like Nicolas, many other LGBTQ+ parishioners have joined the group. Michelle has recently moved from Brighton to London. She recalls how looking for the group online was one of the first things she did when she moved to the city: “This is the first thing I googled when I first arrived, I’ve never seen anything like this. Even coming from Brighton, which is very gay-friendly, there was nothing like that.”

Although this group is building a steady and much-needed bridge between the LGBTQ+ community and religious discourse, there’s still a long way to go; creating more safe spaces like these is of extreme importance for minorities that are often mistreated and left out.

“Many LGBTQ+ people are still not welcome in Church, they’re kicked out of confessional, if they go to confessional, some priests can be very negative, that’s why these spaces are so important,” said Michael Pendergast.

It is now 8:00 pm. The sky is pitch black and most locals have retreated to the comfort of their homes, Matilde leaves the church after the mass and gathering. It is now time to go home and reflect on what this day has shown her.

“When I was discovering my sexuality, I was too scared to talk with my parents, my local priest or the people at my school because I thought they would judge me. I believe that by creating these kinds of spaces, a community of individuals who support each other and who are very sensitive to the very specific problems that come with being LGBTQ+, and with being a Catholic LGBTQ+ person, is born, and that is vital,” said Matilde.

The group plans on attending Pride in London next year and keep on running monthly masses. Everyone is welcome and that is how it should always be.

Faith comes in many hues, and we should always strive to make it as colourful as possible.