For a painter, there are not many accolades that go higher than having your painting exhibited in the National Portrait Gallery. So why then, did artist Helen Masacz, invite the public to deface her portrait of the former Foreign Secretary?

“When he was Mayor he seemed like an okay guy, unusual, affable, quite fun. At the time I felt he had the people’s interests at heart, I liked the idea that I could paint him with his sort of crazy persona,” Helen tells me at the launch of her collective’s latest exhibition, Face Value. 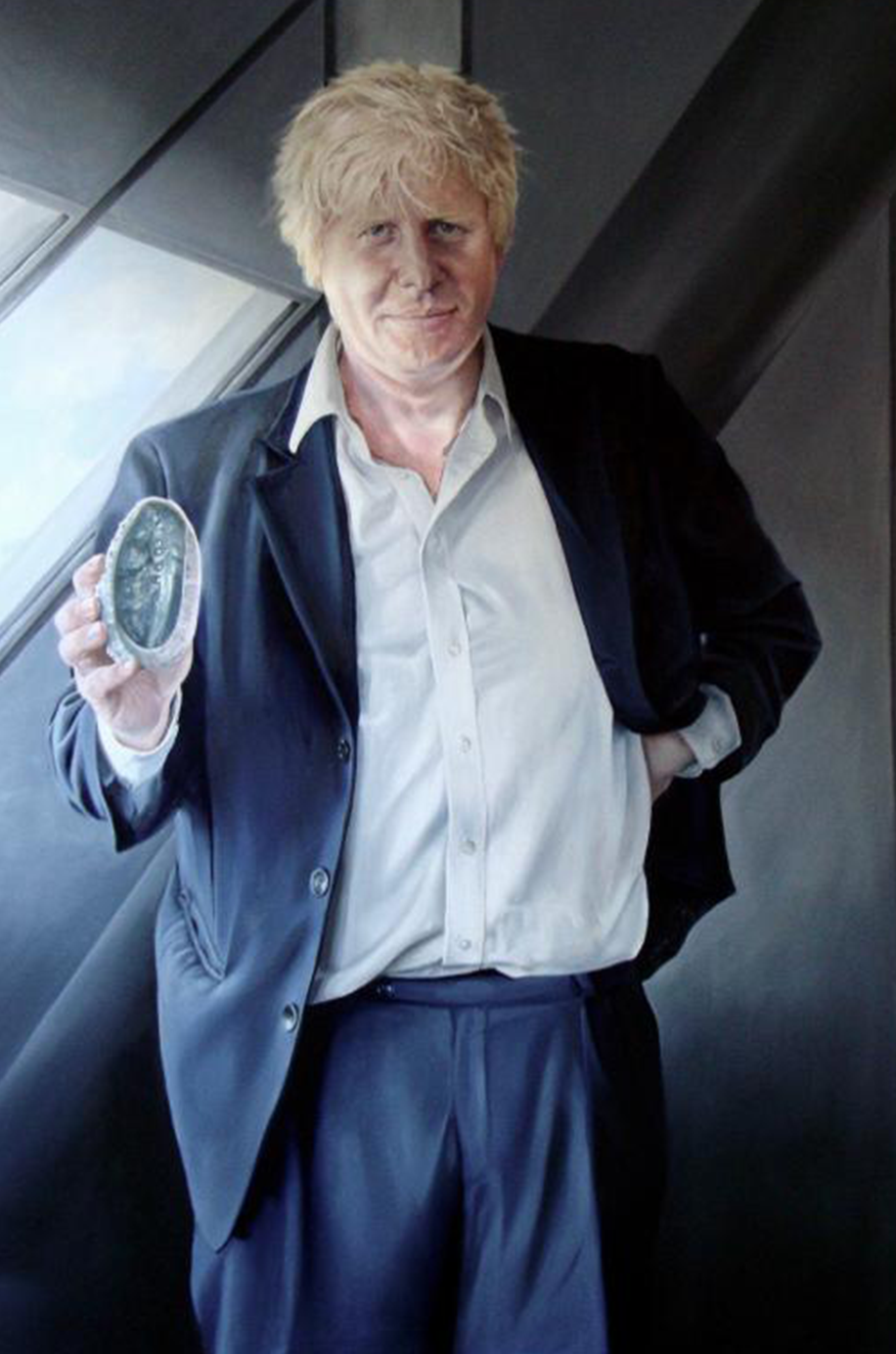 The original portrait, before the amendments. [Helen Mascaz]

Back in 2010, Masacz was asked to paint the ‘soft on the inside, hard on the outside’ Mayor, as objectified by the mollusc he holds in the original. But since then and like most of the country, the course of events reshaping Britain’s political history have come to change opinions of Brexit-bastion ‘Bojo’.

“Brexit was the dark hole. The propaganda, the false promises,” she says. The keyword of the day for the last two years; it’s sent the UK into moral distress, political polarisation and saw 700,000 Remainers walk London’s streets last month in the hope of a second referendum. “Brexit was the dark hole that things slid down after he was Mayor,” said the adoringly-shameless artist, “my respect for him plummeted.”

Boris famously championed the Leave campaign, once declaring, “The 23rd of June could be an Independence Day for Britain.” His overzealous, unattainable statements about the NHS, immigration and overall blind national pride were the “selfish, underhanded” remarks that made a once-charmed Masacz, completely perturbed by her painting.

“When I got it back from the gallery after it went on tour, I said to my students ‘if you got any paint left over, just use your pallet knife and smear it onto the painting.’” In an age where the public craves their voice heard, Helen said: “it can be a mouthpiece for people, it’s good to just express yourself.”

The painting was displayed at the Royal Opera Arcade Gallery for the public to have their hand at giving Boris a Cover Up, as the piece is now called.

On opening night, the guests started speaking in colourful explosions of orange, yellow and green brush strokes. These great swooshes of colour, backdrops to graffiti in bold white pen: “TORY BASTARD”, “Betrayer of the classics!”, “Eat The Rich!” and “Bad Hairday 🙂 !” The initial coat to the Cover Up was a broad coating of pink, from a young lady in a protest for feminism.

The event, not far from the original painting’s home, was a launch for the exhibition of Masacz’s art collective, Lot 5, whose aim is to reconcile contradictions by applying traditional techniques to modern themes. A truly talented group of artists’, whose crafts are rightfully deserving of the grand location situated amidst the Ivory Towers of Pall Mall.

Johnson resigned from his role as Foreign Secretary in July 2018, followed a few weeks later by his younger brother, Jo, who resigned from his post as Transport Secretary. Considering the contextual relevance of Cover Up, is the Johnson era over? Bookmakers Ladbrokes, Paddy Power and Betfair have odds of 6/1 on the blonde-bombshell to be the next PM, only Corbyn is more favoured, so maybe not? 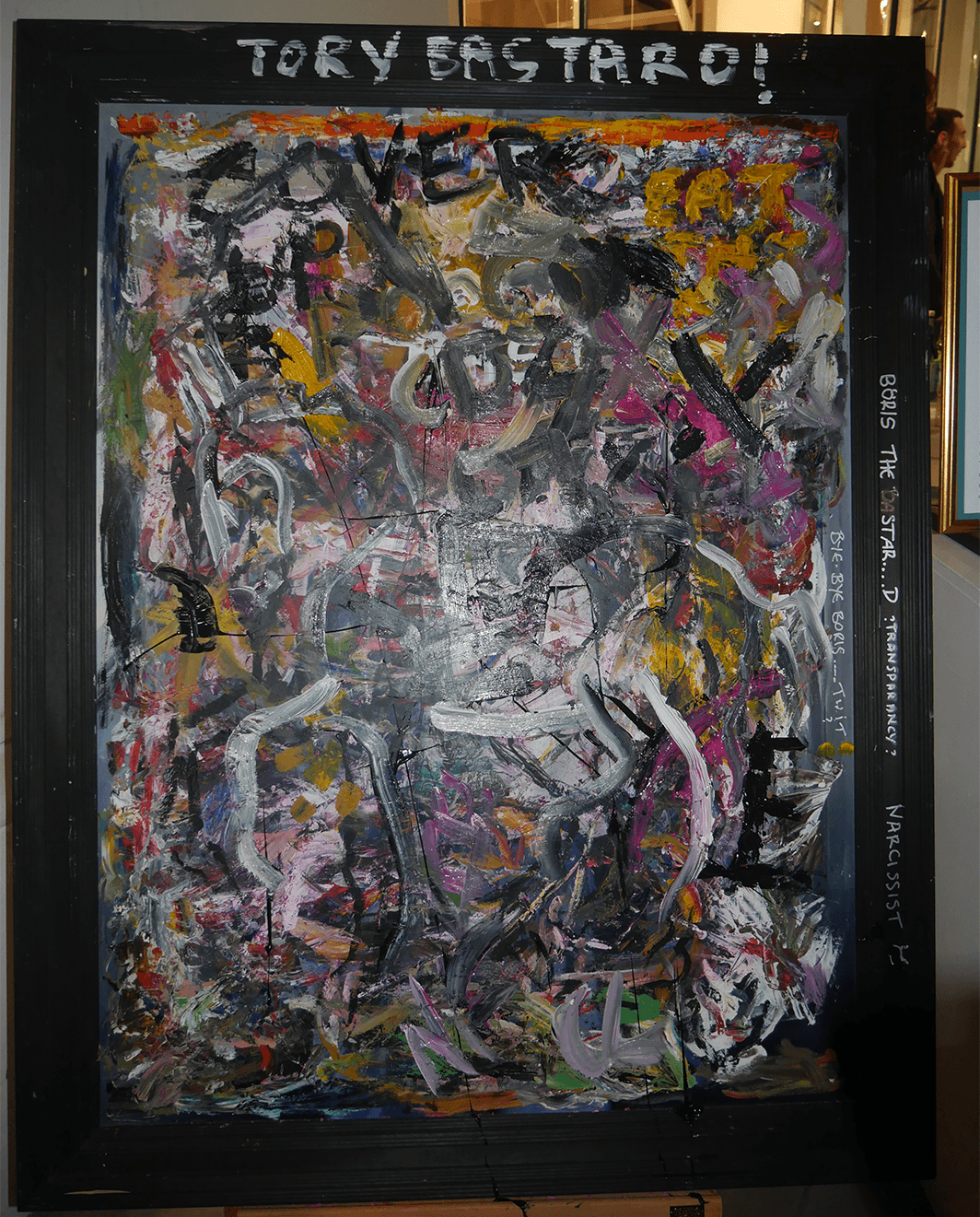 Receiving a lot of hate from tabloid readers via e-mail but adulation at her event, Helen said: “I think most people are on board because they’re also very disappointed but I think there are quite a lot of Daily Mail readers that still think Boris is good for the country, I think he sold them down the river and they still believe in him but I don’t understand that, so I’ve had quite a lot of hate mail, which I don’t care about I’ll just delete it.”

Throughout the night there were raffle tickets sold, with the new collaboratively-created painting being the first and only prize. “All the proceeds from the raffle go to a charity called Shelter for the homeless, and whoever wins this will have a piece of history I suppose,” shrugged Masacz.

Boris Johnson couldn’t say much under all the paint but recently asked the DUP conference to “Junk the backstop” and cancel Theresa May’s latest deal with the EU.

With Brexit Day (March 29, 2019) approaching, the only thing good about it thus far has been the art; notably that of Cold War Steve, Gavin Turk and of course Helen Masacz of Lot 5.