Kelfala: Orphaned by the mudslide

I stood speechless at the foot of Mount Sugarloaf. The desolate cliff face stands as a constant reminder of the mudslide that devastated Sierra Leone in the early hours of August 14, 2017.

One year on, rubble underfoot, I look up knowing that the bare mountain staring back at me once housed an entire community of families that went to bed the night before, expecting to wake up the next day. Instead, the catastrophic mudslide resulted in 1,141 people being declared missing or dead.

I had spent the previous few days travelling around Freetown meeting survivors of the mudslide. Nothing could have prepared me for their horrific accounts. Now the emotion was amplified as I stood at the base of the mountain that claimed everything and so many that this community had known and loved. 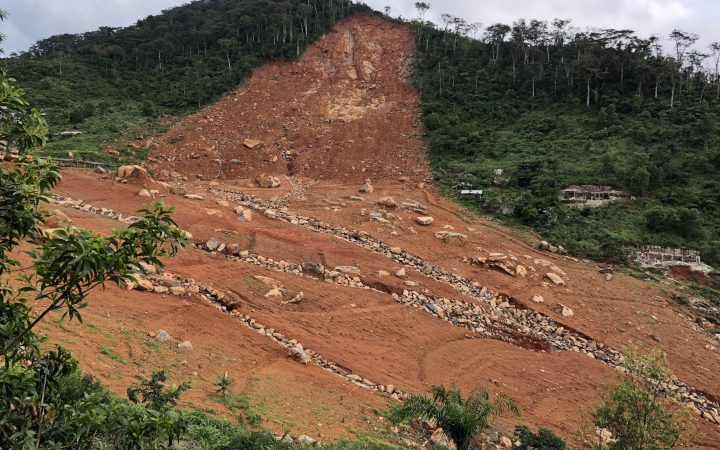 For a city suffering from extreme poverty, days of torrential downpour had resulted in treacherous conditions, especially in Freetown’s slum communities. The severe weather had put the city’s fragile infrastructure under an impossible strain. Then it was hit by one of the deadliest natural disasters Africa had suffered in recent years.

Freetown social worker, Jinnah Kampbell, showed me around one of the worst-hit communities, the mountain ‘town’ of Regent. He was among the first responders after the mudslide had struck. At the scene of the tragedy, working with international NGO, Street Child, he tells me of the gruelling relief efforts and recalls the sheer number of corpses that lay on the ground where a once vibrant community had stood.

It was reported that the morgue at Freetown’s Connaught hospital was so overwhelmed with bodies that many were stacked on the floor.

Jinnah recalled a young boy discovering the body of his own father. Adamant that this boy’s story needed to be told, Jinnah organised for me to meet this incredibly resilient young man, Kelfala.

“On the 13th August, I left my home to spend the night studying for my upcoming exams,” 17 year-old Kelfala told me.

He had left his hometown to spend the night with friends, leaving his father, mother and five siblings asleep in their makeshift house. Whilst studying, news had spread that an incident had occurred near his community. 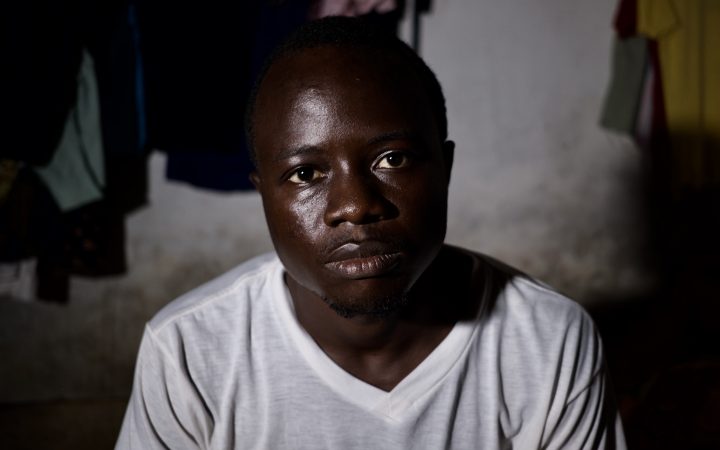 A victim of Freetown’s 2017 mudslide, Kelfala recalls the trauma of discovering his own father’s body [Daniel Wheeler]

He recalled how he couldn’t even identify where the house was, the huge mass of mud had ripped through the community destroying everything in its path and engulfing the hillside in rubble and debris. Describing the utter chaos he continues, “I couldn’t access the area properly so I took another route.”

Amidst the turmoil, Kelfala had to remain focused on finding his family. Navigating his way through the complete destruction, Kelfala stumbled across a human arm sticking out of the rubble. Taking a moment to compose himself, he recalls, “I saw a hand in the dirt, and when I got closer I knew it was my father’s. I could identify it because of a gun-shot scar he received in the war as a soldier. I knew it was my father’s hand.”

Kelfala broke down and desperately began to dig, attempting to remove the debris that was crushing his father’s body. He was followed to the site by his friends. Panicked and traumatised themselves, they attempted to console him. The relief workers frantically recovering the corpses spotted Kelfala attempting to dig around his father’s body with his bare hands. They dragged him away for his own safety.

“The people that were working there didn’t allow me to keep digging, they removed me from the site,” he said, tears in his eyes.

“I always think of my family and I always cry if I have any memories.”– Kelfala

Seeing his deceased father’s hand sticking out of the rubble was the last time Kelfala laid eyes on any of his family. He was unable to recover any other bodies of his mother or brothers or sisters.

Kelfala had to turn his back on the place he called home, the place that his sisters and brothers, the youngest only six years old, had died.

Left with absolutely nothing and nowhere to turn, he reached out to relatives on his father’s side of the family. Desperate to find any refuge from the suffering, he went to stay with his paternal uncle, but unfortunately, he did not feel welcome.

“They didn’t really treat me well, my uncle’s wife seemed angry that I was there and they didn’t support my education. But I had no other relatives to turn to.” 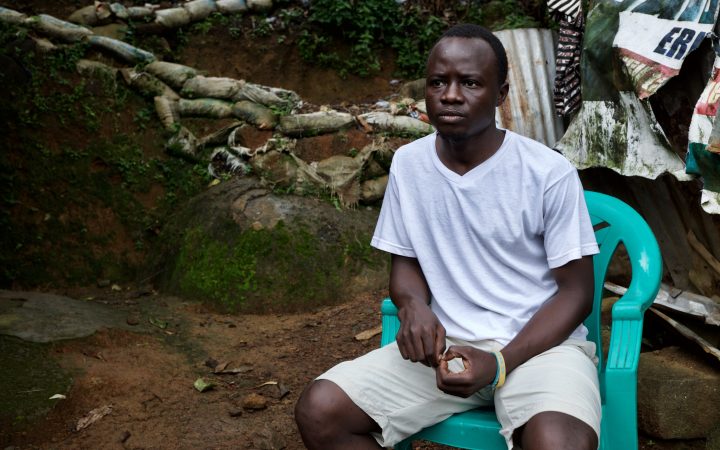 Before he died, Kelfala’s father worked as a builder where he managed a few young apprentices. With no other options, Kelfala turned to one of his father’s apprentices, hoping he would help him find somewhere to stay. A year on, he is living with one of the men in a small makeshift shack perched on another dangerously steep hillside — one which I can only imagine resembles the ill-fated Mount Sugarloaf.

Abandoning the education he had worked so hard to achieve, and his dreams of becoming an accountant, Kelfala has joined the young man he lives with working tirelessly on building sites around the city, attempting to make enough money to survive.

Looking down at his battered hands, Kelfala explains, “Life is not easy, it’s a challenge to make enough money to eat, I am not used to hard labour, it is very difficult. I’m on my own and I don’t feel well at all.” Very distressed, Kelfala continues, “I always think of my family and I always cry if I have any memories.”

“I don’t know what will happen to me in the future. I really want to continue my education to move forward, it is very difficult.”

In a report published last September, the World Health Organisation emphasised the importance of supporting the psychosocial needs of those affected by the mudslide in the disaster response and recovery efforts.

“They were traumatised, sometimes when you talk to them they don’t even respond, it takes them sometime before they start talking to you.”

Their report states, “Trauma is a major issue for those affected. Many families have been displaced and have relocated to makeshift structures. Many children have also been orphaned, staying with family members, often wanting for essential resources, or in camps.”

Speaking about the psychological trauma endured by the children of the hillside communities, Peter Kargbo, founder of Future For Children in Sierra Leone, told me: “some lost their relatives, some lost their mothers, we still have orphans among them. Above all they were traumatised, sometimes when you talk to them they don’t even respond, it takes them sometime before they start talking to you.”

The catastrophe that took place in the early hours of August 14, 2017 was labelled a natural disaster, but it’s no secret that a combination of man-made causes were behind the tragedy. Population growth, deforestation and a hillside of shantytown settlements have all been identified as contributing forces to the mudslide.

Only days after the disaster, Makmid Kamara, Amnesty International’s Deputy Director of Global Issues, said: “while flooding is a natural disaster, the scale of the human tragedy in Freetown is, sadly, very much man-made.”

With climate change threatening, the government of Sierra Leone is being urged to take action in order to prevent further catastrophic disasters. It is imperative to ensure other children do not have to go through the same horrific ordeal that Kelfala had to endure.