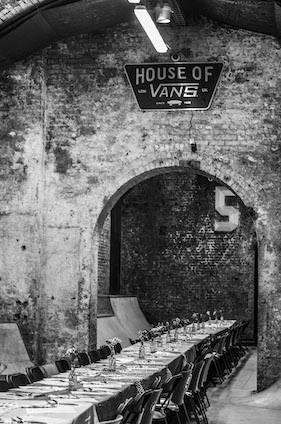 Inside House of Vans [Nour Hassaïne]

For one evening, London’s House of Vans, situated in Waterloo, wasn’t filled with skaters. Instead of the noise of skateboards rolling up and down the ramps, the city’s skating epicentre welcomed a Palestinian Plant-based hip hop charity dinner, organised by What The Fattoush?.

Funds were raised for SkatePal, a non-profit organisation founded by Charlie Davis, which works with communities in Palestine to share the benefits of skating amongst younger generations.

On arrival, we were welcomed into a room filled with different fashion items from Hype Peace, Done London and SkatePal’s merchandise. Works of art from artist and designer, Benny Normal, were also on display. The artist combines his graffiti writing skills with sculptures which are made with the use of 3D technologies. He exhibited a small collection of bright sculptures of half-eaten doughnuts which brightened up the concrete space.

Graffiti culture and skateboarding culture have a history together, whether you decorate skateboards or skateparks such as London’s iconic cave on the Southbank.

Done London excels at representing this relationship between different subcultures; at the event, the brand exhibited its clothing but there is definitely more to it besides a fashion brand. They also offer screen printing workshops and overall, the outlet is a combination of subcultures of skateboarding, graffiti, BMXing and the music scene from London.

One more stall at the entrance also caught our attention, Hype Peace’s. The brand was created by graphic designer ‘M’ and fashion designer ‘J’, who are famously known for their Palace-inspired logo with a Palestinian twist in support of the country. Hype Peace has established itself as a philanthropist brand which supports different NGOs and charities. 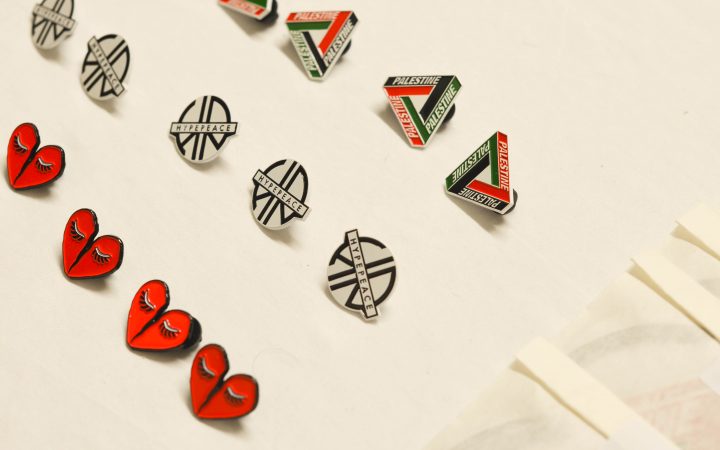 For the Palestinian collection, the brand works with Sharek Youth Forum, an independent, non-partisan Palestinian initiative which encourages youth to become active participants in Palestinian’s society and its issues.

“He always supported the Palestine cause,” ‘J’ told us when asked about how it all started. ‘M’, a graphic designer from Belgium, created the Palestinian logo in 2016. While he was not interested by the idea of putting the artwork on T-shirts, ‘J’ went behind her partner’s back and took the graphics, which were printed on T-shirts and hoodies. Three years later, the brand is also supporting the victims of the Syrian conflict with their “Pray pour Les Syriens” collection. They donate 40% of their funds to the Preemptive Love Coalition, an organisation which brings relief and creates jobs in Syria but also Iraq and the United States.

For the Hip Hop The Wall event, the brand re-designed their Palestinian collection in a collaboration with SkatePal, called “SK8 Palestine”. A line of white T-shirts and hoodies were made with Hype Peace’s Palestinian logo and the letters SK8, hand-stitched by the founders with red sewing thread. In keeping with the theme of the event, funds raised from the clothing line are donated to SkatePal.

Five years ago, 19 year-old Charlie Davis travelled to the city of Jenin in Palestine, situated in the northern West Bank. The young skater taught English and Music in a youth centre: “I took my skateboard with me and I used to skate around after class with the kids.”

This created curiosity and excitement which gave Davis the idea of bringing the skateboard culture to the West Bank. Five years later, the fruition of this idea led to a non-profit organisation called SkatePal.

“It’s a sport that you do together but you do it on your own and it’s not competitive. There’s no hierarchy. It doesn’t matter your age, your creed or your gender. In Palestine, there aren’t many sports that the boys and girls can do together.”

Originally from Edinburgh, Davis went back to Scotland to pursue a degree in Arabic after teaching in the youth centre. “After my degree, I sort of got in touch with different people to see if they wanted to do an eight-week skateboarding summer project,” he explains.

The project began in the city of Ramallah, where he built a ramp for the classes. “Then it kind of snowballed from there. So other skaters from over here [UK ] heard about it and were like ‘Oh, can I come and help out’ and other kids in Palestine wanted to come to classes.”

The initiative kept growing when local councils started asking the NGO to build more skateparks. SkatePal has now built four concrete skateparks in Palestine and organises classes all year round thanks to the help of about 50 volunteers. There is a combination of people who give their time and/or equipment, and fundraising events like Hip Hop The Wall, donors, grants and the sale of merchandise are what allow the NGO to develop new projects.

Following the warm welcome of tees and hoodies, the main part of the event, the dinner, took place in what felt like an endless corridor. Between skating ramps, a long line of tables seated 85 people. Each of the seats had the hip-hop-inspired menu with dishes such as ‘Soup Doggy Dog’, ‘Run DM-3’ and ‘Boom Moussaka-laka’. 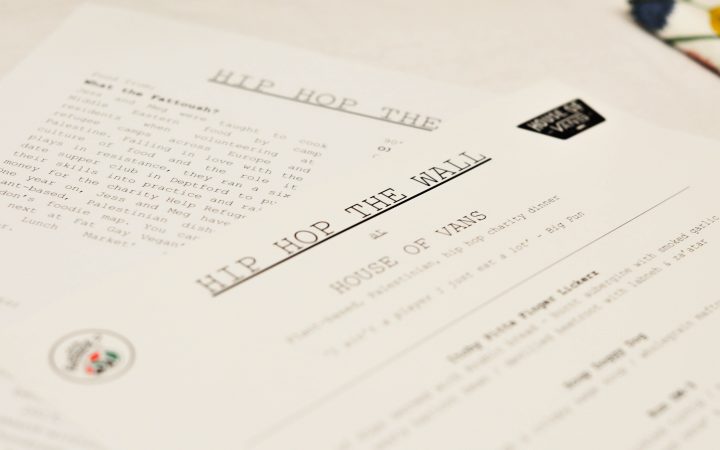 Menu and story of each organisation [Nour Hassaïne]

“Hip Hop lyrics and punning food is in Jess’ blood,” Meg, one of the founders of What The Fattoush? tells us. Meg and Jess, the two girls behind the food organisation, met on their way to volunteer in Calais, in France. While volunteering in refugee camps across Europe and Palestine, the founders learnt to cook Middle Eastern food from camp residents.

After working with companies such as Boiler Room, Lush, Amnesty International and organising a fundraising dinner for Help Refugees, they decided to organise one for SkatePal. The founders explained how they always donate 10% of their profit to the NGO after bonding over a Palestinian dessert. “I’d just got back from a trip to Palestine in 2016, and I was talking about knafeh, the best Palestinian dessert ever, very loudly in a cafe in Deptford,” is how the story of how SkatePal and What The Fattoush? met, told by Meg. Food brings people together, and in this case, knafeh brought Meg and Phil, another team member of the NGO, together.

Themed around hip hop culture due to Jess’ love for the genre, the dinner made of the girls’ favourite dishes to both cook and eat was accompanied about music and visuals. On the one hand, South London’s MC beat maker and DJ, Oliver Sudden, performed a fully hip-hop-inspired DJ set, on the other, London-based graffiti artist, Tizer, created a small mural while guests were savouring dinner. 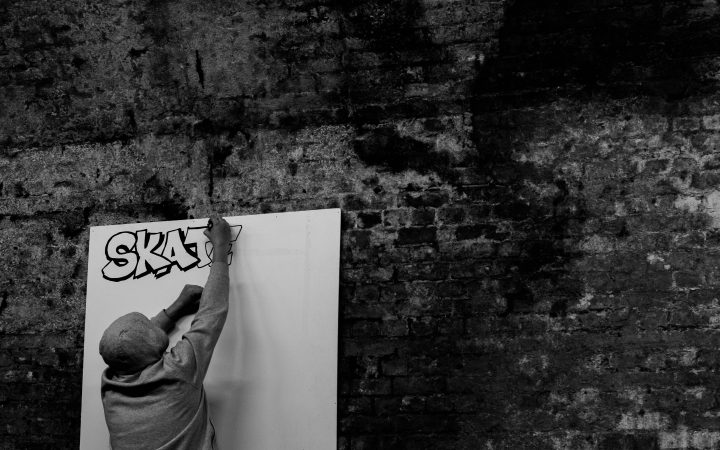 “What The Fattoush? put their hearts into the food. You could taste all the ways in which they want to preserve the Palestinian culture,” said Kamila, a writer who volunteered at the event. Born to a Polish mother and a Libyan father, the writer didn’t have the opportunity to learn about her Arab history due to her father’s absence. “The Arab woman in me is cut in half,” she explains. After following the civil war in Libya, she told us how “People over there, they live on their lands but without being fully free. This is my pain that perhaps Palestinian people feel too.” The writer deeply appreciates the work by the different fashion brands, by SkatePal and What The Fattoush?, which she described as a kind of modern activism.

“It is resisting something in a more calm way, more of a steady wave rather than a violent storm. But even the steady water can rise high. You only need to ask the wind to blow harder. So if I can be part of this event, just for a day, then why should I not be?”