“It will be China and the US. Now, where is Europe on that map?” Germany’s ambassador in London, Peter Wittig

The UK voted to leave the European Union and is expected to do so on March 29th 2019. An event with so far, unpredictable economic and political consequences.

Meanwhile, October 2018, in the Chinese South Sea, the Chinese warship Lanzhou warned US destroyer Decatur that they are on a “dangerous course.” If the Americans do not change course they will “suffer the consequences.” The Americans responded with “we are conducting innocent passage” and still the Lanzhou prepared for collision. When only 40 metres apart the Decatur moved to the right and avoided the collision – just in time.

In David Cameron’s EU speech at Bloomberg, he talked about how the EU’s original main purpose was securing peace. He continued however by saying that this had changed: “Today the main, over-riding purpose of the European Union is different: not to guarantee peace, but to secure prosperity,” that nowadays the main challenges would come from outside the continent and that “we should be in no doubt that a new global race of nations is underway today.”

Germany’s ambassador and diplomat, Peter Wittig, expresses this point of a future different world order more specifically. According to him in 20 to 30 years “it will be China and the US” as both countries perceive the future world as a “bipolar world, a world with only two powers that matter. Russia will be a side-show in their [China’s and the United States’] view. It will be China and the US. Now, where is Europe on that map?”

Wittig went on to say: “We are 511 million European citizens. We matter as an economic factor. We matter less as a military and political power. I cannot see how the UK can be relevant in 30 years, in 40 years as a stand-alone power in this configuration.”

Even though Russia is still considered as a threat that cannot be underestimated, “what the Russians are doing pales in comparison to what China is doing across this country,” said the vice president of the United States, Mike Pence, in a speech early in October 2018.

In Robert D. Kaplan’s view, a senior fellow at the Center for a New American Security and advisor at the Eurasia Group, there is a cold war already going on between the two superpowers identified by Wittig; he also regards Russia as secondary.

So where will the UK stand after leaving the EU? On the one hand, Britain is obviously connected to the Commonwealth States. However the leading states of the Commonwealth, Australia and New Zealand, Canada and South Africa, have already moved on from the nostalgia of the great British Empire, economically and politically as well in terms of foreign policy, and are increasingly aligning themselves to either the United States or China.

South Africa’s biggest import and export destination is China, “Australia and New Zealand have refocused their foreign and security policy on the Asia-Pacific region, in which China is the dominant player. Canada has defined itself as an independent-minded US neighbour with increasingly strong Asia links to balance its traditional European ties,” states Quentin Peel, an associate fellow with the Europe Programme at Chatham House, in an article for the Financial Times.

Robert Saunders, senior lecturer at Queen Mary University of London and author of “Yes to Europe! The 1975 Referendum and Seventies Britain” has a similar perspective. He describes Brexiters as naive, saying they would “reduce geopolitics to a form of faith-healing, in which anything is possible so long as we believe.” Saunders also refers to Britain’s history of “losing its empire, its military preeminence, and its economic supremacy” and says that Britain could not build a better future on fantasies about the past.

This might imply that one of the more profound questions of the Brexit event is, whether the UK, without the EU, will be able to integrate itself into the new world to come. What will the UK do, politically and economically and how will this affect the EU’s and the UK’s common interest of securing prosperity? Will London be able to restore its elements of sovereignty which were lost during the process of European integration?

Respect for human dignity and human rights, freedom, democracy, equality and the rule of law. These are the values of the European Union. Some Brexiters argued that they want more freedom, democracy and better economic growth. If Remainers and Brexiters alike aim for basically the same values and the same goal, what is the Brexit debate really about?

Jochen Buchsteiner, Political Correspondent for the German newspaper Frankfurter Allgemeine Zeitung in London and author of the recently published book Die Flucht der Briten aus der europäsichen Utopie (Britain’s escape from European utopia) says that we should not only question the European Union but the West as a whole.

“No one would say that the UK is not in favour of the main goals the European Union pursues which is prosperity, rule of law, freedom, competitiveness. The real challenge of the Brexit vote is that the British say, we want to stick to these goals but we think we can achieve it better if we are not part of this Union. Furthermore, there are so many centrifugal forces now in place that, of course, what more and more Europeans tend to ask is: Is this [the EU] really the way forward?

“I think the main reason why no one is really debating this question is that most people are saying we have peace on the continent because we have the Union. But the question we actually have to ask is, would we have peace even without the European Union in this form,” Buchsteiner said at a book presentation in London. 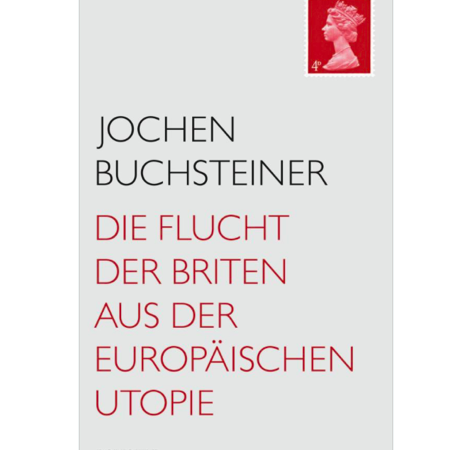 The European Union has brought us 70 years of peace after almost half a century of war, conflict and economic crises. “The leaders in the post-war generation perceived this as an essential peace project which was a guarantor for avoiding war on this conflict-willing continent. And this is what it brought us: 70 years absence of war, absence of conflict, and broadly speaking, stability, prosperity on a continent that has been torn apart for centuries,” states Germany’s ambassador in London, Peter Wittig, after Buchsteiner’s presentation.

Even though one of the founding fathers of the European Union, Winston Churchill, spoke about the “United States of Europe” in his famous 1946 speech in Zurich, he also wrote in an earlier essay “We are with Europe, but not of it” and “We are linked but not comprised.”

Whether or not Churchill would have voted “remain” or “leave” has, in some way, become part of the Brexit debate, yet, it is impossible to prove with certainty if he would have eventually voted in favour of Brexit or the EU and can only be speculated.

However, it is a fact that today we live in a different time, with a completely different set of circumstances. We have not, like Churchill, just experienced two world wars within 31 years and have not just witnessed the genocide of about six million Jews.

There are many discrepancies when it comes to the efficacy of the European Union itself. Was it for instance really this Union which has brought us more than half a century of peace and prosperity or was the Union just happening at the same time incidentally?

“Our only chance for Europe to remain on the map is to stay as united as we can be. With Brexit this will be more difficult,” says Wittig.

Brendan Simms, Historian and Professor of the History of International Relations in the Department of Politics and International Studies at Cambridge University offers a different opinion. He told the German magazine Der Spiegel that this nostalgic thinking of lost imperial greatness ascribed to the British was without any reason. He says if any country within the EU could stand alone and survive by one’s own efforts it would be the UK.

Simms justifies this by arguing that the UK is the fifth largest economic power worldwide, the fourth largest military power and has a permanent seat on the UN Security Council.

However, to the question if Britain could not only leave the EU but also Europe, Simms responds that this depends on whether or not the UK is able to find an independent role within this Europe as Britain’s history was in fact shaped by Europe, and today’s Britain will continue to be shaped by Europe in the future.

According to Simms, the question whether London can restore its elements of sovereignty which were lost during the process of European integration.

And yet, even if somehow Britain were to decide to remain in the EU, Simms questions whether this would really be the end of the story.