Elizabeth sits cross-legged on a bench in Granary Square; her bruised skateboard leans below her as she nervously checks her phone. She is dressed in her notorious “consumer culture hoodie” that has the McDonald’s and Nike logos sewn on and is embroidered with the words “not your customer, not my culture”.

She is the embodiment of anti-establishment. I wave for her to come inside the restaurant where we sidle through the roused conversations of lunch meetings to seat ourselves in a quiet corner.

Elizabeth Farrell, 20, has been a climate change activist since she was 17: “A walking billboard for climate change” is how she describes herself. Alongside completing her geography degree, she is an active voice in the environmental movement.

Using her Instagram handle, @glacier996girl, she aims to raise awareness of global warming. She does this by creating striking artwork and photographing evidence of climate change happening in urban areas. They are bold, never sugarcoating the realities of global warming.

However, this social media siren is an alter-ego for a young woman who struggles to connect with those around her. ‘Glacier Girl’ avoids my eye as she declines a cup of tea, opting for tap water instead. Having photographed herself in a flooded London area, she captions this picture: “Just a reminder that London is a floodplain and that climate change +/ sea level rise is not so ‘distant’ +/ ‘other’.” 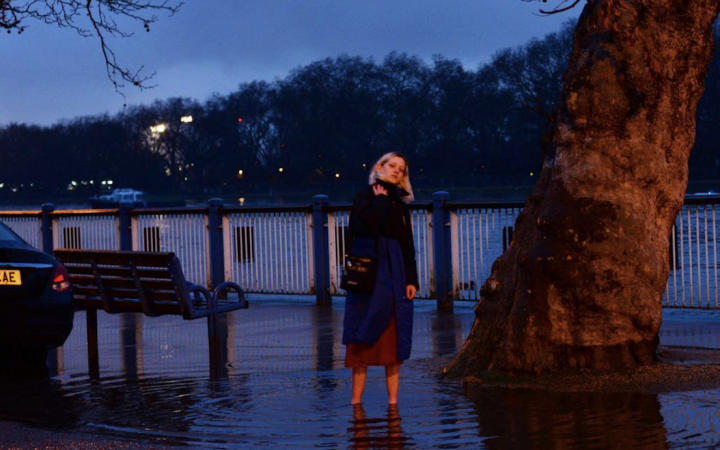 Her creative Instagram is what has led to her appearance in a number of magazines and media platforms, including Vice, where the photographer, Charlotte Rutherford depicts her crying for the glaciers and sweating because of global warming.

Most recently, Elizabeth spoke on a panel hosted by Gucci in Milan. Her anti-consumerist perspective shed light on how brands can take responsibility and actively participate in positive change.

This is part of the Gucci Equilibrium, a collection of Gucci’s brand values. Gucci promises “Our people are committed agents of social and environmental change and we take that seriously.”

Gucci has adopted a strict environmental policy that states, “We adopt solutions which rationalise and minimise energy consumption, the release of substances harmful to the environment and to humans”. In addition to this, they raise awareness by hosting panel discussions, such as the one that Elizabeth spoke at, and connecting with activists.

The Victoria and Albert Museum has also noticed ‘Glacier Girl’s’ talent. The museum showcased her work in their Records and Rebels exhibition alongside the legends of Woodstock Festival as a modern rebel, revolting against our consumerist society and the damage it is doing. The V&A was so taken by her talent that they also displayed her imagery at a Friday V&A Late.

This poster aimed to draw attention to the companies that are responsible for high emissions and encourage consumerism. “I want these companies to be held accountable”. On her Instagram, the exhibited piece is captioned, “not so futuristic…. There are no longer such things as ‘natural’ disasters, the intensity and frequency of events this month are caused by us & our lifestyles, wake up. This is climate change @everydayclimatechange”.

Elizabeth created this piece after the South Asia floods in August 2017 that killed 1,200 people. The floods were directly caused by global warming. 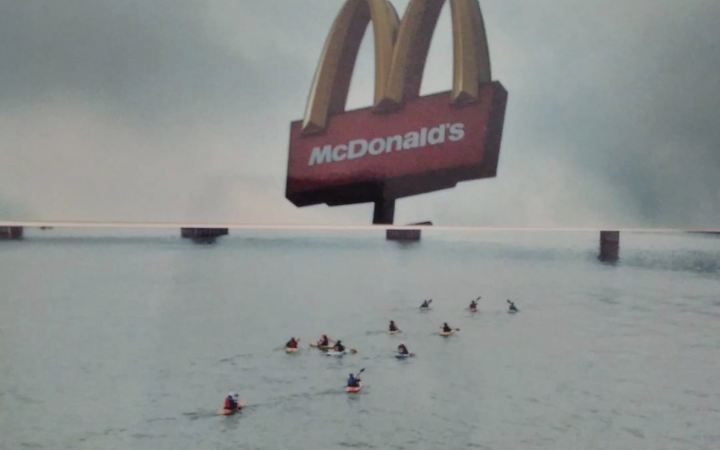 ‘I want these companies to be held accountable’ [Instagram: Elizabeth Farrell]

“The whole thing is my own learning process. It’s about me figuring out people. It confuses me all the time”. Her artwork intends to make others realise how we’ve been ‘brainwashed’. She wants to confront people with the reality that what we see as normal is “actually very destructive.”

Last year, Elizabeth was diagnosed with autism, and reflecting about it now she thinks “that made [her] realise a lot of things about why I’m interested in the environment and why I’m angry about that subject in particular.”

Women with autism feel alien to their gender, culture, and species. ‘Glacier Girl’ believes that she feels more of a connection with melting ice-caps than humans, making global warming, she believes, a more personal issue to her than to others. “I’ve always thought activism is a summation of anger but it always comes from a personal perspective”. Elizabeth believes that her anger stems from her difficulty with connecting with other people.

The isolation that ‘Glacier Girl’ faced while growing up with undiagnosed autism is what drew her towards the study of climate change, and to come to the conclusion that the people around her, those she could not connect with, were the cause. “When I look back at it before I didn’t know [I had autism] I was always feeling like I wasn’t human. Knowing logically that didn’t make sense, but led me to be angry at people and relate to non-human others.”

“Climate change can be invisible. People see it as a distant reality. So imagery can make something visible and confront someone with the reality of it by showing them that this is happening now.” Elizabeth wants her imagery to display the connection between consumer culture and the environmental movement.

“The consumerist lifestyle is hard to avoid.” She admits that she grew up in a “middle-class bubble with a high consumer lifestyle”, but believes that this is unavoidable in a “society like ours”. “But within that bubble, I felt like I was observing other people from the outside and being isolated watching that”.

Her confusion with this is what triggered her activism. Elizabeth wanted to alert people to the realities and consequences of their consumer lifestyle. By using her artwork to bridge the gap between people and climate change, she felt she could better understand people.

“I want to take a stand against society’s obsession with consumerism and brands.” This is what inspires her artwork. “Everyone was following these trends. What is it about this one little symbol? Why are there more successful symbols? You could have a circle on the same jumper but it wouldn’t hold the same value,” she explains when discussing the popularity of Nike.

“Climate change can be invisible. People see it as a distant reality. So imagery can make something visible and confront someone with the reality of it by showing them that this is happening now”

Social Activist, Naomi Klein explains in her film No Logo how our consumer behaviours have spiralled out of control. “The original brands used comforting logos that were often people, for example, Quaker Oats, that were essentially surrogate relationships for your local shopkeeper”.

Klein explains that this was because the brand needed to develop the trust of the customer. From this, brands have grown into selling lifestyles that consumers affiliate themselves with, creating a false sense of community. “We organise ourselves into brand tribes,” Klein explains.

These behaviours are what Elizabeth has observed in her community, and recognised as false and destructive. “This has drastically weakened our democracy because we have fewer and fewer places where we can relate to each other as non-consumers, as citizens,” Klein says.

The realities of consumerism trouble ‘Glacier Girl’ as she feels as though she does not have the same compulsion to consume as she believes others do. “I contribute to consumer society in other, unavoidable ways. Like shopping in giant supermarkets, or travelling on the tube.”

Uncomfortable, ‘Glacier Girl’ fiddles with her headphones, physically looking around for the words to reveal her feelings. “I grew up not knowing [about climate change] at all. Not in my surroundings, not at school”. She thinks that climate change should be taught more in schools. “We learn about it in terms of greenhouse gases but we don’t learn it as a social issue or our personal impact and the ways in which to mitigate that.”

“Fear grows denial,” Elizabeth believes that society’s lack of action towards global warming is down to fear. “I don’t even know anymore – maybe people have their own struggles, feel like they are already struggling so to add on ‘Oh, by the way, your struggles are going to get ten times worse’. It’s just too much for people to process.”

Of course, Elizabeth is not the only person concerned with climate change. The government has made moves to reduce our impact on the planet by reducing the use of plastic bags. The Guardian reported that England’s plastic bag usage dropped 85% after the 5p charge introduced.

It is clear that implementing legislation is the most effective way to make a change and grab the consumers attention. This charge is set to change to 10p as an extra effort to prevent their use. 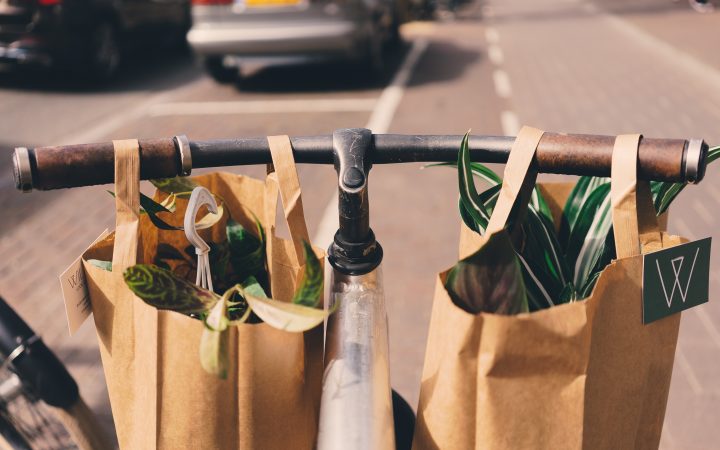 Frustrated by the facts, she blames others for not taking more action. “[The society] hides from it until they are directly affected by it.” Concluding that that government has the wrong priorities.

“People talk quite a lot about plastic, which surprises me. They seem to talk about it more compared to other things. But I think that’s what the whole issue is. Particularly in the UK, a government-induced policy is forcing people to talk about it”. Elizabeth refers to the 5p bag charge, believing that this is the reason for action against the use of plastic. “Nothing happens until people are told in a shop that plastic is bad.”

Supermarket customers have varied concerns in terms of plastic. Erin Adams, an administrative officer from London, said that the charge has not stopped her from purchasing plastic bags. “I still get them if I forget to bring my own, which is often. Or if they don’t fit in my regular handbag. But I would always try to bring a tote bag instead I don’t waste plastic”.

The charge may not have stopped people using plastic but made them more aware of the issue. “I knew about the plastic issue before, but it [the plastic bag charge] has made me more conscious of it,” Erin explains.

But using a tote bag instead of a plastic bag is not enough. Elizabeth feels that negating plastics or recycling can be used as an excuse to “carry on with business as usual.” She feels that recycling has allowed people to shift the blame from themselves: “People think you can do whatever you want as long as you recycle. It just makes you feel better about yourself. But not really because you’re lying to yourself.” Her anger is palpable.

We are used to seeing the phrase “Reduce, reuse, recycle” but what many don’t realise is that they are not just three options of what you can do with your waste, they are in order for a reason. “Recycling is not as important as reducing. That’s the main thing that I try to push forward with my work- reducing your impact and consumption in general.”

A caution towards societal fear has made Elizabeth careful with the language she uses when discussing the issue. “I always use ‘we’ when talking about the action that needs to be taken or the damage that society has done to the planet”. Elizabeth believes that collective action needs to happen in order to make impactful change. “Fear creates denial. So we have to approach the consumer in the right way.”

“If you try to look at things from an alien’s perspective, our consumer habits seem a bit insane.”