From Portugal, to the world. With love.

It’s December. The weather is crisp and the streets of Tavira, a small, charismatic town in the south of Portugal, are enveloped in Christmas spirit. Workers and university students have returned for their break.

The city is exceptionally busy for the entire month. I roam around the town’s Roman bridge, take in the river breeze and the melody of a violin player who busks, absentmindedly.

Patricia Nogueira, a communications graduate and traveller, agrees to meet me in a coffee shop downtown in order to discuss her current project, “À do Mundo” (a regional Portuguese pun on an expression that means ‘to see the world’) — a project entirely dedicated to the reporting of Nogueira’s travels in an honest and transparent way.

The place is crowded and buoyant: a mix of locals and British tourists sip on their ‘galões’ (lattes) and warm tea in an attempt to combat the chilly temperatures.

Over the next hour-and-a-half we discuss the intricacies of travelling on a budget, being environmentally-friendly whilst doing so, and travelling alone as a woman.

Patricia is 22 years-old, she graduated from her Communications degree in 2017, but decided not to pursue further education — she wanted to travel instead.

At the time, she was also keen on improving her English, which prompted her to research different options that linked her desire for exploring the world with the improvement of the language. She also started researching and reading extensively about different types of education and wanted to explore these on her own.

[pullquote align=”right”]“Everyone was telling me, ‘Turkey is extremely dangerous,  on your own, please don’t do that’. But I went anyway.”[/pullquote]

She ended up coming across the Erasmus+ Programme, a “programme for education, training, youth, sport”, which offers study, work and volunteering opportunities abroad for young members of the European Union, and applied for one of the programmes available in Turkey, a place she had always dreamt of visiting.

In the meantime, she started working as a freelancer in various marketing and copywriting positions. Freelancing, alongside her savings from previous summer jobs, has helped her be self-sufficient, whilst travelling.

“I’ve always wanted to go to Turkey and one of the [Erasmus+] projects was there. I applied and got in. Everything was included for an entire week, including the trip and accommodation, and I was allowed to travel by myself, which is what I wanted,” Patricia explained. 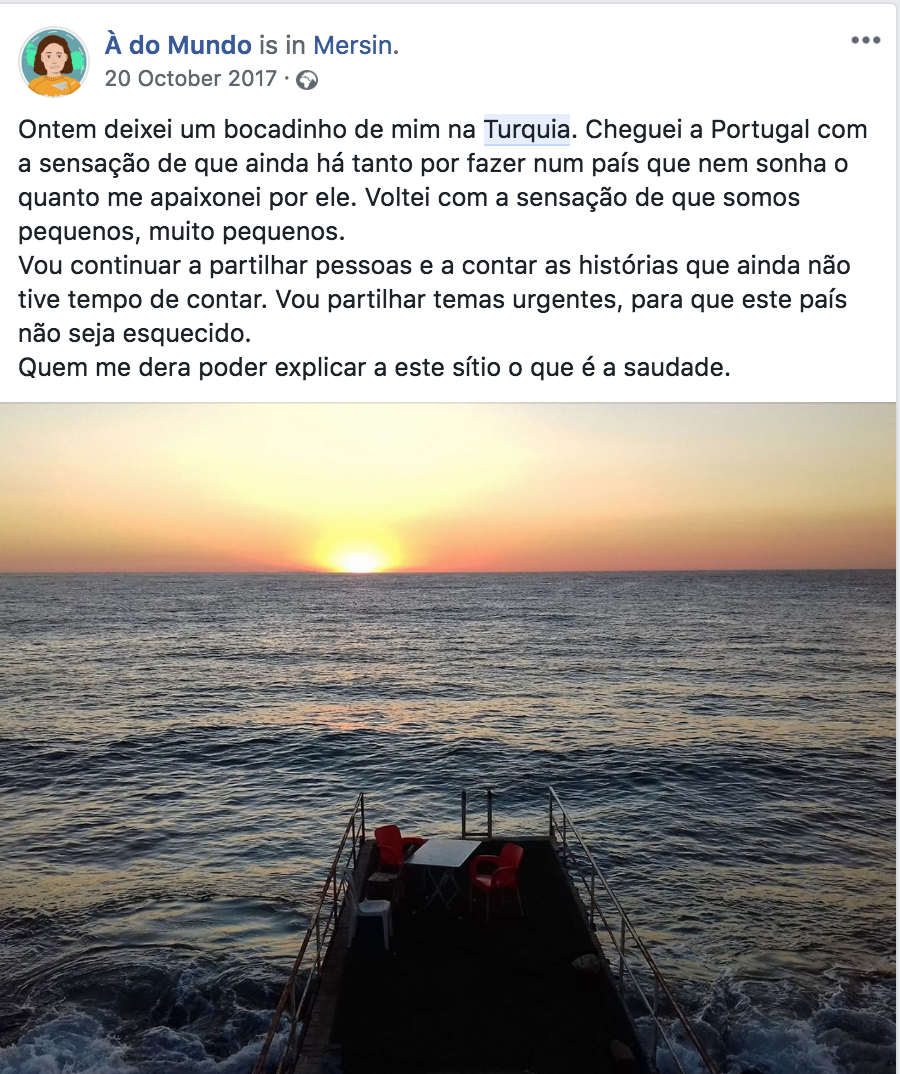 ‘Yesterday I left a bit of me in Turkey. I arrived in Portugal with the feeling that there is so much to do in a country (Turkey)  that doesn’t even dream of how much I fell for it. I’m back with the sensation that we’re small, very small.’ (…) — an excerpt of one of Patricia’s posts on her travel page, À do Mundo. [Facebook: À do mundo]

Initially, her trip was scheduled to last three months, however, she reduced it to a month. Loved ones started trying to deter her from staying for such a long time, due to Turkey’s ‘reputation’ of being a dangerous country, especially for a young woman.

“Everyone was telling me, ‘Turkey is extremely dangerous on your own, please don’t do that’. But I went anyway.” said Patricia.

At the time Recep Tayyip Erdoğan (Turkey’s President), was at his most critical phase, however, that didn’t stop Patricia, who wanted to see for herself if the country was as dangerous as commonly believed.  She then started gathering more information on the subject, in order to be acquainted with the on-going affairs occurring in Turkey. Once she arrived, she decided she wanted to start reporting on her experience.

“I had met people from Turkey and I didn’t believe it could possibly be that dangerous,” she recounted, “I did a lot of research, read different stances on the conflicts occurring in the country, from various media outlets and then, once I was there, decided to create the page, À do Mundo, in order to demonstrate that Western media isn’t always completely right.”

For a week, Patricia participated in an exchange programme where several debates were held with people from all over the world, after that, she travelled on her own. She reminisces about a visit to a school while travelling solo in which she was received by the school’s headmaster: “There was quite a buzz when I arrived, I remember the children offering me pieces of paper, asking me questions and wanting autographs. I wondered why and then they said they had never seen a Portuguese person before. Some of these kids lived near the beach but had never seen the sea.” she recounted

The experience turned out to be incredibly positive, apart from one occasion where Patricia was confronted with a bombing near the station in which she was supposed to be dropped off. After travelling on her own for three days, she took a bus back to the airport. The journey was taking too long and she swiftly realised something was wrong. The bus stopped somewhere she was unable to identify and she was left alone, incapable of finding her way to the airport. Fortunately, she encountered kindness along the way: she met two girls who realised she was alone, took her to their home and let her stay the night.

“They didn’t know any English, we were using a translator to communicate, but they still treated me as if I were a member of the family. This shows how different the country actually is, in comparison with the stereotypes that are placed upon it.” 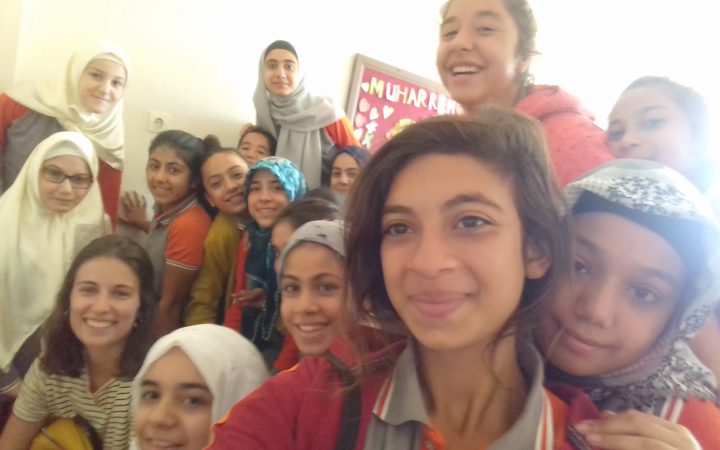 After she arrived from Turkey, she started planning her next trips. She wanted to continue her project and extend her explorations. There was far too much left to say. She then applied to intern in a project in Mozambique, for a marketing company and was accepted.

Once again, Patricia explained how she had heard, throughout her life, that Mozambique was a dangerous place and how everyone again told her not to go alone this time around. But she wanted to demystify these myths by herself.

“Mozambique wasn’t like that at all, and I wanted to keep showing that to people” explained Patricia. Nonetheless, although Patricia’s experiences regarding safety were, luckily, always positive, the concerns of those who worried about her were not without reason.

In December 2018, the brutal murder of Grace Millane, a British backpacker, who was visiting New Zealand, shocked the world and reminded us that a more globalised world also brings its dangers, especially as a young traveller.

“There are still a lot of issues when you’re a girl travelling. […] In order to stay safe, I make sure I know where I’m going, and which paths I’m going to take. You can’t just choose any path, you need to be careful,” said Patricia. 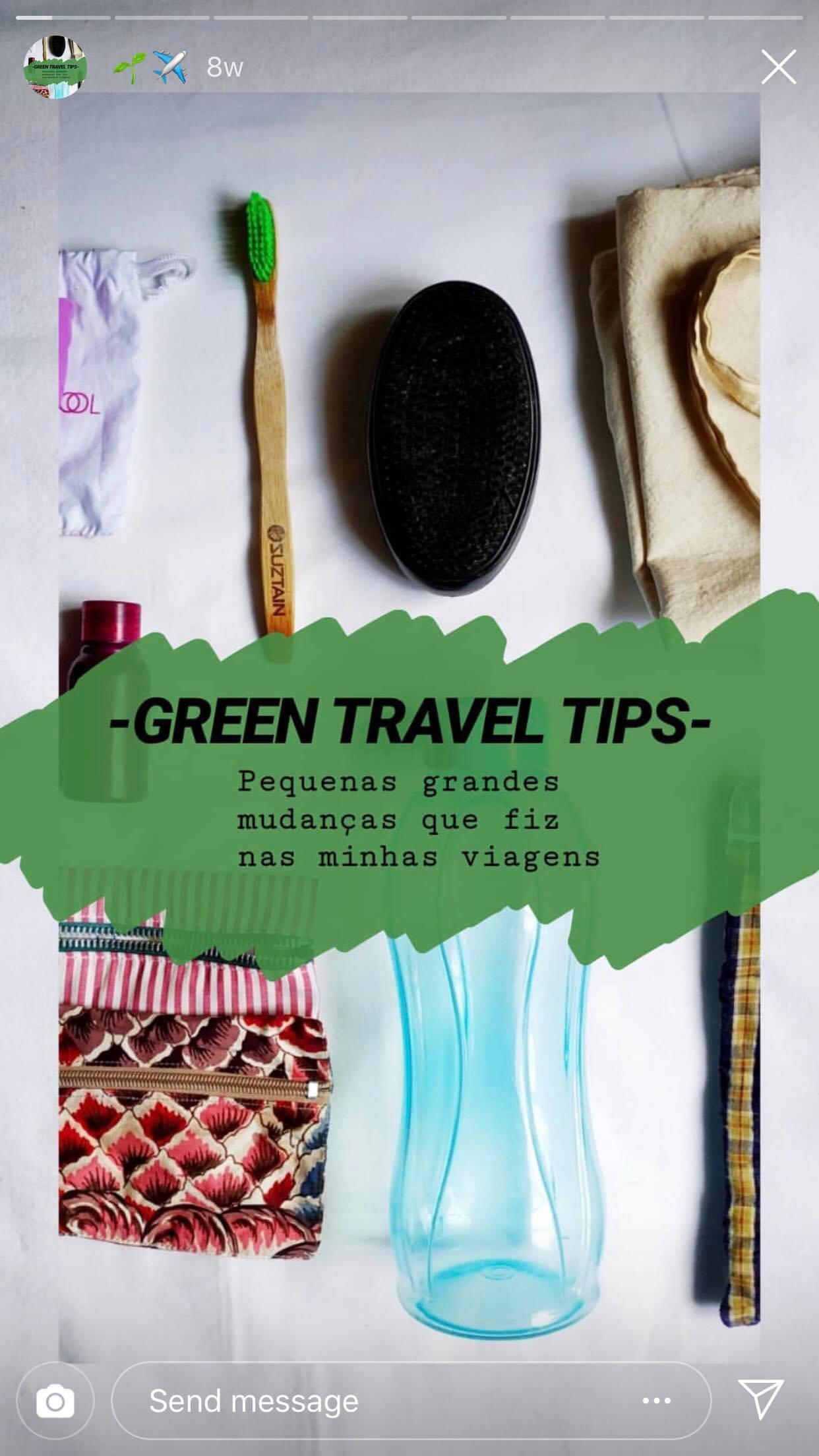 Patricia’s tips on how to travel ‘green’ are available on the project’s Instagram page. [Instagram:  À do mundo]

Since the À do Mundo project began she has now visited more than ten countries, from South Africa to Denmark, to Mozambique, amongst many others. Her reporting is raw and truthful, but also rather engaging and creative.

These are some of the characteristics that normally grip her readers: “When you write something and post it somewhere, it’s for someone to read, but I never thought it would have such a positive impact.”

“Readers say they like my writing and that sometimes they’re not expecting a country to be the way I reported it, or the way I experienced it. Sometimes I even end up debating several subjects with them, which makes me really happy,” Patricia tells me.

Alongside her Facebook page, Patricia has now created an Instagram account, in which she shares tips on being environmentally friendly whilst travelling and various reports on stories and people she finds interesting. The tips were very well received, and Patricia receives a lot of messages from curious followers who’d like to lead a more ‘green’ lifestyle.

Another myth Patricia wants to demystify is the idea that travelling is expensive. She believes that that’s what makes the majority of those who’d like to travel someday to give up on the idea, as they fear they won’t be able to afford it. Especially given the current traveller Youtuber/Instagrammer culture which has been spreading throughout the last few years.

“I don’t think travelling is expensive, you just need to grab the opportunities that come your way”, she explained. “Some Youtubers and Instagrammers tend to imply that to travel you need to stay at fancy hotels, eat at incredibly expensive restaurants, etc. […]  then they take pictures which are edited to the extreme to illustrate that lifestyle, and this ultimately ends up making travelling seem more expensive than it actually is.”

With her project, she hopes to change the perspective of those who read her work, step by step, whilst showing that travelling can open the minds and hearts of anyone who’s keen on exploring the dissonances the world can offer: “There are people who think differently than us, but that doesn’t mean they’re wrong, we can all coexist.”

“People always tell me, ‘Oh do you really think you’re going to change the world?’, but I think that by doing these things for myself, people will end up noticing. I’d never thought I’d have people following this project, listening to what I have to say, so maybe I’m already doing some good.”

All images courtesy of Patricia Nogueira.