Paris is, has been for a long time, and will continue to be, ( I suspect) a highly popular destination amongst travellers from all across the world. My boyfriend and I went for a long weekend to enjoy all Paris has to offer, but certainly, we went for the food. My boyfriend is a chef and had a long list of restaurants and bars he wanted to visit, and as a food enthusiast myself I was more than happy to base our trip around eating and drinking.

We spent our first lunchtime in a charming bistro, which happened to be close by when we began to get hungry, and it did not disappoint. Located on a quiet street lined with chocolatiers and designer boutiques, Le Rubis remains modest. Surprised to instantly get a table, the place was vibrant and warm, a nice contrast the cool January weather we had been exploring the city in. 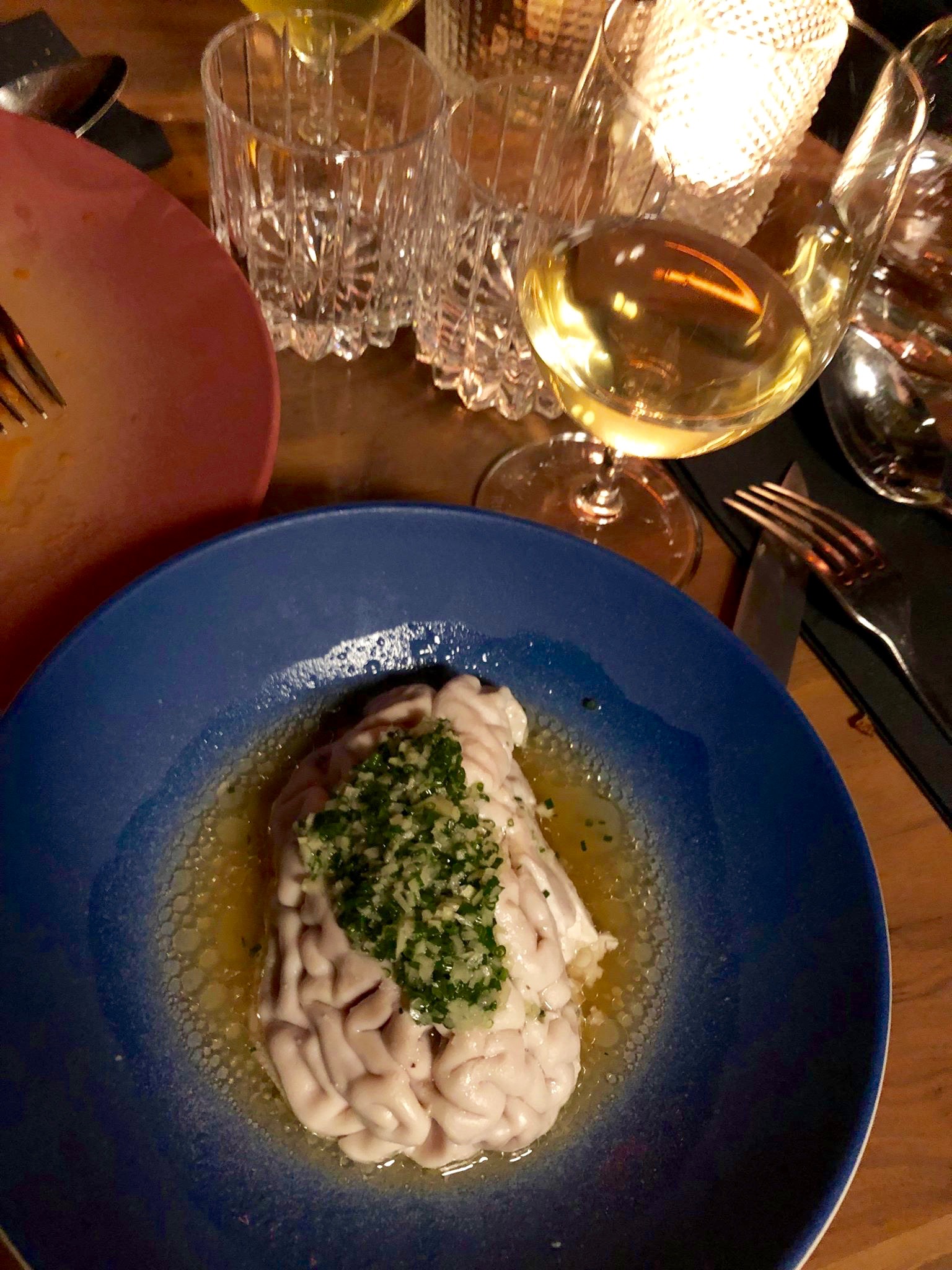 The restaurant was laid across two floors, the ground floor boasting a large zinc bar and a few tables, whilst upstairs felt more like a small bedroom covered in – what you might think if you weren’t in a charming Parisian restaurant, distasteful wallpaper. It is crammed full with tables, chairs and hungry diners drinking Le Rubis’ famous Brouilly.

Our charming waiter referred to me as “ma chérie” like a true Parisian man, and this added to the great convivial atmosphere. Outside were old wine barrels where the locals reconvened for a smoke and digestif after their meal.  The restaurant was filled with a predominantly male and French crowd, aside from a table of Americans and ourselves.

The food is classic French bistro food, comfortingly traditional, the equivalent to pie and mash in England. Everything was cooked to perfection and satisfied our cravings for some hearty red meat and garlic.

We started with escargots and the celeriac remoulade followed by the onglet, which came bleu, of course, with fried potatoes and oak leaf salad. For dessert, we had the very French Tarte Tatin, a sturdy pasty loaded with poached apples. The Bordeaux wine and the vibrant atmosphere made us almost forget it wasn’t served with creme fraîche. It was delicious, and the simplicity and understated approach to the food made Le Rubis my favourite meal of the trip.

Following a boozy afternoon, we headed down to Jones Cafe in the east of Paris, an area filled with bars and an atmospheric nightlife. This Neo-Bistro is modern, spread over a large spacious room surrounded by stripped back walls and marble tables. We arrived at 8 pm and the restaurant was bright and busy, with a young and trendy crowd. A mixture of dialects travelled across the room as the multicultural crowd enjoyed a Thursday night in Paris.

The pressed pigs head and cornichons were deliciously fatty, accompanied by bread from the Ten Bell’s bakery. This was followed by the quail’s hearts on focaccia bread served surrounded by a bright yellow melted Cafe de Paris butter; this dish was the real showstopper. We feasted on the Bonito (raw tuna), served with marinated carrots, dill emulsion and buckwheat, and a more classic herring and potato salad. 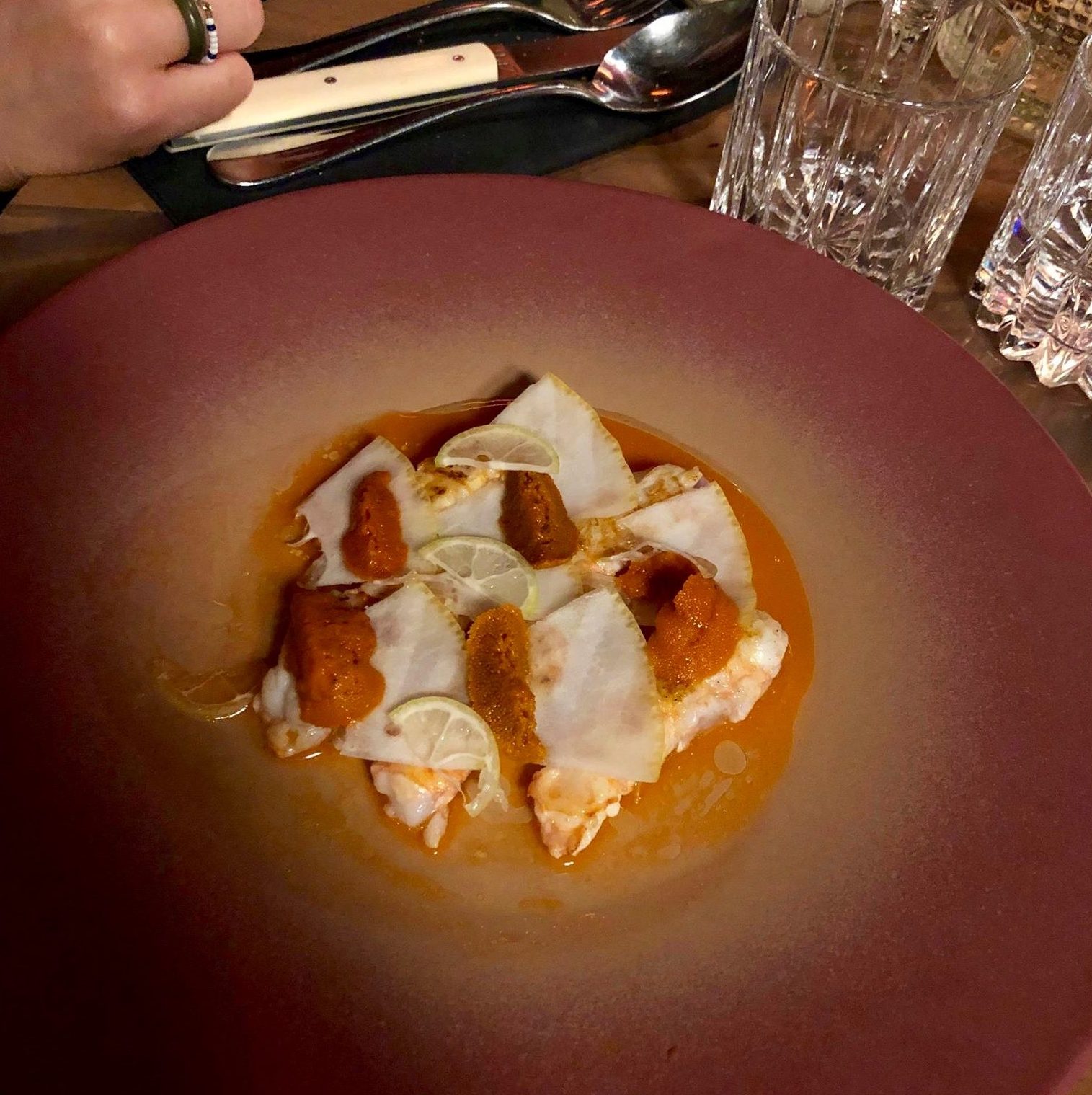 British head chef Harry Vidley paid homage to his time spent working in London’s St John Bread & Wine with his quails, buckwheat and bacon. My favourite, however, was the whole baked sole covered in mussels and dill. It was submerged in a sauce made from steamed mussel liquor, butter, white wine and lemon juice. We left the restaurant in high spirits: I would highly recommend visiting Jones Cafe for a lively evening in Paris.

The following evening was Friday night, and as we walked down the narrow streets towards the Clown Bar, we dodged people pouring out of fashion week celebrations.

We sat at a high table next to the bar (we booked through The Fork, which we found out does not specify seating) but it was a nice table nonetheless. It is a typical Belle Epoque bistro, with clowns painted on Sarreguemines ceramic tiles above the horse-shoe shaped zinc bar.

Situated next to the famous Cirque D’Hiver, the clown bar opened at the beginning of the 1900s and was a local spot for clowns to have a drink during their breaks. Having gone to dinner with this knowledge added to the excitement of the experience.

Since the Japanese chef, Sota Atsumi, took over the kitchen in 2014, the restaurant took off and became the Clown Bar as it’s known today. Atsumi comes from an impressive background having worked at Maison Troisgros in Roanne which boasts three Michelin stars and also spent time working at Vivant Table and Toyo, both in Paris. The menu is globally influenced, with European and Asian flavours. 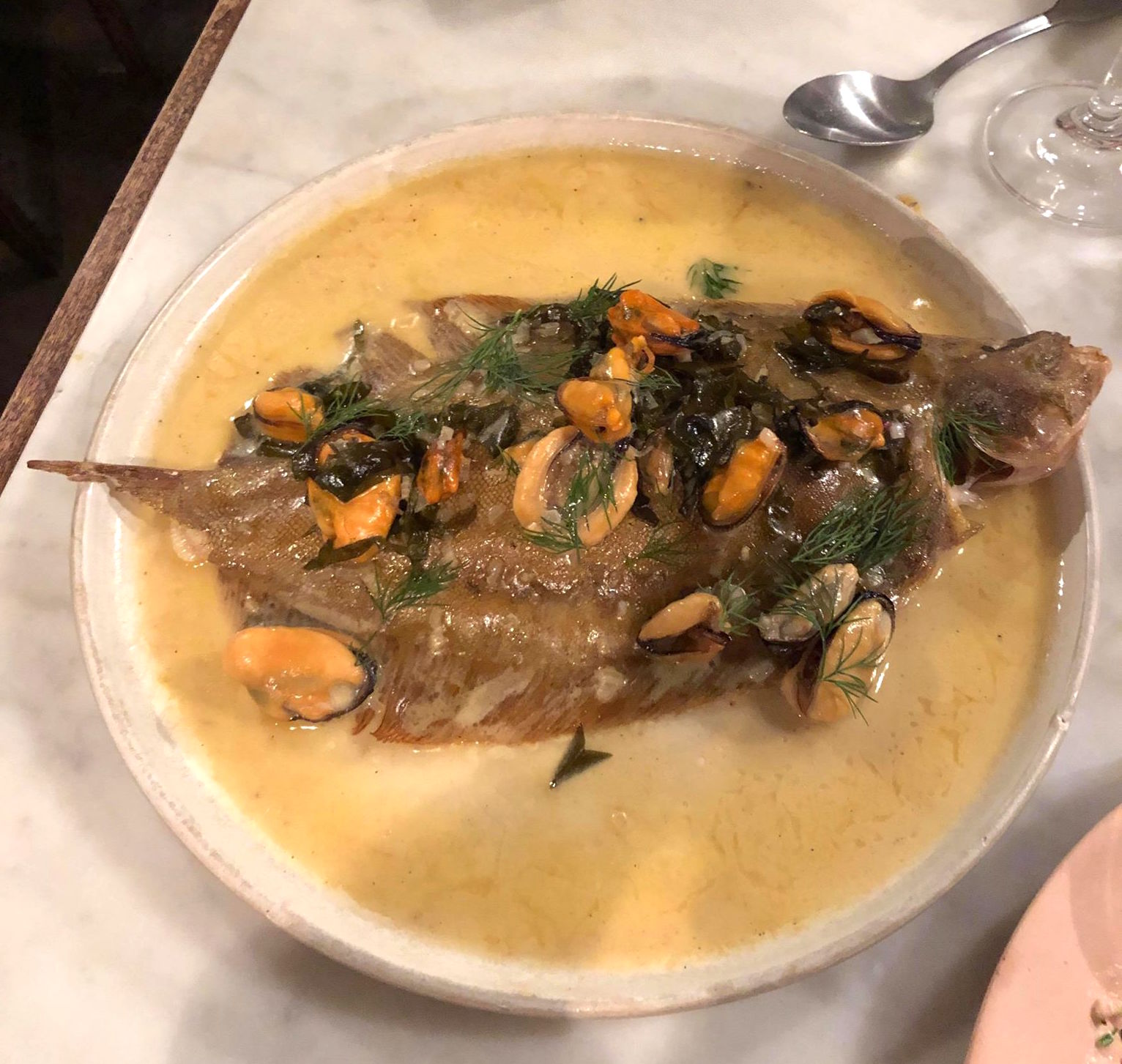 Baked sole with mussels and dill at Jones Cafe

The veal brains are what the Clown Bar is famous for, covered in garlic, parsley and tozasu, a Japanese fermented vinegar. This was the first time I had tried brains, and my first taste is most likely to remain the best of its kind.

The mackerel tempura, dyed black with cuttlefish was served with a piquillo pepper sauce, far less intimidating than the brains but still delicious.  We tried the langoustines with squash, sea urchin and yuzu, a tiny citrus fruit, which was beautifully presented.

For mains, we shared the duck and foie gras pie, a heavy dish for those with an appetite, and the pigeon which arrived with its feet sticking out the plate, served alongside Jerusalem artichoke and anchovies

I would recommend going to the clown bar, especially for the wine and brains, but be prepared for a more expensive meal. I would also recommend checking your bill before paying, as we noticed an extra 100€ worth of food had been added. As long as you have the time, as the service was rather slow, it is worth a visit.

Still full from the night before, we headed for our Saturday lunch at Le Bouillon Chartier, a large brasserie with mirrors plastered over the walls and an extensive menu. The tables are covered in paper tablecloths which is where the waiters (who, in most places seem to be men) write down your order in attempt to remember it all, a trait Le Bouillon Chartier is known for. 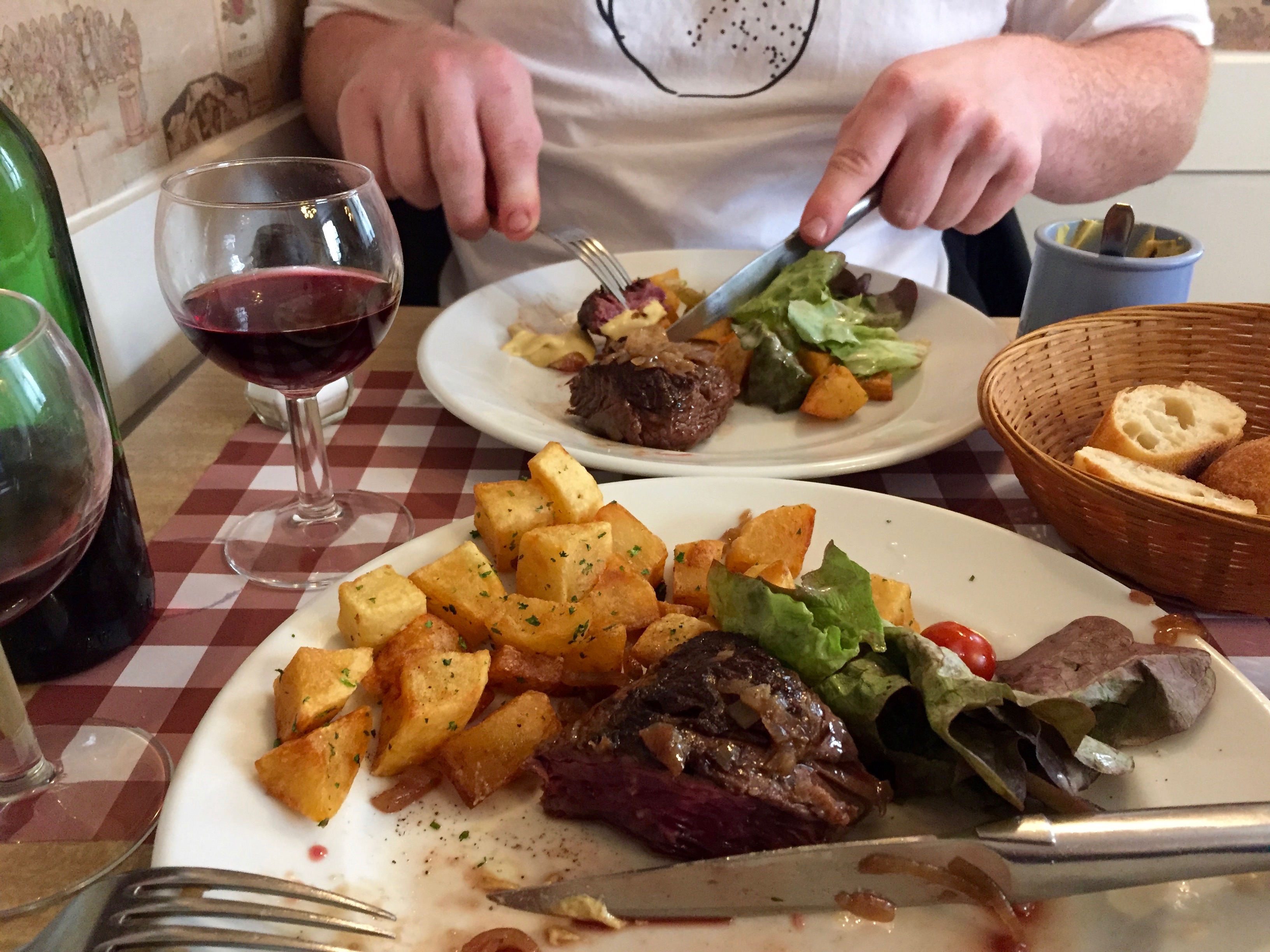 We arrived at 12:30, which I would strongly recommend as any later large queues begin to form outside, and on this occasion, the queues were under the rain.

The service is extremely quick, within fifteen minutes of ordering our foie gras, escargots and leeks in vinaigrette, we began to eat. This was followed with steak in pepper sauce with pomme-frites, finished off with a choux pastry dessert, and in a French style, a pear Calvados.

Le Bouillon Chartier is fun and cheap as far as Paris goes and is a great place to have a slow lunch and enjoy yourself without burning too bigger holes in your pockets. The food is okay, but that is not the reason why you should visit Le Bouillon Chartier. It’s a fun belle époque experience worth getting whilst in Paris!

Lastly, if you weren’t aware of this trick, I highly recommend it: before the start of any trip, add the locations of any places you have been recommended onto the Google maps app. This way, when you are walking around and find yourself wanting a drink or some lunch you can just look at your map, et voilà! You are a ten-minute walk away from that bistro your aunt Stella recommended.

All images were taken by Zillah Rauter

By Sophie Patrick
5 Mins read
An in-depth look at the 117th National Western Stock Show in Denver, Colorado, and at what makes this once-a-year event so special.
FoodNewsday

By Jayden Galata
4 Mins read
How the cost of living is affecting students across the UK and how they’ve been dealing with it.