Choose to rave your face off all night to absolute face melters, completely sober. Then eat, go home and sleep. Sober raving is on the rise in London, but the nights haven’t just been popular amongst health fanatics, or those doing Dry January, but also recovered drug addicts. For those who have had a problem, the inhibition-reducing effects of alcohol could leave  former addicts just a few steps away from a relapse, making nightclubs a high-risk environment.

“As an addict its very easy to convince yourself you are okay now and that’s what trips people up,” says Joe Hunter, a fully recovered heroin and crack addict from Leicester. After rehab, he didn’t want to put himself in a situation where he could be tempted to drink, so until he found out about sober raves, he just stayed in.

In his late teens, Joe began using party drugs. He’d go to house parties and take pills, like ecstasy, MDMA and base, like amphetamine. He’d sniff coke all night, and drink lager, spirits or anything he could get his hands on.

“I was terrible,” says Joe. “If I’d hear about a bad batch of pills, I’d start trying to find out who was selling them, so I could get really fucked up.”  Drug taking became a competition, back then he could never have imaged he would one day be tee-total.

“I deluded myself into thinking [heroin] was the answer and eventually crack came in, they sort of go hand in hand.”

When Joe was 22, his mind could no longer hack party drugs and he began to regularly suffer from drug-induced psychosis: “I’d hear voices, think I was being followed, I’d feel anxious, jealous and paranoid,” he says.

Joe felt like he was losing his mind, he was manic and erratic, but instead of stopping everything altogether, he began drinking heavily instead. With Joe having friends in the background that used harder drugs, the option to try heroin was always there. One day in an attempt to calm himself, he made that choice and tried it for the first time.

“It took all my emotions away, and was a cheaper alternative to alter the way I felt,” he explains. When he began using heroin regularly he felt less paranoid and anxious, and the voices were finally silenced.

“I deluded myself into thinking it [heroin] was the answer and eventually crack came in, they sort of go hand in hand,” remembers Joe, “but with the crack came the psychosis again.”

Thinking about a regular day like a crack and heroin user, Joe recalls waking up “in some weird position from where I’d slumped over, sat gouging out. I’d sit up, grab my pipe, scrape any crack residue out and smoke it, then smoke my heroin or toot any heroin I’d managed to save from before I gouged out.” 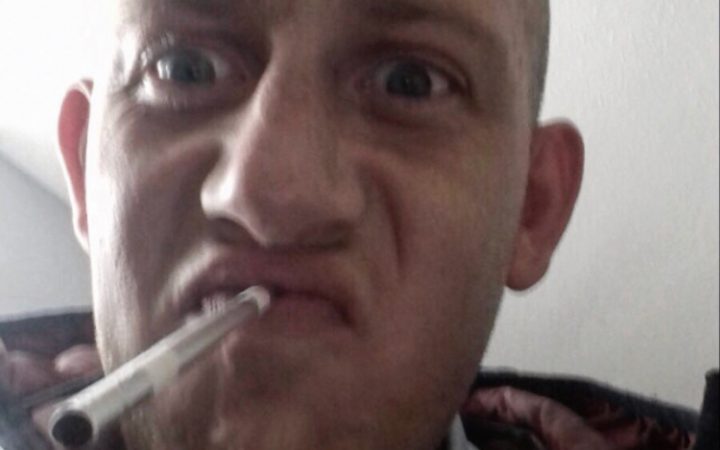 Joe with a “toot” – a strip of foil wrapped around a pen which is used to chase heroin with.

A soon as it had run out, Joe would find his mum and dad to emotionally blackmail them for money, he’d say he needed the cash so he didn’t have to steal from shops for it, but even if they gave it to him he  would still go out and rob them as well: “I’d then spend the whole day running from security guards, scoring and sitting in a crack dens.”

After many years hooked to these highly addictive, Class ‘A’ drugs, Joe was both mentally and physically broken. He was malnourished and a two-and-a-half stone (17kg) lighter than he is now. “I rarely ever brushed my teeth or had a wash, my addiction wanted me dead,” he says. “I know that now.” He also says that he feels God has restored him to sanity so that he can help other addicts that still suffer.

Joe is now 32 and twelve months recovered from addiction, raving at a sober night, hosted by a friend and another recovered addict. The rave is lit up with smiles, everyone dances confidently, while Joe looks a healthy kind of high. After hours of raving, he sits outside the venue, the sound of muffled music within contrasts with the village silence of Hemel Hempstead, his new home. He speaks of his recovery, and his first time sober raving. 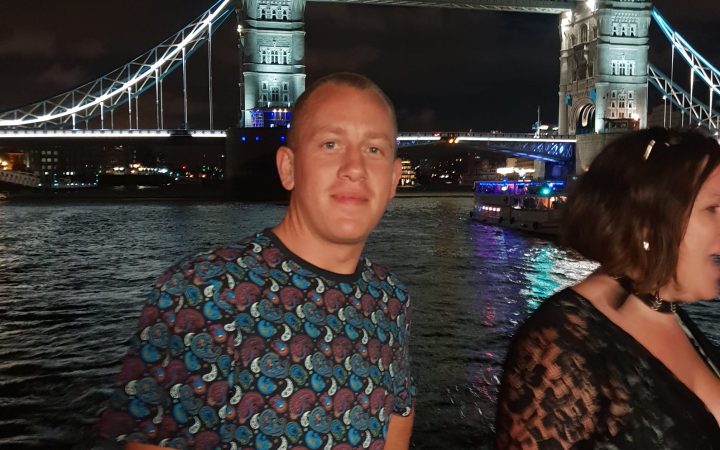 Joe after recovery, at the sober boat party on the Thames.

“It was really hard in treatment because surprisingly it wasn’t obsessing about the crack and heroin, it was more my head telling me to re-live my twenties and have a beer and go to festivals, take party drugs,” says Joe. “I was of the mindset that my life had come to a stand-still and that If I was abstinent from all drugs, especially party drugs I wouldn’t be able to have fun anymore and basically what was the point?.” Then one of his sponsees told him about a sober rave put on by Cocaine Anonymous.

“At my first sober raving, I was a little self-conscious because as an addict I still had that stupid feeling of self-importance and as if people were specifically looking at me,” he says. The more he went to these events the more he realised that no-one really cares and that he didn’t need drink and drugs to have fun or to dance. “Going on a sober boat party up the Thames, and being able to completely let go was a turning point in my recovery, I realised I can live without drink and drugs.”

After twelve months of rehabilitation, Joe has realised he doesn’t have to choose between a life of staying in and a life of going out and getting on it. Sober raves have given him the confidence and strength to rave sober at regular nights with drugs, drink, drunks and wreck-heads all around him. “I’m weird enough,” he says.

Scott Garby, from London who has been drug and alcohol-free for ten years, says he only goes out to sober raves because he prefers the atmosphere to regular nights.  He battled a crack addiction that began originally from taking coke after work or on nights out.

“I had a high-pressure job in banking, I eventually quit, maybe because of drugs but more because it was killing me. I got on a real low and started using crack, coke was too expensive as I was unemployed.”

He says his “rock bottom” was seeing his old colleagues outside a bar in central London where he was wandering around asking people for money for the bus. “I was sleeping on a mate’s sofa, I’d spent all my savings and I saw my old workmates. I tried to hide but I know they saw me, I just looked down at myself and my clothes and thought, how did I get to this?”

“Then at the end, we were just walking across a field chatting shit and it felt no different to when I was on it, to be fair.”

“I learnt through treatment that abstinence is the only way, Russell Brand will also tell ya that too,” says Scott. “After I recovered I tried a couple of the sober raves but they were like all yoga shit, with kids there, not what you want even if you are straight headed.”

He then came across a low key sober night set up by some older DJs. “Oh man, that was something else, just generally crazy weird people that weren’t on stuff, but through talking to people I realised most people there had done stuff at some point of there life,” he says. “There’s such a difference in people that have been straight all their life from those that have been completely off it and then sober.” 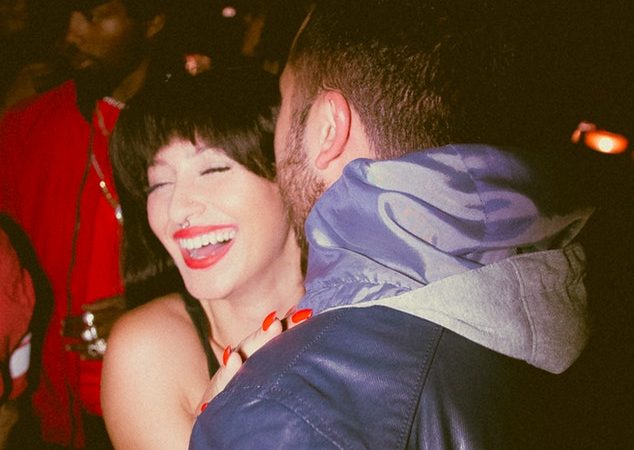 Sober raving or conscious clubbing is on the rise in London. [Photo by Frankie Cordoba]

The upsurge of sober raving in London means there are now many alternatives to clubbing. One of those alternatives is Morning Gloryville. It takes place in the morning and allows children with their parents. The event has had performances from DJ’s such as Basement Jaxx and Fat Boy Slim.

Other notable sober raves are We Are One designed by DJ/hypnotherapist Tom Fortes Mayer and Urubu’s Ecstatic dance, which is advertised as meditation through movement.

To get a real rave feel, however, the semi-illegal or private raves set up by old-schoolers and ex-addicts are the places to be. Scott recalls an enlightening moment was when he raved all night in a forest in Cockfosters and watched the sun come up.

“The sleep deprivation will get you tripping out, alongside the acid house, and jungle techno,” he says. “Then at the end, we were just walking across a field chatting shit and it felt no different to when I was on it to be fair, drugs just give you permission to let loose, I don’t need permission.”

The sound system rolls. The stars beam. Wide eyes, and big smiles. Everyone, already off their face on the raw sobriety, like a child. There is no waiting for your drugs and drink to kick in. This is who you are, so dance. In a vulnerable, uncomfortable state, you’ll stomp through it. People hugging and shit, the same old smoking roll-ups and girls doing their lippy, lads mc-ing in each other ears over the DNB. The tune drops, you will come up. Everyone skanks [dances] out to the same old bass, with melodies, you never heard when your blood was laced.