A short walk from London’s Old Street Underground station, hidden away in blocks of council houses, is what appears to be your average neighbourhood pub, the Lion and Lamb.

Located on the corner at the end of Fanshaw Street, not a single sound can be heard. However, as you open the two waist-high wooden doors and walk the few steps to the pub’s door, then add a few more to enter through a second door, you’ve left London.

The small room is filled with a pleasurable atmosphere, tainted with blue and red lights which are accompanied by a ceiling covered with headphone jacks.

All around, people are dancing and mingling to a continuous variety of beats. These beats are being performed by a line-up of DJs from the music label, Sentaku.

Founders Josh Rawl and Massaï aren’t putting on a party or an event. This is an experience. As you soak in the electric energy brought to you by the range of different music styles, you aren’t just experimenting music, but pure art.

Artefact was invited to an event which introduced us to this two year-old universe. Their events take place approximately every couple of months with a thought-out curation. Whether it’s in the music, the venue or the artistic experience, you will want to embrace it. The Lion and Lamb became a home for the label which organises events in London and Paris. 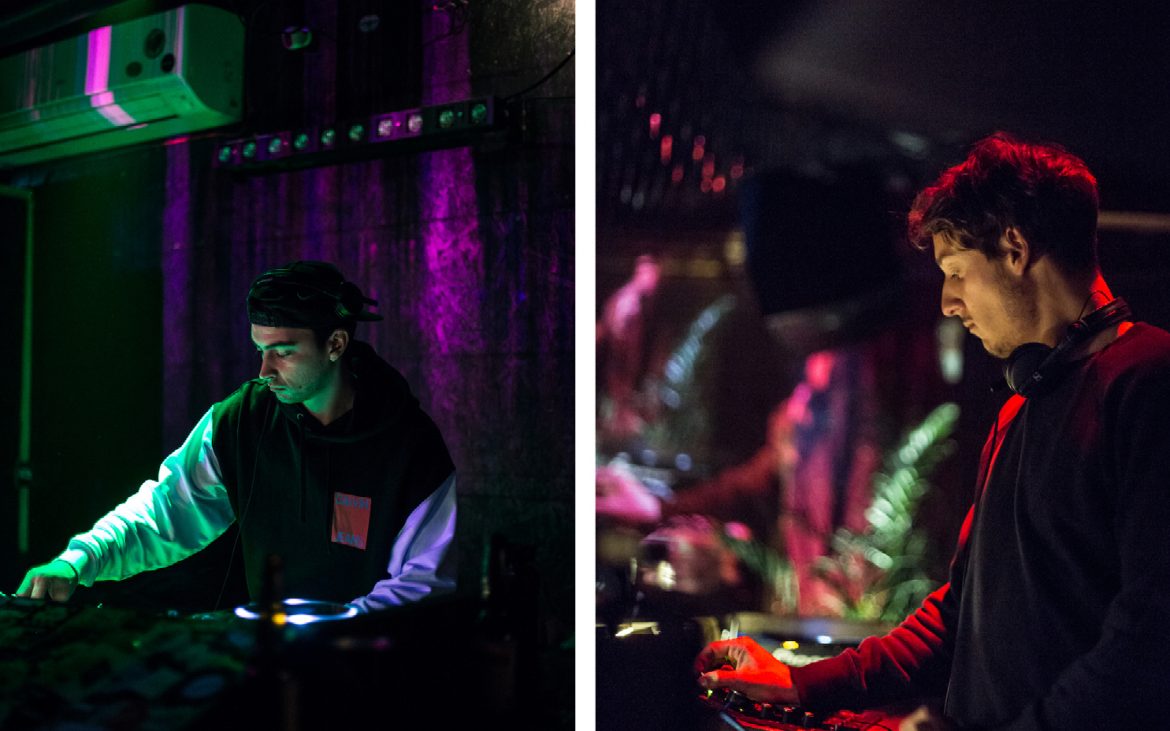 The line-up included French-American Pablo K. and his vibrant, rhythmic tunes, Dandeloo and his expedition in a mix between new wave and old progressive house filled with deep, acid and electro touches. Following that, a set from two of the music label’s resident DJs, the evening continued with performance from co-founder, Massaï who describes himself as a “a solar and warm person.” His love for the sun can be heard and felt in his rather colourful sound.

Co-founder Josh Rawl closed the evening show with an endless range of house, progressive and deep house from our beloved 90s. His set was filled with light, trance-like vibes and did include sliding Run DMC’s Ghostbusters in his mix. Throughout each of the performances, both the crowd and the DJs were taking part in a live video installation.

It was designed and executed by JXQ, who describes herself as an “ABC who grew up in Hong Kong”. During the event, with a small camera taped near the turntables, the artist was projecting live a somewhat distorted video of the Sentaku experience.

The colourful video was still clear enough for you to be able to recognise yourself and the familiar faces around you. With a growing interest in experimenting with live installations and interactive visuals, JXQ told us: “It’s something that I’ve only really started to get into the last year and Sentaku really gave me a total blank slate.”

The visual artist describes how her main source of inspiration comes from music and the moods music can create. “Concepts to me are defined through a very abstract feeling of a certain ambiance that can only be explained through the use of colours and sounds,” explains JXQ.

With a background in fashion and e-commerce, the artist had already been working with Josh Rawl and Massaï, with whom she established a great working relationship way before the birth of Sentaku.

Josh Rawl and Massaï described how essential JXQ was in the creation of the label: “Jane was with us since the beginning, she literally shaped our brand image, she does all the graphics from artworks to flyers. When Sentaku was being created, we insisted that our visual aspect had to be as important as our sound and we couldn’t think of anybody else to work with but her.”

As they both laughed and stated how impossible it is for them to forget how they met, Massaï started narrating the story. “At the time we were all living [with] our parents and we were all neighbours, I met Josh at a party at our friend Halpern’s place.” While they were exchanging music, a six year-long (to date) friendship was forged. 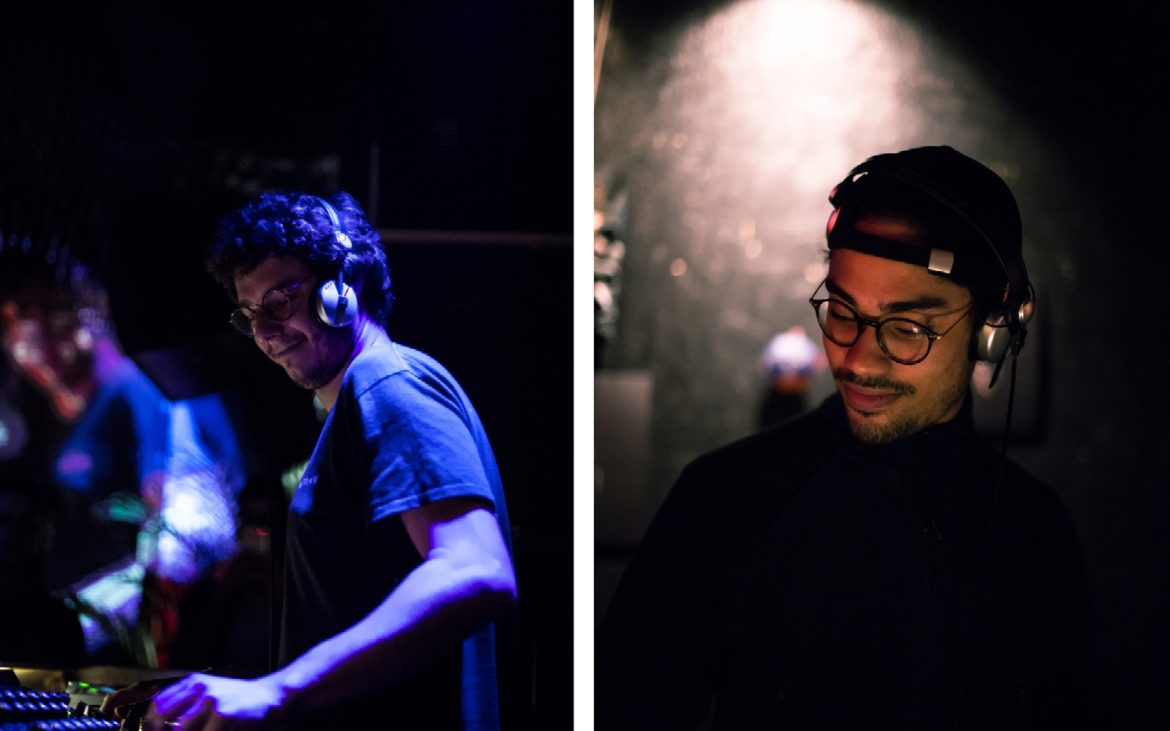 Josh Rawl and Massaï at the Lion and Lamb [Amalia Navarro]

Before there was Sentaku, the two were resident DJs at Hackney Wick’s Number 90 for their own night called Canal Sessions. “Our Sentaku project is the most serious and meaningful project we’ve ever engaged in. It really reinforced our friendship as we’re always pushing each other to our maximum potential, a bit like the Yin & Yang,” explains Josh Rawl.

The symbolic meaning behind the Chinese symbol of opposites attracting represents the essence of the label. In its creation, opposites were attracted to each other in London. This idea has also been visually represented through their logo which Josh Rawl described as “an opposition of two forces creating a perfect harmony when meeting each other.”

Born and raised in Paris of Brazilian and Togolese descent, Massaï fully relocated for some time to London, in pursuit of a BA in Arts Management.

The DJ now lives in Paris for his career as a booker of electronic music artist for entertainment developer, Lola ED. His co-founder, who is half-French, half-Australian of Jewish descent grew up in Hong Kong. His degree in business is what pushed him to relocate as well back in 2012 and he simply stayed much longer than he expected.

“Sentaku means selection in Japanese. We used that as a way to show that selection of the very best things in life can amount to perfection,” described Josh Rawl.

From the name to the branding of the label, the inspiration has been deeply sourced in the Japanese culture and especially the Edo period. Also known as the Tokugawa period, it lasted from 1603 till 1868.

Their graphic designer, JXQ, explained how the founders not only draw inspiration from Japan-based artists but also how they believe that Japanese culture and media is the most recognisable across the globe. 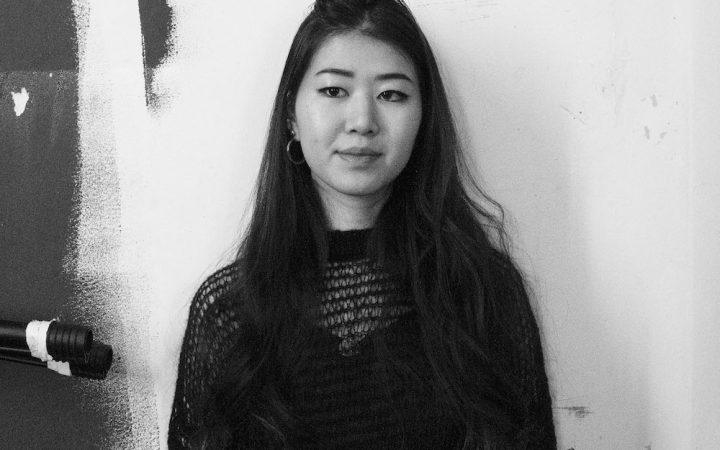 “Manga, ninjas, the temples and neon lights of Tokyo are staple visual references that anyone from anywhere can recognise. Japan is also known for being extremely traditional whilst being one of the most technologically advanced societies today,” JXQ told us. The label’s branding is composed of a balance between traditional Japanese imagery and its incorporation with digital manipulation.

The label’s visual and musical identity have strongly been represented in their vinyl releases particularly which are the only medium produced by them. “It’s not that we’re closed to digital music, on the contrary we dig tons of it daily, but we are vinyl diggers and collectors and its warmth is definitely incomparable to digital. The satisfaction and feeling of holding and playing a physical object with the sound engraved on it is just so special,” Josh Rawl said.

Two records have been released until now, with another in the works, Araki Murashige and Hattori Hanzo. Each pieces of wax have been created by friends or producers within the founders’ circle of friends. The first four-track record was created Dixia Strong, an Asia-based duo exploring minimal and tech house sonorities. Massaï described the first Sentaku release as a “very interesting and solid four tracker, full of pads and melody inspired by Japan, it is an ode to bounciness.”

Araki Murashige was considered one of the first samurai in Edo history which represents this devotion which drives the samurai’s life. The founders deeply felt that it resembled their passion for music. Their second release was named after a ninja, Hattori Hanzo, famous for his sword (great for Kill Bill fans out there).

Massaï states how “the goal of this release was to create something open with different influence within electronic music but also work with friends and talent we believe in and create connections between them”. It was achieved by a group of artists based around the globe. From French producers based in Marseille called DRMC (Def Raw Music Concept), the Swede, Per Hammar, the Argentinian pair Bolder and Saenz and the Paris-based Moroccan, Bassam.

If Sentaku and its universe were to be summed up in a few words, they would be: family, eclectic, welcoming, harmonious, diverse and communal.

Sentaku is a community that is a source of inspiration for the founders of the music label to pursue new endeavours. The imprint collaborated with one of Massaï’s childhood friends who created an eco-friendly brand called Paradisien.

The brand builds different collections based on different continents. So when an Asian collaboration came in fruition, JXQ designed the collection, which was then produced using Japanese inspired visuals.

Sentaku is a welcoming, diverse family, with a team from different geographical backgrounds; France, United States, Australia, China, Brazil and Togo. Their values and roots are at the core of the Sentaku, which led to these people coming together and forming a new-found family. Pablo K. and Dandeloo, two of the label’s resident DJs expressed how this family came from a place of friendship. With the birth of this Japanese-inspired project, both were invited to join the adventure.

“Massaï is a part of a big family of friends here in Paris, that we both know for almost ten years now. We actually played some records together and something felt right,” says Pablo K., explaining how he joined Sentaku a year ago.

Dandeloo explains how “it has never been a doubt for me that I would join the team. As soon as they asked me, I accepted it. I joined Sentaku before it was even launched publicly which I will always be grateful for.”

Some of their other resident DJs include the duo behind the first Sentaku vinyl release, Dixia Strong. As for Dandeloo, they were the very first residents. “There’s no necessary criteria apart from being an excellent beat-matcher, an excellent digger and an excellent human,” pronounces Josh Rawl.

Sentaku brought together different influences and musical styles. Sentaku is a family in the sense that they all respect and simply love each other and their styles. As the Yin and Yang as a very strong symbol for this family, what attracted all these opposites together is their passion for music. At the end of the day, it all comes down to supporting and working together to create this unique blend of styles where creative strives.

Whether it is at Josh Rawl’s set up at home which also known as his spaceship or at the Lion and Lamb, witnessing this overwhelmingly and positive explosiveness of all their different genres colliding in their line-up of sets, is an experience to savour.

“Sentaku is a vibe, a family wanting to expand and reach your hearts and ears. Our touch has the incentive to remain sharp and ethereal, variant with life,” pronounces Pablo K. So if curiosity has awakened your heart or your sense of sound, invite the different sounds and allow yourself to be open for this artistic revelation.

Each of the people mentioned and/or interviewed in this piece are referred to by their stage name.