Aldous Huxley described the dystopian genre as “the most accurate way in criticising modern society”. It is no surprise that classic dystopian novels have seen a huge spike in sales in the past few years, following turbulent politics in the Western world.

The BBC reported that sales of Orwell’s Nineteen Eighty-Four have increased by 9,500% since Donald Trump’s inauguration and in the same year as the UK’s European Referendum, sales increased by 20% in the UK.

The Dystopian genre has existed for centuries. Appearing to first question utopian ideals, it tells stories of ideologies to the extreme.

Brave New World, which moved into the top 10 Amazon sales charts in light of the inauguration of Trump, is set in 2540, depicting a world where the population is willing slaves to totalitarianism, kept docile and compliant by drugs, constant entertainment, technology and a plethora of material goods.

“A really efficient totalitarian state would be one in which the all-powerful executive of political bosses and their army of managers control a population of slaves who do not have to be coerced because they love their servitude,” wrote Huxley in 1932. Since the novel was written in a time of sexual liberation, he was commenting on this societal change.

Casey Schmitt is Assistant Professor of Communication Studies at Gonzaga University and author of Scapegoat Ecology: Blame, Exoneration, and an Emergent Genre in Environmentalist Discourse: “The common factor in audience attraction to dystopia is change. Dystopia stories seem to pop up during moments and periods of swift or stunning change in a community. People can no longer reliably count on the world remains more or less stable, and more or less similar to the world in which their parents and grandparents had lived.”

[pullquote align=”right”]“It allows space to reckon with the changes and choices society has already made for its own future, and the mix of excitement and terror, the uncertainty, they entail”
– Casey Schmitt[/pullquote]In a time when we are waking up to news articles urging us to “stockpile for a no deal Brexit,” there is no wonder there has been a rise in attraction to dystopian literature and media. Schmitt explains that “they first popped up in mass in the global West during the Industrial Revolution”.

This period marked a change in generational experience of the world, its make-up, its rules, and the people in it. For many, it was the first time that people would see such radical social, political, and technological changes over the course of a single lifetime.

A correlation between societal change and attraction to dystopian literature and media is clear. The popularity of Charlie Booker’s television series, Black Mirror, has to lead to an interactive Netflix film, Bandersnatch.

The film, set in 1984, sees a young programmer begins to question reality as he adapts a fantasy novel into a video game. Viewers are invited to choose the narrative of the film, resulting in alternative outcomes and endings. Filmmaker and screenwriter Jack Deslandes says, “the extremes of the series and film show Booker’s neurosis about modern technology come to life.”

Then there’s the 2018 film Ready Player One, based on the book published in 2012, was significant as critics reviewed it as an accurate prediction of the near future.

This film depicts a society where people spend the majority of their time wearing Virtual Reality headsets, interacting in a digital world called the Oasis. Joel Breton, general manager of Vive Studios told Forbes: “I think that we are about seven to ten years away from deploying the technology enjoyed in The Oasis as described in the story and shown in the film.” 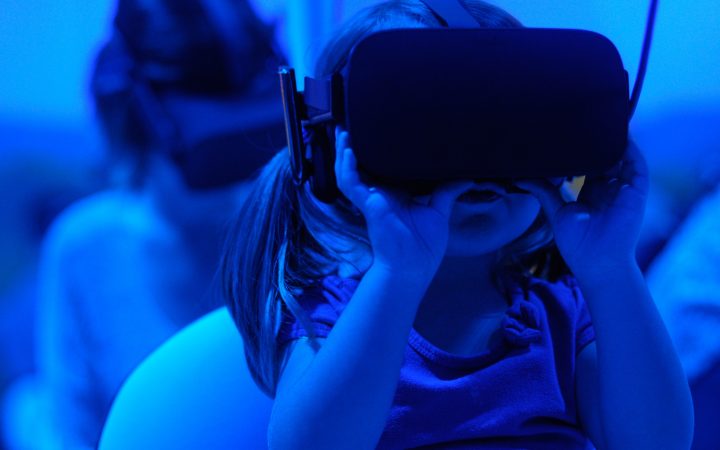 Virtual Reality is growing, is Player One ready? [Unsplash:Giu Vicente]

In light of this, it is apparent that contemporary dystopian works cater to a younger audience. Since the 1990s, young adult literature and film in this genre has been on the rise.

Schmitt explains why this may be: “So many popular young adult novels these days are set in dystopia suggests that perhaps the young people of the past decade are less hopeful about what the world they inherit will be like, less likely to believe in the myth of progress than previous generations of the global West in the last century.”

Recent events suggest that Schmitt’s theory is correct. Children in Belgium are skipping school in favour of protesting for action against climate change. The gap between our reality and dystopian novels seems to be closing in the eyes of political protesters. Last year, women’s rights campaigners dressed as handmaids, a nod to Margaret Atwood’s 1985 novel, The Handmaid’s Tale which was adapted into a film and then a TV series in 2017. They showed their objection about having a conservative majority in the United States Supreme Court, which put women’s abortion rights at risk.

It seems odd that in times of uncertainty, we seek to immerse ourselves in yet more doom and gloom. The psychology behind our interest in formidable alternative realities has been widely speculated. “I think such stories allow readers to engage the fear in order to develop comfort–to play with their deepest darkest anxieties through the imagined world of unknown adventures and struggles from the safety of a world they already do know and navigate,” Schmitt said.

“It allows a space to reckon with the changes and choices society has already made for its own future, and the mix of excitement and terror, the uncertainty, they entail we can realise and grapple with fears and anxieties about growing older, technology, health, politics, environmental threats, and any number of other things without actually putting ourselves in those worst-case scenarios”.

This can be cathartic, but it can also help audiences think through worst case scenarios and plan for their personal and collective futures, giving them confidence for potential challenges ahead.

[pullquote align=”right”]“They allow audiences to engage and experiences their fears and anxieties in vivid detail, but also from a safe distance”
– Casey Schmitt[/pullquote]In terms of the changes happening in the contemporary western world, imagining the different scenarios can be a coping mechanism. Schmitt tells us: “In a changing world the future is defined by uncertainty. In times of change, our narratives question whether those changes, already in play, already in motion, are good or bad”. Whether our concerns are Brexit, Trump, or climate change, imagining a worst-case scenario can help you feel prepared.”

Mark Deakin regularly discusses dystopian literature and film on chat forums and offers his view on why we hold a fascination for dark worlds: “Dystopian novels lend themselves really well to social critique since they allow one specific aspect of a society to be isolated and magnified until its problems become obvious”.

This is his favourite aspect of the dystopian genre: “The comparison of today’s society and similarities to these novels is very interesting but it’s also sad how authors such as Orwell have predicted many societal regimes.” He refers to George Orwell’s Nineteen Eighty-Four, set in a world where most of the population have become victims of perpetual war, omnipresent government surveillance and propaganda. 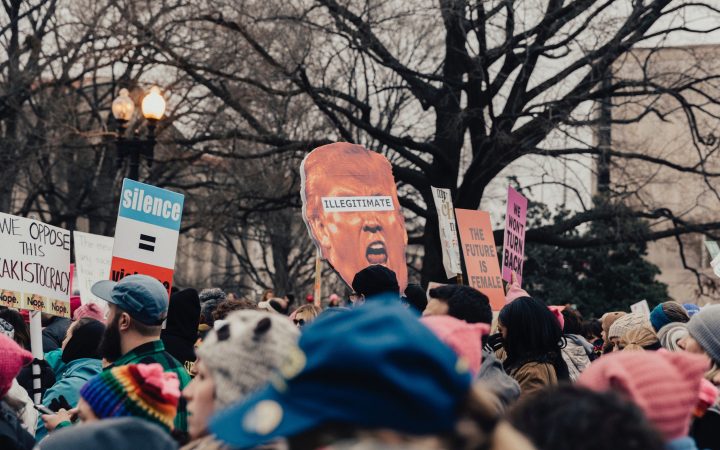 The recently published Vox arguably predicts the worst case scenario of President Trump’s policies. In Christina Dalchers’ novel, the American government has limited women’s rights so severely that they are restrained to speak only 100 words a day.

Dalcher indirectly criticises Trump’s threats of building a wall to border the United States. It flips its purpose by using it to keep US residents inside the country rather than Trump’s intentions to prevent people from migrating in. Dalcher writes: “It didn’t take long for the authorities to set up checkpoints, and the wall separating Southern California, Arizona, New Mexico, and Texas from Mexico itself had already been built, so the egress stopped fairly quickly.”

Deakin adds to this, quoting one of his favourite authors, Aldous Huxley: “dystopian narratives are “historically the most accurate way in criticising modern society.”

This is true when considering the many forms dystopian narratives come in. Schmitt says: “Zombies are so popular in current media, suggesting the genre is a commentary on consumer and capitalist cultures. Dystopian stories about artificial intelligence and robots conquering people show anxieties about the growth of computer technology and the changes it portends.”

What all these narratives have in common is outlined by Schmitt, “One, a broken or fallen world, likely corrupted by its own indulgences (consumption, capitalism, political hubris in attempting to structure the world, etc.), and two, a core character or protagonist, often from humble beginnings, that rejects the systems of the dystopia (i.e. rejects caste systems, fights against computer overlords, discovers and champions lost traditions or knowledge from the past, etc.)”

There is a structure to these stories that suggest we’ve created them to act as a coping mechanism.

The most recent spike in dystopian literature and media is different from its classical counterparts. Modern film and literature of the genre are often franchises, coming in parts of three or more books and films; The Hunger Games, Divergent, and The Purge, to name a few. The idea of dystopian “franchises” is a notable one. The celebrated canon of dystopian literature-including things like Nineteen Eighty-Four, Brave New World, The Road, Children of Men is full of single-shot stories, without explicit franchise sequels or franchises.

The dystopian conclusion is often crushingly dismal or, at the least, ambiguous, even when hopeful. The idea that the heroes’ lives and adventures continue book after book, film after film, suggests that the dystopia is not quite as dystopian as it might be.

“The dystopia franchise is a somewhat new phenomenon, set in a world where things don’t necessarily get better but where there is always hope for improvement and, at the very least, an  indomitable spirit of perseverance,” Schmitt explains. 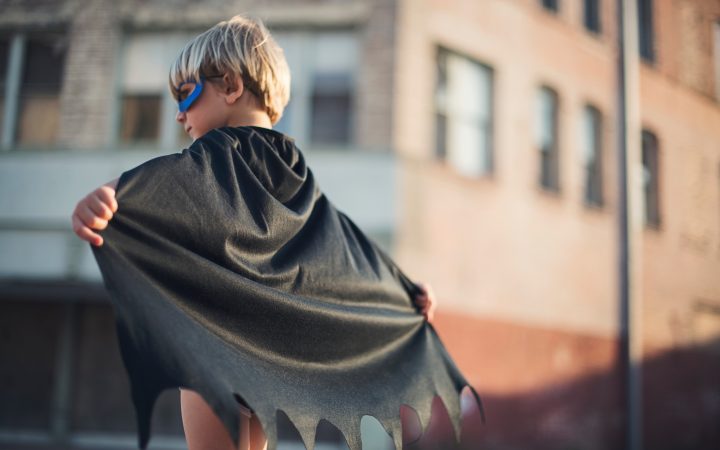 Christian Holub, a writer for Entertainment Weekly, suggests this new spike is actually pushing people towards activism. Also commenting on the heroes of modern dystopian literature, he believes they are different from those we see in the classical literature.

He spoke to Bryan Samsone, manager of BookPeople, who said: “These classic dystopian books are actually leading people to buy books in our activism section. Now we have a big display on Fight the Power and Resist kind of thing. It’s taken people from going, ‘Okay, we know we’re in this dystopian frightening world,’ to going ‘Okay, what do we do about it?’ We’re seeing a lot of sales going to our activism/politics section.”

Modern dystopian literature and film parallel political activism in our reality. Dalcher subliminally urges her readers to take action while we still have time through the thoughts of her protagonist Jean McClellan: “Think about what you need to do to stay free. Well, doing more than fuck all might have been a good place to start.”