From her flat in Bristol, Jenna Hughes, the mastermind behind Nebbity Clothing, finds her days and nights intertwining.

Since its launch in early 2017, Jenna has seen her handmade garment business excel beyond any of her expectations and goals, after beginning its days on clothing and accessories app Depop.

“The Depop community are all about bargains and getting everything at the lowest price possible, which becomes very competitive,” she says of her decision to create her own website www.nebbity.com in December 2017. “My stuff is about being a little different, as it is handmade and ethically made and not about the cheap, fast fashion.” 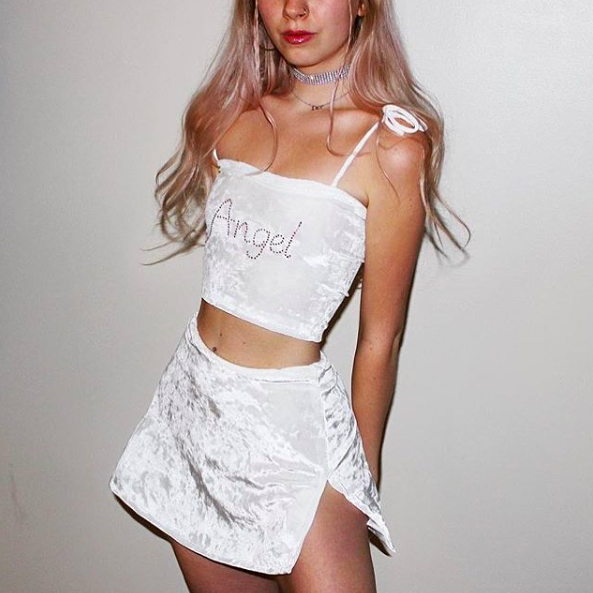 Although the app has more than 10 million users and has become a pinnacle in the creation of small businesses, Jenna chose to leave after she began to feel some were undercutting one another and taking away from the budding and growing community vibe. “There are a lot of girls on Depop making handmade clothing and selling it cheaper and cheaper, which is why I wanted to move to my own website,” she says.

“My designs are my own, and I think of everything myself, which includes finding the fabrics, and this isn’t considered by other users who will happily see my designs and create their own dupe” she continues. The independent switch to her own site enabled Nebbity to become a more professional business, allowing for customisation of items and ending the famous price bartering that occurs on the Depop app.

Initially, Jenna’s move from London to Bristol was to study photography at university, yet she found the course dull and repetitive, lacking difference from what she learned at GCSE level. “I started focusing my time on making clothes and let my course slip” she reflects. “Halfway through my second year, I was finding it hard to even go into university as all I wanted to do was make new clothes”. This ultimately led to her dropping out after beginning to struggle with the time management, which she took as a sign that her passion lay stronger with creating clothes. “I tried to switch to the fashion course, but the leader decided I couldn’t, so I didn’t go back to university after that. It’s left me feeling that art courses are a scam.”

Nebbity was born from Jenna’s frustrations when shopping on the High Street. “I couldn’t find what I wanted to wear as the sizing was off in a lot of the places I shopped at,” she says. “The sizes never seemed to go small enough, or the waist was just always too big, so I began making things for myself.”

Soon enough requests for her fun and handmade clothes started rolling in from her friends, and Jenna found her skills flourishing. “When I had finished wearing the items I had made, I would sell it on my Depop. This led to a girl asking me if I could remake something I’d sold, and after that, I began making my own clothes to sell.”

Nebbity prides itself for its handmade garments, but this can become testing and time consuming when operating solo. “Sometimes I love it, and sometimes I hate it,” she says of the challenge. “Forcing myself to actually make things when I’m not in the mood can be quite hard. Recently, as I’ve been getting more orders in, I am in a routine and getting it done.”

In the initial start-up, Jenna found a bulk of her orders came in on payday, which she would procrastinate completing. “It became very daunting, but it was also all very new to me. I have found that I can either do none of it or all of it. My working days go from zero to 16 hours as I have never been very good at time management.” 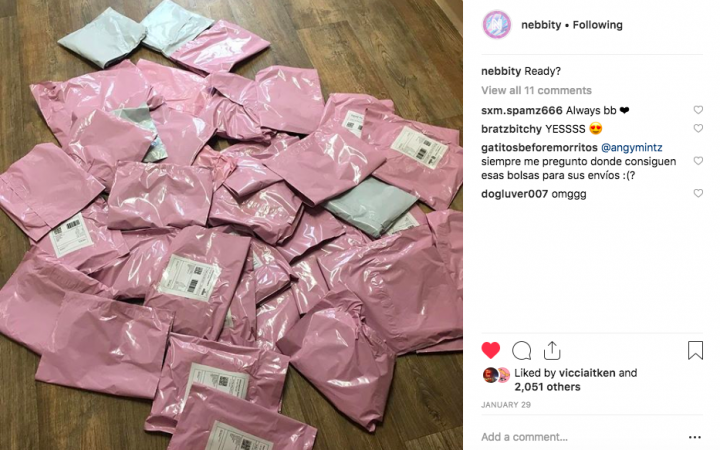 Recently, Nebbity has seen a growing demand for their handmade garments. [Instagram: @nebbity]

It is easy to forget that Jenna is only 21 years old as her brand goes international, which she credits her Instagram presence for. Recently, popular influencers such as @jadej4de, who is based in America and has over 54,000 followers, have tagged Nebbity in their own purchases. “I stopped sending my clothes out to influencers because they just don’t do anything,” she says.

“They think they can go to these small brands who are really trying to get out there and abuse their power. I gifted to a girl called douxfairy as she asked for a full outfit, and we agreed I could use it for a stock photo. She posted a photo where you couldn’t even see the outfit and tagged me in the make-up, but the caption for the image was an advertisement for eyelashes. When I approached her about how she’d scammed me, she told me that was just what I get, so it’s nice to see my brand reaching influencers through their own purchases.” 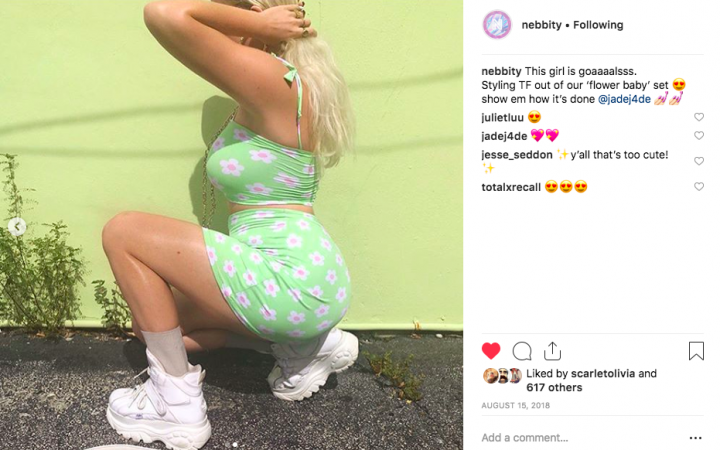 With her own account currently boasting 26,800 followers, Instagram is a key platform for Jenna to interact with her customers, and she regularly reposts her customer’s photos and comments on their posts.

“It’s important to stay active on Instagram, so people feel included. If they follow everything you do and like what you post, then they feel included in the brand as a whole, and not just the clothes” Jenna says. “I think it makes them want to have the whole collection rather than just one item as they get excited for the next thing coming, and that increases sales.”

For Jenna, Nebbity created a growth in her own independence and confidence. “I feel like I am actually doing something right because of my customers. The feedback I get from them, or even just from people who comment and message me on Instagram, is like having a bunch of strangers just gassing you up all day.” It is a fearlessness she hopes her customers feel when they wear her clothing, embracing the uniqueness and individuality that her brand encourages.

“I want my customers to feel as if they can wear what the fuck they want when they want. Whether you’re pink, glittery and girlie all year round or just on an occasion, you shouldn’t care what people think,” she says.

“I went into a dingy pub dressed in pastels and glitter, and overheard a woman saying ‘what the fuck is she wearing’. I just thought to myself, at least I’m brightening up this place, and you’re just jealous you aren’t.”

The future looks bright for Nebbity, as her brand expands beyond her initial expectations. This summer it has graced the fields of festivals such as Boomtown and Bestival, with Jenna holding hopes of an eventual collaboration with US clothing website Dolls Kill.

Whatever is on the horizon, I am certain she will handle it with the same self-confidence and willpower that has graced her brand for the past two years, providing a powerful energy for the all of the bad bitches that join the Nebbity community.