First came avocado on toast, then chia seeds, and matcha soon after. Now an growng trend for foodies everywhere is cannabidiol.

More commonly known as CBD oil, the substance is gaining popularity partly due to its easy accessibility, as it can now be found in High Street health shops and online stores. Regarding its source, the clue is in the name, cannabidiol is derived from chemical compounds (cannabinoids) found in hemp plants of the cannabis sativa family. CBD is predominantly extracted from hemp paste, made from the leaves and flowers of a hemp plant, or from hemp seeds.

“When they see cannabidiol, they assume it’s cannabis and that it’s bad.”

Artefact spoke to Marcus*, an employee for one of the UK’s best known High Street health brands. “It’s confusing for some people when they see cannabidiol, they assume it’s cannabis and that it’s bad when really cannabidiol contains very little of the psychoactive, called THC (tetrahydrocannabinol), found in recreational cannabis that gives you the high,” he said.

In 2017, a World Health Organisation report stated that CBD “does not appear to have abuse potential or cause harm.” As there are little THC strains in cannabidiol, its consumption in Britain is legal as long as the consumer is over 18 years of age, and that the tetrahydrocannabinol content is no more than 0.3% and cannot be easily separated.

CBD oil is available in many forms, usually as a capsule or in a tincture. Holland & Barrett recommend that “a few drops of the oil can be put under the tongue 2-3 times a day. The oil is then left in the mouth for one minute before swallowing. The recommended daily dose (max. 15 drops a day of CBD 2.75% and 10 drops a day of CBD 5%) should not be exceeded.”

“A lot of customers read on the Internet that CBD oil can cure anxiety, insomnia, nausea, and many other things, but these are just opinions…”

When asked to speak about CBD oil, Marcus told Artefact it is a difficult topic to discuss because the substance is still undergoing scientific studies to support supposed benefits.

“A lot of customers read on the Internet that CBD oil can cure anxiety, insomnia, nausea, and many other things, but these are just opinions of others and results from studies where animals were used for testing. I can’t advise someone on the benefits of CBD oil because as of yet it’s not proven scientifically,” he said. Despite this, it has been one of Holland & Barrett’s best-selling products this year.

Cannabidiol has also branched out to skincare, with Holland & Barrett selling a beauty range suitable for all skin types. The day cream and night cream are both anti-oxidant and moisture rich, while the serum claims to help reduce the effects of inflammation. Reducing inflammation also extends to the CBD infused muscle balm, that claims to aid blood circulation during a massage and in effect relieve delayed onset muscle soreness (DOMS). 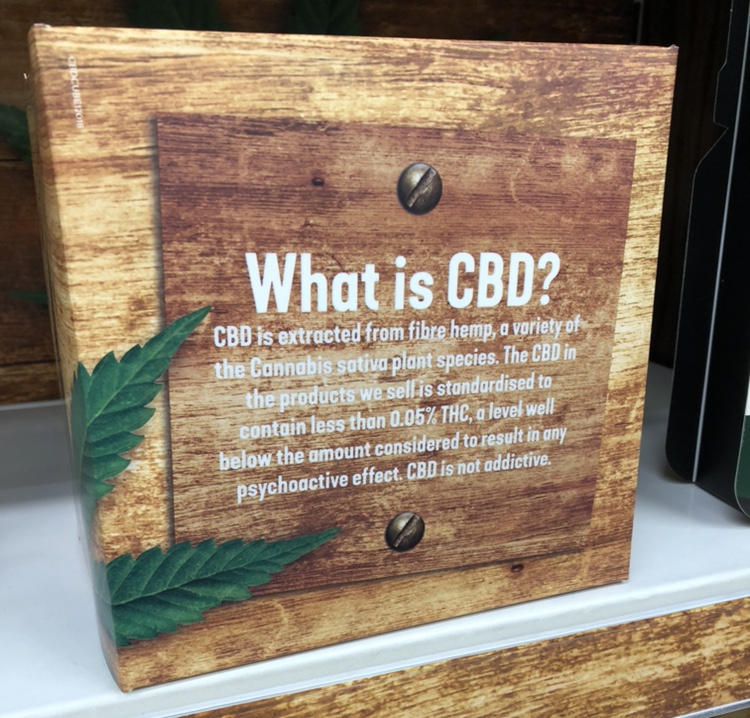 An informative display about CBD oil in a Holland & Barrett store. [Sophie Hall]

Marcus adds that cannabidiol has a “distinctive, earthy, acquired taste”, which is commonly masked by people mixing it in their smoothies, post-workout drinks, or even brownies. The food and drink industry in the UK is gradually taking a likening to cannabidiol; some restaurants have started to include it on their menus.

Notting Hill based Farmacy Kitchen is a restaurant known by many for their plant-based dishes which are free of dairy, refined sugars, chemicals and additives. Inspired by afternoon tea, Farmacy created ‘High Tea’, an experience they say is ‘one of a kind’.

Arriving at High Tea, customers receive a CBD infused cocktail, followed by a selection of sweet and savoury tea-time treats including CBD infused chocolate truffles; and a pot of hemp leaf tea. It is the first restaurant in London to serve CBD, a substance described as “renowned for its feel-good potential and health-boosting benefits”.

Another restaurant is The Canna Kitchen, based in Brighton, their entire menu is based on cannabidiol infusions. For brunch, one can choose ‘Canna Toast’, consisting of sourdough bread with tofu, CBD sunflower seed pesto and hemp hearts. Then for dessert, a strawberry and coconut chia pudding with CBD chocolate dipped hemp shortbread.

The Canna Kitchen informs customers that the human body has a system in place for processing and creating cannabinoids (chemical compounds from cannabis). According to the restaurant, the endocannabinoid system is “found throughout the brain and nervous system”. While it is something many are unaware of, there have been studies conducted relating to its role in the human body. 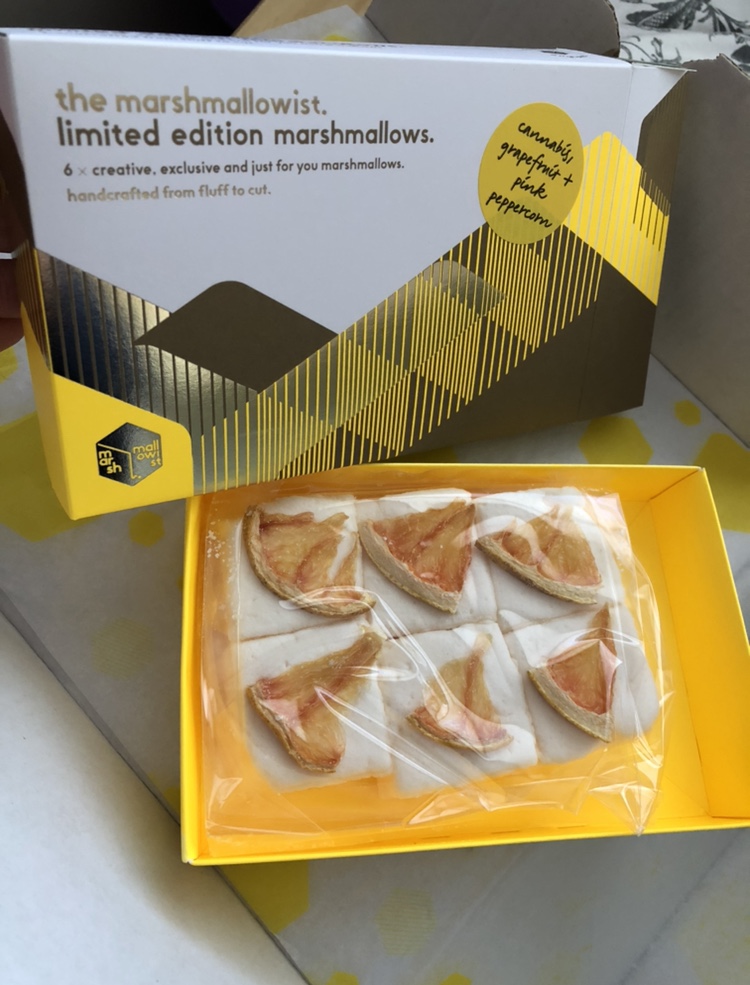 Independent businesses are joining in on including CBD oil in their products too. Leeds based gourmet marshmallow company, The Marshmallowist, have produced cannabis marshmallows. Director, Jenny Simms, told Artefact that flavour takes priority when manufacturing the marshmallows. “To make the vegetal taste of CBD oil more pleasant, we put a citrus note of fresh grapefruit into it which takes away the abrasiveness,” Simms said. “The pink peppercorns give it a warmth so it doesn’t taste acidic, you can still taste CBD oil but it’s a really pleasant flavour.”

Due to the strength of the CBD oil being 1000mg, 10 times the amount in a capsule, the effects from the cannabis marshmallows are felt almost instantly. “You can really feel the effects from eating them, a lot of customers have gotten back to us saying how they’ve slept better and how they feel better. I would advise only to eat two out of the pack of six because of the strength.”

The laws surrounding CBD oil in Britain were relaxed last year following a high profile case of 13-year-old, Billy Caldwell, having his medical cannabis confiscated by UK border forces. The call for change was made by Billy’s mother who stated that without the medicinal cannabis, Billy’s life-threatening seizures returned immediately. However, accessibility to CBD oil across the Atlantic isn’t as easy.

Each state in America is allowed to form and enforce their own laws in addition to abiding with federal laws. In relation to cannabidiol, the laws are murky; while CBD oil is widely available to consume, it is not legal in every state. The US Drug Enforcement Administration allows hemp plants to be grown for research for CBD but does not permit CBD being marketed.

CNBC reported that the New York City Department of Health plans to be more strict with CBD oil being added to food and drink after it banned eateries across the city from using the substance in January. The months leading to October this year will act as a time for compliance so that NYC bars, cafes and restaurants can rid their produce of CBD oil, but after that, any food or drink containing the substance will be considered a violation.

Is CBD oil worth the high hopes? In an interview with The Guardian, professor of psychiatry and cognitive neuroscience at Kings College London, Philip McGuire, said part of the success of cannabidiol is because “The proper clinical trials do suggest it has clinical effects.” While it is newsworthy, McGuire adds that there is still not much evidence about what the substance promises. 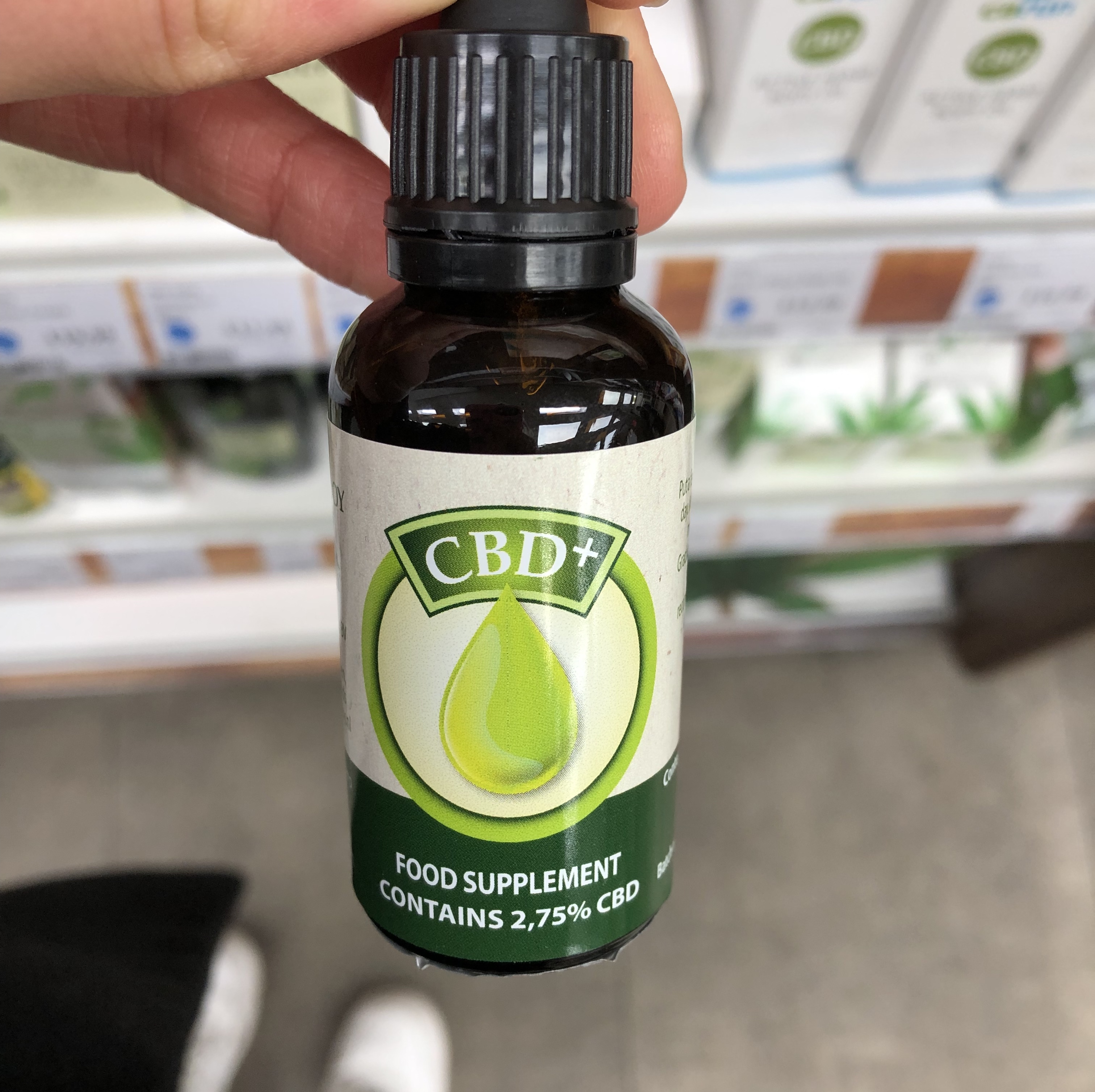 Reviews of CBD oil, like this one by Jacob Hooy, have been mixed. [Sophie Hall]

Reviews of CBD products online are mixed. On Holland & Barrett, the five-star rating bar and one-star rating bar for Jacob Hooy CBD+ oil are nearly equal. With the product averaging at three stars for value, quality and satisfaction, a number of customers say it’s ‘the best’ they have used and that others will notice a difference and ‘not be disappointed’. While others called it ‘very poor and weak’, and said it caused eczema and vision problems.

McGuire, who has published his own study on CBD oil, reminds people that the pharmaceutical doses given in studies do not correlate to the percentage of cannabidiol in over the counter products. With products containing CBD oil, “You can say anything you like as long as you don’t say it will do such and such,” he says,

What is apparent is that despite its surge in popularity in recent years, the continuation of CBD oil being under scientific testing is necessary. Because of CBD oil being mixed with other contents, it’s going to have different effects on every person. Until scientifically proven, CBD oil remains subjective.

* Name of source has been changed on request.

Visit Farmacy here to find out more about High Tea.