Veľká Mača is a small village about 50 km (31 miles) north east of Bratislava, the capital city of Slovakia, with a population of just over 2,600. On the evening of February 21, 2018, when the village was shrouded in darkness, three shots were fired from a modified gas gun. For four days, bodies of an engaged couple, a journalist and an archaeologist, lay on the floor of their house, unnoticed.

Martina Kušnírová was making coffee in the kitchen, for herself and her soon husband-to-be, Ján Kuciak, who was working as an investigative reporter for a portal Aktuality.sk, when she heard noise coming from inside the house as if someone opened a door.

A few seconds later she looked straight into a barrel of a 9mm firearm, held by Tomáš Szabó. Martina wasn’t supposed to be at home at this time, but her change of plan cost her life. Szabó shot her in the head.

When Ján went back into the house from the basement, where he was at the time of Martina’s killing, he saw his fiancé laying face down, blood pouring from her head. He locked eyes with Szabó, who then fired two bullets at him that went through his chest.

The two cups of coffee, never to be drunk, were getting cold in the kitchen, as Szabó left the house to drive away with Miroslav Marček, the designated getaway driver. 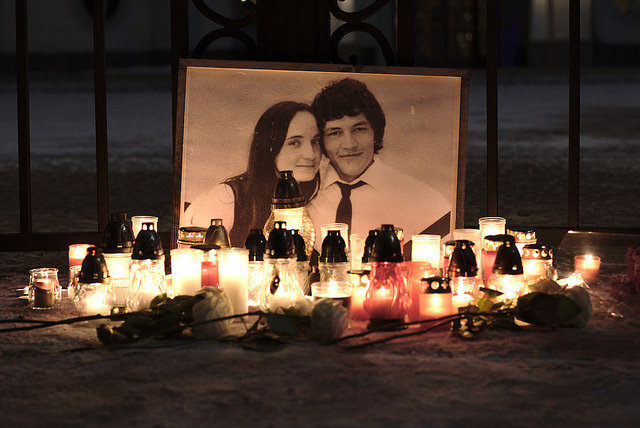 The response of the general public to the murder was dominated by a wave of disgust and defiance in the otherwise amenable people of Slovakia, which resulted in long-lasting public protests and numerous personnel changes in the government and state institutions.

Protests were held across the globe by Slovak ex-pats, in London, Stockholm, Vancouver, Peking, Madrid, Paris, Prague and others, and in many towns in Slovakia, including Bratislava, ten of thousands of people gathered, at the biggest protest since the 1989 Velvet revolution.

Represented by the For a Decent Slovakia Initiative, whose supporters demanded “a thorough and independent investigation of the murder of Ján Kuciak and Martina Kušnírová, with international investigators participating and a new trustworthy government excluding anyone who is suspicious from corruption and connection to the organised crime,” the organisers of the protests said. 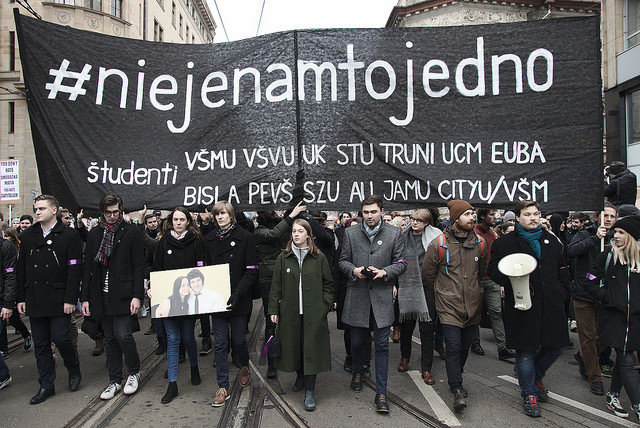 Students went in the streets fighting for justice for Jan and Martina [Flickr:Martin Tkac]

The scale of the backlash from the public, led to demands to cut the connections between a poisonous part of the government and organised crime. The interior minister Róbert Kaliňák resigned in March 2018, followed by the prime minister Róbert Fico and, later in May, the police president Tibor Gašpar as well.

Before his resignation, Fico appeared on TV offering a one million euro (£872,000) reward to anyone who would help solve the crime. Next to him was a table with five hundred-euro (£436) notes stacked neatly and a guard standing with a firearm next to it. However, this populistic move only hurt his desperate effort to save himself.

After handing in his resignation to the president Andrej Kiska, Fico grinned at him and said: ”Mister president, stay calm, I’m not going anywhere, I am going to be an active head of the party.”

However, there are continuing concerns that although Fico is no longer the prime minister, his presence remains strong and he acts as a puppeteer controlling the ruling party and the new PM.

Seven months after the death of the journalist and his fiancée, the police arrested four suspects in connection with the double murder: Tomáš Szabó, Miroslav Marček and Zoltán Andruskó. Also arrested was Alena Zsuzsová, who is said to have acted as the co-ordinator of this group and had been paid seventy thousand euro (£61,094) for Kuciak’s death.

The person who ordered the execution still remains to be uncovered. “I’m in shock,” said Zlatica Kušnírová, Martina’s mother, after the arrests, in The New York Times. “I know it will never bring our children back to us, but I hope justice will be done. I hope that the police will manage to arrest not only the killers but also the person or people who ordered the murder.”

The four suspects are held in prison indefinitely whilst the police investigation is underway, due to fears of reoffending and witness tampering, as ruled by the Specialized Criminal Court.

One of the suspects started co-operating with the police soon after the arrests, according to the leak from the police investigation uncovered by Slovak media. Andruskó allegedly gave testimony in which he pointed at the controversial Slovak businessman, Marián Kočner, as the person who order the operation.

Kočner denied the allegations and is not currently being actively investigated in relation to the murder. He has been since arrested and awaits a trial in connection with tax-related crimes. Kuciak published several pieces that exposed Kočner’s unscrupulous financial transactions.

Elsewhere, Kočner has been known to harass journalists who wrote unfavourably about him. One such actions was a phone call from September 2017, in which Kočner accused Kuciak of accepting payments to write articles that discredited him and threatened the journalist.

“Mr Kuciak, I’ll tell you one thing. I’ll pay attention to yourself, your mother, your father, your siblings, I’ll be interested in everyone and will publish everything I’ll find on you, Mr Kuciak,” Kočner said in the recording of this phone call. Kuciak later took it to the police, who dismissed the case.

Kočner also had connections to Alena Zsuzsová, the co-ordinator of the operation; there is photographic evidence of him and Zsuzsová meeting a month before the murder. Kočner now appears to be connected to the murder of Ján Kuciak. But even though all signs point at him, it is questionable whether Kočner would resort to such extremes, as this doesn’t seem to be his kind of ‘modus operandi’.

Before the murder, Kuciak was working on a story that exposed links between the Italian-organised crime group ‘Ndrangheta, and the Slovak government. The Italian mafia had invaded the Eastern Bloc after the fall of the Berlin Wall, thanks to the good relations between them and the various communist governments there.

Kuciak exposed four Italian families connected to ‘Ndrangheta – Vadala, Cinnanteo, Rodo, and Catroppo – all of which own agricultural businesses. They use the companies to claim EU farming subsidies, the legitimacy of which is often questionable. Vadala, who is known to have a collection of luxury cars, had a two-year romantic relationship with Mária Trošková, the assistant to the former PM Róbert Fico.

The investigation into the murder of Ján Kuciak and Martina Kušnírová has uncovered corruption said to involve a number of powerful people in high places.

Tibor Gašpar, who at the time of the murder was the Police corps president, is alleged to have given orders to the head of the Financial Intelligence Unit at the National Criminal Agency (NAKA), Pavol Vorobjov, to screen Kuciak, few months before the killing.

The role of the unit lies in exposing illegal income from criminal activities and money laundering, and it remains unclear why would this department had to screen a journalist. Vorobjov personally testified that the order was given from Gašpar, but he denies the accusation.

The new interior minister Denisa Saková confirmed in a televised political talk show O 5 minút 12 (5 minutes to 12) that the screening of Kuciak was performed by Vorobjov, ordered by his superior, at the time Gašpar, in the official document from the Financial Intelligence Unit. It is not known why the request for screening was made.

“Nezabudneme! Pokračujeme!” (“We won’t forget! We continue!”), is the name of the protest that was held on the first anniversary of the murder, organised by the For a Decent Slovakia Initiative, which stood behind most of the protests held across Slovakia from March to November last year.

“For a year we have been gathering at squares, calling for decency and justice. We create a community demanding a new culture of managing public affairs, decency, not arrogance and hate, we call for the truth and justice instead of lies and populism. We have torn down the curtain together and were given an opportunity to see how corruption is being swept under the carpet in our country, how police officers abuse the power vested in them and how the innocent and weaker are hurt. We want a decent and rightful Slovakia,” they said. 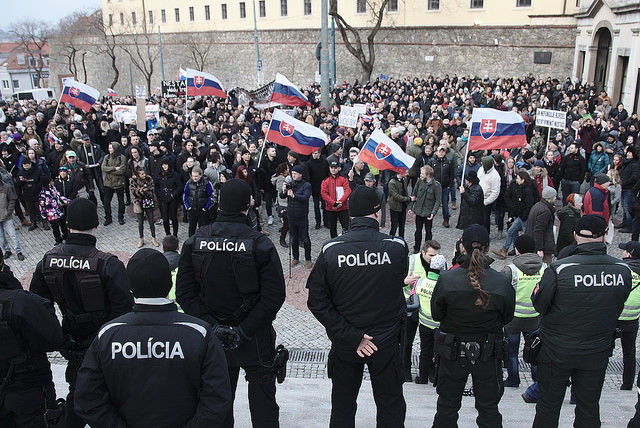 “The atmosphere has definitely changed after the murder. I think investigative journalists are more careful now, but the murder has not stopped them from reporting about the wrongdoings and corruption practices. Conversely, they seem to be even more eager in their job,” said Radka Minarechová, a journalist at The Slovak Spectator.

“Shortly after we found out about the murder, a season of changes has begun. His death brought out an emotion in people, a need to change something in our country,” said Simona Ivančáková from The News Agency of the Slovak Republic (TASR).

Revelations in the murder investigation exposed tentacles of corruption in high places, throttling the government, the police, security services being used by oligarchs and dodgy businessmen, to achieve their selfish goals.

Should Ján and Martina had lost their lives for this? Absolutely not. Now the campaign set up in their memory is fighting for decency and justice for Slovakia.