The UK is the third-largest producer of milk in the EU, after Germany and France, and is the 10th largest producer worldwide. According to a report presented to the House of Commons in January 2016, milk accounted for 17.8% of total agricultural output in the UK.

There is no doubt that the milk industry is a large part of the British heritage, with 96% of UK adults using milk of some kind, with cow’s milk being the most widely used type at 86%. 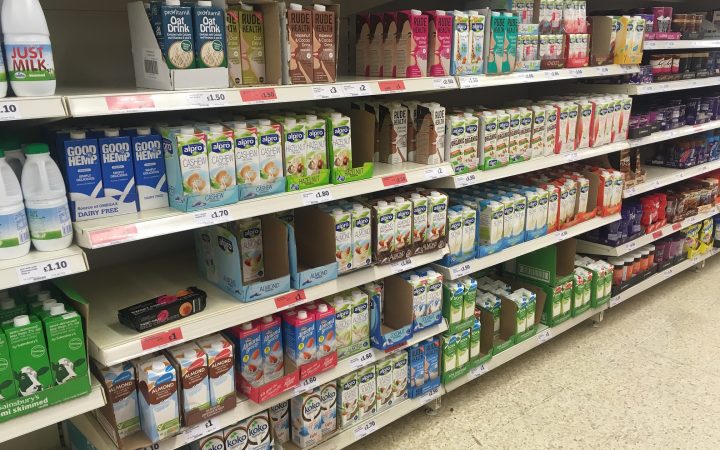 Selection of non-dairy milk in a supermarket [Dominika Kostialikova]

The number of people going vegan has seen steady growth in recent years. The reasons behind it are mostly concerns about animal welfare in agriculture, followed by a desire to gain a healthier lifestyle. According to the Vegan Trade Journal, 42% of British vegans decided to change their diet last year. The Vegan Society found there were 600,000 vegans in Great Britain in 2018, which is 1.16% of the population, whilst the number of vegans was only 150,000 in 2014.

Damian Carrington wrote in The Guardian that “avoiding meat and dairy products is the single biggest way to reduce your environmental impact on the planet, according to the scientists behind the most comprehensive analysis to date of the damage farming does to the planet.” Environmental concerns are a big reason why people turn to a vegan diet.

A study led by Joseph Poore and Tomas Nemecek at the Oxford University, published in the magazine Science last year, reveals that “meat, aquaculture (farming of fish and other organisms), eggs, and dairy use 83% of the world’s farmland and contribute 56-58% of food’s different emissions, despite providing only 37% of our protein and 18% of our calories.”

But not all that glitters is gold and there is a hidden side of the plant-based milk. Brazil is the largest producer of soya beans in the world. After the global outcry for the protection of rainforests, farmers slowly moved their interest to the Cerrado, a tropical savanna, that is home to 5% of species on the planet. 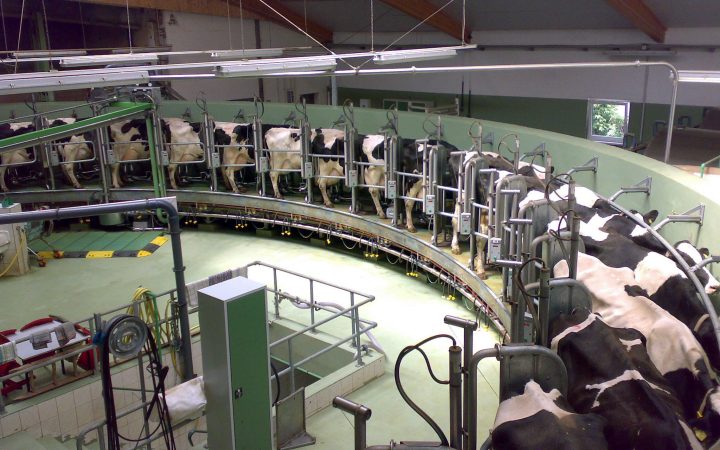 An investigation into the deforestation of Brazil, conducted by Reuters, brings shocking discoveries to how fast is the largest savannah in South America disappearing. “This habitat lost more than 105,000 square kilometres of native cover since 2008, according to government figures. That’s 50% more than the deforestation seen during the same period in the Amazon, a biome more than three times larger. Accounting for relative size, the Cerrado is disappearing nearly four times faster than the rainforest,” Jake Spring reported.

Farmers have now deforested an area of the Cerrado larger than South Korea, according to Spring. The farmers would buy the land cheaply, then mow down the vegetation and plant soya seeds. This comes at a price. The naturally occuring plants set roots deeply in the earth to survive episodes of droughts. After the surface vegetation has been destroyed, dying roots released 248 million tonnes of greenhouse gases into the atmosphere in 2016, according to the Climate Observatory, a Brazilian conservation group. This number represents two-and-a-half times more than annual emissions from all cars in Brazil.

“The UK is the third-largest producer of milk in the EU.”

Almond milk has for a long time been the most popular dairy-milk alternative in the UK, accounting for two out of three plant-based milk sales. California is the largest producer of almonds in the world, with around 80% of the market produce being sold worldwide. It’s also estimated that around 80% of all water in the state of California is being used by farmers to produce their crops.

It takes around 70 litres of water to produce just 16 almonds. That’s around the amount used in a litre of almond milk. California has exported $103 million (£78m) worth of almonds to the UK in 2014. California experienced its driest period since the record taking started, from 2011 to 2017, it is estimated that more than 100 million trees died due to the drought.

But not only are almonds a threat to sustainability in California, with the range of nut, vegetable and fruit crops being grown in the state supplying nearly half of all US demand.

Another issue in connection with almonds is the level of pesticides almonds contain. Due to the high amount of oil and fat content, almonds easily absorb pesticides. Almonds contain nine known pesticide residues, out of which one is a known carcinogen, four are suspected hormone disruptors, three are neurotoxins and four are toxic to honeybees, according to United States Department of Agriculture (USDA). 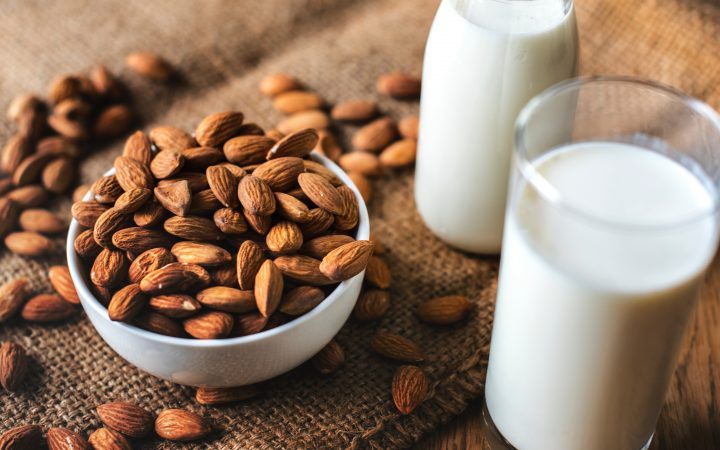 Almond milk was the most popular dairy alternative in the UK [Pexels:rawpixel]

Oat milk is a rising star between the plant-based milk in the UK. Oatly, founded in the 1990s, a Swedish producer of oat milk, started selling its product here in the UK in April 2013. According to the Financial Times, oat milk has outstripped almonds milk in 2018. Oatly’s turnover is expected to rise almost 60%, according to Ishen Paran, UK general manager at Oatly.

The UK is the second largest market for Oatly, covering 18% of its sales. The largest market remains Sweden, with 47% of sales. Oat milk has proven to be popular for use with coffee, due to how easy it is to froth it and it’s nice and full flavour. Even though Oatly tries to implement more environmentally friendly solutions in the production of its product (such as using vans fuelled by biofuels in Sweden), the product still has to travel a long distance to be available on the UK market. Conventionally grown oats also contain seven known pesticides, based on the data obtained from USDA.

Corrine Look, a politics student at SOAS, who is working in a vegan café near Brick Lane, The Canvas café, has recently switched to vegan from a vegetarian diet. Abandoning dairy wasn’t such a difficult switch for her, as dairy upset her stomach, as she recalls.

When asked about the downsides of growing soya beans or almonds, Corrine admitted that she’s aware of the issues: “Soy and water are very water intensive. But in comparison with dairy, they are still better than buying milk from dairy industries in terms of water use and emissions,” she said.

“It’s never a perfect consumption pattern. I try my best to not to buy things that are bad for the environment. That’s what I find hard about veganism, that sometimes there are contradictions in it. You don’t buy dairy but then you buy something that causes deforestation, or clothes that are being made by children in sweatshops. If I was better, I would do a lot more research,” she added. 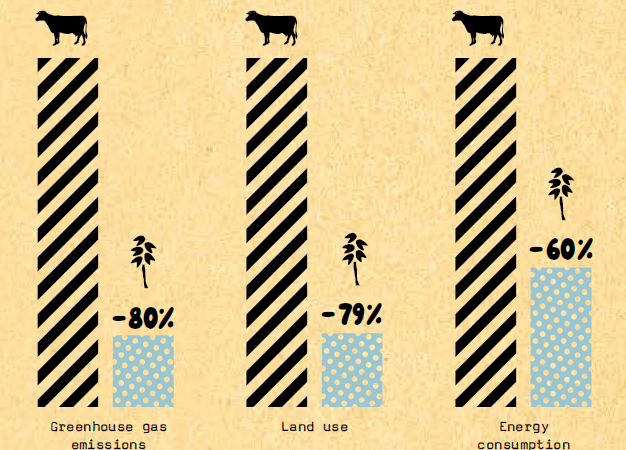 As small farms struggle to stay in business, producers of dairy alternatives are trying hard to keep up with the demand. In 2018, the UK had a shortage of oat milk, when Oatly, the non-dairy milk of choice, ran out of stock. “Part of me wants to support local business and keeping things within the UK. I maybe would consume dairy if I knew what I was buying was sourced from local farmers, farmed sustainably and ethically produced. You just can’t know that if you’re buying from a supermarket,” Corrine said.

But not everyone sees it the same way. Owen, known as Muir2000 on Reddit, thinks that dairy farming just might be obsolete: “If people choose to stop purchasing your goods, then you have to make something else. There are thousands of jobs that have been lost to history, and we’re better for it. We no longer have wagon makers, whalers, ice cutters, lamplighters, or switchboard operators. Instead, we have automobiles, electric lighting, refrigerators, and direct calling.”

There are several factors that fuel our decision as buyers. It may be fear of neglected animal welfare, effort to buy as much locally as possible or the carbon footprint of a certain product.

There isn’t a product that, in a certain way, has zero impact on the environment. It’s about consuming with moderation and asking questions. It’s about seeing a cow, an innocent living creature, behind that glass of milk.