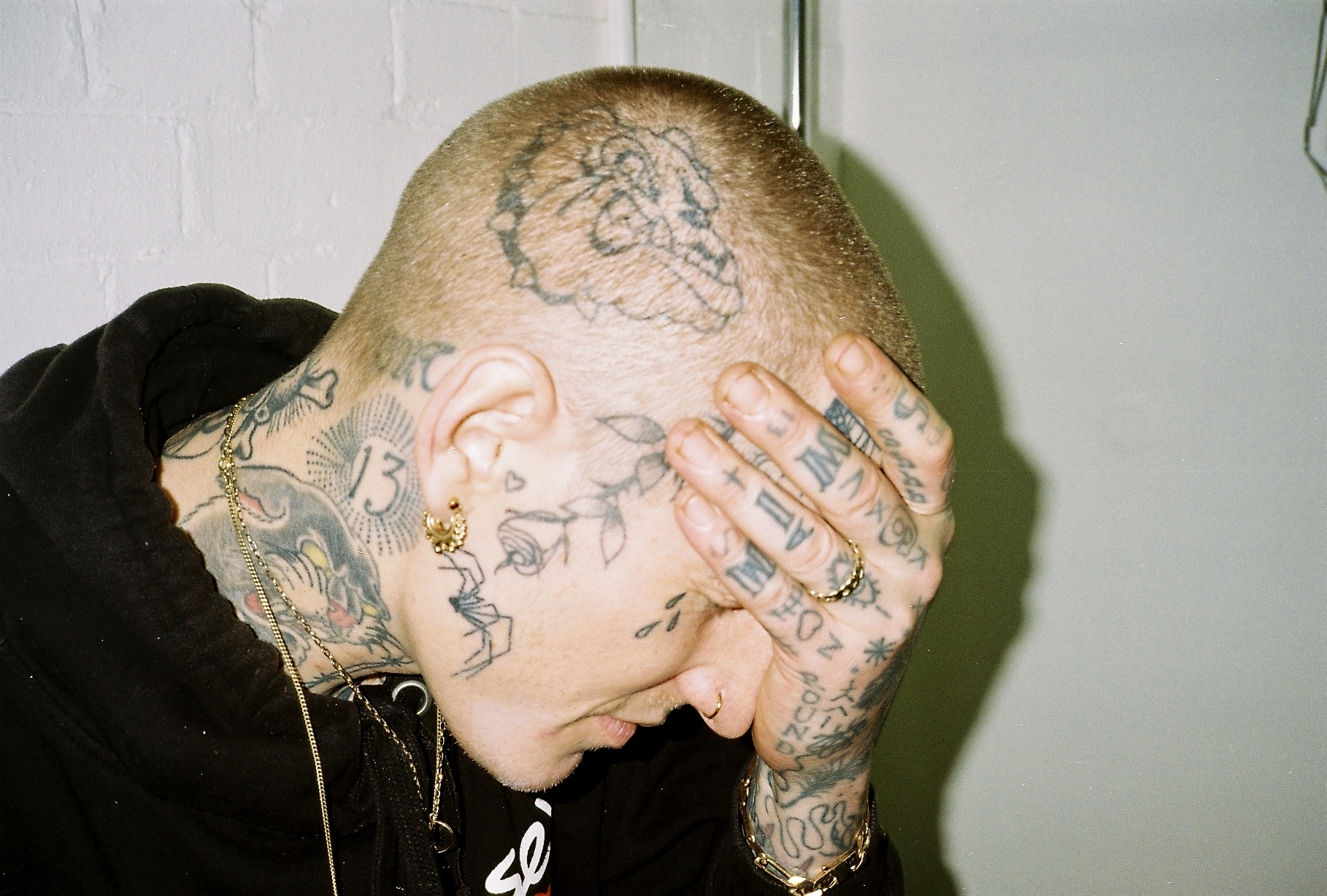 “Most people think that I’ve killed three people or been to prison for 30 years,” Ross says as he points to the three teardrops under his right eye. “I got the tears for my three girls that I’m no longer with.”

Ross Hell is a tattoo artist born in Hastings and living in London. His motive is to offer affordable artwork outside of expensive studios. 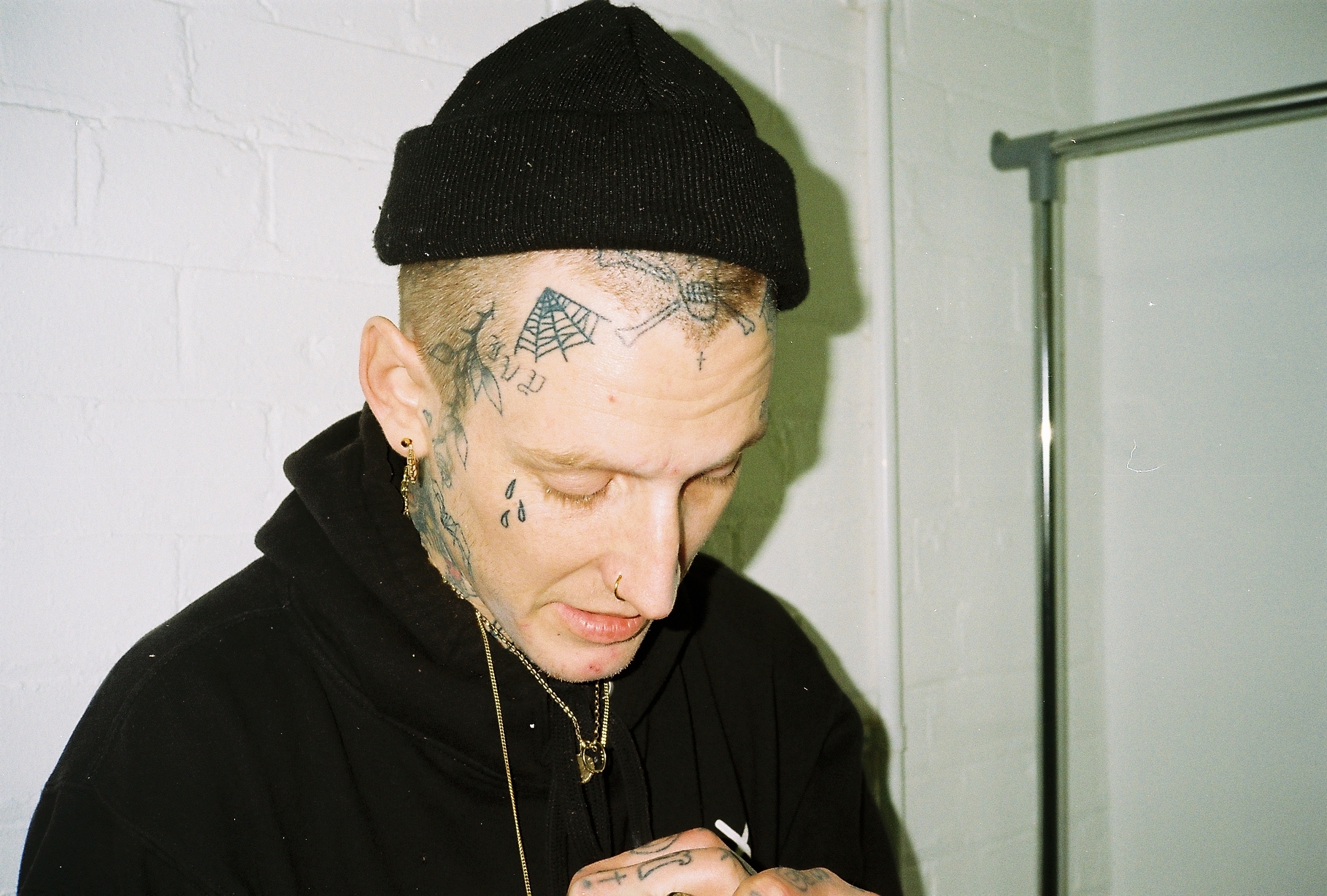 Facial tattoos have a long history of negative perception and cultural meaning. In Russia tattoos are a huge part of prison culture. They symbolise hierarchy and status within criminal organisations. In Japan, Edo era facial tattoos were given to criminals as punishment, leaving them unable to escape their crimes. The stigma behind this is still alive, many people still associate tattoos with the Yakuza and other criminal gangs.

Here in the UK, it’s widely acknowledged that facial tattoos carry a social stigma and affect your ability to find employment, but how are attitudes changing?

I met up with a tattoo artist, Ross Hell, who showed me into his home studio in Hackney Wick. For a man whose face is quite literally covered in tattoos, he couldn’t have been more welcoming. Every other sentence Ross offered me a tea, biscuit, beer or snack. Whilst interviewing Ross, a homeless man came by his studio to see if he could get a tattoo for the £50 he had on him. Ross immediately agreed, despite usually charging £80 for flash – a tattoo that has been pre-drawn by the artist, usually quite small in size.

Ross lifts up his shirt to reveal his stomach, carrying the words “working class” in capital letters. It’s clear that the tattoos on his body carry a much deeper meaning than just an aesthetic: “Every tattoo has a different meaning for me, the older I get the soppier I get with what they mean,” Ross tells me.

According to Statista, a 2015 study on adult Americans found that 40% of respondents stated that they perceive people with tattoos as more rebellious. What society perceives as sinister or criminal can often have more honest meanings, relating to family and personal heritage 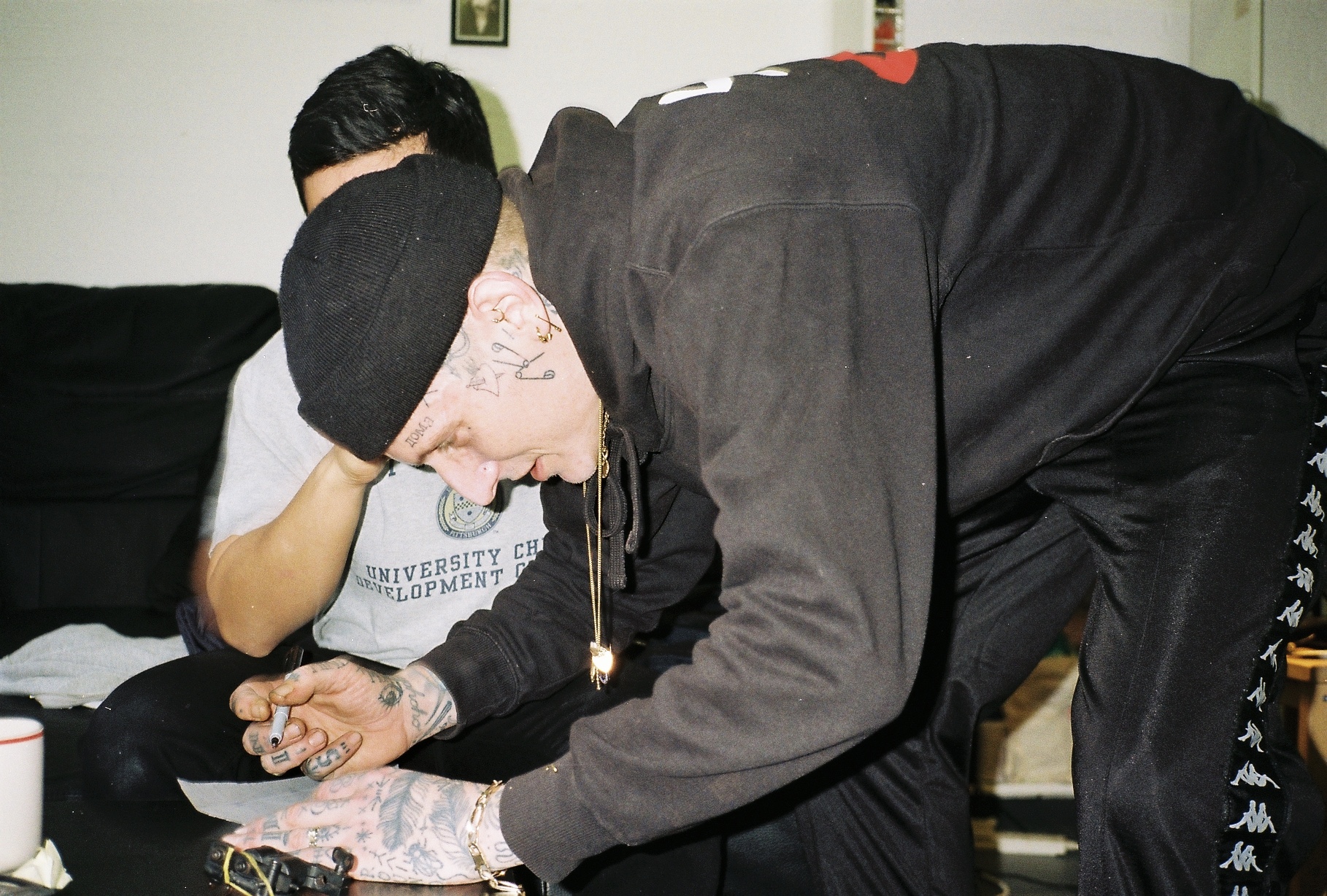 Ross draws up a tattoo with a client [Marcus Brown]

“Tattoos have always been a working-class thing: sailors, builders, naval men, army, even circus acts,” says Ross. He argues that “chavs were the punks and skinheads of today.” Youth cultures that were misunderstood in their day, that are now celebrated by all classes.

Often these style choices only become “socially acceptable” once they have been appropriated by high fashion and celebrity. By this time you could argue that an element of authenticity has been lost.

Other similarities could be drawn with Dr Martens, originally workers boots worn by postmen that became favoured by skinheads and were later adopted by the fashion industry. Similarly to Nike Air Max, designed by Tinker Hatfield to enhance performance with the athlete in mind, later adopted by ‘scally’s and chavs’ can now be found on the feet of everyone from students to office workers.

“I tell people, obviously it’s going to limit you with certain jobs. I put the stencil on so they can have a look. I triple check with them before I start. I say ‘are you sure you don’t want the tattoo anywhere else?’” Ross assured me.

Anyone who decides to get a tattoo on their face has to be prepared to deal with the potential change it will have to their life “I’ve tattooed the faces of loads of different people, chefs, artists, managers. Not so many office workers.” 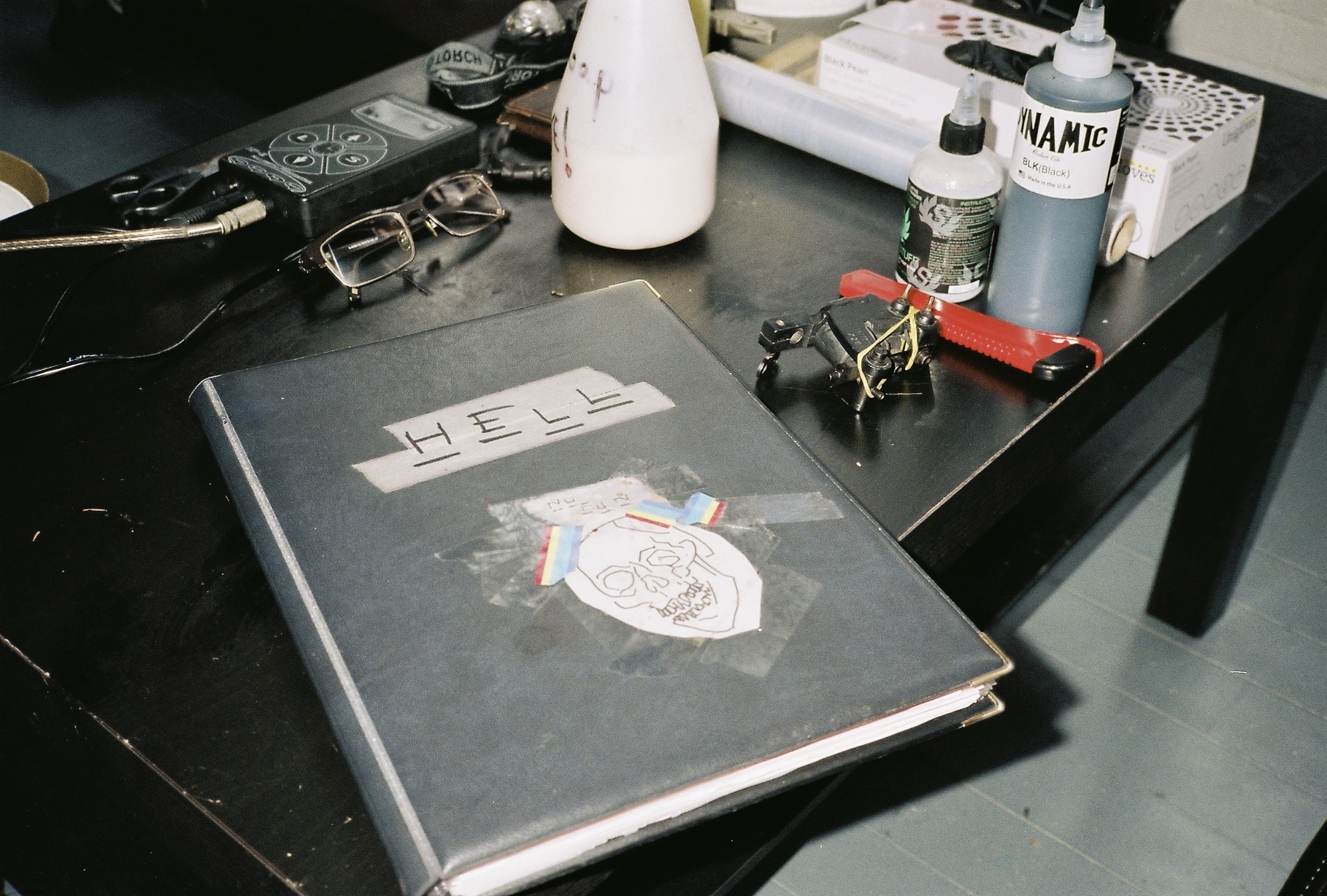 A significant proportion of the population have tattoos: 38% of the global respondents say they have at least one tattoo, according to Dalia Research, however, the amount of people with tattoos on their face is much smaller. “You join a club of people that have taken that leap into the unknown,” says Ross.

Rarely is a facial tattoo someone first “generally they’ve got a lot of tattoos already,” Ross says. However young people who want to get attention quickly might choose to do this, “I’ve turned away a few kids, they have maybe two tattoos on their hands, one on their throat. They take their top off an there are’s no tattoos on them. It’s these new druggy lean rappers.” Trap artists like Post Malone or Lil Pump who famously sport tattoos on their face strongly influence the younger generation.

Speaking to tattoo removal surgeon, Wayne, he revealed the reason most people remove their tattoos “boils down to professional opportunity. If they find that it’s getting in the way of making money or getting a job then they will try to remove it.” Despite living in an increasingly accepting society, people still feel the need to remove tattoos in order to progress in a professional environment.

Wayne, who had tattoos of his own removed says: “I knew that the quality of the artwork out there was getting so much better than what it was 10 years ago. I wanted something better.” This goes back to the idea that tattoos are temporary trends, that come and go, rather than having any significant cultural meaning. “It’s not considered a lifelong commitment if you do want to get rid of it,” Wayne continues.

Many people remove tattoos for the same reason as Wayne “we work closely with the tattoo industry, lightening down so that people can get new cover-ups” he says. People now have the ability to replace their old tattoos with ones that follow current fashion trends or artists work they prefer. 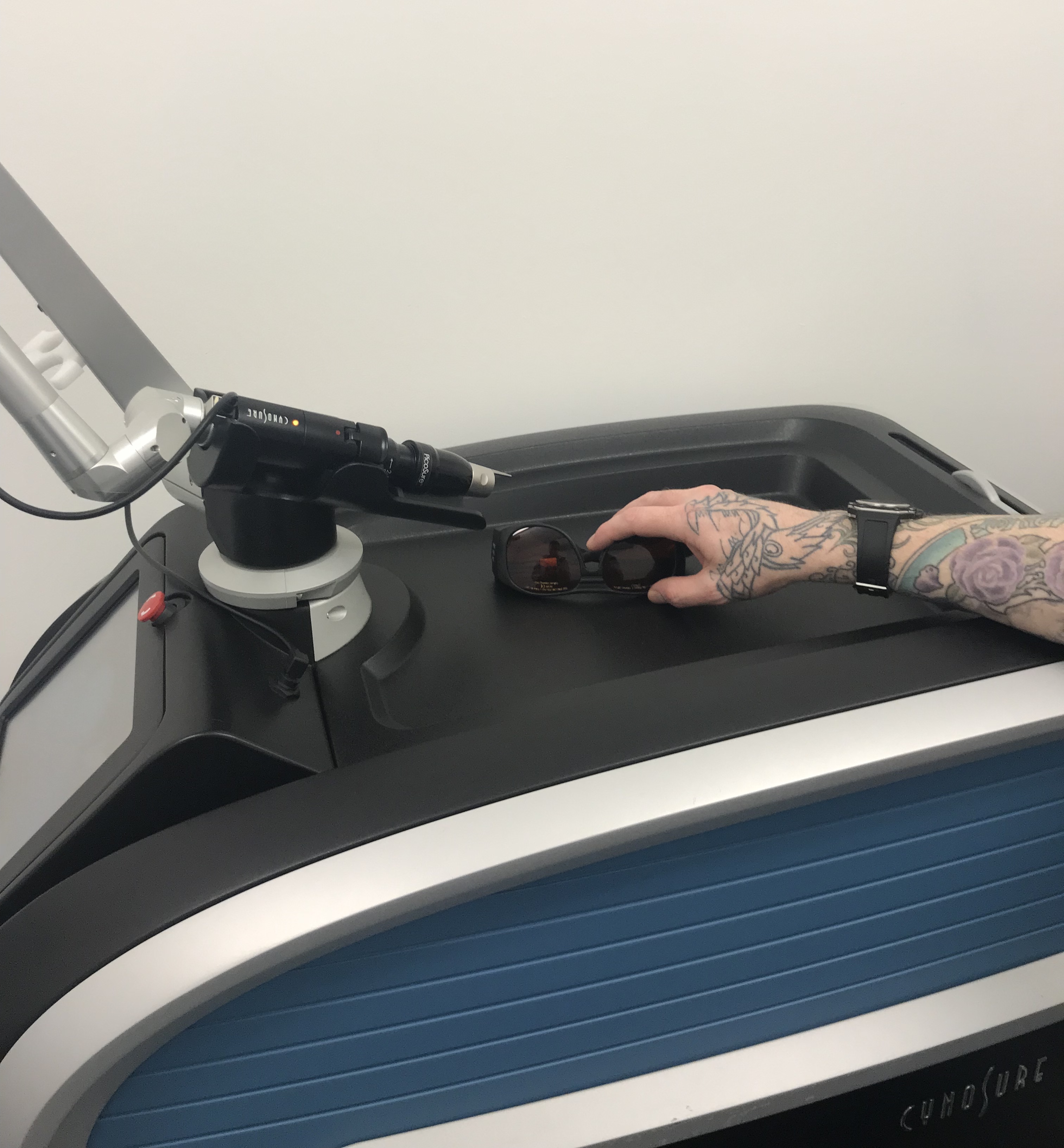 Tattoo styles have changed dramatically throughout history, from traditional navy tattoos that depict nautical scenes, Russian prison tattoos, rich in religious imagery to tribal tattoos administered through tapping techniques using sticks and animal bone. These styles have all been appropriated by artists and studios in the 21st century using modern techniques to create a more refined version of the inspiration.

“Blue collar, white collar, we’ve got some senior judges and MPs. There’s definitely a wide range of people that get it done,” Wayne says. Big businesses are doing more to become inclusive of gender, race and disability, however, less attention is paid to individuality. Although arguably this is less important.

One of the biggest issues with the tattoo removal industry is the deregulated market in the UK “it’s been flooded with cheap machines,” says Wayne. He goes on to say, that in some cases these methods of removal “create more scarring than the actual tattoo itself.”

Deregulated markets in both tattooing and the tattoo removal industry can often be the reason clients are dissatisfied with their work in the first place. The FDA website states “we do know some tattoo removal procedures may leave permanent scarring.”

When markets aren’t regulated it doesn’t guarantee quality. However, it enables artists like Ross to practice their craft without paying premium rates to studios and undergoing lengthy unpaid apprenticeships.

“I went into an apprenticeship 14, 15 years ago. They wanted me there seven days a week and I wasn’t getting paid, I would open the shop and lock up and clean up. I couldn’t afford it,” Ross tells us.

Society may be becoming more accepting towards tattoos of all kinds, however, employers in professional industries are still playing catch up. Like many things, the real issue lies in perception and misunderstanding. Perhaps the only way society will become accepting is if we see facial tattoos in high power jobs like businessmen and politicians.