Despite a record turn out of young people at the last general election – 56% according to a New Musical Express exit poll – there are growing concerns that limitations on free speech at universities may negatively impact young people’s involvement in politics.

Often heralded as bastions of self-development and open-mindedness, universities are traditionally places of unparalleled free inquiry, debate and discussion. However, some feel their freedom of speech has come under fire in these institutions, citing alleged ‘political correctness’ and ‘university bureaucracy.’

An event hosted at Bristol University on February 13 found itself at the forefront of this issue after Angelos Sofocleous, a student at Durham University, was forcibly uninvited for making comments deemed transphobic on Twitter.

He controversially wrote: “RT [retweet] if women don’t have penises,” in response to an article on transgender identity published in The Spectator, later further defending his views.

[pullquote align=”right”]“These ordeals are indicative of a broader climate of disdain for free speech across the UK”[/pullquote]”Two weeks after notifying the SU [students’ union] and one week before the event was due to take place, we were informed that in order to hold the event as scheduled we must disinvite Angelos as a panellist,” a spokesperson for the university’s Free Speech Society told Artefact.

The panel aimed to pose the question, “is there an issue with free speech on campus?” To which the society now claims the students’ union has answered, “loud and clear.”

Taking to Twitter after the decision had been made, Sofocleous said: “Nothing could provide a more ironic indication of the current status of social justice orthodoxy in academia than banning a speaker from an event titled ‘Free speech on campus’.”

After an adverse reaction, the students’ union claimed it was “committed” to free speech, but insisted security would have been needed at the event due to the “high risk” posed by Sofocleous.

In response, the Free Speech Society told Artefact: “We wonder why Angelos, who lives his life as a student on a university campus, would constitute a ‘high risk’. In fact, the university security services informed us that they were not at all consulted on the matter.”

In the face of the ban, Sofocleous attended the event as an audience member, later taking to the stage in defiance. “After the audience’s demand, I joined the panel. Three people had a civilised debate, exchanged criticisms, added to each other’s points and enjoyed a healthy and productive dialogue with the audience,” he announced on Twitter.

The society shares concerns that this form of ‘censorship’ could lead to more apathy among young voters, reversing much of the work done to encourage greater youth engagement in politics.

“If young people are enthusiastic about particular topics but continually see them being silenced, that could have a chilling effect on their willingness to engage with social and political issues,” a society spokesperson tells Artefact.

[pullquote align=”right”]“These concepts are incredibly subjective”[/pullquote]In order to combat the issues taking place on campus, an inquiry was launched by the Joint Committee on Human Rights in 2017. The investigation aimed to examine the main reasons behind the limitation of free speech on campus and published advice for universities and students.

Notably, “unnecessary bureaucracy imposed on those organising events” was found to be a significant issue on campus, which the Free Speech Society claims they fell victim to.

The inquiry found that “incidents of intimidating behaviour by protesters,” as well as “intolerant attitudes, often incorrectly using the banner of ‘no-platforming’ and ‘safe space’ policies,” were also problems at universities across the country.

In 2018 a number of students protested an appearance by Steve Bannon at the Oxford Union, even attempting to prevent others from attending. “We think these ordeals are indicative of a broader climate of disdain for free speech across the UK,” the society says. “We’re concerned that those we’ve elected are now deciding what we should hear and using that to broaden their mandate.” 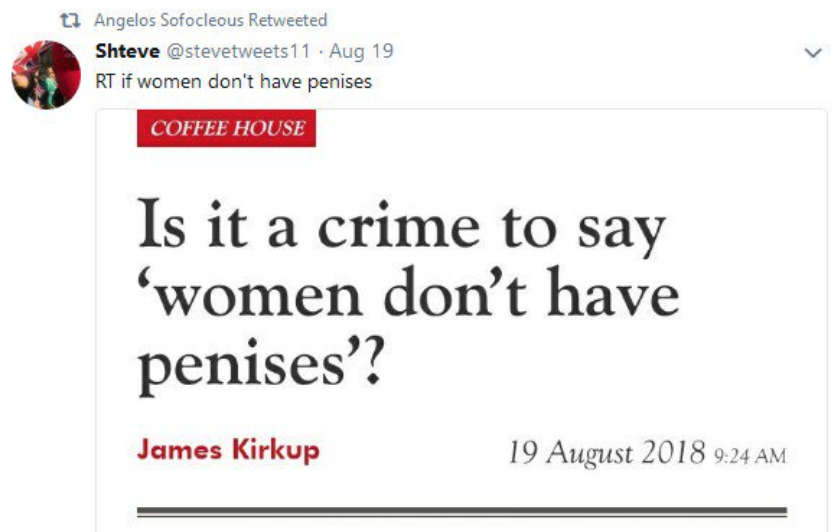 Sofocleous shared the controversial message on his Twitter page [@Sofocleous_A]

While the right to free expression is protected under UK law, there are some limitations in place on what can be said in public environments, which some claim creates a ‘blurred-line’ between what can and cannot be said.

Hate speech laws dictate that expressions of hatred against someone on account of their identity – including race, disability, nationality, religion, sexual orientation and gender identity – are forbidden.

“Of course, we must abide by the law as it stands, though we don’t necessarily agree with everything we must abide by. There are many different opinions on speech laws across our society, which would suggest these concepts are incredibly subjective,” the society adds.

A report by Universities UK noted: “If universities are to be dynamic organisations that tackle boundaries, they must also be places where differing and difficult views can be brought forward, listened to and challenged.” Later adding that this is a crucial aspect of the major role educational institutions play in “shaping a democratic, civilised and inclusive society.”

In late 2017, a similar controversy struck Wilfrid Laurier University in Ontario, bringing the topic of free speech at universities back into the headlines. Lindsay Shepherd, who was a masters student and teaching assistant at the institution, faced disciplinary action after sharing footage featuring a prominent trans-rights critic in class.

Shepherd later released a recording of her meeting with university staff, who has since apologised for punishing her. University president Deborah MacLatchy said of the issue: “Let me be clear by stating that Laurier is committed to the abiding principles of freedom of speech and freedom of expression. Giving life to these principles while respecting fundamentally important human rights and our institutional values is not a simple matter.”

She added: “The intense media interest here points to a highly polarising and very complicated set of issues that is affecting universities across the democratic world.”

Although rooted in good intentions, it is apparent many feel the constraints on free speech at universities distinctly contradict the foundations of free enquiry they were built on. Amid an increasingly polarised political landscape, the desire for debate over censorship thrives in these institutions.