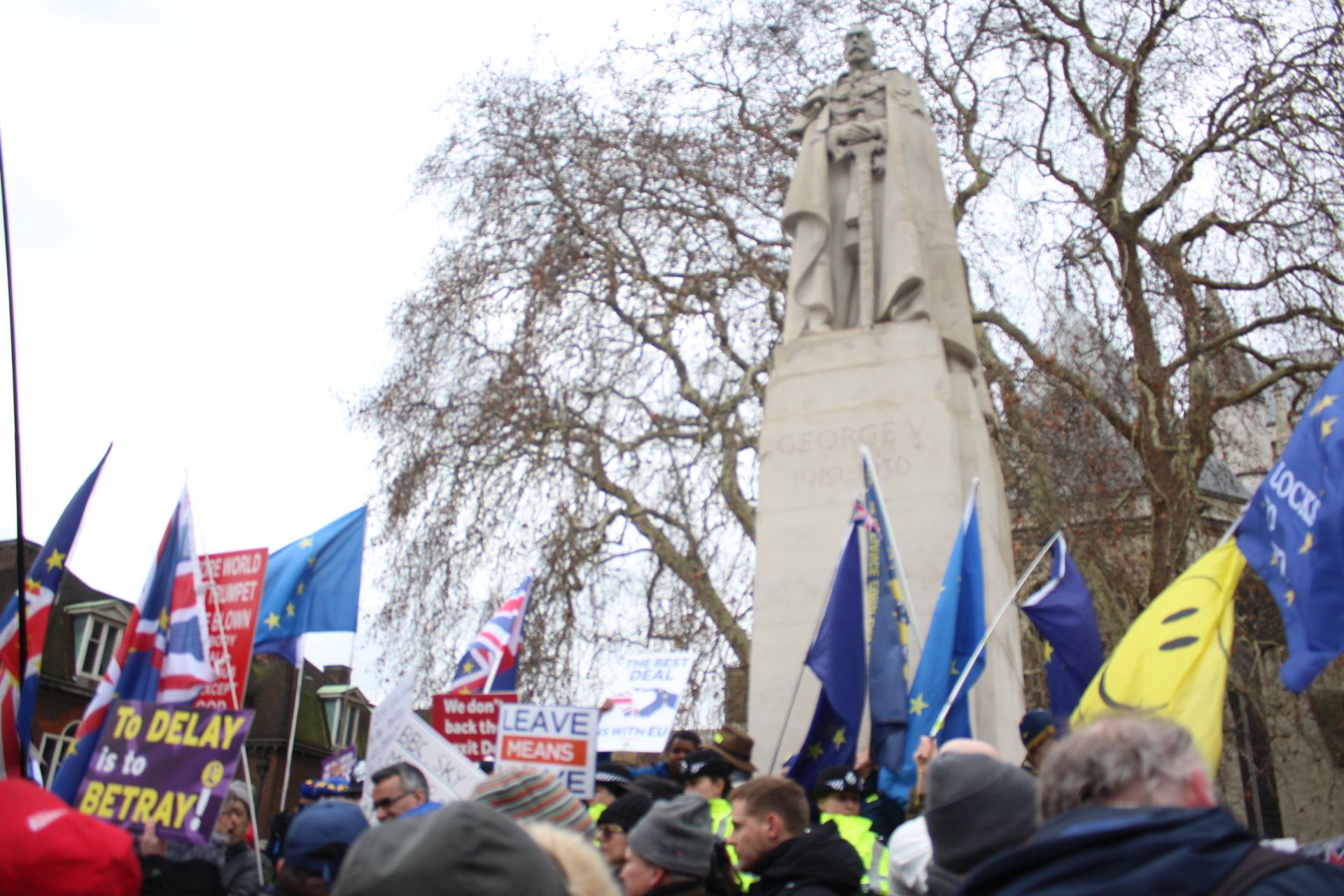 Exiting the warmth of Westminster tube station, I step out into the cool chill of Winter and already can hear the chanting of protesters in the distance. It is January 29, 2019, and as the Brexit talks continue, the louder the campaigner’s voices become.

Today members of parliament are set to vote on amendments Prime Minister Theresa May has made to the Brexit deal, following a rejection two weeks prior.

The deal was put in place to mark Britain’s exit from the European Union, which is set to take place on March 29 this year.

Members of parliament are set to vote today on amendments Mrs May has made to the proposal.

Carl Buckland, a Leave campaigner, speaks about why he thinks it is best that the UK leave the European Union. “For me the biggest advantage of leaving the EU would be getting out of an imperialist, war-mongering, un-democratic system. To me it’s all about the politics, so we can have an independent foreign policy.”

One of the reasons cited by Leave campaigners to back Brexit would be to solve any immigration issues that the UK may have. Buckland says, “it would benefit immigration too. We’re the most overpopulated place, Britain is overpopulated, everyone’s just on top of each other. Our wildlife is devastated. The more people that come here, the more roads that are built, and animals that are killed.”

“For me, the biggest advantage of leaving the EU would be getting out of an imperialist, war-mongering, un-democratic system.”

It is just approaching three in the afternoon, and Buckland eagerly stands outside parliament alongside other Leave protesters who hold up their colourful banners. “My main issue is the politics, it’s anti-democratic. We’re communists, and we’ve always been against the EU.”

On the opposite side of the road Remain campaigners begin to chant. The competitive atmosphere between the Remain and Leave protesters causes the noise level to heighten. When asked what his thoughts on the European Union are, Buckland says: “They’re pro-war, pro-Nato, they destroyed Libya, Yugoslavia, Ukraine. It just won’t work.”

Walking along the pavement beside Westminster, to the George V statue, more and more people are gathered to express their support for the two campaigns.

There is a crowd huddled just at the foot of the statue with a mixture of Leave and Remain protesters battling to make the most noise. Campaigners march around the area with posters reading slogans such as ‘Leave Means Leave’ and ‘Treason May’.

John, another advocate for the Leave campaign, tells us: “The biggest advantage would be cheaper vegetables.” It comes as no surprise that everyone seems to hold a specific reason for leaving the European Union close to their heart. He also says it would be advantageous because then the UK could “do world trade deals.” 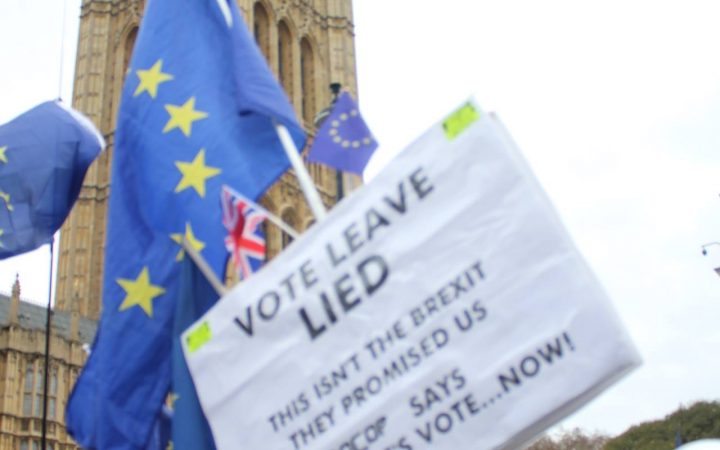 Protesters in front of the parliament [Hannah Dardis]

The subject of immigration is a widely-discussed factor with many Leave campaigners. When asked about this aspect John says, “my grandfather is an immigrant from 1890. He came over in 1890, but I feel I’m English.”

Another controversial element of Brexit is the potential of there being a hard border between Northern Ireland and the Republic of Ireland. Historically, this is a sensitive issue because of the tension that existed at the time of the Troubles in Ireland in the mid- to late-20th century.

The main reason the government is extremely reluctant to build a hard border between the Republic of Ireland and Northern Ireland is because of the Good Friday Agreement of 1998. The agreement played a significant role in creating peace in Northern Ireland during this period of the late 20th century, and if a hard border were to be considered, this lasting peace could be jeopardised.

When asked about this aspect of Brexit John says: “They’re making the border with Northern Ireland into a bigger issue than it needs to be. At the moment there is no problem, they just drive in and out all the time. The problem the EU is making is that they’re saying we’ve got to have no border, which they haven’t got anyway so it won’t make any difference if we were leaving the EU next week.” He adds: “most of the containers and things that are passing the border are still there and are still being checked.”

The information for the protest said it would come to an end at four, but as the hour approaches, there are no signs of the campaigners hanging up their banners for the day.

I approach an older gentleman, holding a ‘Leave Means Leave’ sign. He introduces himself as Mrs David Ottom, from Ashford in Kent. Ottom states: “The biggest advantage would be that we get back our democracy. We get rid of the unelected Bureaucrats in Brussels.”

Ottom has come here to parliament today, passionate about his home country exiting the European Union. He says doing so would be so beneficial as the UK “would have the freedom to make its own trade with other countries, without the EU deciding whether we can or not.”

Ottom also expresses his deep goal to stop “unsolicited immigration”, claiming that “immigration depresses wages. More and more people come into the country, if we get a surplus then the price goes down, and that’s all I can tell you really.” 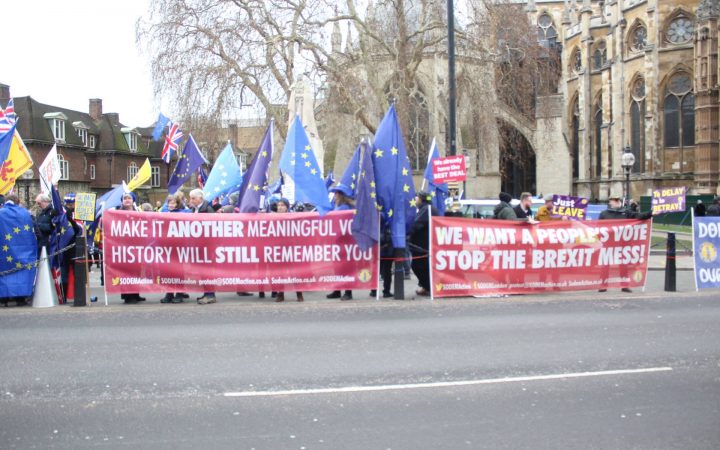 Mrs Ottom explains how this ongoing issue holds much more personal meaning to him and his family. His family is a military family, and “fought very hard, and lost three great uncles in the first World War. We lost two uncles in the second World War.”

His father was a Dunkirk veteran and got severely wounded there. Ottom recounts a story of an interaction between his father and him in the 1980s saying, “he looked from Dover across to Europe and said to me ‘The Europeans have tried to conquer us twice in the last 100 years. Now they’re going to do it a different way’, and I’m here representing my father’s wishes to try and stop them.”

Ottom echoes John’s views on the controversy of the hard border between Northern Ireland and the Republic of Ireland, questioning why it is made to be such a large problem. “I’m an electrical-mechanical engineer. I’ve been retired for a number of years now, but there are electronic means of controlling that border. If a vehicle is coming from Dublin into the UK, they can submit what they have on board, then go straight through the border, if they betray that, then they’ll obviously lose their license to do that.”

“It’s a two-way reciprocal thing. They can do it electronically. I think they can do that. They can land a man on the moon. I don’t see why they can’t do that.”

It is clear these men feel strongly that the UK should exit the European Union as soon as possible. It seems that the defining similarity that the Leave and Remain campaigners’ have is tenacity to their views.

Protesters holding up Remain signs were also present at the march. A few metres in front of the statue of George V where the Leave protest was taking place, stood a group of women wearing dark blue cotton hats with a circle of yellow dots to show their support for the EU. Others nearby could be seen using a large EU flag to warm up from the sharp London chill.

Although it seems that the future for the Remain campaign does not seem very promising, campaigners remain optimistic as they protested outside the parliament. 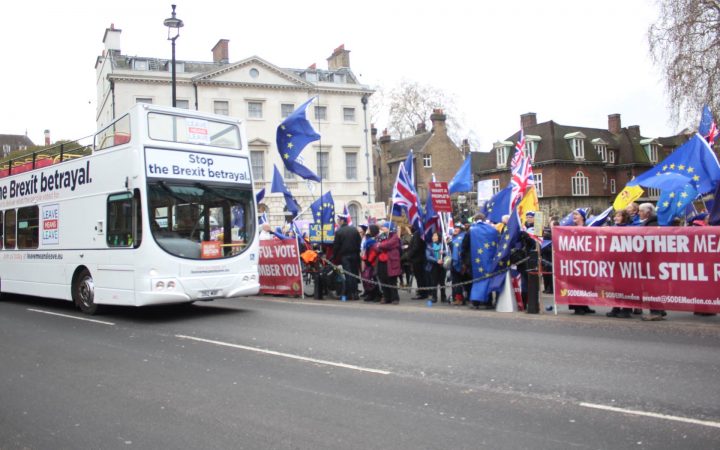 Fellow Londoner, and Remain supporter Stephanie Morris says, for her, the central reasons to remain lies with the future of her kids. “I want to stay because I have four children and I want them to have access to European universities. I also would like for them to have the opportunity to work and live in Europe, with everything that it entails such as free movement, health care, etc.”

Also at the march was Jamie Bohanna from Manchester. She feels strongly that the UK should remain. “We should be embracing other cultures, people and ways of life, not closing borders to them.”

Contrary to the beliefs of John and David, Bohanna feels like the UK is greatly benefitting from the EU. “The EU actually sends us a large amount of funding, and has supported parts of Britain when our government has not, Manchester post-IRA attack for example.”

Additionally, Bohanna believes the EU is an advantageous body for the UK to be attached to because of the security it provides: “The EU is the only thing that stops Britain doing anything bad since we don’t have a codified constitution, for human rights legislation etc.”

Edwards also wishes that the UK can remain in the EU for safety regarding aviation. “I use airfare very frequently, and I do not want to be worried about the potential of the aviation standards for safety being lowered.”

What often can occur during a period of political tension is an immense level of separation, and Brexit is no exception in this regard. Edwards says, “I think the current Brexit climate is horrible and divisive. I don’t think the media should be broadcasting it every minute of the day.”

“We should be embracing other cultures, people and ways of life, not closing borders to them.”

A major issue in the Brexit talks is what should be done about the Irish border. The former Taoiseach (Irish prime minister) Bertie Ahern spoke to Sarah Montague on BBCs Hard Talk about the on-going border discussions. Ahern stressed that placing any type of border between Northern Ireland and the Republic of Ireland would cause more of a hindrance than good: “The idea of a border has been controversial since the 1920s.”

When Montague asked about how volatile the atmosphere would be in the event of a border being placed, or even something as small as street cameras being installed, Ahern sternly reminded her that it is not so much the nature of the border as the principle of one being put down.

“I still want to believe that we would not return to violence, but I think the tensions, the animosity, the enmity, the bitterness, and hatred that bringing back any kind of infrastructural border cannot be ignored.”

All images by Hannah Dardis