“You get used to the noise. I remember, when I first started, it was so noisy I would be constantly on edge. It’s confined, even though it’s a huge wing that holds so many lads, all of the doors are locked.”

A 22 year old petite blonde woman, perhaps not the first image that comes to mind when thinking of a prison officer. However, 37.4% of prison officers in the UK are female according to the National Offender Management service 2018.

Having studied criminology at university Lauren* began her career in criminal justice through a program called Unlocked, a scheme which aims to attract high calibre graduates to work within UK Prisons. With the number of prison officers resigning dramatically increasing and many prisons being said to be “in a state of crisis”, Unlocked is one measure which is introducing skilled professionals into the system.

In what is considered one of the most stressful professions, figures from the Ministry of Justice released in 2017 confirm that many prison officers are suffering from stress – four times more than the national average in the workplace.

It comes as no surprise that officers have recently protested about working conditions and safety. Although walk-outs took place nationwide, Birmingham saw action by 100 members of staff. Members of the trade union for prison staff put the walk-out down to opposing working in “the most hostile environment workplace in Europe,” its chairman Mark Fairhurst told ITV.

Figures from The Prison Officers Association show an unprecedented decline in safety and security in prisons nationally with assaults against prison officers up by 108% since 2010.

Widely considered a male-dominated profession, what is life like as a young woman in masculinity fuelled environment, working with some of the most dangerous young men in Britain?

There is no doubt that a career in criminal justice is one of the most challenging, however, for Lauren, being a young woman in a young men’s prison causes the role to be significantly more demanding.

With the added challenge of not only dealing with stress and potential violence, Lauren is also faced with derogatory comments, stress over her safety, and the challenge of gaining respect from inmates her own age. Meanwhile, she tries to establish equality among male prison staff, something which she explains has not come easily.

“It is twice as hard, as you find that because it is such a male-dominated occupation and because of the culture within prisons, you have to fight a bit more for your voice to be heard. There are certain prisoners that don’t respond well to women.”

“As a young female, you have to make sure from the start that you set the tone, that you are in power.”

When asking Lauren about the difference between the treatment of male and female prison staff she replies, “the comments, they can be derogatory. It could be that they are trying to test the water to see if they can push the boundaries, so it is important to make sure from the start that you are nipping it in the bud before it escalates.”

Lauren believes that awareness is essential, especially as a young woman. Her luck in those comments is the extent of her issues within the prison. But this is solely down to her persistence in creating control and setting the tone from her first day.

“Being the same age is difficult, especially as a woman the boundaries need to be really clear. I’m at a greater risk of them trying to blur boundaries because they don’t get a lot of contact with females, so there are a lot of inappropriate comments,” she says.

“As a young female, you have to make sure from the start that you set the tone, that you are in power. Which is what I have done. I never allowed inappropriate comments to slip by. But being young alters the relationship because some of them don’t see that I have authority, a lot of them will question what I’m telling them to do as I suppose they feel; why should I listen to you if you’re the same age as me?”

“It’s care vs control which is a paradox that you are constantly trying to juggle while you’re in prison.”

Not only does Lauren find that creating authority between herself and the prisoners is more challenging as a woman, but so is earning her status among predominantly male co-workers.

“As a female officer you could be in the middle of restraint and as soon as a male officer is on the scene they will just take over from you without asking, they will just do it. Which can be quite frustrating when you have a good hold on the restraint. That happens a lot, and a lot of other female officers have told me that this happens to them. It’s almost like the male officers feel that the women can’t do it, so they need to help.” 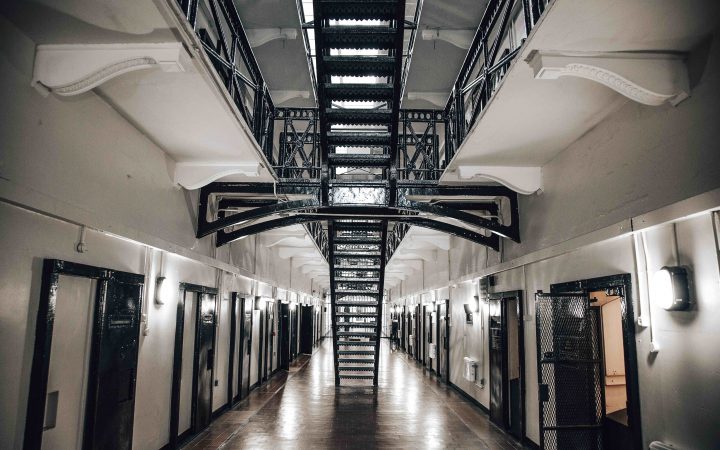 Lauren explains that when restraining an inmate with the assistance of a female officer, the male officers often feel as though the females don’t “have their back”. When using aggression to restrain they feel as though they have extra people to protect. Although the female officers seem to appear less forceful to both their male counterparts and inmates, Lauren uses her role as a more sensitive figure, free of competitive machoism to her advantage.

Perhaps surprisingly, this role allows Lauren to connect with the inmates and reach an understanding. Prisoners have nothing to gain from resisting female officers’ requests, whereas being compliant with a male officer would be equated with a loss of machismo.

In practice, Lauren explains how a non-competitive dynamic can allow her to control a high-risk situation. “One of our lads became very aggressive while he was coming out of the showers. He is a strong lad, far stronger than us officers so we were really struggling for quite a while to get a hold on him. I was trying to take control of one of his arms and there was a male officer on his other arm. I have a good relationship with the prisoner so he listened to me when I told him to release his arm. He let me walk out of the shower with it, whereas he struggles a lot against the other male officer. There was a definite change, he did it when I asked.”

The results of a 2004 Criminal Behaviour and Mental Health study, which examined the competence of prison staff based on gender, found that in the eyes of prisoners, female officers were more professional. They respected the inmate’s privacy and kept calm in difficult situations.

This, too, is perhaps true of Lauren, as she is able to maintain a calm manner in order to think clearly and overcome high-risk situations. Lauren explains the difficulty of juggling responsibility while on the wing, “it’s care vs control which is a paradox that you are constantly trying to juggle while you’re in prison,” she says.

“A lot of these lads are in prison for a reason, a lot of them have violent crimes, but you try and give them a chance.”

“You say one thing and you think another. In terms of rehabilitative conversations like encouraging their personal hygiene or persuading them to take a shower because they haven’t in a while because they have been depressed. But equally, you’re also thinking about security. It’s a strange place is a prison.”

The paradox of rehabilitation meanwhile maintaining self-protection seems challenging. Lauren explains how she often finds herself forgetting the violent nature of the prisoner’s crimes. Being in such close proximity to potentially dangerous young men, many with life sentences, Lauren seems almost un-fazed.

However, she does admit that there are still some elements of the job that are scary. “There are certain people that we get told to watch out for, we have alerts which depend on the type of offences that they have committed. There are a few lads that have alerts for female staff because their past has shown that they have assaulted women. It does run through your head.”

To overcome this, Lauren speaks to the prisoners as soon as they enter her wing to put her mind at ease. While this seems simple, Lauren reminds us that “a lot of these lads are in prison for a reason, a lot of them have violent crimes, but you try and give them a chance. It is such a contradiction because you’re thinking about where the next prison officer is but equally trying to give them the benefit of the doubt.”

While Lauren juggles personal safety and prisoner safety while maintaining a strict schedule where every minute is timetabled, it is no surprise that she admits that the stress is the most challenging part of the job. 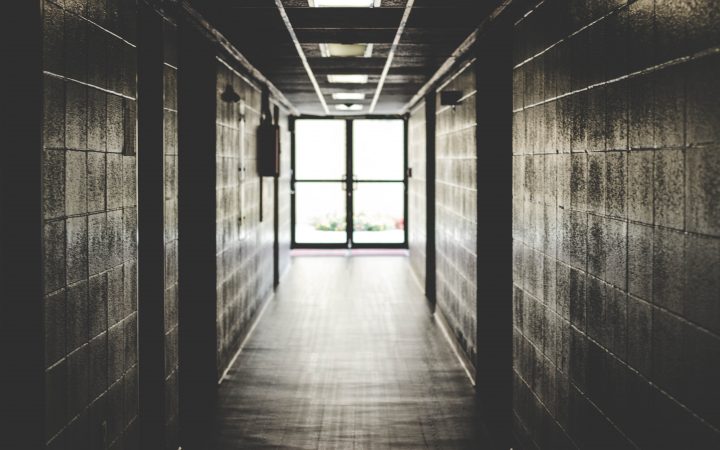 Prisons are designed to be intimidating [Unsplash: Christin Noelle].

As a wing officer, Lauren describes herself as the middleman, making it the most stressful role within the prison. This is significantly more demanding as a new member of staff. Due to the prison’s staff shortages, Lauren was thrown in at the deep end, by being placed in charge of the wing on her second week. “There is a lot of responsibility on your shoulders from day one.”

This pressure can lead many officers to look for employment elsewhere, with figures showing that one in 16 officers resigned in 2017 compared with one in 33 officers in 2015 and one in 100 in 2009/10. Lauren confirms that the increase is partially due to lack of support.

While this is a significant factor in high turnover rates, it is just one of the many factors. Prisons have experienced large spending cuts since 2009, causing the number of prisons to decrease while the number of inmates remains the same.

Official figures also show that assaults on staff rose by a quarter from 2016/2017, while the total number of assaults has doubled over the past four years. Not only are attacks on staff increasing, but violence is also shown elsewhere.

Self-harm is now being recorded every 12 minutes on average and violent assaults are occurring every 18 minutes, with 23 attacks on staff every day, most incidents involve young prisoners between the age of 18 and 20 years-old.

“I remember the first time I ever had to do the early start on my own and check all of the cells to make sure that everyone is accounted for. It goes through your mind that you might find someone in a state of crisis, I’m not sure I would know how to deal with it.”

Lauren began her career in prison with dreams of having an impact on all of the prisoners. Helping them in their rehabilitation is what motivated her to become a prison officer, she solemnly admits: “There just isn’t enough time and there isn’t enough staff.”

Although Lauren simply doesn’t have time to help every young prisoner on her wing, those that she does speak to help her to remind her why she started a career in criminal justice.

Despite the inherent threat and stress of the role, there is no doubt that it can also be one of the most rewarding.

“The first couple of interactions are always limited and gradually I will get a little more and a little more. Then by a month or so later you’re having a laugh and chats with them,” Laursen tell us. “It’s nice to see when the lads are having visits or doing work that benefits them and their sentence.”

* The contributor’s name has been changed at their request.