In the backstreets of Digbeth, Birmingham’s creative quarter, the warehouse-filled roads are usually quiet. However, outside of Muthers Studio, a crowd of people gathered by the dimly lit entrance for an event hosted by Papito Entertainments.

Billed as a night of garage rock and roll and psychedelia, four bands graced the venue’s stage. Amongst them was Ohmns, HAMER and Birmingham’s own Brain Food. However, the whole show was kicked off with a heavy set from local heroes going by the name of Cave Girl.

The quartet made up of Edmund Quigley on guitar and vox, Matt Holford on lead guitar and keys, bassist Richard James and Alex Moulton on drums, have been playing together for about a year.

Ed sauntered up on stage in a vintage suit and shiny white shoes, complete with a bolo tie and dark red lipstick. As they all took their place and a quick ‘alright’ was said, the guys laid down an instrumental intro. 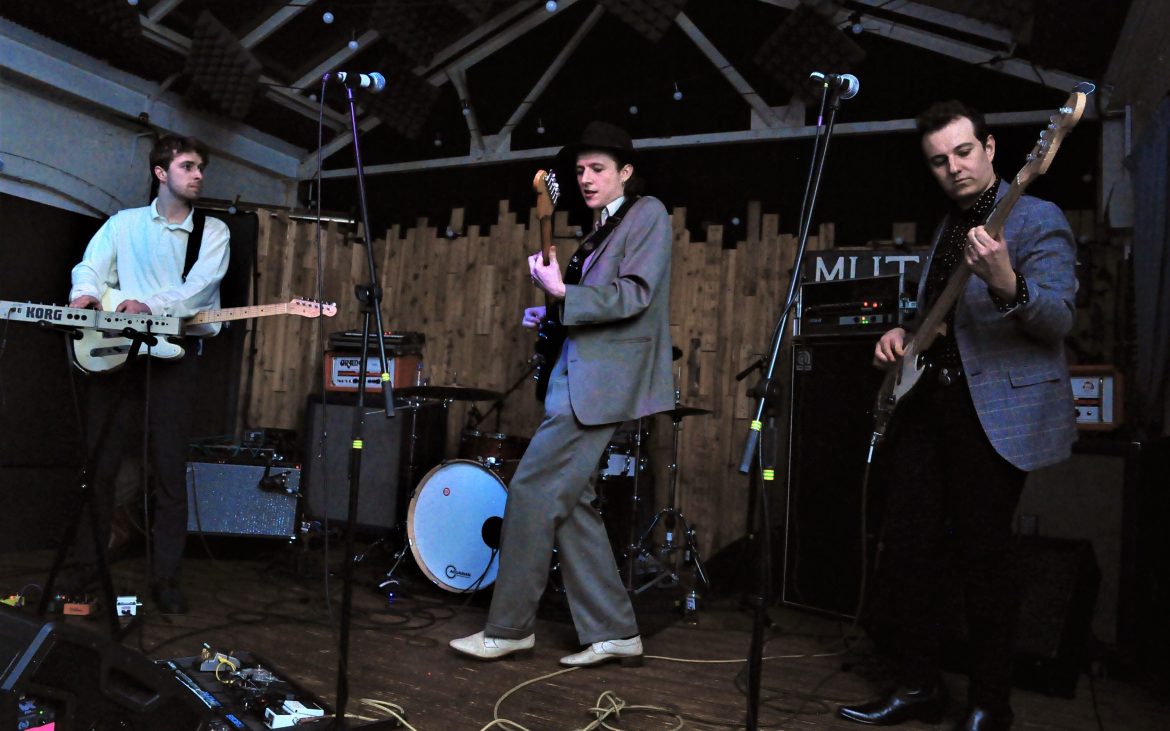 Lou Reed once said that “one chord is fine. Two chords are pushing it. Three chords and you’re into jazz.” The same principle applies to Cave Girl. Their greatness is found in the minimalist style. Over a heavy rhythm section, distorted three note riffs drove the songs at full throttle.

Maxed out reverb and elongated tremolo chords seeped California surf and Wild West twang. The deep vocals hinted at 80s Bowie as they delivered with a good deal of gasps. All that paired with numerous high kicks and their blasé attitude, the band oozed cool.

After their set, I caught up with Ed and Matt to find out what makes them tick.

The two boys have been friends for nearly a decade and played together in their previous project, Orange Vision. Though this time around, they are taking a new direction.

“With the last band, it was very much playing to the gallery. Whereas this Cave Girl thing is more what we wanna do, a sort of reactionary. If we do something and people like it, we’ll do it again. If they don’t then we’ll give it the chop, you know.”

Matt also added that the new band has a punk, garage element to it which Orange Vision did not. “The old band was completely indie kid music. I liked it, it did work but, I think our tastes have changed a lot.” 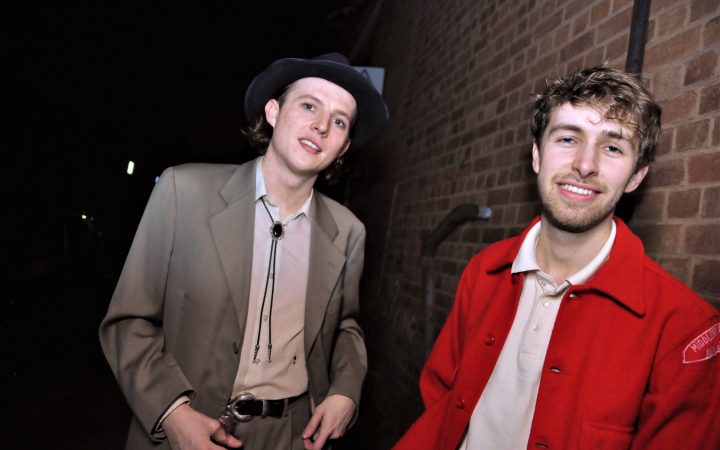 With the new group came a new line-up too. They were joined by bass player Richard, who also gigs with Birmingham’s punk outfit, Bad Girlfriend. Their drummer, Alex, became a member when he approached the guys at a house party.

“Alex is an absolute gift of the gods,” said Ed. “He lives in Sandbach but he comes down for every practise or gig and he’ll always turn up on time. I didn’t think he’d be up for wanting to make the effort, but the man is more money than sense, so he has, and thank God for that!”

And so Cave Girl was formed.

Ed had been humming and hawing about what to call the band for a while, until one day a co-worker came into work hungover and said she thought she looked like a cave girl.

“We thought that was okay and we just went with that and also, the whole thing is kind of a positive step forwards in androgyny and in whatever, I don’t know.. but it wasn’t thought out to be that. Kind of hypocritical actually saying the gender is over.”

Matt then added, “well one man is slightly androgynous, and the rest of us are just there.”

The line he referred to was from their first self-titled single which boasts ‘the gender is over, the gender is dead and I’m not the only one with eyes in my head.’

The themes of their songs cover a lot of ground. From sex and relationships to footwear and fry-ups. Most of them stand for what they say in very basic forms. They are not looking to make big political statements or hidden meanings. Their attitude is that if you are going to have something in what you are saying, it is a good attitude.

The nonchalant, anything goes approach with the songwriting keeps them grounded. “We played Greasy Bastard tonight, a song about me fucking a fry-up, you know, so that’s good, but then again, that’s just because I don’t want people to think that we take ourselves too seriously. Although that was a pretty serious rendition!”

“I can never just sit down and write. I can only really do it when I have no time. There are about 102 voice memos on my phone of when I’ve been on a bus just humming a tune like a fucking maniac. Then I started recording actual crazy people on the bus for a while. On the number 50 back to Kings Heath you always get gold.”

However, the guys say that their music and themes are always changing. There is never a plan. Sometimes the lyrics come first and the music is made around them, sometimes it is the other way around.

In fact, their set was contrasting from one song to the next. Whilst they have a signature sound, the diverse material stops them from falling into a single category. “At the moment it’s a sort of pop, post-punk glam. Garage glam, glarage. I don’t know what it is anymore.”

They say their latest inspiration comes from the likes of Ty Segall and The Replacements which is resulting in a heavier and unpolished sound. Matt’s incorporation of a keyboard came after listening to bands such as Insecure Men, who converted from guitar to keys. This influence helped them achieve new sounds through the use of samples and experimentation.

“We have this attitude that we can go wherever we want with and that’s the joy of it all. As we go on and we do more things, we might get more anchored to one sound but for the moment it’s exciting and it still feels new.”

For the time being, Cave Girl has only been playing Birmingham gigs with the exception of a show at Jimmy’s in Manchester. However, none of it is in vain, as their love for the second city is reciprocated. Their plans for this year include branching out and playing new cities while keeping on top of churning out new tunes.

As for the future, their aim is to solidify their reputation in the Brum music scene. Matt’s expectations are “not really the fame and fortune necessarily. That’s not our whole thing. It’s more about being part of something. Everybody wants to be part of something, especially if in any respect there’s a hype around it.”

While Edmund said that “everyone should aim big and try and be as big as they can be, but I’d like to be sort of festival big, that’d be alright, like small letter festival? Well, like respectable.”

As our chat was coming to an end, we discussed the possibility of finding a label. The response:

“Yep! that would be nice, that’d be good. Just anything, man! If you’re reading this, just manage us. Just contact us. We need order in our lives!”