The shudder of the transit van’s engine runs through the seats layered in a blanket of dust. The driver, bacon sarnie in one hand, steering wheel in the other, driving past a woman with her kids, *BEEEEP* *BEEEEP*, “Fucking hell, look at the pair on her,” a massive grin as he stared me right in the eyes hoping for laughter, I crack a smile to ease the tension.

At the age of eleven, the summer before starting secondary school, I remember my dad paying me £10 a day to go to work with him, waking up at 6:30am, getting to the site for 7:00am.

The day usually consisted of me following one of the workers around, sometimes my dad, other times his colleagues, sweeping up after them, carrying buckets to the skip and handing tools to the tradesmen if they were on a ladder. The days were fairly long, finishing at 5:00pm, getting home for 5:30pm, with my mum having food on the table ready for when we pulled in to the driveway.

I didn’t particularly enjoy going to work for my dad, surrounding myself with a bunch of grown men, with the most frequent topic of discussion being about girls, but as an 11 year-old, I was far behind the conversation. Everything was sexualised, seeing a woman in the streets, sexual remarks were made. Usually not for her hearing, but occasionally. 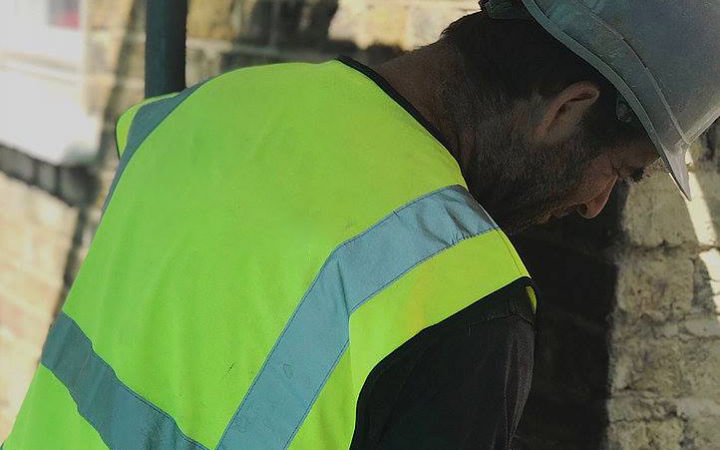 A builder examining a wall for cracks [Connor Taylor-Parton]

I felt uncomfortable, I didn’t understand it. Being addicted to gaming at the time, I would have much rather stayed at home playing video games.

Regardless of what I wanted, in my dad’s mind, that wasn’t an option. If you sit at home doing nothing all day, you get nowhere in life. So, the options were pretty much chosen for me, go to work and earn money.

The talk of a female body like it was an object, the conversations and questioning I’d receive off some of the builders remarking my sexual history with females, the connection amongst tradesmen lacked open-mindedness, emotion and closeness. If someone had issues, we never knew of them. Or if we did then it just wouldn’t be talked about assuming they would manage to overcome it themselves. Thoughts being; we all have our own issues.

Toxic masculinity, exposed to it from the age of 11, it was something I was far too familiar with but didn’t feel represented me. But, who exactly does it represent? I wanted to find who actually identifies with it, so I headed back to a building site, where it all began.

The roar of diggers on the far side of the plot of land. Radio one live lounge bursting through the speakers of a Dewalt radio coated in dried plaster.

Three tattooed, topless men, on the scaffolding yelling “Oi oi, look who it is,” as they put down their hammer, removing the two-inch nails, gripped by their chipped cigarette-stained teeth. I shook my head and approached with laughter as I squeezed down the narrow opening alongside the van on the driveway. 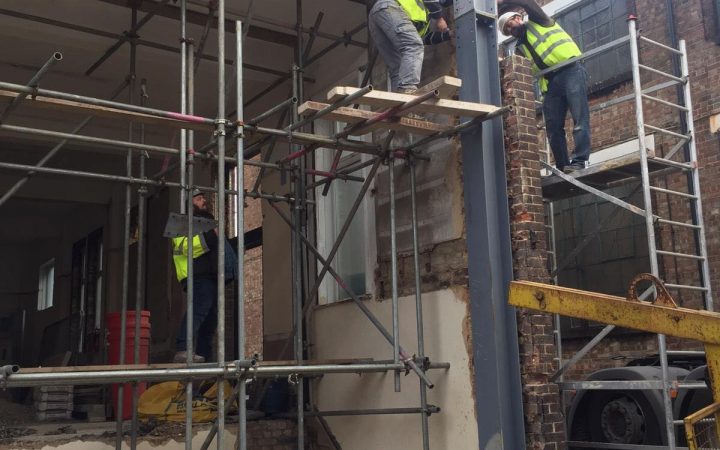 The best time for someone to open up is with a builder’s tea at hand, so I headed for the cafeteria. I boiled the kettle, grabbed four tea-stained mugs, dropped a bag in each and added heaps of sugar.

The sound of the teaspoon scraping the bottom of the mug in a figure eight motion really hit a nerve, perhaps because I was slightly nervous to how they would take the interview.

Andy, the first guy to walk into the office, was like a dad to me. He was the most down to earth guy I’ve ever met, he was the only one I ever felt I could open up to, given that he went down rough paths growing up, he always had good answers.

I asked him about his life, how he ended up here and whether he is happy with his choices, he traced back to when he left school: “I worked for my mate’s shop stacking shelves for a while and later went into warehouse work.” From a young age, he was never close to his family, he just wanted to make a living, go out with friends, socialise and meet new people, and repeat.

He surrounded himself with a variety of people, some gang members, other family men, he says “some of them were as hard as nails, you wouldn’t get on the wrong side of them.” He never really had anyone to point him in the right direction if he did wrong, “I was surrounded by people who knew no good, they wanted money and to be successful, and would do whatever they had to do to achieve it.”

Regarding his actions to women, Andy would often flirt or what not with women, but he argues “this was just something that is old school, 30 years ago, it was just how you interacted with girls, you didn’t have social media to meet someone, you just spoke to them, often started by flirting or making a joke, nowadays you flirt with someone and you stand a chance of getting reported.” 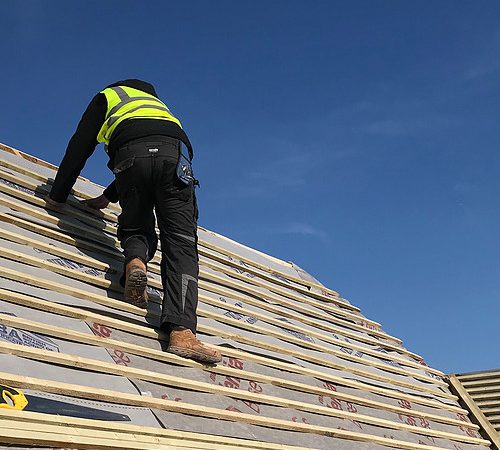 A builder laying felt and nailing laff onto the joists to form the roof. [Connor Taylor-Parton]

The rest of the builders soon came in and sat down, joining the conversation, “it’s a different time, these things were considered normal and nobody took offence to it back then, but now they do, things are changing,” the electrician states.

I explained the definition of what toxic masculinity is, they kind of looked at each other in a way they all have either took part or witnessed the presence of it.

“That’s true,” Andy replied, “men are looked at funnily if they do show emotion, they are kind of deemed to always show sexual behaviour, catcalling happens often in the building trade, I’ve never done it, but I’ve seen those around me do it, but they do it more in a joking way, not as a threat and most the time they don’t actually mean anything by it.”

“it’s harmless, they’re taking it too seriously, it means nothing,” came from one of the builders, Andy did respond to that comment, repeating concerns his wife had told him previously, “well, to be honest, we may see it as harmless, but they don’t always, my missus gets cat-called, and when she tells me about it, she always tells me her worries that may follow when she ignores it and carries on about her day.”

He adds: “While it probably seems like a joke to us, to women it can be frightening, rape and sexual assault is a problem everywhere, just put yourself in their shoes.”

They kind of went silent, in a sort of agree to an extent, but not seeing it as a big issue still. I follow on the topic of emotions. I asked whether they think it is an issue that men don’t talk about their problems, they all nodded their head simultaneously, taking a sip at the same time of their tea, reluctant to say the first words, silence filled the room.

Maybe if they seeked help things would be different.

I pushed on with the discussion, I knew Andy had something to say and looked at him to lead the dialogue: “Yeah, I mean, everyone has that side to them, we all have issues, and men are likely to deal with them themselves instead of speaking to someone, whereas women tend to speak to each other.” He agreed it was a problem.

I showed them statistics highlighting the problem with men’s mental health, they raised their dust-covered eyebrows in shock; “I knew it was a problem, but maybe not on that scale” replied the sparky.

Andy’s face lit up, a thought came to mind, “I have lost a couple of friends in my twenties but thought it’s obvious they just mixed with the wrong crowd and their lives were a mess. Maybe if they seeked help things would be different.”

The room filled silent again, everyone clearly fighting their thoughts, whether it was flashbacks of their previous struggles or signs of a friend that has had issues. Still hesitant to say anything, the topic left a mark on each and every one of them, each in a different way.

“Right, enough of that sad stuff, let’s get back to work,” comes from Andy, a smile, and a firm gripped handshake to say farewell followed.

Featured image by coombesy on Pixabay

There’s nothing toxic about masculinity