Almost two years after the Grenfell Tower fire claimed the lives of 72 residents, a tree has started growing. The seeds first sprouted in New York on the grounds of what was once the World Trade Center, and now continue to create life around the world.

They are a symbol of hope and unity after the lives of innocent individuals were lost in disasters that should have been prevented.

The mainstream media are one of the key elements in creating awareness and social change on the relevant topics within our community, yet it has chosen to go mute for the victims and survivors of Grenfell.

It has also failed at a time where families are still to be rehoused, fire and building regulations are yet to be changed, and justice and accountability have still not been served.

Justice 4 Grenfell (J4G) started in the basement of a flat and initially acted as an information centre in the days following the fire. The organisation helped those affected in ways that included assisting families who were looking for their loved ones.

It also provided the victims with clothes and translated leaflets provided by the council, since English was not the first language of all the residents. J4G also acted as a pillar of strength during a time of bereavement and tragedy within a society who were owed more support from their government.

“There was a need for the community to take control,” said Tasha, who has been actively involved with Grenfell since the day of the fire, and now commits her days to the continued fight for justice. “We’re all community members, so we all knew what the issues in our community were already. It’s social cleansing, it’s stripping our community assets, it’s all of these things.”

The mission for J4G quickly progressed from being an initial point of help into taking a political stand, and it became clear that the larger newspaper publications were not using their voice in support of the victims and survivors.

“Right at the beginning of the campaign, before I’d even joined, a mainstream newspaper ran a piece calling Justice 4 Grenfell agitators. So, if you type Justice 4 Grenfell into Google, it’s the second thing that comes up. The Daily Mail too, even if it doesn’t seem like they’re trying to put you down, it’s done in a really clever way. For example, when we released our billboards, The Daily Mail was the only ones calling it a stunt, when everyone else was calling it a piece of protest.” 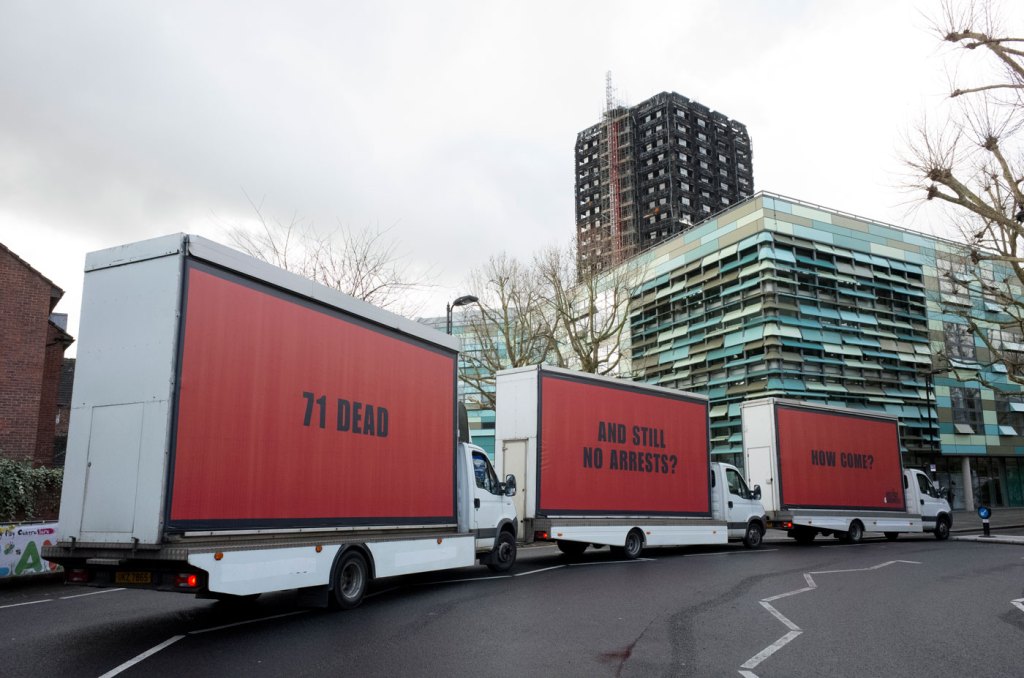 The three protest billboards which demanded justice and accountability for the fire,[Justice 4 Grenfell]

It came down to J4G to produce their own content and share the truths that the media were not. “We try to write opinion pieces and upload them to our website. Whether that’s Yvette Williams, who is our campaign coordinator and a really good writer. She used to work in the crown prosecution service, so she really knows the law. I personally use Twitter, Instagram and Facebook” said Tasha, highlighting the importance in the role social media has played to empower the voiceless.

“So many people want to help, people will send you a message on Instagram asking to donate or get involved. You just have to search the #Justice4Grenfell hashtag and you’ll find people who have made poems or songs, and I’ll reach out to them and ask them to send it to me. I don’t think as a campaign we would function if we didn’t have social media. I just don’t think we’d be able to reach as many people as we’re able to reach now.” 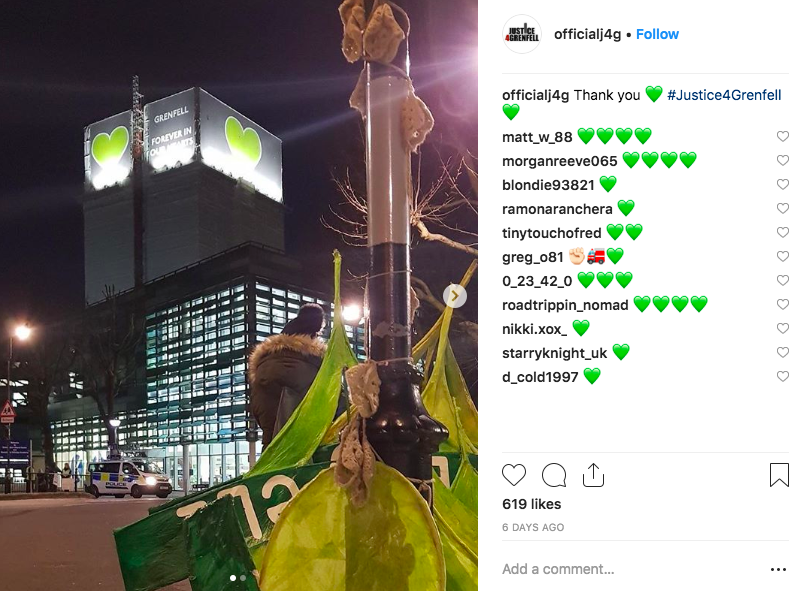 J4G are most active on their Instagram platform [Instagram@officialj4g]

Tasha explained to Artefact how all of those involved with Justice 4 Grenfell handle the press and media. “We all try and write pieces, whether it’s for the Metro or The Independent. We’re such a small team, there’s only four of us, so we all muck in.”

She highlighted the importance of communicating and remembering the message, even at times where anger and emotion have overruled. “On the morning of the fire before all of this was even set up, I did a piece for the BBC. I was so angry, and I just needed to go and express how angry I was, but I was in shock. When I watch it back now, I know that’s not me.”

It has been key for J4G to generate its own news, including the three billboards displayed outside of the towers eight months after the tragedy. “The three billboards were our form of protest. It said, ‘71 dead, and still no arrests, how come?’ We didn’t want the police to overnight go and arrest loads of people, what we wanted was a really thorough investigation. For us, it was about trying to bring the narrative back to Grenfell.”

It has been no secret that the north and south divide of the Kensington and Chelsea borough has remained at the core in the aftermath of the fire.

“The council, for as long as this borough has been a borough, has treated the north of the borough completely different to how it treats the south,” said Tasha, emphasising the lack of change and approach the council has continued to take since Grenfell.

“The fact [is] that the council are still treating the community with contempt, whilst saying they want to work with us, but they’re using the same methods they were using before the fire. So, nothing’s really changing,” she said. 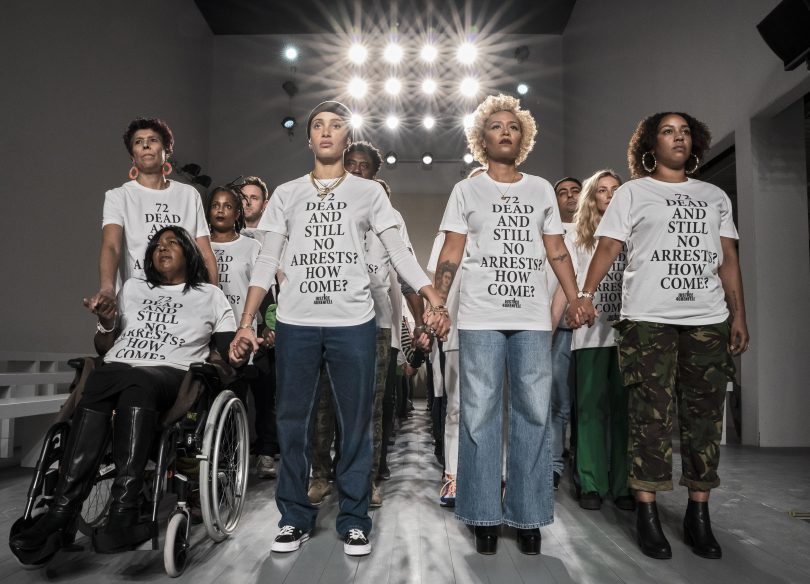 “With time, as humans in this current society, we kind of jump onto the next news story. People forget that Grenfell was only a little over a year and a half ago” she said.

“We want people to remember that some of the survivors still don’t have homes, even though Theresa May promised at the beginning it would be three weeks. The last funeral was in September of last year, which was 16 months after the fire. A family has had to wait for the remains of their loved ones. How do you mourn and move on?”

The community continues to strive for their basic necessities, such as the local library. “We’re having to fight so that universal credit doesn’t impact the families who are already suffering from so much. We’re dealing with suicides now that the adrenaline has gone, and you have to leave your house every day and remember what’s happened.”

“Grenfell, in some way, affects every single one of us. Whether you privately rent, whether you are in social housing, or even if you own your own house. It affects us all, because of building and safety regulations and cuts to the fire service. You want to know that your home is safe and protected” continued Tasha.

“There are 361 towers across the UK with the same cladding. They’re schools, universities, hospitals and tower blocks. The Government has banned the materials, but what about the places that have already been built with them. Look at the way the government has responded, how would you feel if that was you?”

As I look out over Grenfell Tower from the balcony of the offices that Justice 4 Grenfell operates from, it is hard not to be overwhelmed by the strength and unity encompassed by all those involved in the campaign.

As a society, we are quick to disconnect ourselves from issues as if they will never impact us, but the truth of the matter is that they could. The unpredictability of our future is the reason why we must fight for what we deserve from our government. It is the reason why we must unite and support one another and show the power we have as a society.

The 72 deaths of the victims of the Grenfell fire will not be in vain, and it is individuals such as Tasha and those at Justice 4 Grenfell who are a reminder of this. They are a symbol of the pure and selfless intent within many of us, amongst a world plagued by violence and hostility.

You can show your support by participating in the walks of silence which are held on the 14th of every month. More details on the  Justice 4 Grenfell website