“He started to hit me, he slapped me on my face, my leg, on my wrists and my ribs. The funny thing is my whole family was watching me and no one was helping me. This was normal to them.”

This is the story of Amna, an 18-year-old student of Iraqi descent, living in Indiana. After being promised a holiday to Dubai, it became clear that her parents were in-fact flying Amna to Karbala, Iraq. In an attempt to ‘fix’ her new-found Westernised views.

Karbala, located 62 miles (100km) south-west of Bagdad, is a site where tens of millions of Muslims visit on pilgrimages annually. Amna describes it as the most religious city in Iraq.

As the second largest religion worldwide, Islam is generally considered to require absolute commitment. But, there are many young Muslim women just like Amna highlighting both their freedom and their suffering through social media. Forming an online support network, where they can confide in one another.

“Sometimes I feel that people think that this situation only happens in Saudi Arabia. But It happens in almost every country in the Middle East”

Many of the women speaking out via Twitter are living in Western countries. Having become accustomed to this lifestyle, they seek to adopt the cultural norms, at the objection of their family.

Rahaf al-Qunun was one of these women, recently catching international attention. The 18 year old was fleeing Kuwait, trying to reach Australia via Bangkok but became stranded. The young Saudi girl used social media to get help. Rahaf was unable to return home for fear of being killed as she had publicly renounced Islam.

Both Amna and Rahaf are 18 years old, although the details of their stories differ, both young women have suffered as a result of renouncing Islam.

Amna is very aware of Rahaf’s story: “We are both 18, we both went through the exact same situation but I was unable to stay public on social media to receive the help I needed. I was in danger of being attacked further by my family,” she says. “Sometimes I feel that people think that this situation only happens in Saudi Arabia. But It happens in almost every country in the middle east.” 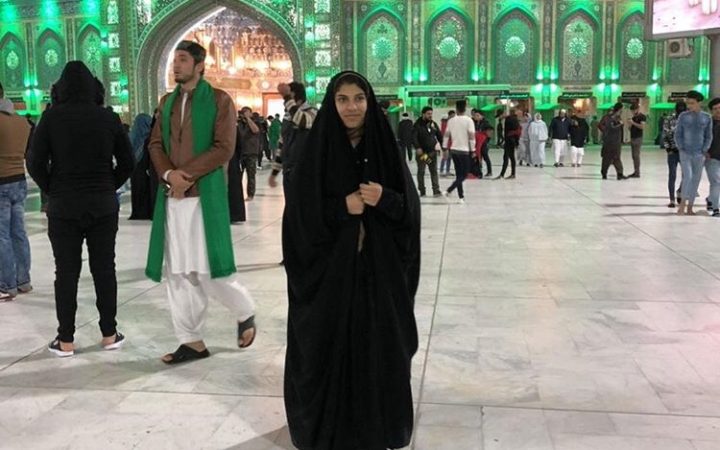 As I speak to Amna from the safety of her friend’s home in Indiana, it becomes clear that it is not only the distress of her time in Iraq which is ingrained in her, but as are the memories of her family life before renouncing Islam: “My entire life my household was always tense, my parents forced me to wear hijab, I obeyed them because I didn’t want them to abuse me. When I turned 18 I noticed that things were getting better, but at this point my parents were manipulating me.”

When Amna signed up to study in Costa Rica, her parents urged her to stop working as they promised to fund the trip, upon reflection Amna now recognises that this was just one of the many ways they were controlling her: “They didn’t want me to save up money in case something did happen.”

A month after opening up to her parents about her plans of travelling to Costa Rica her father booked a trip to Dubai. Initially, to the excitement of Amna she suspected a change in her parents, perhaps her new-found adulthood was the reason. However, this trip to Dubai was a trip to Iraq on a one-way ticket.

“They would begin to lock the rooms regularly, there are keys in every door and they would lock me in.”

“Looking back, I question why I didn’t check the ticket, I trusted my family and didn’t expect to be deceived like this. Leaving my home town seemed like it would not be forever, we left all of our belongings in our family home, nothing seemed out of the ordinary.”

Arriving in Iraq, Amna instantly noticed remarks regarding her religious dress, the tightness of her hijab and stray baby hairs escaping presented a relentless cycle of remarks from family members. She tells me that these small elements of control were nothing new, but they were just the start of authority being imposed. 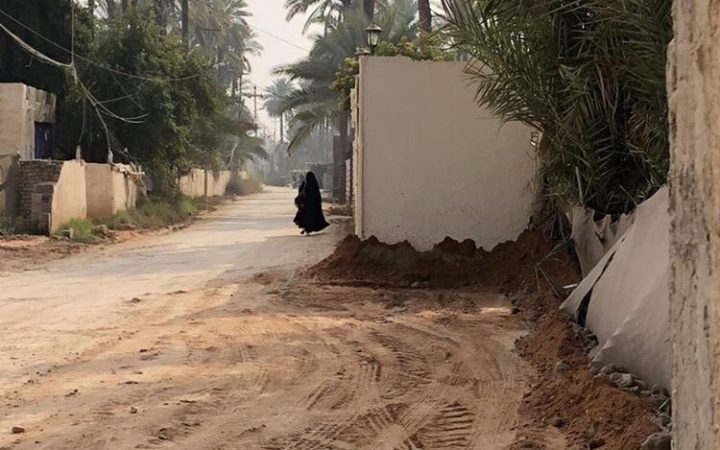 Not long after, Anma stopped leaving the house. “I was told that I would never leave their house unless I was accompanied by a male. I started going out and seeing friends. My dad started to notice that I was spending time with family friends and he wasn’t happy.”

Amna continues: “My parents started to become more controlling. They would begin to lock the rooms regularly, there are keys in every door and they would lock me in my room. One time a man came to the house to fix the Wi-Fi and they locked me in my room because they didn’t want me to see him. I couldn’t even go to get water without wearing a hijab, I would run out and run back to my room. At some point my mental health became so bad that I really didn’t want to leave my room, even if I could.”

Amna was becoming increasingly worried for her safety, so she contacted the American embassy. But in order to receive any form of assistance she had to make her own way to the embassy, located in Baghdad, a two-hour drive north of Amna’s father’s house in Karbala.

As a young unaccompanied woman, this proposed a real danger. Speaking broken Arabic and having no money meant the journey would be even more of a challenge: “If you get into the wrong cab in Iraq and tell them that you’re American you can get kidnapped or killed.”

Asking her parents about their trip to Dubai, it became clear that Amna was never going to leave Iraq, “My mum told me that we were staying in Iraq forever, she promised that this life would be better for me and my siblings. Staying in Iraq would help me to be more religious, it would ‘fix’ me.”

After the confirmation that Amna would be staying in Iraq against her will, she took to social media to seek help. Creating a Twitter account and Go-fund-me. Within 24 hours of making the accounts Amna raised $5,000, to fund her escape from Iraq.

Although Amna received support through social media, the publicity that liberated her online, trapped her further in Karbala. “I was in the same situation as the Saudi girl but because my family saw my activity on social media before I could get out, I had to disappear,” she says.

Amna describes the moment that her parents found out she was seeking help online: “I was asleep, they barged into my room at 4:00am and started asking me why I was ruining their family. I was looking at my father, and I said: ‘If you kill me you’re going to go to jail.’ He started to hit me, he slapped me on my face, my leg, on my wrists and my ribs. The funny thing is my whole family was watching me and no one was helping me. This was a normal thing to them.”

“The next morning my brother drove six hours to me because he saw the go fund me account. The first thing he did was slap me across the face and then he dragged me across the floor. He stood over my head and made me delete all of the accounts. What was strange is that he said that Dad could go to jail for kidnapping, but they kidnapped me.” 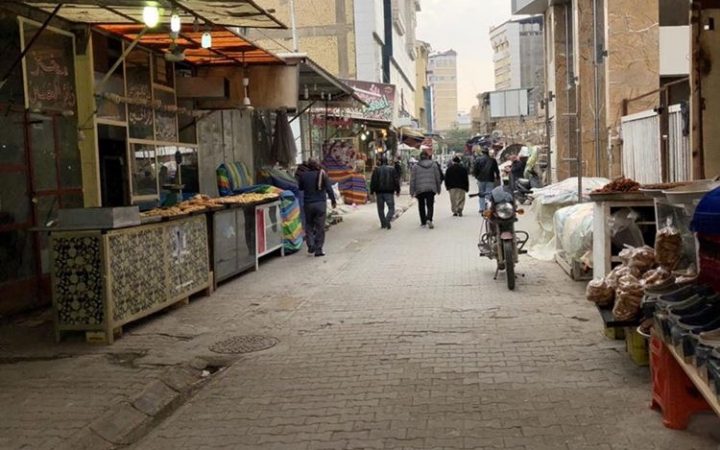 Amna’s phone was taken, and with it her contact with home and her chance of escaping Karbala.

A few days passed, Amna spent each one locked in her room: “I would just stare at the wall until I fell asleep.” By complying and profusely apologising Amna managed to persuade her parents to retrieve her lifeline out of Iraq; her phone.

Waiting until the afternoon, Amna left her family and headed to the embassy. “I was in the kitchen, the children were at school, my uncle was asleep and my aunt was in the shower, while sitting at the kitchen table I saw that someone left the door wide open and thought, should I just run?”

“I thought, this could be my last opportunity. I went upstairs grabbed a scarf and my purse. Within five minutes of walking a taxi pulled over and asked me where I wanted to go.”

Equipped with little knowledge of the location of the embassy and no confirmation of appointment, Amna was vulnerable. “It was terrifying. For me, this was the hardest thing to do. I probably shouldn’t have got into that cab but I was so desperate at this point my heart was shaking. The driver started asking me questions; ‘Are you Syrian? Are you Yemeni? Are you Saudi Arabian? Do you work at the embassy?”

“I had so much fear my entire life, I could never speak up for myself, now I can finally leave the house feeling like myself for the first time”

Amna pretended to be asleep for the duration of the two-hour journey, after arriving at the checkpoint she was greeted by Iraqi Soldiers, after explaining the pressing nature of her emergency situation. Amna was instructed to return home to Karbala and return the following day, but she tells me “I realised there was no way that I could go back.”

“I begged them to use their phone to contact the emergency line. A shuttle bus then came and got me, I was happy that I made it there before my family figured out that I left the house.”

The embassy retrieved Amna to safety, although unable to disclose the full extent of the support offered by the embassy, she was out of Iraq within 24 hours. “It was like an action movie.” 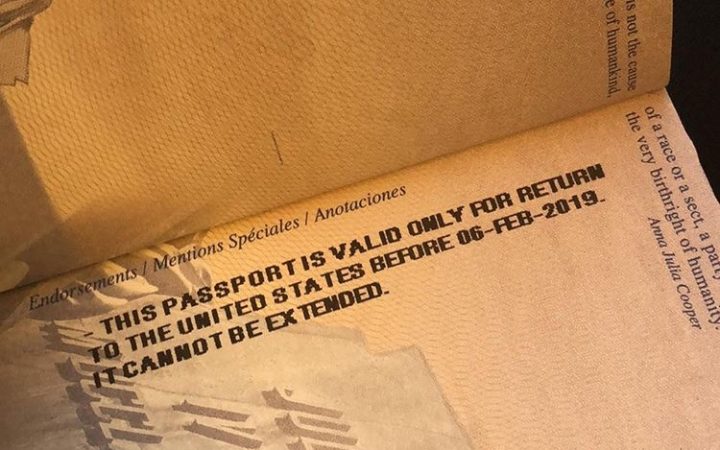 An emergency passport issued by the US embassy [Amna]

Now living in the USA, Amna is receiving support from friends and her university. With no source of income, her university are providing free housing and free tuition. But with new-found freedom comes, loss of family’s privilege.

“I had so much privilege and my parents had so much money and now I have nothing.” Despite this, Amna states that freedom is all that she has ever wanted her entire life, “I feel so much freer, money isn’t everything.”

Amna’s liberation, in her words felt like “a weight has been lifted.” Back on home soil, she is now enjoying the normality which she was deprived of as a child. Simple activities like, wearing make-up and using social media were strictly forbidden, even spending time with friends was restricted.

Amna’s strength is profound, upon telling me heart-rending details of her story she expresses almost no emotion, something which she puts down to her time in Iraq, making her numb. “I laugh at the situation to hide the fact that I’m hurting, it’s painful but I can’t even cry anymore.”

Amna’s story is merely thread in a complex tapestry, as just one of many young women struggling at the hands of apostasy she tells me, “I know a girl that was stuck in Palestine for five years, someone else messaged me from Iraq, and of course the Saudi girl. A lot of people reached out through Twitter, I realised that I wasn’t the only one that had fear my entire life.”

It should be made clear the abuse that Amna suffered was not caused by the teachings of Islam. Although faith can provide morality and solace, the Islam practised in this case was perhaps not one of morality but without understanding.

Fiyaz Mughal, writing in the New Statesman, says that Islamic practices can be manipulated to become “about punishment, pain and barriers, rather than enlightenment, openness and the nurturing of creative thought.”