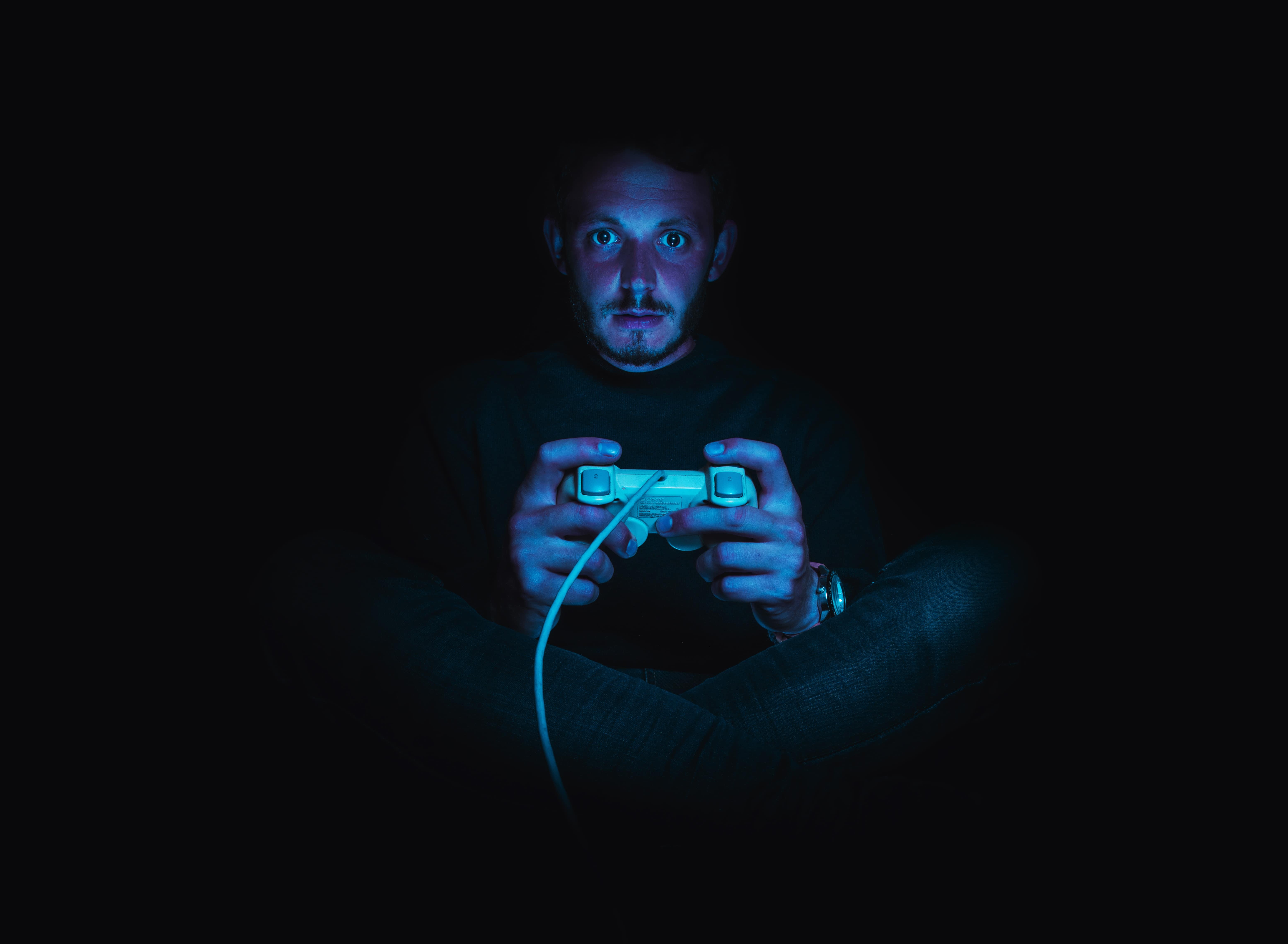 YouTube is home to a myriad of Fortnite gamers posting their gameplay from Twitch streams and gameplay specifically for their channels. One thing that has become apparent; these male gamers aged between 16 and 25 years-old have a habit of bullying younger players.

Last year, 2018, saw the rise of the online game Fortnite Battle Royale, a player vs player game mode created by the American gaming company Epic Games. Pitting 100 players against each other in a fight for first place. Players must eliminate each other in order to be the last man standing, earning yourself the ‘victory royale’.

“Because players are anonymous, they cannot necessarily be held accountable for their behaviour”
Stop Bullying.gov

The game comes with features such as limited time game modes, duos, squads, and playground mode. Playground mode gives players 50 minutes on the map to play around with weapons and other friends. In ‘duos’ and ‘squads’, players can connect with their friends and play the game against other teams. These game modes also come with the option ‘fill’ and ‘don’t fill’, meaning they can be put in a game party with random players in the server who also chose the option of fill.

The most prolific Fortnite YouTubers are creators such as ‘Ninja’, ‘Ali A’, ‘Muselk’, ‘Lachlan’ and ‘Lazarbeam’. The toxic masculinity displayed by some of these creators and other players in the community is shocking.

The need to flex on other players with their ‘skins’ in game, either given to them exclusively before their release in the item shop by Epic Games themselves or even bought using the in-game currency of ‘V-bucks’, which are attained by using real currency to purchase them. For a game that is played by a variety of ages, flexing a skin purchased seems toxic as not everyone has expendable money like these YouTubers and adults with jobs. 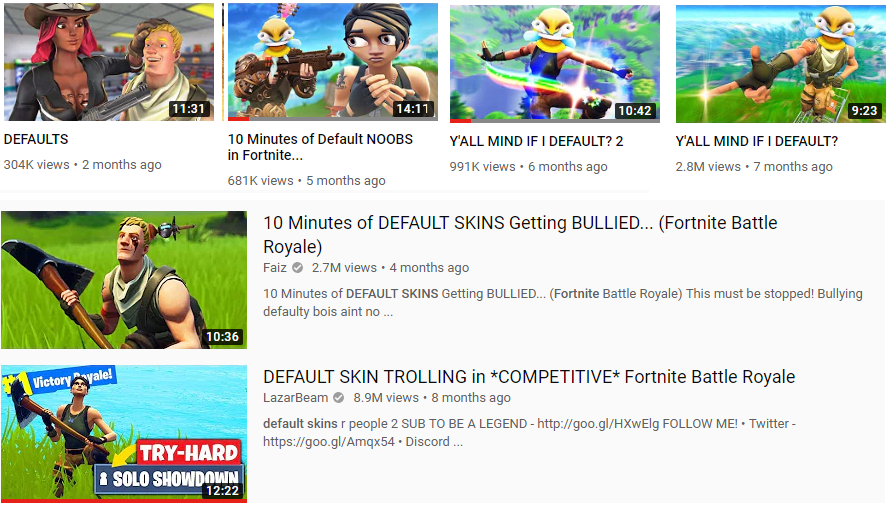 The community even started to hate on people using the ‘default skin’ and nicknaming players who are visibly new to the game ‘noobs’. The game comes with ’emotes’ and dances that players use in the game to taunt ‘noobs’ and players after they have been eliminated.

Just like the weapons in the game, the skins, back bling, and gliders all have a rarity rating with a corresponding colour. Starting with grey signifying the ‘common’ rarity, moving on to green being ‘uncommon’, blue meaning ‘rare’, purple meaning ‘epic’ and finally gold meaning ‘legendary’.

The skins that can either be bought or earned in the game come with the same rarity ranking system. The skins that are rare are often donned by gamers to flex on other players. For a game that can be played by a range of age groups, in-game purchases appear to be more appealing to those players with more disposable income.

There are countless hours of footage on YouTube of players bullying each other for either not being good enough at the game or for having the default skin. It has even reached the point where players with certain skins are associated with being good or bad.

One video in particular that stood out was posted by an Australian Fortnite YouTuber ‘Joogie‘, who has a subscriber count of 500,000. The video is titled I helped a 10-Year-Old Girl DESTROY TOXIC BULLIES in Playground.

In it, Joogie enters playground mode with the ‘fill’ option on. The video currently has more than 6.7 million views. He enters into the game with two ‘fans’ and a young girl. Throughout the video, the two other boys in the game become more and more toxic towards the young girl and eventually turn on the Youtuber himself.

He starts off the introduction to his video by saying: “Occasionally, as you guys probably know you get some toxic players who don’t quite understand the meaning of playground.”

When addressing the two male players “fanboying pretty hard” Joogie said: “I don’t mind meeting fans in the playground and I’m usually friendly to them, however, these guys were just griefing this girl so I decided to team up with her and help her fight back.” Joogie exhibits his dislike for Fortnite players who bully others in-game for no real reason.

Watching the video, the help that Joogie gives to ‘Black-Azalea’ is heartwarming and displays that it is not that difficult to help younger players learn to play the game better, and also being welcoming to them being in the game. The two players didn’t take long to turn on the young girl as she was just trying to enjoy the game.

The players started to continuously kill the young girl in the game, playground mode comes with the ability to ‘respawn’, however, all the materials, weapons and ammo collected by the player are dropped on the ground where they died. The players would repeatedly steal the young player’s loot and mock her.

Once Joogie joined in and decided to fight back the players would contradict themselves, asking for their loot to not be taken by Joogie or Azalea.

“Almost 1 in 4 young people have come across racist or hate messages online.”
SPCC

The comments on the video were very much in favour of what the YouTuber was doing and against the bullies. Some comments read “1 like=1 prayer for Azalea to have peace on the playground,” by ‘xXDaBossKingXx PS4′ and, “you are so kind Joogie we need more people like you this is why I’m subscribed,” by ‘Alexis Randazzo’.

EpicGames have a forum where players can share their experiences with the game. One, in particular, is on bullying in playground mode, the last entry was October 2018 by a young player with the username of ‘FlyingTurtles’, he shared his experience with two bullies in the game mode.

His plea for help was as follows: “they started to harass me and my teammate and I thought nothing of it but they kept on persisting and it got to the point where I couldn’t handle it. Me and my teammate never did anything or say anything to them. They called him a “German autistic” and called me a “fat kid” and kept on calling us names. I’ve already reported them in the game I just want this to be seen so bullying can stop.”

A study in 2014 found that one of the top three most common online risks amongst children aged 9-16 is being bullied online. The NSPCC stated, “almost one in four young people has come across racist or hate messages online.”

Stop Bullying had this to say on cyberbullying and online gaming: “Anonymity of players and the use of avatars allow users to create alter-egos or fictional versions of themselves, which is part of the fun of gaming. But, it also allows users to harass, bully, and sometimes gang up on other players, sending or posting negative or hurtful messages and using the game as a tool of harassment.

“Because players are anonymous, they cannot necessarily be held accountable for their behaviour, and their harassment can cause some players to leave games,” explains Stop Bullying on the dangers of anonymity in online gaming.

Ditch the Label in their sixth annual report on bullying, the 2018 survey was completed by almost 15 thousand young people and was “cleansed to remove incomplete and low-quality responses, leaving us with a sample of 9,150.” The report found that 47% of the people that were surveyed had said they had been threatened in an online game. 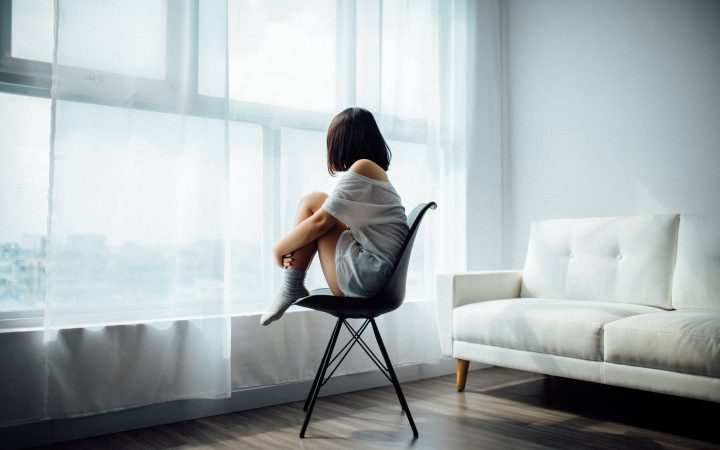 39% of young people didn’t report being bullied because they were afraid it would get worse [Unsplash:Anthony Tran]

Anne Longfield, the children’s commissioner for England, said: “It is worrying that one in five children are experiencing some form of bullying. The impact bullying has on children can be enormous, affecting a child’s confidence, self-esteem, and their mental health.”

Longfield continued: “There should be simple and speedy ways of reporting and taking down bullying content. It is also really important that children are taught how to be responsible online.

“More needs to be done at home and in schools to help those who are the victims of bullying and also, crucially, to prevent children from bullying in the first place. Children who are experiencing bullying need to know that they can approach their parents, teachers or Ditch the Label to talk about what they are experiencing.”

With a game like Fortnite being across so many platforms for people to play it is no wonder that young people are being bullied on it. However, the bullying needs to stop, no video game should be the cause of hatred on impressionable and vulnerable children.

Rifty, a Fortnite streamer, and YouTube creator recently released a video titled ‘Fornite is NOT for little kids’. In the video, he and two other older players mocked a younger player. The video shows how vulnerable these children can really be by asking the young boy to share his social security number with them, which he, in turn, found it out and shared it with them. Obviously for privacy reasons Rifty bleeped out what the young boy revealed.

School is supposed to be a time of life that shapes a young person and helps to prepare them for their futures. They shouldn’t be facing being depressed and anxious, or even wanting to end their lives. because of a hateful person online, it is simply not fair.

“He was distraught over how poorly his friends were treating him”

Vicki Shotbolt, CEO of Parentzone said: “A child who is already feeling disempowered needs warmth and support – parents are uniquely placed to offer that and to guide a plan that not only deals with the problem at hand but also builds resilience and self-esteem.”

Ditch the Label also carried out a survey on in-game abuse in 2017, finding that 57% have been subjected to hate speech in an online game. Liam Hackett, their CEO, said: “This research shows that the issue of bullying and the very real impact it has on enjoyability and mental health is significant and impacts the majority of users.

“We will be working with our partners, in light of these findings towards a gaming community that is truly accepting and welcoming to all users. Our efforts are largely about redefining gaming culture and modelling the appropriate behaviours that young people should be exhibiting online.”

Kate Seldman wrote an article for Your Teen Mag about her son being bullied on ‘playground mode’ in Fornite. In the article, she spoke first hand about her sons’ feelings and experiences with the game.

“According to my son, these kids deliberately targeted him. When he complained about being killed, they laughed and killed him again. When he got angry, they used the game’s ‘kick’ option to eject him from their team,” she claimed. “This sounded a little ridiculous when he relayed it to me, but his distress made it serious. He was distraught over how poorly his friends were treating him, and when he stood up for himself, they refused to listen.”

Bullying both in real life online is still a major threat to the youth of today. With the age of the internet, it is now easier than ever to be exposed to hate from strangers. We need to take a stand against bullies and stop young people being damaged by the senseless actions of one person.

If you are being bullied or know someone who is, please seek help from an adult or friend. Speaking out is not easy at first, but will help in the long run. The national bullying helpline: 0845 22 55 787